Chuusotsu! 1st Graduation: Time After Time seems like a purely lighthearted visual novel at first. You start the game by following Arue, as she moves into a small apartment with two other girls under a special program where you can live together without rent. You are told to complete a task together – to find an answer to the question ‘What makes a wonderful life?’

This visual novel by Studio Beast is available on Steam (PC) and Itch.io (PC) and no other platforms at the current time. The localization was funded by Kickstarter and published by Fruitbat Factory.

There is no adult content in the images of this game, but the story does have some references to sexual content. There are mentions of the adult industry and a couple of references to sex toys. The game is not a romance story but does contain some hints of romance between girls, as well as a lesbian couple with sex on the mind as side characters.

This is a very difficult game to pin down a genre for. It deals with some very serious topics including some rather dark ones at times. It includes quite a lot of comedy based around the characters, but it can get quite depressing at times too. It’s a commentary on society and deals with discrimination, while still being a funny story where girls read manga, go to the arcade and eat snacks. 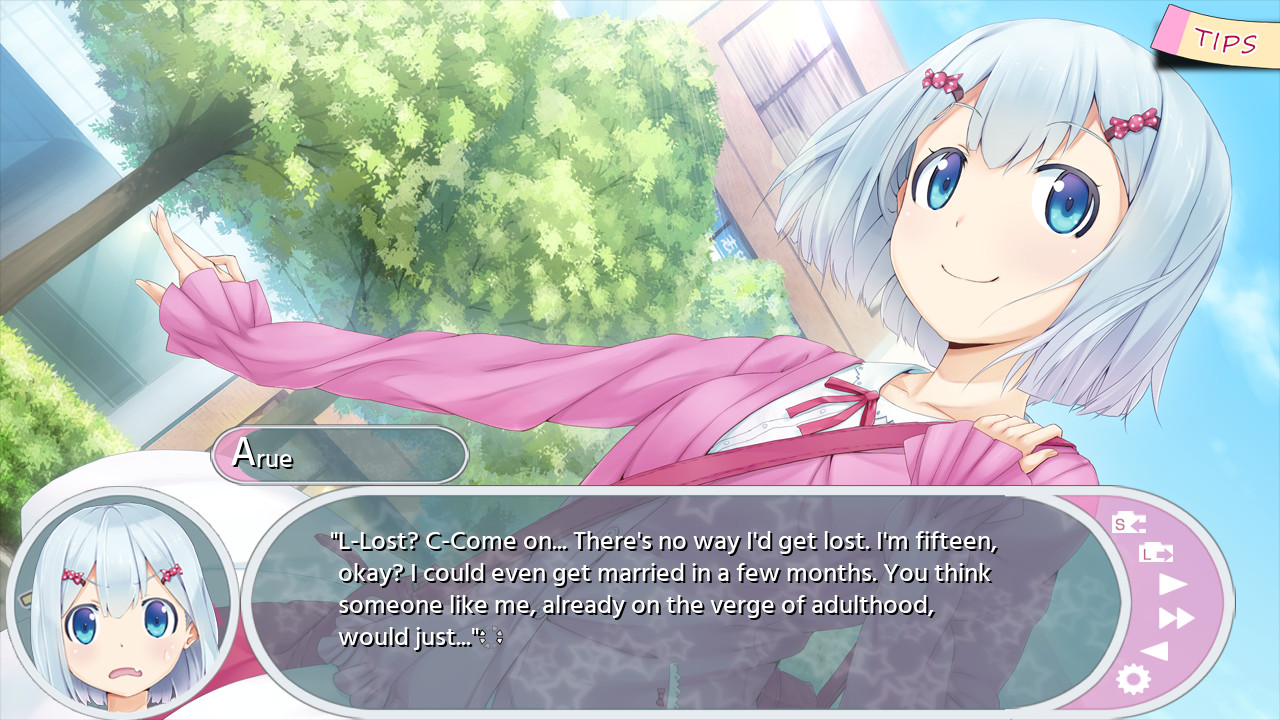 While it’s always in the background, this story could be called science fiction. The society works on a concept called Authorization Seals, which are issued by the government and work through nanomachines. This government controls the entire planet. Everyone takes examinations. They are then issued a job best suited to them based on the result. They are given seals which boost their physical and mental abilities in relation to their position, whether it is a student, a sewer worker, a Government employee or a housewife. Some seals are notably more powerful than others and include special abilities.

As jobs are assigned based on ability, this nearly eliminates unemployment. Of course, it also removes any chance of freely choosing of career too. Refusing to do your job, committing crimes or going against the government in any way risks the loss of your seal.

All of the girls are ‘Chuusotsu’. They have failed the exam and have no education beyond middle school. The girls have their various reasons why, but they have all fallen into this. They have no seal at all. Society looks down on them. They have problems dealing with more than the simplest tasks due to the lack of the seal. While it is not directly stated, it seems to be to the point that the lack of seal actually limits their abilities to below the human norm. Even simple tasks such as two-digit addition are beyond their reach.

The story makes it clear that there are very few options for Chuusotsu girls and that legal prostitution is a common one. Another is to try to get by with part-time jobs, but this is often difficult. It is possible to retake the examination to get life back on track, but this has an incredibly low success rate. 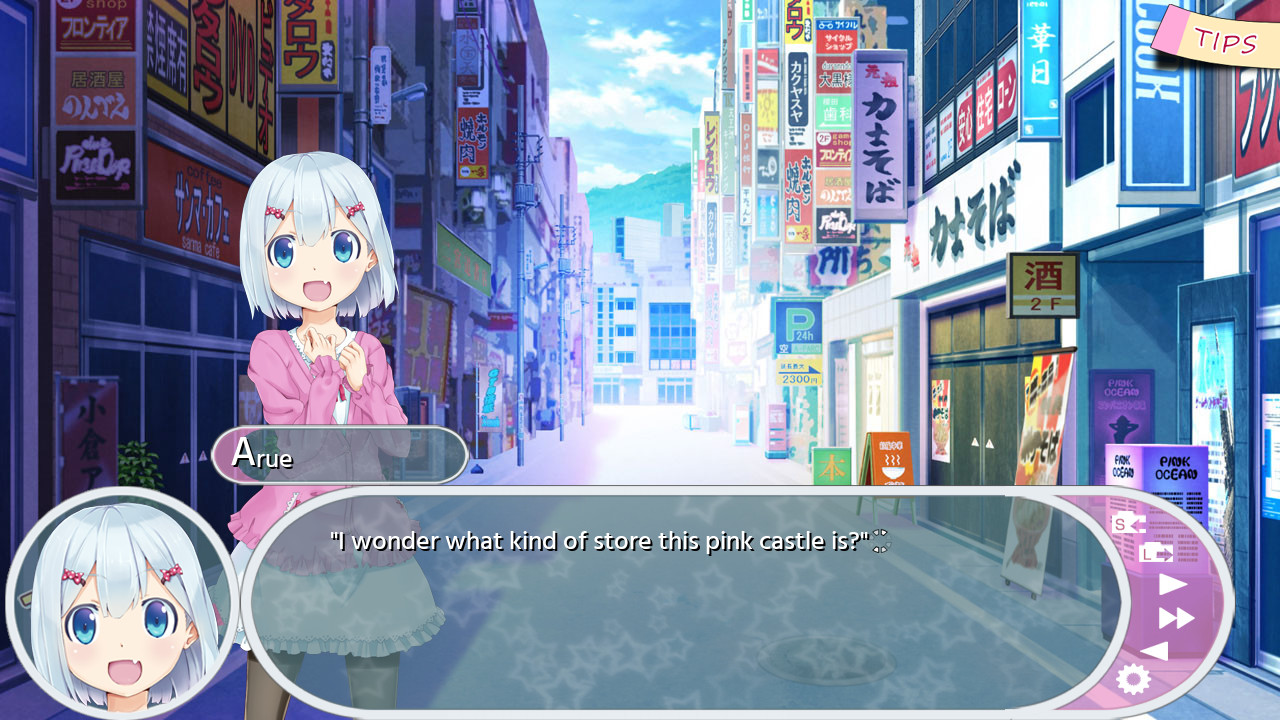 Overall, I enjoyed the story. At first, I thought it was good, but it took until an unexpected event happened until I really got into it. The concept is really interesting. There are certain areas where it could be fleshed out or explained more, but it works very well as a setting. Ideas are explored in a way that often keeps things light and amusing but hints at some horrible things about this world. It managed to add in some science fiction elements such as holograms, artificial suns and more while still keeping the story world seeming not too different from our own.

The story mostly focuses on the three chuusotsu girls and the interactions between them. Each of them has their own issues relating to other people, which can cause friction and quite a bit of amusement for the reader.

Arue Marisugawa is the main character of the story. Her goal is to retake the examination to get her life back on track. She was hospitalized when she was younger, as well as having other issues. This is what caused her to fail the exam originally. She lived in poverty with her mother and brother until moving into the apartment and wants to help them. She has poor interpersonal skills and can be quite harsh to others at times. That said, she is harsh to herself too, saying that she is human debris and similar. She loves manga and even creates them herself.

There is quite a lot more than I have stated to Arue’s character. This gets explored later in the story.

Arara Fujisaki lives in her own world, in which she is the destined savior. She believes that an evil boss called the World Dominator rules the world from the shadows. Her goal is to send him back to hell. She is what’s known as a chuunibyou, having delusions that she is above others and has secret knowledge. Delusions aside, you do find that she does have some hidden talents. She attaches herself closely to Arue.

Koiro Hachisuka is probably the closest of the girls to normal. She is quite a naive girl in many ways and follows the teachings of her mysterious trainer. She is a calm and kind girl but has been seen to use her surprising strength in defense of others. 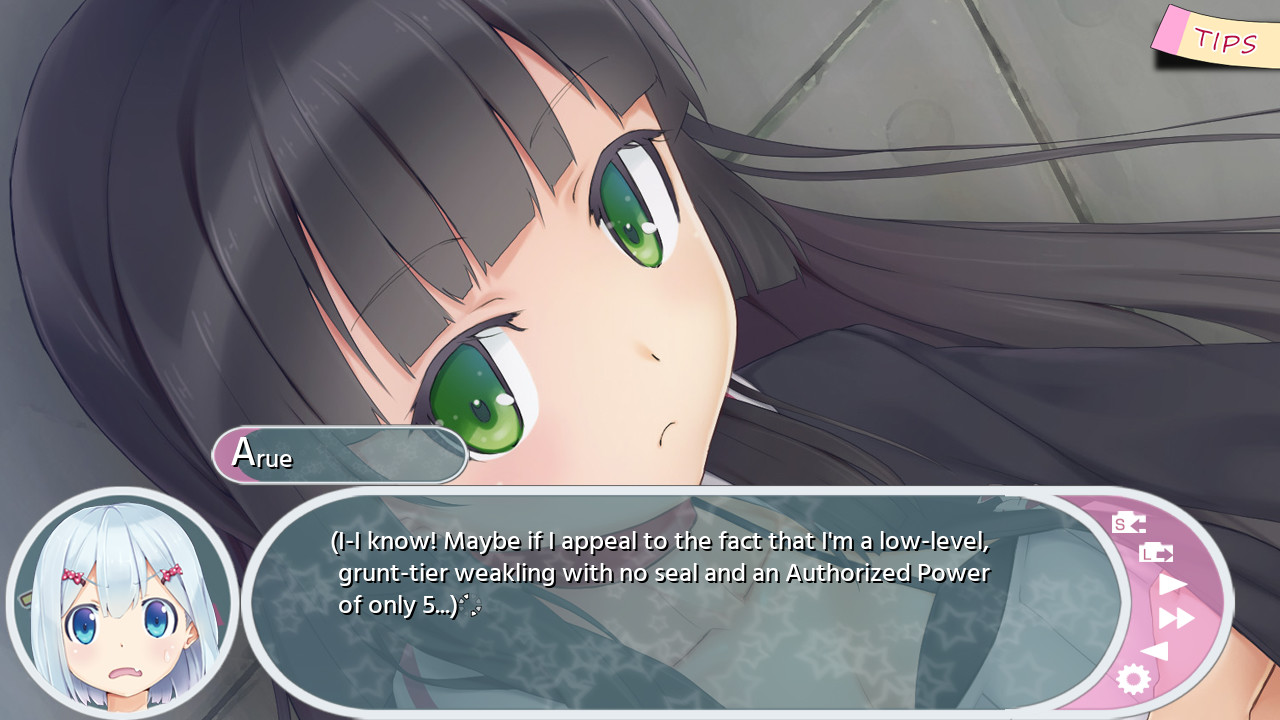 All of the girls could be seen as airheads, as is true of all chuusotsu. They are easily distracted by fun things and find it difficult to concentrate on anything outside of their obsessions. The story mostly explores Arue’s backstory and motivations. It does this well, giving her quite a lot of depth. Unfortunately the same isn’t true of Arara and Koiro. Some aspects of both are left unexplored. I was left with quite a few questions about their backstory and more.

The interactions between the girls are hilarious at times. Particularly Arue who tries to control the group and move it towards their goal and Arara who is more interested in chasing the World Dominator. Koiro tries to moderate at times, to limited success.

This is a kinetic novel, meaning there are no choices or branches. The only content outside of the main story is an additional scenario hidden away in the options. It’s just a short bonus scene about a background character which is very short. In total, it took me approximately seven hours to complete all of the game content.

The quality of the editing is high. I did not notice any issues with typos, misspellings, grammar or formatting issues. As these commonly occur in visual novels, this is quite impressive.

I feel like visuals are well done, though the character sprites might not be to everyone’s taste. They are however detailed, as are the backgrounds and the CGs. The resolution is limited to 1280×720.

There is a nice mixture of background music which works well to set the mood.

The options are fairly basic visual novel options. Aside from a glossary feature and having both English and Japanese language, there are not any notable extra features here. It is worth noting that the auto works well. Unlike some other visual novels, it takes into account how long the sentence is before skipping. 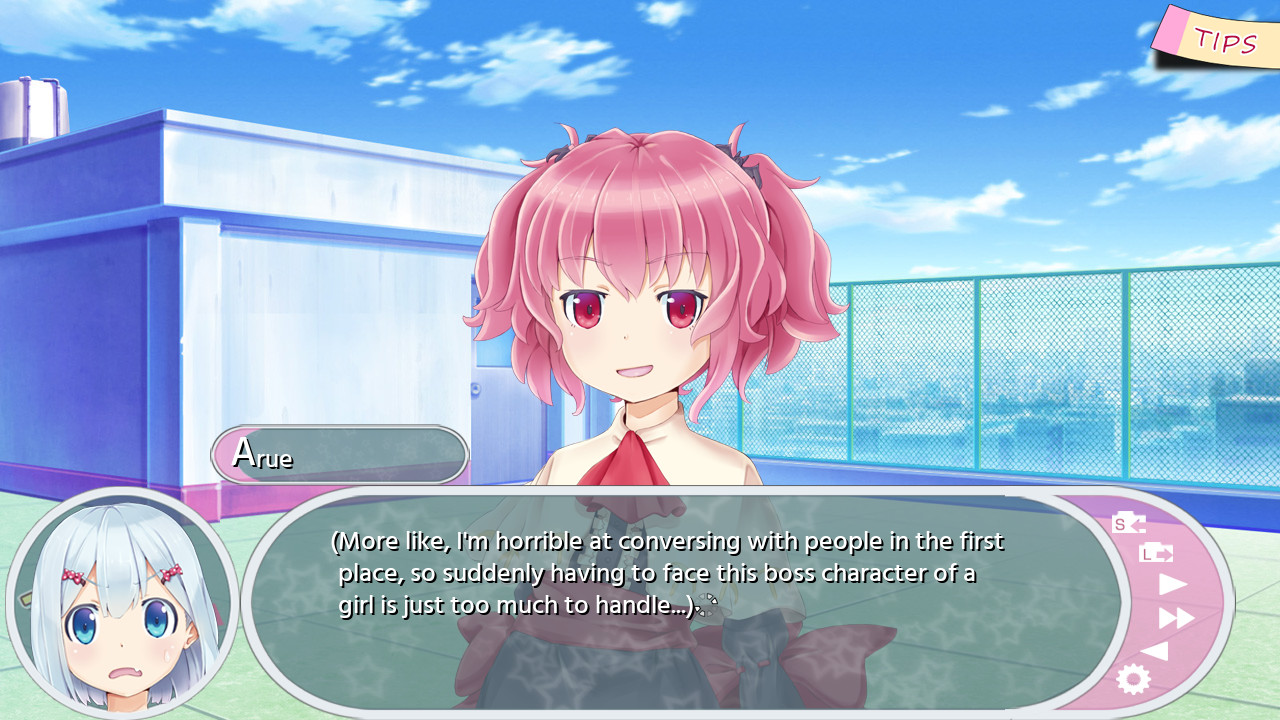 The setting was particularly unique and I’d love to see it explored more. The friendship between the three girls, particularly Arue and Arara was great too. The story has a few interesting twists in and I particularly liked the ending, which in some ways was built up to, but still managed to blindside me with the specific event.

The only real negative to this visual novel is that it’s too short. I’d love to see further installments with sections exploring more about Arara and Koiro, as well as certain aspects of the setting.

I’d certainly recommend the game to any visual novel fans who enjoy comedy and unique settings. It’s certainly not just the standard romance in a school visual novel, as much as I enjoy those too. It raises questions and makes you think about the issues with this society.

The game can be bought here on Steam and for a slightly lower base price here on Itch.io.

Thank you to Fruitbat Factory for providing a review code for the game.