Under One Wing explores the concept of a world where there was a huge surplus of airplanes after the war. So many in fact, that they were repurposed for civilian use and have become common enough that even students can afford to buy them with a part-time job and some saving.

This is a world where schools, malls, and dormitories have landing strips. Where a student can decide to go pick up some soy sauce by taking a flight to the local convenience store, instead of walking or driving.

In this world, the main sport is fairy fighting. These are basically mock battles in airplanes, using mock ammo and sensors to detect when an airplane should be shot down if it were real.
You as the main character, are the grandson of one of the most well-known fairy fighters of the past. Your grandmother has passed her famous plane, the Shinden, down to you and sent you to live in a dorm that she owns. Of course, no-one mentions that the other tenants are all women. 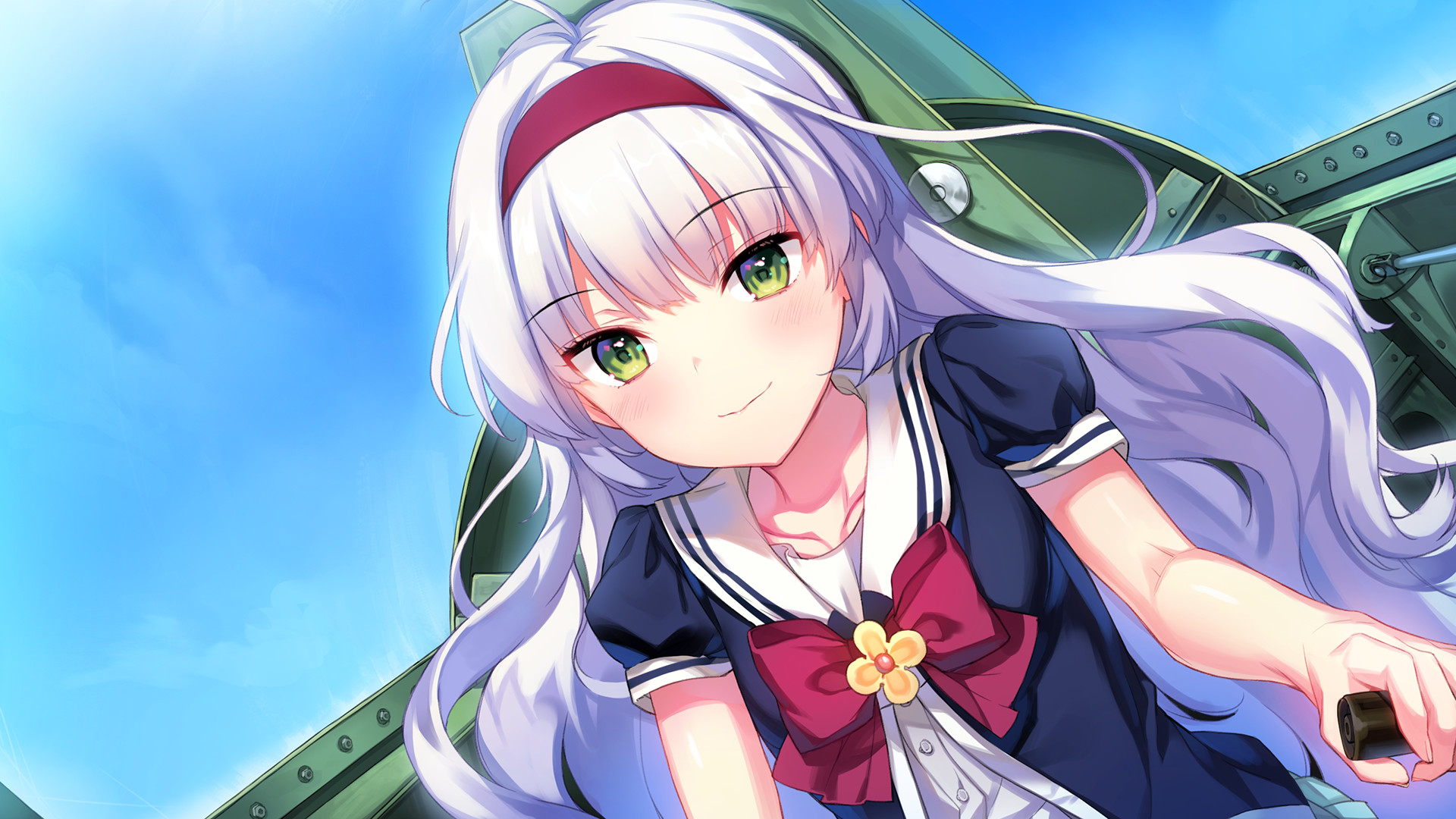 The story itself follows you as you get to know the residents of the dormitory, go through school life and learn more about flying. As the story continues, you get to know the characters and start to find your sense of purpose, which you had previously lost.

Generally, the story is kept in front with a lot of jokes from the characters to help keep things interesting. The main character is painted as a mild pervert at times, but it never really gets to the point that it’s more than for comedic effect.

One interesting aspect of the game is that it dots airplane facts throughout. Through the game, you might find yourself learning a few new things.

One big aspect of the story is the fairy fights. These are popular to the point that there are several school clubs dedicated to them and your character becomes drawn in. Throughout the story, there are a number of fight scenes. I found that these were all done well. They were described well enough that they could easily be imagined, which was a pleasant surprise as often fight scenes are skimped on. 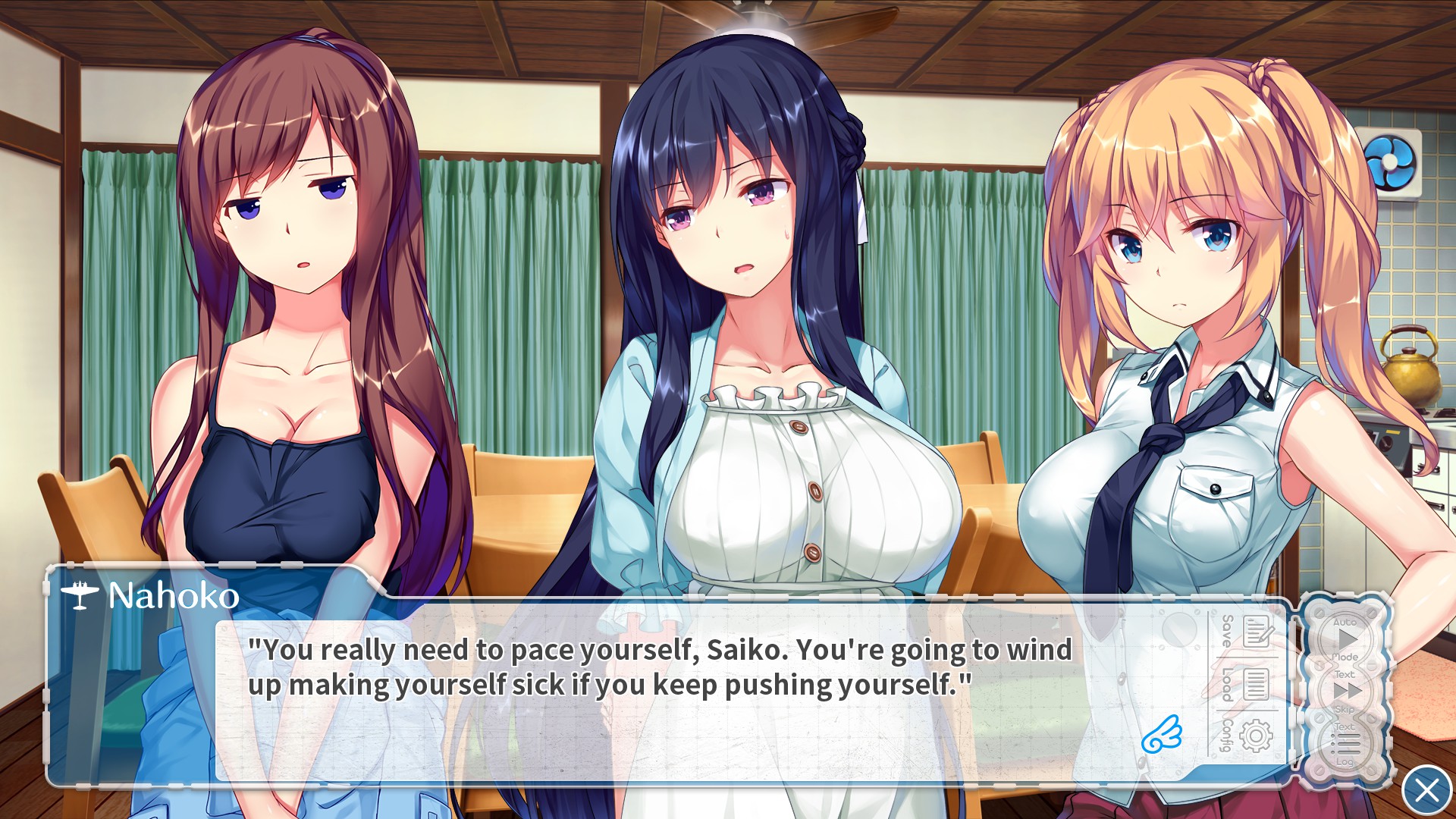 There are four characters with routes in this game. Each pilot in the dormitory has their own route, but all of the characters make appearances even in the other routes. All routes follow the same basic events but change based on whom you spend your time with.

The first girl whom you meet is the hyper and bouncy Hikari Hirosawa. She is a font of airplane facts and saying that she is obsessed with airplanes would be more accurate than saying she is interested. You meet her as she flies dangerously close to check out your rare airplane.

Next, you meet Nahoko Jino. She is the student council president and knows your grandmother. She acts as the caretaker of the dormitory and seems to be reliable, but doesn’t mind manipulating the situation for her own amusement or benefit.

Next up is Kazusa Sasaki. You don’t get off to the best start with her, but you find out that she is quite fair, even if quick to anger at times. She is an airhead with some minor tsundere tendencies but is very considerate towards other people.

The final pilot is the mysterious Mimari Matsumoto. She is described as doll-like. She is rich enough to pull out a card and outright buy a Spitfire but keeps her background hidden. She can be a little difficult to understand as she often leaves out context and details when speaking.

While she does not have a route, another resident of the dorm is Saiko Kariyama. She is Nahoko’s friend, a fellow student and enjoys acting as the engineer. She often enjoys teasing the other residents, while keeping the airplanes in top shape.

There are a number of other characters, including friends and family of those already named. The above mentioned are those living in the dorm and who you most often encounter.

I personally took about seven hours to complete a single route including the common route and one character route, but each girl’s individual route took about two hours, bringing it up to a total of thirteen hours to see all content.

I found all of the routes enjoyable but personally found Mimari’s to be the best, followed by Kazusa’s. All the characters had a fair amount of backstory and depth to them, which was explored in their own route. That said, Hikari’s was a bit light on it and some parts would make less sense if Kazusa’s route was not played first. All other routes were independent and can be played in any order without issue.

It is worth noting that the game has several choices throughout. Aside from the final choice, none of these seem to have any impact on which routes you can access. I personally played through the common route choosing whichever option I liked, saved at the final choice and loaded after completing the character route to choose another.

The writing itself is well done, with a few minor issues in spelling. Due to the high standard throughout the majority of the writing, I felt these were forgivable. As mentioned, the fights stood out as particularly well written.

I found that the artwork is all to a very high standard and there is a good amount of CGs. The music is well done too with 21 tracks providing a good variety.

There is a fully featured options menu. You can choose which characters are voiced, turn honorifics on or off as you wish and so on.

If you are buying this game on Steam, it is worth noting that a lot of the mature content has been cut. The mature content itself is fairly standard stuff for the most part, with a couple of mild fetish scenes. The content can be restored with the free 18+ patch. This patch can be found at https://pantypress.com. All mature CGs were uncensored.

I would personally recommend Under One Wing to visual novel fans who enjoy games with a focus on story but don’t mind the odd lewd joke. The cast of characters is quite interesting and is what makes the story worth reading.

You can buy the game on Steam or here from Denpasoft.

Purchases made by Denpasoft links earn a small commission which goes to help supporting domain and server costs.

2 thoughts on “Under One Wing – Review”