Memories on the Shoreline is an original English language visual novel and the latest one created by Crystal Game Works. Their stated specialty is games with themes of both fantasy and romance and this title is no different.

Unlike many visual novels that take place in Japan or a fantasy world of some sort, the setting here is slightly more grounded – a seaside town in Florida, USA. Admittedly though, this little holiday getaway does have a hidden side to it.

As a warning, unlike many visual novels I review, this is an Otome game. For those who have not heard the term before, it generally boils down to being targeted towards women and often involves the female main character developing relationships with male characters. 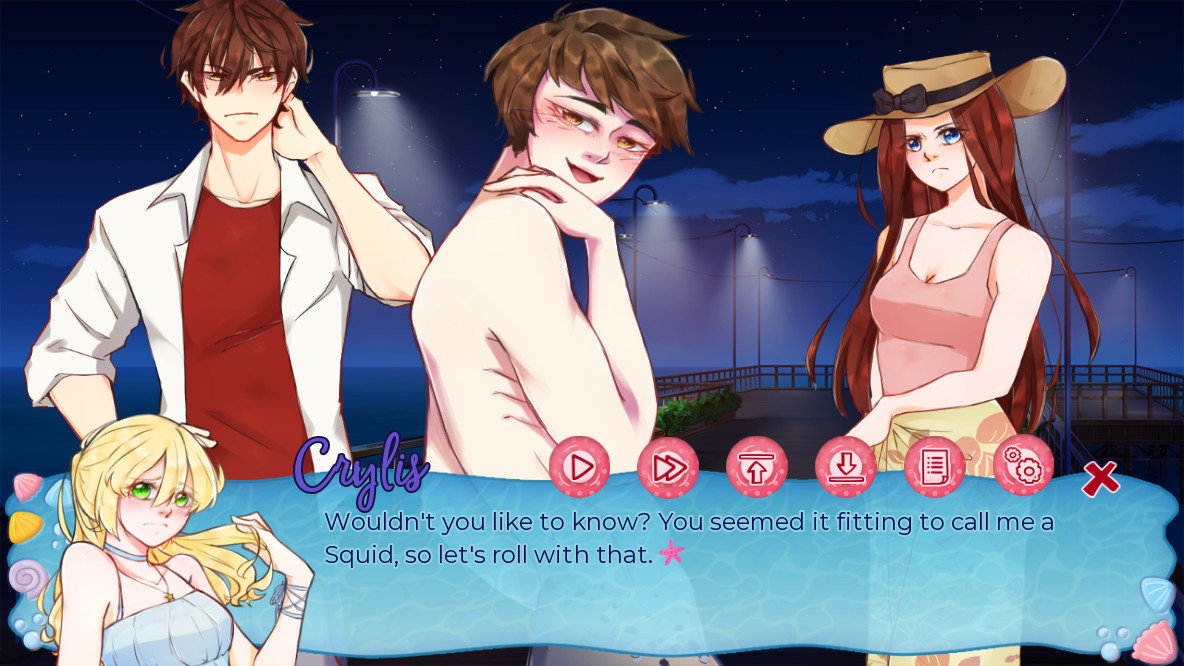 The story opens with our main character Melody, having just arrived with her friend Shion. The somewhat impulse Melody has booked them onto a short break to take a rest from her study.

This is where we come across Brennan in a fight with a mysterious figure. This turns out to be Crylis, a mermaid. We learn that there is a community of mermaids nearby and that they sometimes appear. In this world, mermaids have a number of special powers, including the ability to form legs and to walk on land.

This essentially sums up the opening of the story. From thereon it explores the lives of Brennan and Crylis, with some diving into their history and the world of mermaids. This is a rather casual romance, with a touch of drama. I would say that it is mostly character-focused and mostly involves following the four characters through regular events of life, rather than the fantastic. Generally, the tone is kept reasonably light, despite covering a few darker topics. 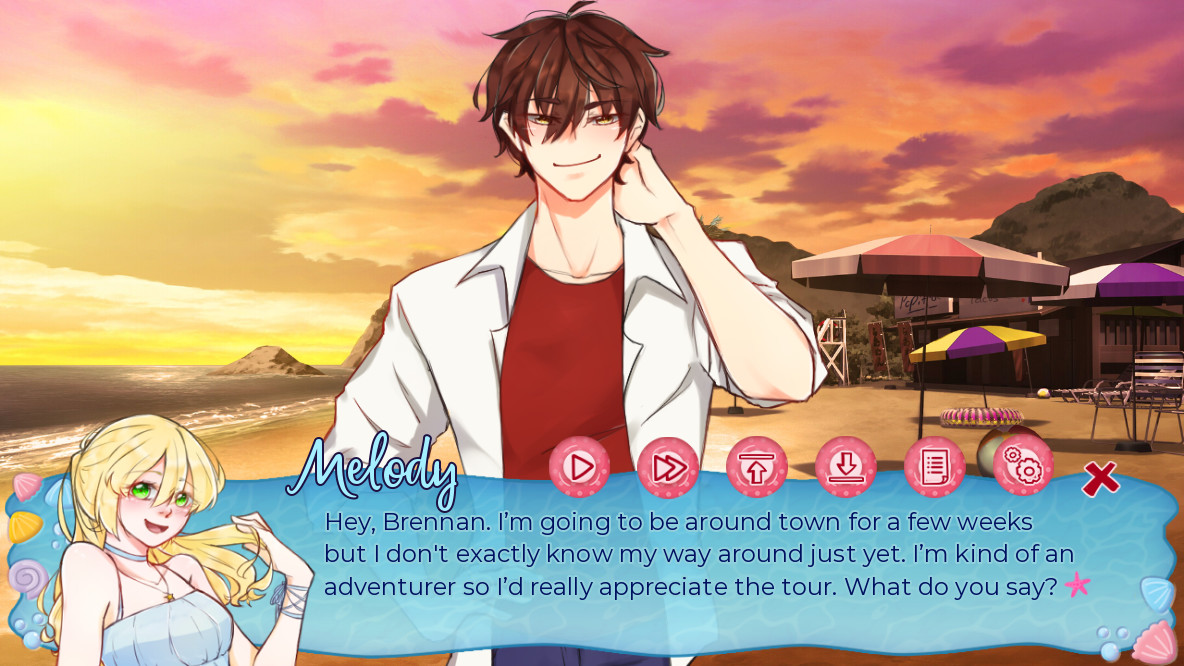 The story involves quite a few choices. While some scenes are reused, there are two paths where the reader will see mostly different content if the obvious choices are taken. These split into five different endings. I was quite pleased with the effect the choices had, as they all had a real purpose. I always like being able to influence the story and to see that influence directly is great, rather than on a hidden point system that only shows the result at the end.

I did feel like the endings were quite sudden in a way. The build-up was certainly there, but I would have appreciated a little more to them and how the story closed for some of the endings.

The characters were quite interesting, I thought. We have Melody and Shion who are childhood friends but appear to be opposites. Melody is the positive outgoing adventurer, while Shion is more reserved and can be quite harsh. On the male side, we have Brennan and Crylis. Brennan is confident to the point of arrogance and can act rather negatively, but he has his redeeming qualities. Crylis lacks social skills and a full understanding of human society, but he act well at times. Both of them have secrets in their past for the reader to unlock. 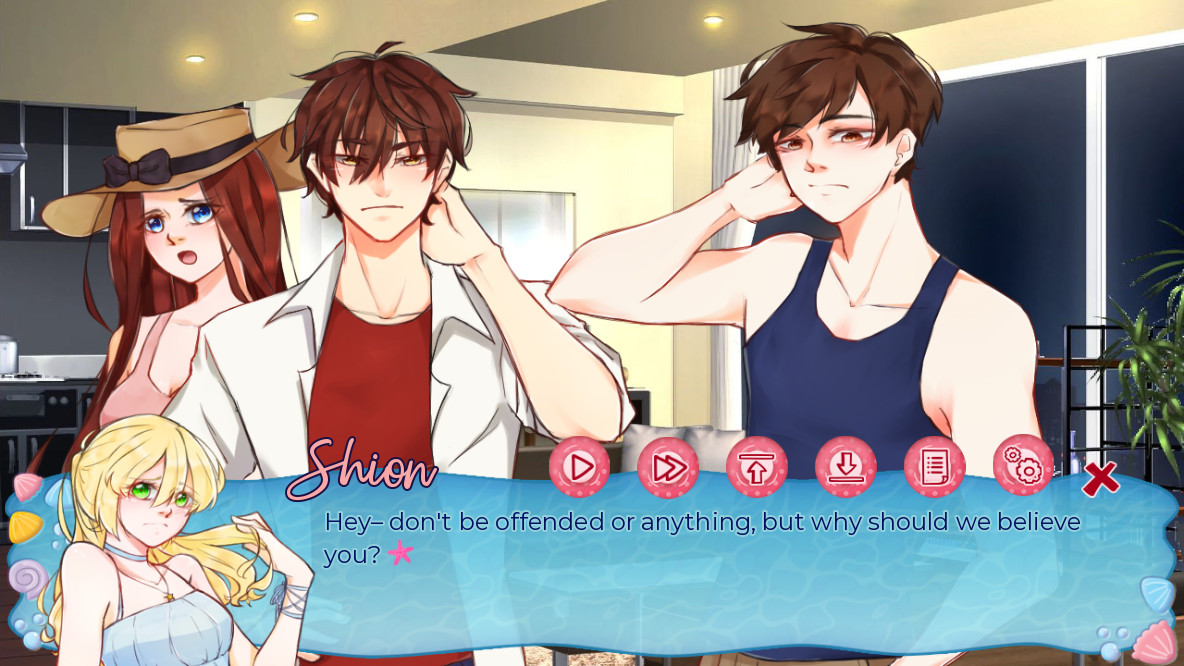 I personally took slightly over one hour to complete a single playthrough of the story, but I am quite a fast reader. To get the multiple endings and see all of the content took approximately two hours in total, using skip to bypass the previously read content. It is quite a short visual novel, but considering that it hovers around the $5 mark, that is to be expected.

The sound is an issue and once again, I think this is likely down to budget. The music included is fine and fitting, but rather limited in variety. Some scenes are completely silent. Sound effects are very minimal too. There is no voice acting at all. I do think that improvements in this area could really bring the story to life more.

As visual novels do have the reputation, is it worth noting that this contains no scenes of an adult nature. I wouldn’t say this is completely family-friendly due to a couple of adult jokes – I suppose being water-themed they had to add in the joke about being wet somewhere. I would suggest that it is suitable for teens. 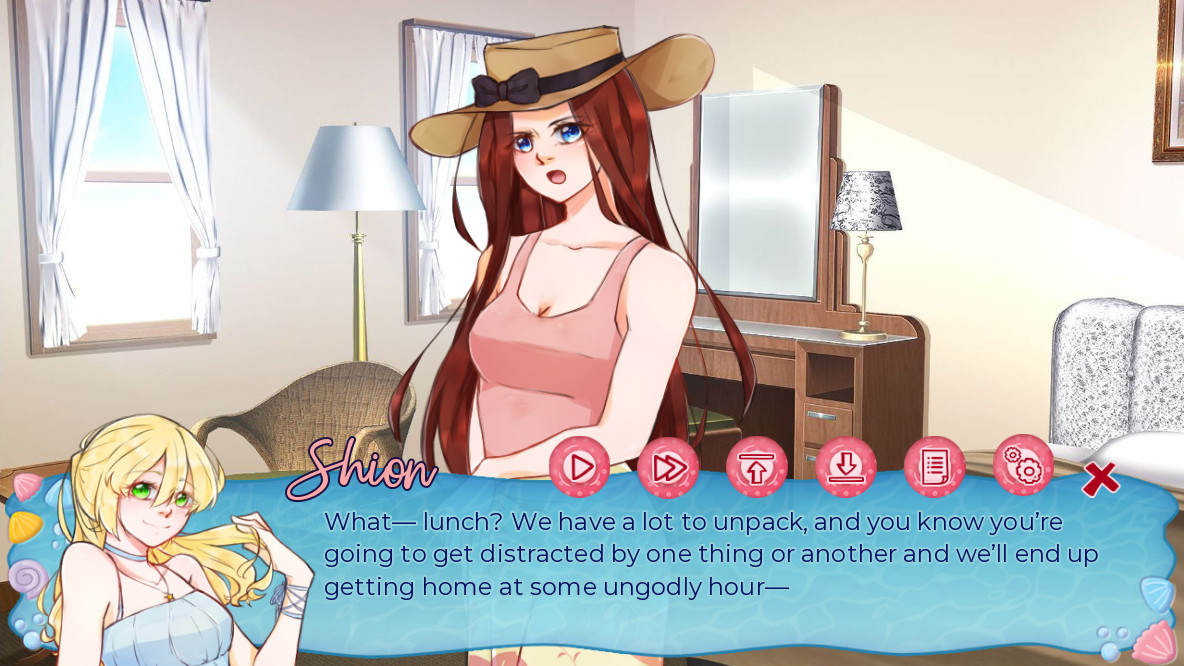 While I have mentioned my issues with a couple of parts, it was interesting to read through Memories on the Shoreline. It was a short taster of a genre I don’t often experience and kept me reading throughout. I do think that it would be interesting to see what Crystal Game Works could do with a larger budget and if you like the idea of a short but budget-priced Otome visual novel, supporting them with this title would be a good way to ensure that happens in the future.

This game can be found here on Steam. In addition, you can further games by Crystal Game Works here including two free games.

Many thanks go to Crystal Game Works for the review code.

We are going Max Mode on this, so grab yourself some paper, pen and a pinch of drama so we can go straight into our review of Root Letter: Last Answer, a visual novel developed by Kadokawa Games. This game was initially published in 2016 – 2017 for the PS Vita, PlayStation 4, PC, Android, […]