DEEMO -Reborn- is primarily a rhythm game where you play the piano to progress. Unlike many recent games, DEEMO as a series focuses mostly on relaxing and more traditional styles of music, rather than pop or rock. This is mostly by Japanese or Taiwanese artists.

I say that it is primarily a rhythm game, as there is also a puzzle element to the game. Outside of playing songs, the player will find themselves searching for secrets and finding ways to unlock new music and areas.

The game with the features described here can only be purchased on PlayStation 4, but it is worth noting that there are other versions of the game on Nintendo Switch and mobile platforms. This review is mostly focusing on my experience playing the game on the PSVR, but it is important to note that this game can be played both in VR mode and in TV mode, which does not require a VR headset or motion controllers. As a bonus, you can even switch between them mid-game.

The story here is told through a small number of cutscenes that unlock as you fulfill certain conditions. The premise is that you have Deemo, a pianist who lives in the tower. A young girl suddenly falls from a window high up and Deemo saves her. Soon after, a budding tree is found. This tree is found to grow taller and taller as music is played. The girl wants the tree to grow tall enough that she can reach the window and leave the tower. While further story is explained and hints can be found in the environment and from dialogue, this sets up the reason for the gameplay, which is about finding music and playing it to grow the tree.

First I’ll explain the main feature – the rhythm aspect of the game. You choose from your books of songs and as you unlock them, there are tons to choose from. You set a difficulty mode and enter a realm where notes start flying towards you.

The basic idea is to hit the notes flying towards you as they reach the line. The note will light up (or not if missed) depending on how close to the line you hit it. A hit right on the line will glow multicolor, but a very close to the line hit will glow orange which is much more common to see. Both of these count as ‘Charming Hits’. Hits further away are green, blue or purple, depending on the distance.

While hitting each key perfectly is ideal, fortunately, the game is more realistic than that. The scoring is done based on how many hits and the type of hits. You can also strive for full charming (multicolor or orange) or full combo (multicolor, orange, green or blue).

As well as the standard black and white notes, there are swipe notes where you need to do a classic hand swipe across the piano keys. In harder levels this can involve switching hands between swiping and playing notes quickly and often. 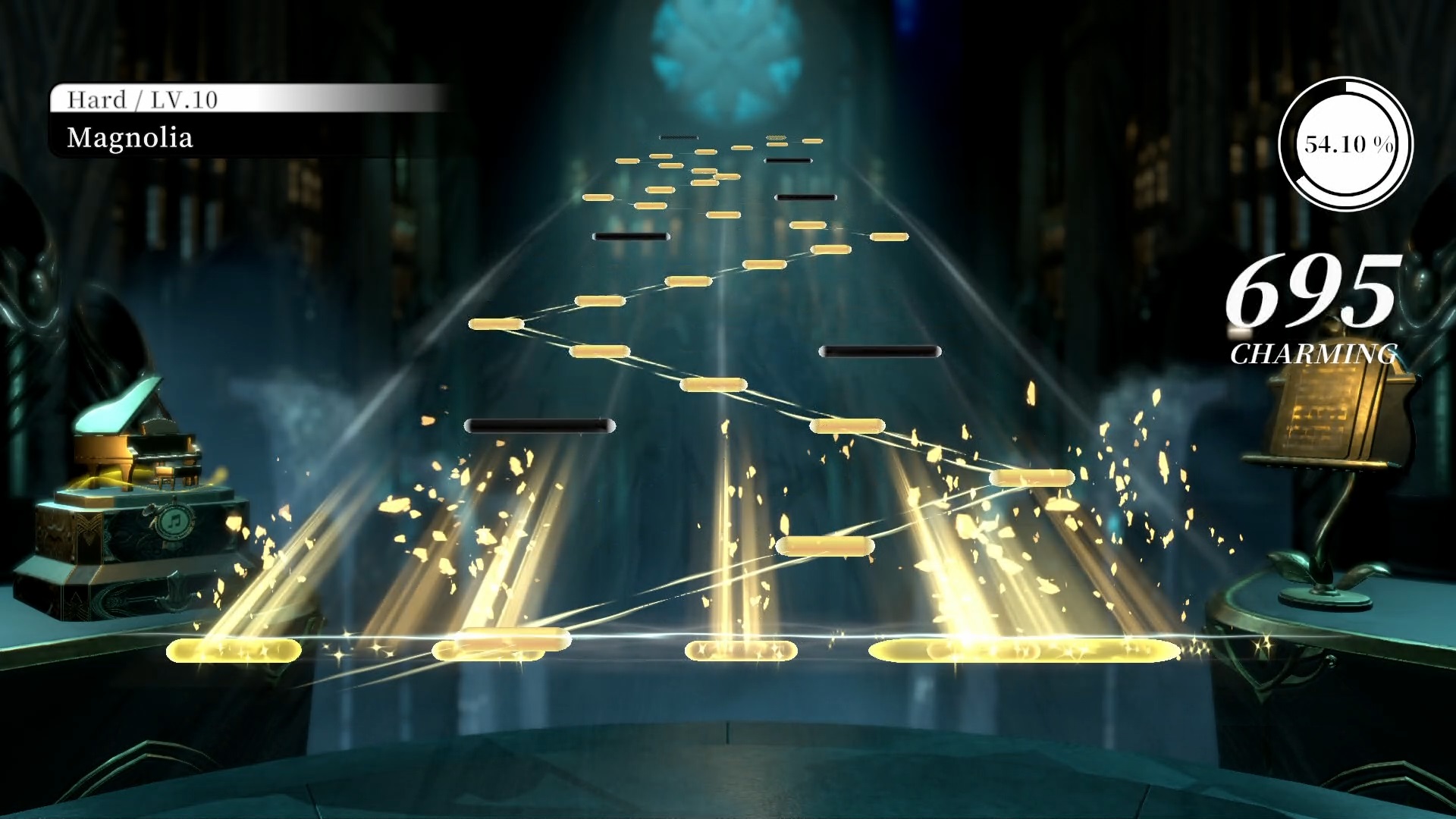 If you are playing in TV mode, you can press a button on the controller to hit the note. For simple songs, I found this fairly easy and probably the best way of completing a song accurately. When adding in more advanced songs however, this became much more difficult. I found it crazily difficult to keep up with the buttons and the moments where you swipe your hand across the keys added in further difficulty – it’s not really intuitive either to use the left analog stick suddenly to swipe, particularly while still needing to press buttons simultaneously. You can see some TV mode gameplay here.

I found playing in VR mode much easier, even when going to higher difficulties. This was quite surprising to find as often it is the opposite. In VR mode you use the move controllers to tap on the piano keys in the correct place at the correct time. Both keeping up with the speed and swiping seemed to be much easier, or at least in my opinion. There were some nice extra touches too, like a short vibration from the controller for each hit on the piano keys to give you some feedback. You can see some VR mode gameplay here.

I mentioned playing music to grow the tree before. It is worth noting that playing new songs will add more growth to the tree. This includes difficulties that have not been played before. This is where something rather unfortunate is easily noticed; TV mode has three difficulties to play, easy, normal and hard while VR mode only has two difficulties, easy and hard. This is both unfortunately as it seems like it may impact the difficulty of growing the tree, but also as VR feels like the best way to play but has cut content. Oddly enough non-VR players may have something to complain about too – it seems to count non-VR and VR music separately, at least from the icons. It may be that VR players could play both VR and TV modes to grow their tree more quickly. 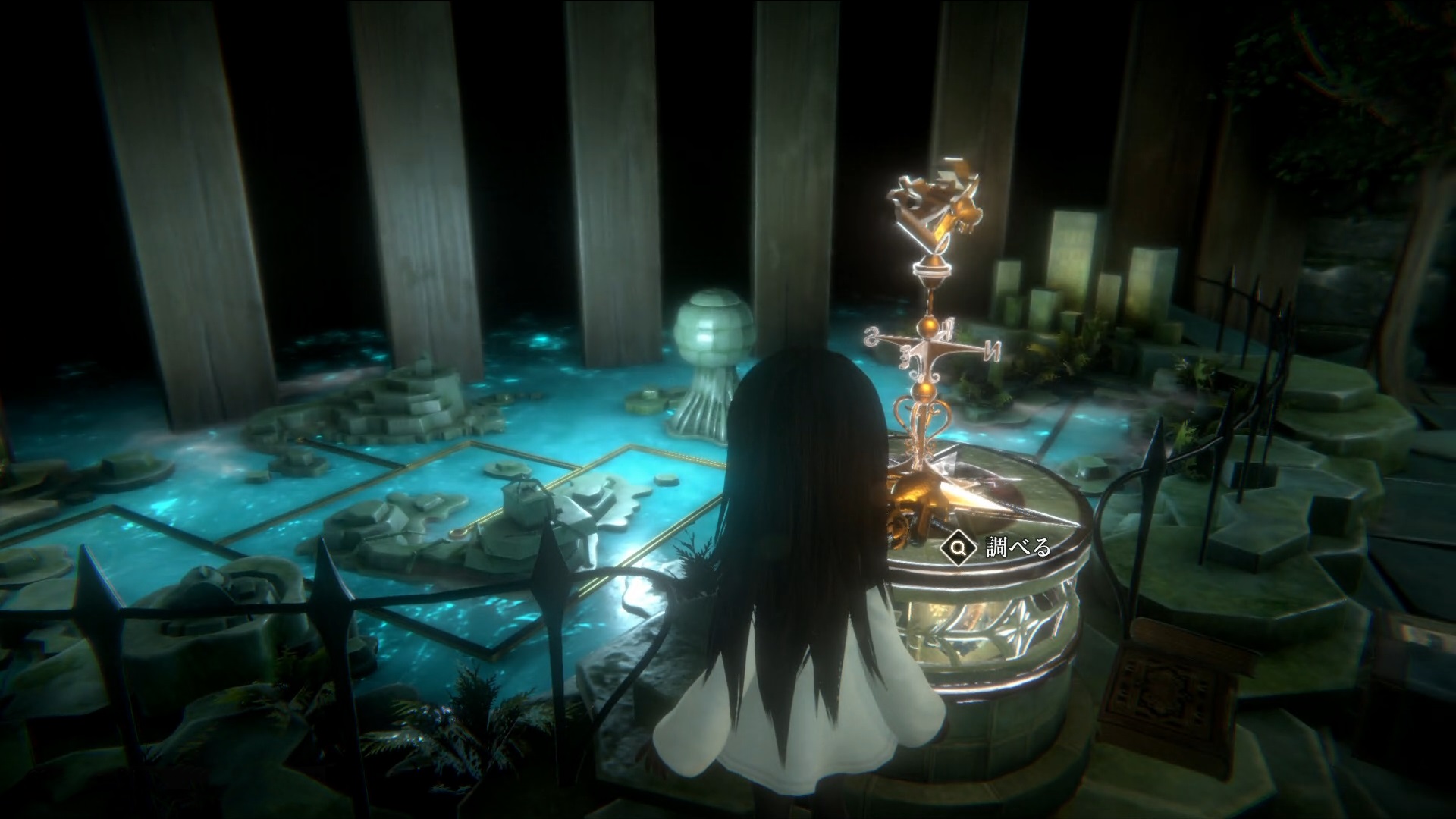 Moving onto the puzzle aspect of the gameplay, you control the girl as she moves around. You start off in one room, but as you progress you can unlock more. As you move around the environment you can interact with objects. This can be as simple as picking up new sheets of music to play to pulling out books and reading through them or moving around parts of an item to create the correct pattern. Many of the puzzles involve hidden items or figuring out a pattern. Some can be quite complex and require careful observation of the area, whereas some are more a case of interacting with everything until it works.

One thing I did find slightly annoying about the puzzles is that some could not be solved until the tree had grown a certain amount or certain events had happened. There is not any indication of this until it happens, so you can be searching for quite a while for the solution but be unable to access it.

While I wasn’t a huge fan of the puzzle aspect, I did find that it works nicely as a palate cleanser and it helped as part of telling the story. It was a good chance to explore the tower and see the world outside of cutscenes. It nicely broke up the rhythm sections and stopped me from getting burned out too. 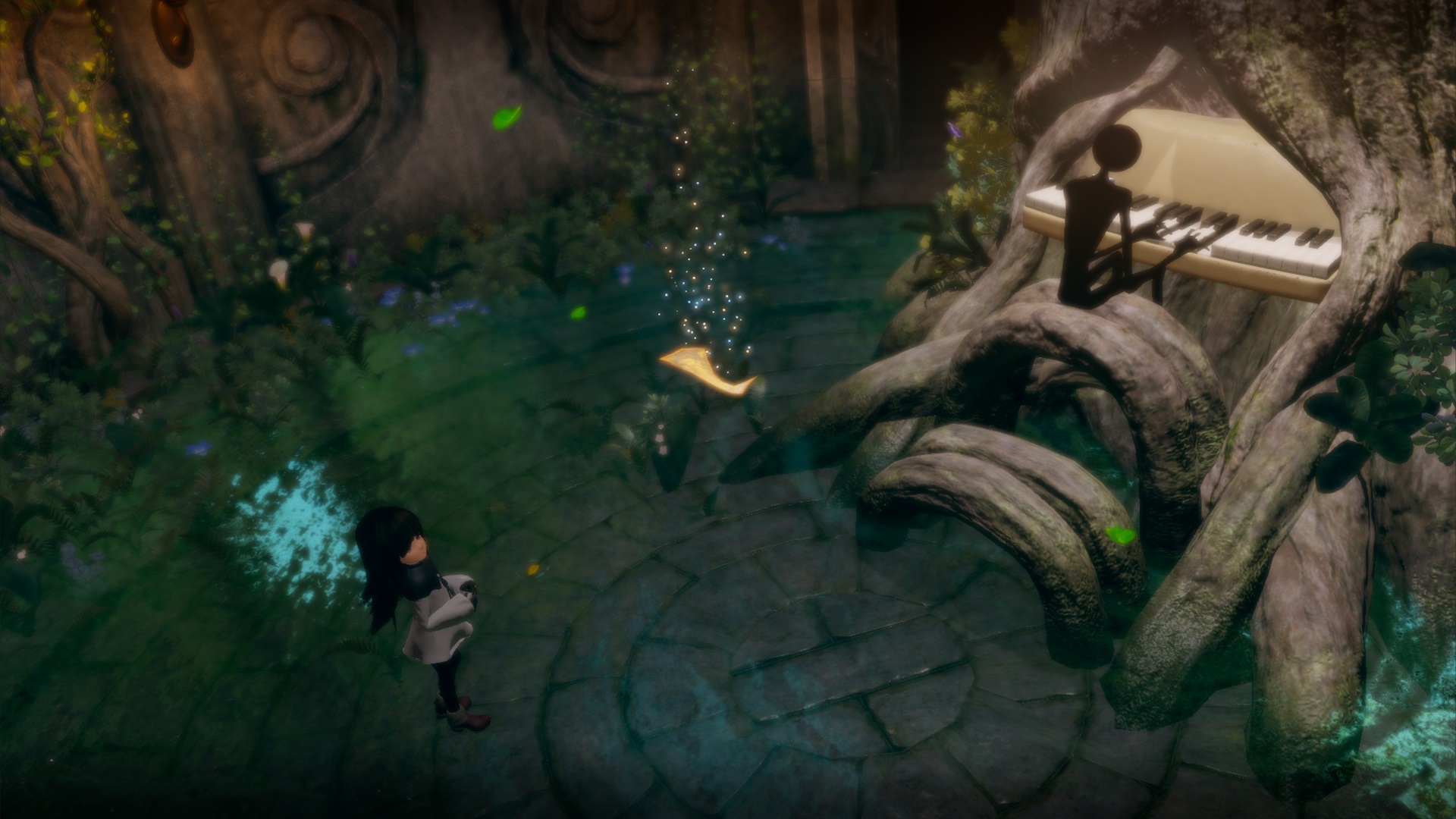 I found that the graphics of the game are done quite well for a PSVR-enabled game. Otherwise they are good, but not outstanding looks-wise. The animation was done well though and included quite a few nice touches like Deemo reading a book, then looking up and following you with his head when you get closer

The sound quality is great throughout as would be expected of a rhythm game. There is a huge variety of music as it is the focus. The characters are voiced in Japanese and while they do not have many lines, they are voiced well.

While I cannot comment definitively at this point in time, it looks like there will be further music via DLC. There is a section for the store in-game, but due to playing and reviewing this title prerelease, I cannot check it.

I did not come across any serious issues. I did find that I had to set my PSVR camera high and sit quite far back to ensure there were no tracking issues with hitting the edges of the piano. After adjusting this worked absolutely fine. Occasional pathfinding issues and the loading times being slightly long are the only other issues I noticed.

Overall, this is a great rhythm game with some decent puzzling sections – that is if you are playing in VR. I did find that the control scheme was a big issue on the DualShock controller, but with PS Moves it worked perfectly. I’d certainly recommend it to VR players, despite the content issues mentioned above. For players using the TV and a DualShock controller, I’d see if it is possible to try and see if the controller scheme suits beforehand.

You can buy the game on the PlayStation Store.

Many thanks to Unties for providing a prerelease version of the game.

All Games All Posts

I recently had the opportunity to attend Insomnia 65 – The UK’s biggest gaming festival in Birmingham, UK. These events are cover an entire exhibition hall and allow attendees to try out unreleased games, recent releases, see cosplayers, attend workshops, meet Twitch streamers and Youtube creators and much more. As a disclaimer, I was allowed […]