Join our intrepid space reporter Ulala in Space Channel 5 VR: Kinda Funky Newsflash, the long-awaited sequel to the music game series originally released back at the turn of the century for the Dreamcast.

You play as the new reporter at Space Channel 5, one of many news channels who all compete against each other for ratings. As soon as we arrive, breaking news happens – aliens are invading and forcing people to dance! Luckily, we have Ulala to show us the ropes, as she’s an old hand at reporting, dancing and at dealing with alien invasions – this is her third game after all.

Unlike the original games, this game is a VR-only title. It is currently only available for the PlayStation VR at the time of writing. It is planned for release on other VR platforms in the future, with the credits mentioning both Oculus and HTC involvement. 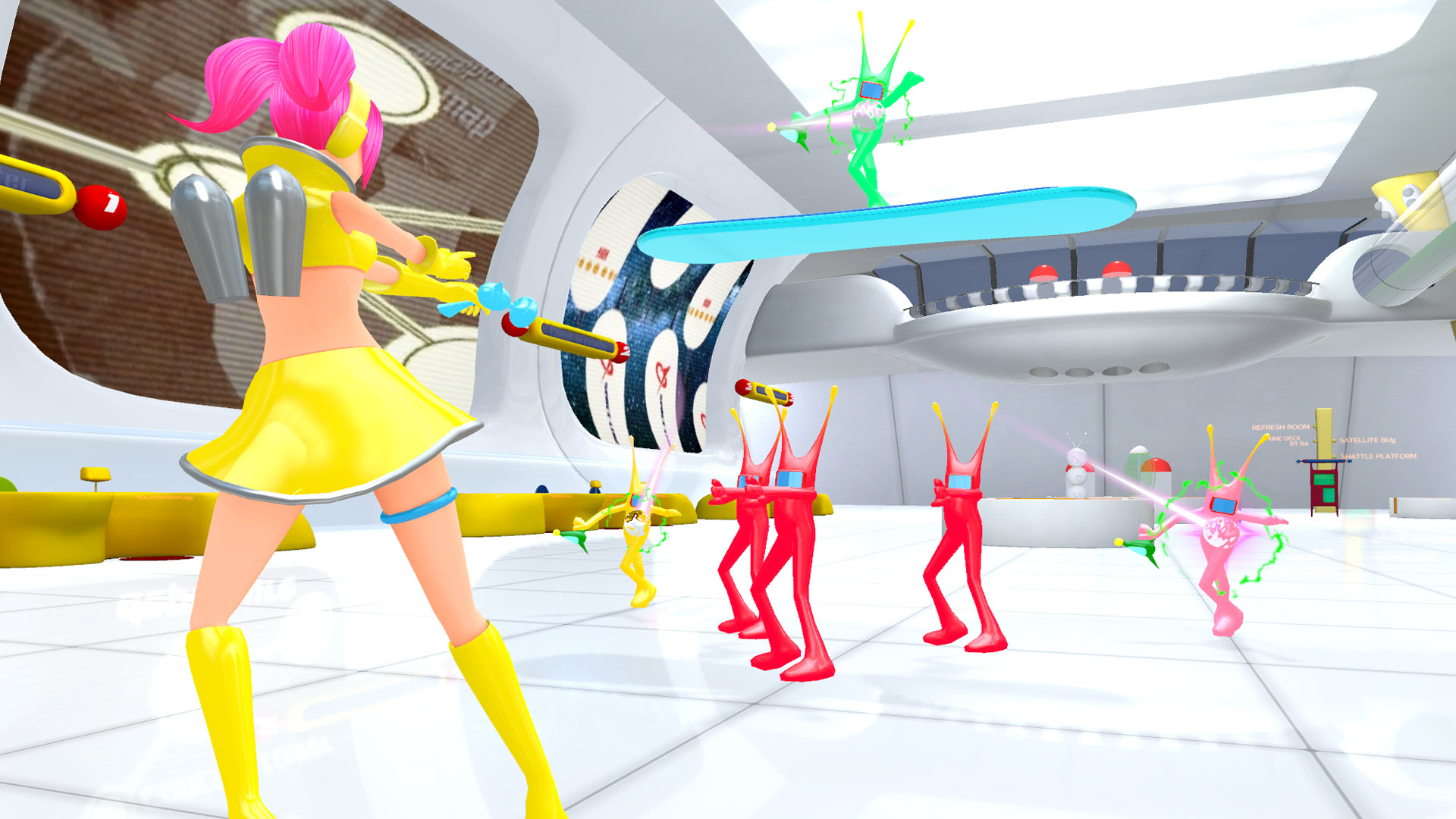 Despite being a rookie reporter, you don’t do much reporting. Or any really. You spend most of the game dancing alongside Ulala in a Simon Says fashion – either copying her movements or copying the movements of the current opponent. I did admittedly think it was a bit odd that the aliens or other opponents were shouting out and demonstrating which way to move or which post to make to avoid their attacks or to attack them in return, but I soon got over it.

This dancing itself is all done to upbeat music in a sci-fi themed but oddly 1960’s sounding world. It’s quirky and the idea itself feels like it captures the spirit of those more experimental games which came out around the ‘90s with the advent of 3D. Considering that this new wave of virtual reality games is bringing back a lot of experimentation with how games work, it feels fitting to have a title like Space Channel in VR.

The dancing itself really does get your whole body moving. You will be dodging attacks left and right and down, as well as making all sorts of dance poses while holding your motion controllers. I did find that some of the poses needed me to be far more accurate than I would have expected at times, but I do wonder if some of the times I missed were due to the hardware. The PS Move tracking isn’t the most accurate thing in the world and I was certain I made the right move most of the time. Luckily I did well enough not to fail any levels, even with the odd missed move. I found the difficulty pretty forgiving in story mode.

The story is fairly short and simple. Aliens invade and we fight them off using the power of dance. There’s a bit more to it, but that’s essentially it. Of course, we do get to hear some fun dialogue between characters along the way, to see some different environments and to experience a bit of drama. It was enjoyable, but I did feel that it was over far too soon – it lasted less than an hour. There are some hidden orbs throughout the levels, so going back to find these or to get a higher accuracy score does add a bit of replayability.

Aside from the story mode, there is an arcade mode and a 100-stage mode to keep you playing, as well as being able to replay story levels. The 100-stage mode puts you in what feels like a non-stop set of short dances that get faster and faster. It tested my memory too – it has silly rules like if the dancer says ‘meow’ you need to make a certain pose, then it adds a ‘woof’ in the next stage with a different pose, a ‘chu’ in the one after that and keeps bringing previous commands up. That said, there didn’t seem to be a penalty for missing poses aside from it beeping at me. After I realized that, the tension did go down. I like to be challenged in that sort of game – it did get difficult after a while, but without the threat of a penalty for failure looming, it didn’t feel like it. It’s certainly great for exercise though!

On the topic of exercise, Space Channel 5 VR has a few nice little extras. A calorie counter is one of them. It estimates the number of calories burned by playing the game, which does help out those using it as a fun way to exercise. I always like to see little extras like that.

Graphically the game uses clear and simple visuals that work quite well in VR. The style of design used is rather unique and helps it to stand out amongst other rhythm games. Audio is great too, which is unsurprising for this type of game. There isn’t a huge selection of music, but it’s all high quality and fits the theme. I loved hearing the aliens singing during the story mode too. 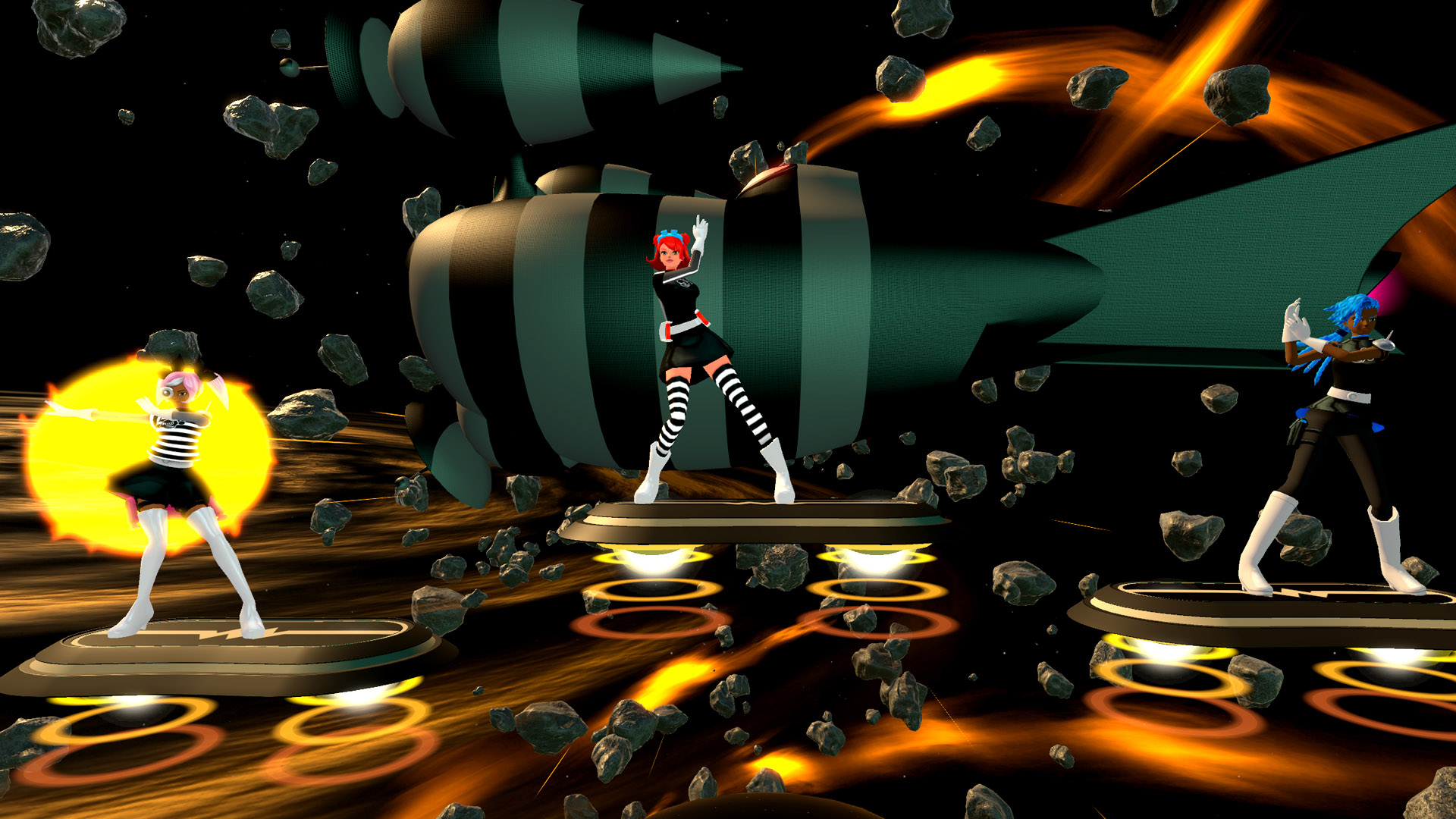 Overall I certainly enjoyed this game. It was full of personality and it was a nice change to be making dance poses instead of attacking or defending like in some other popular VR rhythm games. I did feel like it was too short on content for the relatively high price and it might be better served on a VR system with better tracking, but it was fun and it’d be great to implement into someone’s VR exercise routine with the 100-stage mode. There’s also the fact that Hatsune Miku DLC is planned, which is always a plus.

If you would like to see the game in action to learn a little more about the dancing works, you can see a short video here.

Space Channel 5 VR: Kinda Funky Newsflash can be bought digitally on the PlayStation Store. If you’re feeling nostalgic or want to see where the series came from, PC gamers can also buy Space Channel 5: Part 2 from the Humble Store.

Many thanks to Groundling Inc for the review copy.