Hop into my spaceship and ride with me as we try playing Loop – The Distress Call, a narrative game developed and published by Adven Works for the iOS platform (and soon Android), released in early 2020.

At first, one might wonder if a mobile game is truly worth getting invested in. Most games on your cell phone are probably are based on gacha – a mechanic similar to capsule toy vending machines where you receive random rewards. Or perhaps that’s just me, as I could be called a gacha addict, currently being deep in four different ones myself. If not gacha, then many other mobile games are arcade-style with simple levels meant for short playtime while on the bus. To my surprise, Loop-The Distress Call fits neither of these categories.

I haven’t seen many if any games similar to this made specifically for a phone that didn’t make me want to rip my hair out due to having poor time management (looking at you Mystic Messenger, I swear I tried). So, to say I was intrigued is a good first impression and I am a sucker for space adventures and similar. I even started writing a space novel myself but never finished it. Oh, and I would never board the first spaceship ever made, Wall-E and Virus (1999) made a bit afraid of trusting space ships but hey, for this game’s story to start someone had to take the hit. 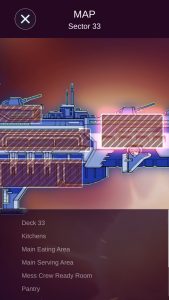 The game starts with a distress signal from someone named Ensign Althea Young, on board the spaceship FCV Raptora. She reports that she has an unresponsive vehicle and the crew is acting in a disturbing manner, with both their motor functions and even their personalities being affected.

It is your job (and Taskbot, he is a good boy) to try and help Althea reach the conclusion to this story and understand what happened. You do this by trying to extract all the information you can from what Althea sees and experiences while trying to help with her choices, fears, and thoughts on what has happened to her friends and crew. It is a simple setup, but it’s like the old saying goes “A simple fork is as useful as an expensive one if well made”. Okay, so that’s not an old saying, but I wanted it to sound fancy.

The gameplay is simple but quite interactive for a phone game. You can see Althea’s ship’s maps to try and point her in a direction where information can be found. You have a mental map with the possible theories that you can think of from what you’ve heard and researched. There is even an interface to check your emails with the press of a button or two.

On the bottom part of the screen is where the main fun lies: The four dialogue options. Depending on which ones you choose, the story can vary and fatal consequences might come your way, even though this time there’s no Xenomorph running after you. I want to praise how this game genuinely offers more than one option to be rude since normally it’s just an afterthought that developers put in as one option in case people want it. I’ve treated Taskbot a bit badly by accident and I feel bad to this day.

The game has multiple endings that change depending on your choices and I won’t spoil any of them for everyone, but they are interesting to check out! That said, it can feel a bit repetitive to get to them due to certain twists which happen. These affect the progress, but this is a no spoiler zone!

The dialogue does feel confusing at times due to too much information being displayed in one moment, but you can always take a bit of time to respond without any real repercussions. I usually did this, since reading for too long without any visual distractions or small breaks in the game makes me a bit tired and that’s my main problem with it. More images or visual breaks from screens full of too many words and too much information would have benefited this game very much, but as it currently stands, I often felt my eyes were too tired to continue playing and reading the important information being given.

The atmosphere is a bit chilling as you explore the strange and even bizarre society established in the ship through the way that Althea describes her life there and how empty it feels. This is aided by background music that sets the scene and how hollow the world feels as you explore it. That said, having a map from the outside of the shop on the rooms on the ship without a visual cue of the display makes it hard for you to feel scared of the ship if there is no description of how the room or the environment. It might be a nitpick, but it affected my immersion a bit. 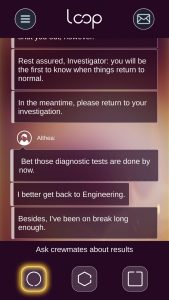 Overall, Loop is a great game for the small audience that enjoy visual novels, narrative games and games with an impactful connection with the story presented. It has a simple story that leaves you wondering what is the fate of Althea and the Raptora, with good gameplay that makes you really feel like a “detective” trying to puzzle this together and some nice music to set the mood, even though it doesn’t change much. The visuals do let it down, but otherwise it’s a good recommendation for a friend to start this style of game, especially due to the easy access to it on your phone.

Loop – The Distress Call can be bought digitally on the iOS store for iPhone/iPad and now the Android store.

Thank you to Advenworks Ltd for providing a review copy of the game.

All Games All Posts JRPG

Introduction Growing up, I was enamored by one particular genre out of all of them. You could say it was an unhealthy attachment. JRPG’s were always a part of who I am. For as long as I can remember, they were always present. I can recall watching my dad play titles like Tales of Destiny or […]