At the penultimate moment of the war against Nazi Germany, with victory near at hand for the allied forces, we learn that Hitler has one more trick up his sleeve – he uses occult techniques to raise the dead. The war rages with the land overrun by zombies, until Hitler’s defeat by a group of volunteers. This should have ended everything, but we find that corpses are still walking the Earth. This is where our story begins, in the fourth installment of this series – Zombie Army 4: Dead War.

Nazi Zombie Army 4: Dead War sounds like it should be a parody game. It takes the two most stereotypical shooter enemies, melds them into one and then throws hordes of them against you and even gives some of them miniguns and flamethrowers. Despite this, it actually takes itself rather seriously in some ways with some semblance of a story told through the dialogue and cut scenes, a detailed upgrade system, multiple difficulty modes with real differences outside of enemy health and more to do than you might expect. And then it throws in undead sharks, just to up the level of absurdity. Luckily, I’m all for that.

For those unfamiliar with the series, it started back in 2013 with Sniper Elite: Nazi Zombie Army which was a PC-only title and spin-off of the main Sniper Elite series. This did get remastered in Zombie Army Trilogy which brought the series to consoles too. The basic gameplay concept for campaign mode remains the same through the whole series – make your way through levels, kill zombies, achieve some objectives and restock at a safehouse in between levels. This can be done solo or in co-op with up to four players.

As you go through the levels, whether alone or with other players, you will have to tackle the undead. Aside from regular nazi-uniformed (or otherwise dressed) zombies, there are exploding zombies, a few types of zombies with heavy weaponry and more. You are given a variety of ways to deal with these. Some of these can be delightfully gory, such as stomping on an undead body to send a splatter of blood out.

The most obvious way is to shoot enemies. It’s a little different than most games though. While Zombie Army 4: Dead War has moved away from its Sniper Elite roots, one thing it does retain is a focus on accuracy when firing.

Headshots are rewarded heavily in this game, both by their stopping power and with your score. This is true whether you are using a sniper rifle, shotgun, SMG or pistol. When I am playing this game, I would estimate that about eighty percent of my shots that hit are headshots. Despite the rush of enemies running towards me, I always had my focus on lining up the shot properly before taking it. It felt quite different to me than many other games, but perhaps that’s because I almost always ‘run and gun’ in any shooter. It’s incredibly rare for me to even use the scope in most games. This game actually had me enjoying it though. Perhaps it was because it was rewarded or the features it centered around it such as slowing your breathing to improve your aim. Or maybe it was just the occasional snap to a kill cam where I saw my bullet pierce the skull of a zombie. So satisfying.

While you can just fire away happily at zombies, luckily the game provides you with some extra skills to use too. After killing some zombies to charge up, you can activate skills such as marking and automatically shooting at several enemies in one click or performing special takedowns which allow you to do a close-range attack on an enemy and receive some health in exchange. I found myself doing this often for the fun of it, but it was also a great way to keep health topped up and avoid reliance on medkits, which are a scarcity in the game. As they would be in a zombie apocalypse, I suppose.

I’ve already mentioned medkits, but there are other items too. Most fall into two categories – traps and grenades. Throwing a grenade into a crowd of enemies, whether it’s regular, electrified or holy, can turn things around quite quickly. Traps are more useful for when you know you will be facing waves of enemies and want to camp out somewhere to snipe them or defend an area. It threw sections like this into levels occasionally to mix things up. While not an item, there are also environmental traps, such as noisemakers you can activate to draw zombies in which then explode.

So in short, you’ve got quite a decent range of weapons, special attacks, and items to fight the undead horde. Throw in unlockable perks such as self-revival or increasing combos as well as weapon upgrades and item modification and it mixes up play even further. There are challenges to complete for each level, hidden collectibles to find and stickers to unlock, which are essentially achievements but more visual. I do have to say that it kept things interesting and certainly increased the replayability for me. The range of options and focus on accuracy had me thinking far more than I normally would have for a shooter too. 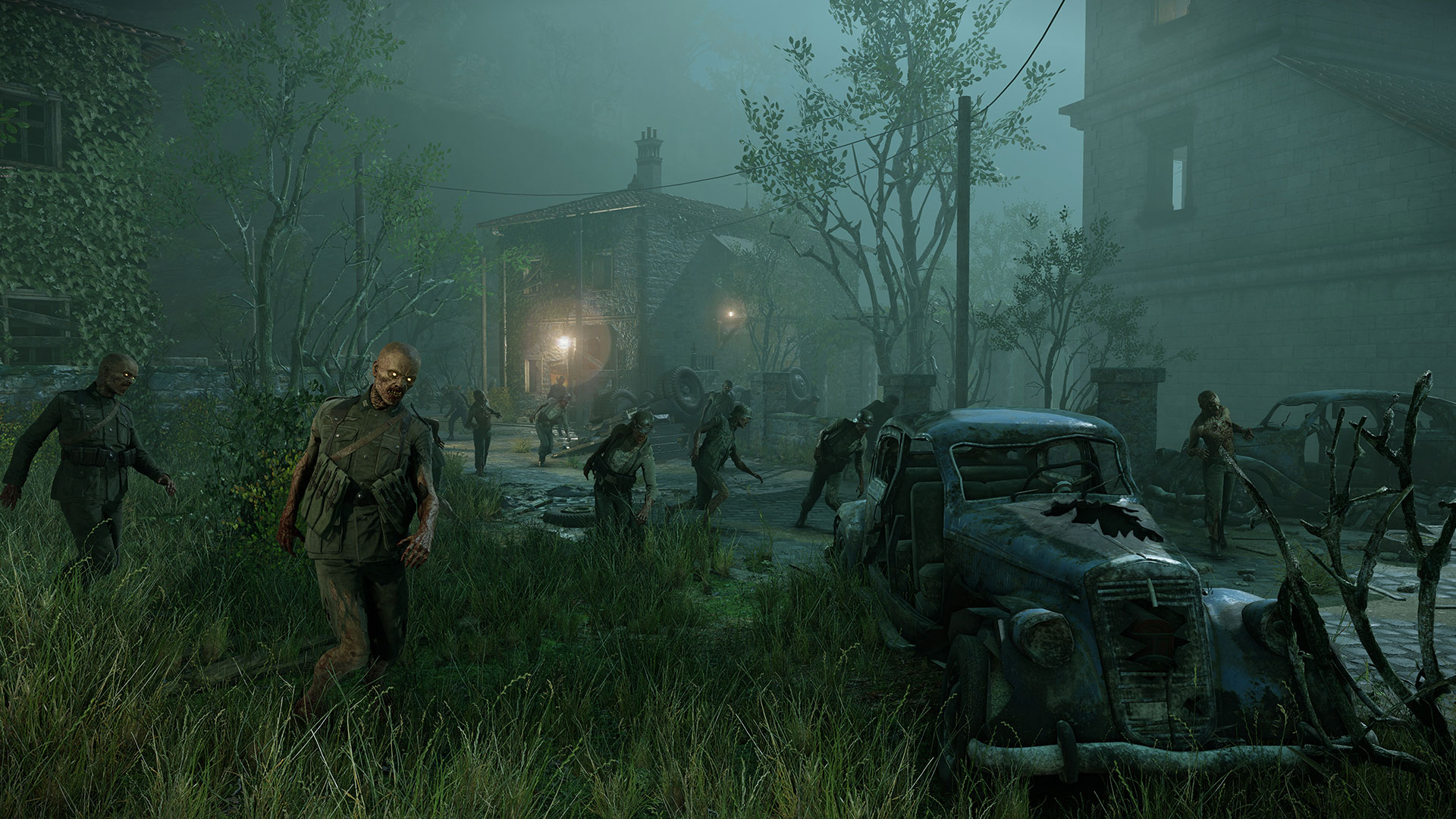 Outside of the campaign where you get to experience the story of Zombie Army 4: Dead War, there is a horde mode and a weekly challenge mode.

The horde mode is essentially a wave defense mode. You choose a level and fight off waves of enemies either alone or with friends. Or with random people, but with friends is better. You start with only a pistol and have to scavenge from there, but they didn’t make it too difficult to find better weapons. It’s a good way to throw yourself into fights and level up perks, but I find that multiplayer could be quite difficult unless you work together as a team. It may just have been my experience, but while I came across teamwork reasonably often playing the campaign with random players, I didn’t find it often in the horde mode.

The weekly challenge has you go through a preselected level with a condition. As I write this, the condition is to not use a rifle while completing a level. It rewards you with a cosmetic and some XP.

On the topic of cosmetics, one thing I did find a bit distasteful – I can understand that DLC might be required to support the game further, but it was being advertised right in the character creation stage. Certain characters, weapons, and skins are DLC-only and are grayed out with a notice to buy the season pass. It just didn’t feel pleasant that one of the first things I saw while playing the game was a request for further purchases.

On a more positive note, another thing that was front and center was the accessibility mode. This lets you change text color, text size and how opaque the background box for the text is. I was personally involved in advocating for features like that for a system at my workplace, so I was pleasantly surprised to see it in a game and not even hidden away deep in the options menu. There are a number of further options around aim-assist and control too.

Graphically the game looks detailed and makes some great use of lighting to set the atmosphere. Many of the levels are quite dark, so this stands out quite a bit. As a note, the gore can be particularly detailed, so keep in mind that more sensitive players may not appreciate that part.

The sound is great too, with high quality and fitting sound effects and clear narration, if very stereotypical with the accents used. Sometimes the sound can add to the eerie atmosphere or just be an early warning that you’re about to be blown up by an explosive zombie. 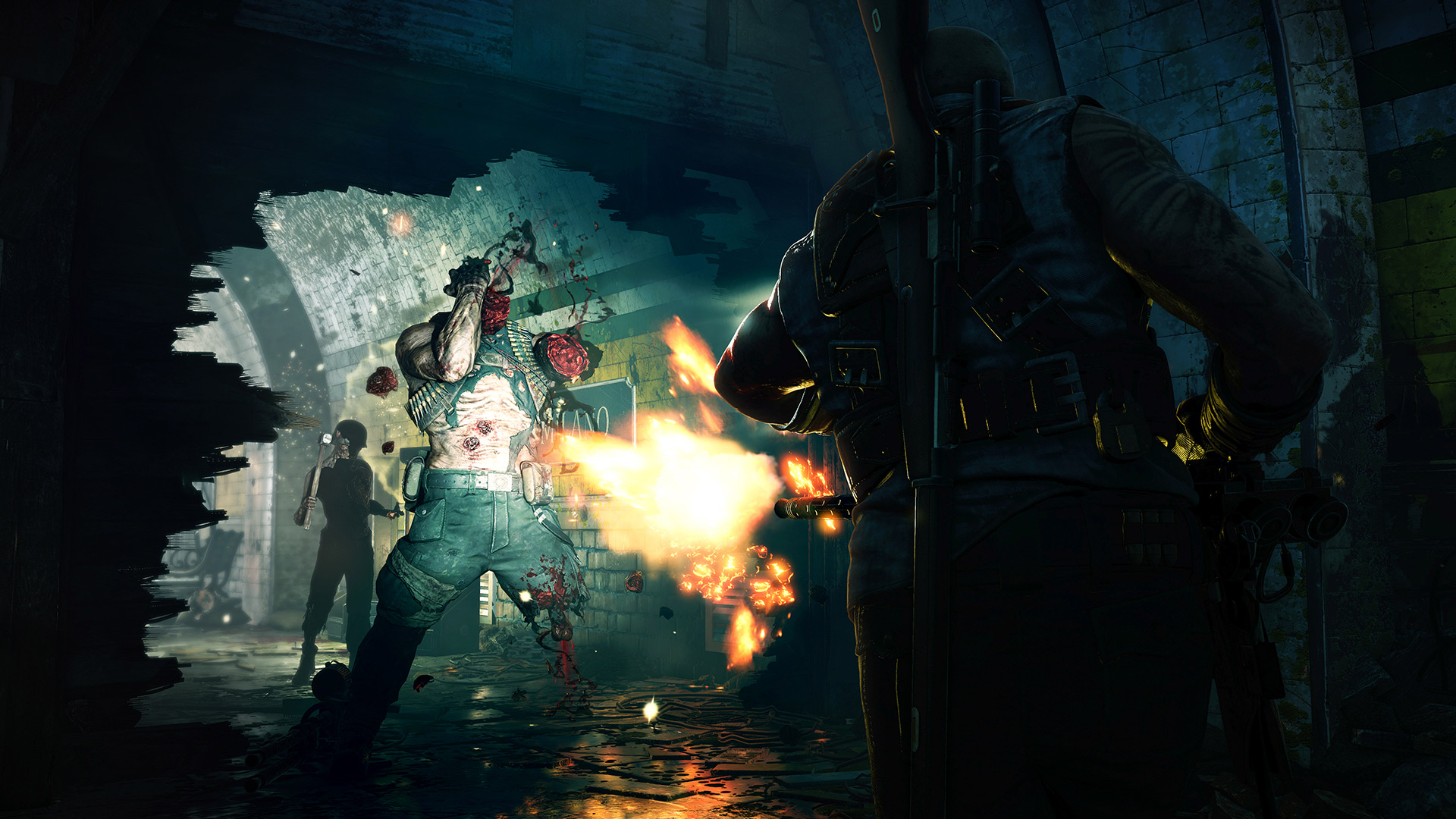 I thought that I would enjoy Zombie Army 4, but I did more than I expected from my brief play of the demo at EGX 2019. I actually played enough that my hand began to hurt at one point because I didn’t want to stop. Playing solo was fun, but it improved even further in co-op with a good group. I recommend this game in general, but I recommend it even more if you can convince some friends to pick it up at the same time.

Zombie Army 4: Dead War can be bought digitally on the Epic Game Store (PC) or via Humble Bundle (PC). For console it can be bought on the PlayStation 4 store or the XBox store. It can also be bought physically from a range of online retailers such as Amazon (US) or Amazon (UK).

Many thanks to Rebellion for the review copy.