Infliction: Yet Another Iteration On The Tried, But Terrifying P.T. Formula

Before you look at Infliction: Extended Cut and run away at the mere mention of “Silent Hills spin-off,” hear me out. I know horror fans have grown a bit numb to the prospect of psychological hallway simulators, and for good reason. Ever since we were graced (and subsequently cursed) with Silent Hills P.T., a slew of imitators emerged from the woodwork to give us the game that Konami snatched from our fingertips. These titles run the gamut from good to “eh,” like:

P.T.’s influence doesn’t stop at mid-sized indie games either, as Resident Evil 7 took tons of cues from Kojima’s ill-fated demo. In my opinion, this was the pinnacle of P.T. mimicry, a fully fledged AAA title that sought to realize the potential Silent Hills demonstrated; showing that this particular form of flattery has the ability to inspire good, if not great, games.

However, six years after the fact, the industry still reels from the aftershock of Silent Hills, and horror enthusiasts are pummeled with imitation after imitation. Much like the rash of Amnesia clones that dominated Steam following Frictional Games’ masterpiece, we haven’t seen the last of P.T.-like titles, and Infliction is the latest in this regard. So the question remains, does it stand above the crowd?

The short answer: no, not really. The long answer? Keep on reading.

Yep, this is what you’re in for folks. Buckle up.

Navigating the Nightmare: The Good, Bad, and Boring of Infliction

I’m a positive person, so I’ll start with Infliction’s pros before we delve into the cons. For all my snarky titles and sideways aspersions, there’s actually a lot to like about this game, especially if you’re not too choosy or you’re just getting into digital horror. After the shaky intro sequence, which features a poorly driven joy ride and some stilted animations, I was pleasantly surprised by the actual feel and atmosphere Infliction created.

Horror games like Amnesia and Outlast like to drop you into the thick of it, and often aim for the grandiose in terms of setting. Drawing from classic literature and film, the unlucky protagonist is plunked into one of the following trope-laden locales:

And more power to them, I have nothing against revisiting well-trodden ground. However, Infliction belies the standard convention and grounds its mystery in a (seemingly) mundane suburban household. I expected to quickly leave this humble abode for more fantastic dreamscapes, hallucinations, or a different setting entirely – and while Infliction takes detours from the central home, you almost always find yourself back in these simple surroundings.

While films have long played with the “haunted house meets middle-America” idea, games outside of Visage and Gone Home have generally avoided it. I feel that part of the reason for this is the fantastic heritage of video games, as its roots draw from DOOM, fairy tales, and D&D. Why waste time at home when you could be battling demons on the plains of Hell? Well, Infliction (among others) shows exactly why home and hearth holds promise for horror.

The house feels realistic and lived in. It’s not a sprawling manor or twisting dungeon, it’s a three to four-bedroom house with limited floor space and some creature comforts. It’s somewhere the player might very well imagine themselves in day-to-day life, and the notion that a psychological evil may leak into ordinary places like this is deeply disturbing. 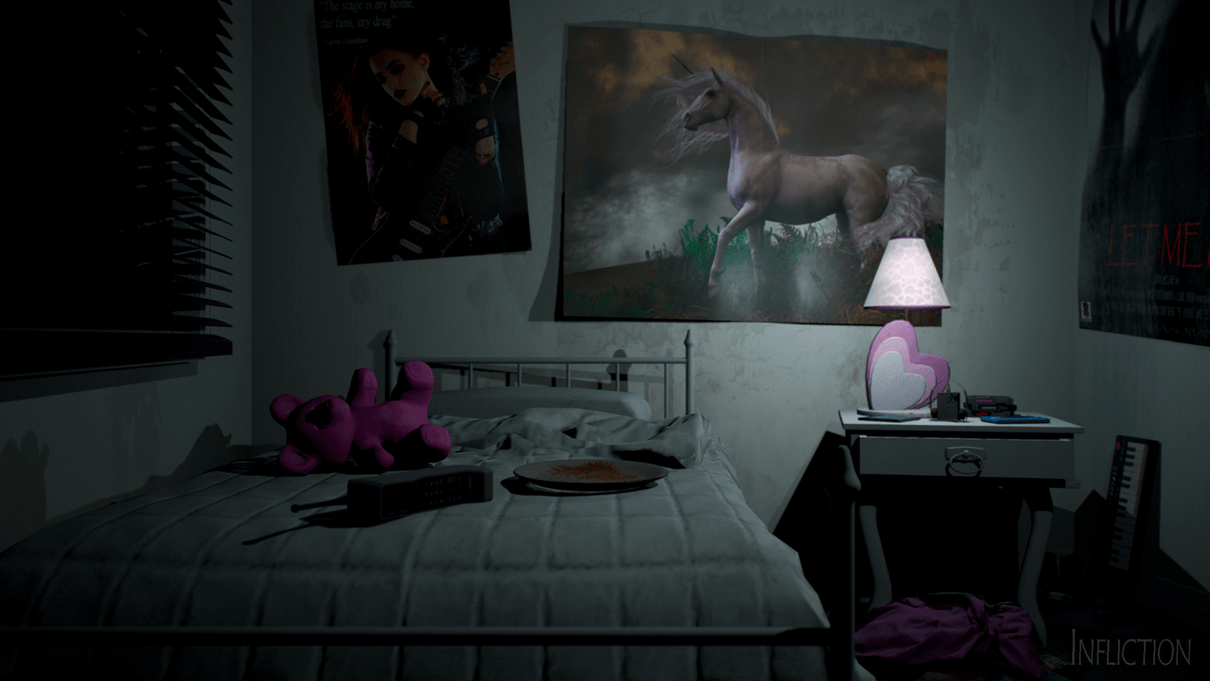 The dirty plate, the abandoned phone, the errant teddy bear, ah… I love this.

Infliction’s dev delivers wonderfully on this premise, and I think the opening thirty minutes of the game are its strongest for it. Small touches abound, each making you wonder what the hell is going on and just where everyone is, like:

Couple this with stoves that turn on, lights that actually work (sometimes), and your daughter’s favorite tape playing in her room, and you’ve convinced me that someone inhabits this space. Yet, simultaneously I found myself expecting a specter to stare at me from every window.

I was reminded of the opening of Gone Home, where my imagination populated the house with horrors far worse than anything the devs could or would cook up. However, unlike Gone Home, Infliction had a few ready-made monsters in the wing, which is where things begin to go downhill.

Exposition, Reveals, and The Foundation of Lackluster Horror

Now, before I expound the many missed marks of Infliction, I have to confess that I was tense throughout my playtime, and at many moments I was downright terrified. I’m not arguing that Infliction isn’t a scary game, although you may find yourself laughing from time to time; I’m arguing that the scares are a bit cheap and that the context surrounding them is somewhat poorly constructed.

The problems begin with the most basic of game elements: writing, graphics, and sound. The quality of the graphics ranges wildly, and while many of the environments look compelling, the characters themselves are poorly rendered and stiffly animated. There were moments when I should’ve been recoiling in horror from a convulsing corpse-woman, but instead I was snickering at her gyrating dance moves. There’s a scene early on where you discover a tape portraying a gruesome murder, but the woman’s dead eyes and the wooden stabbing of her assailant fail to engender fear… or even sympathy. 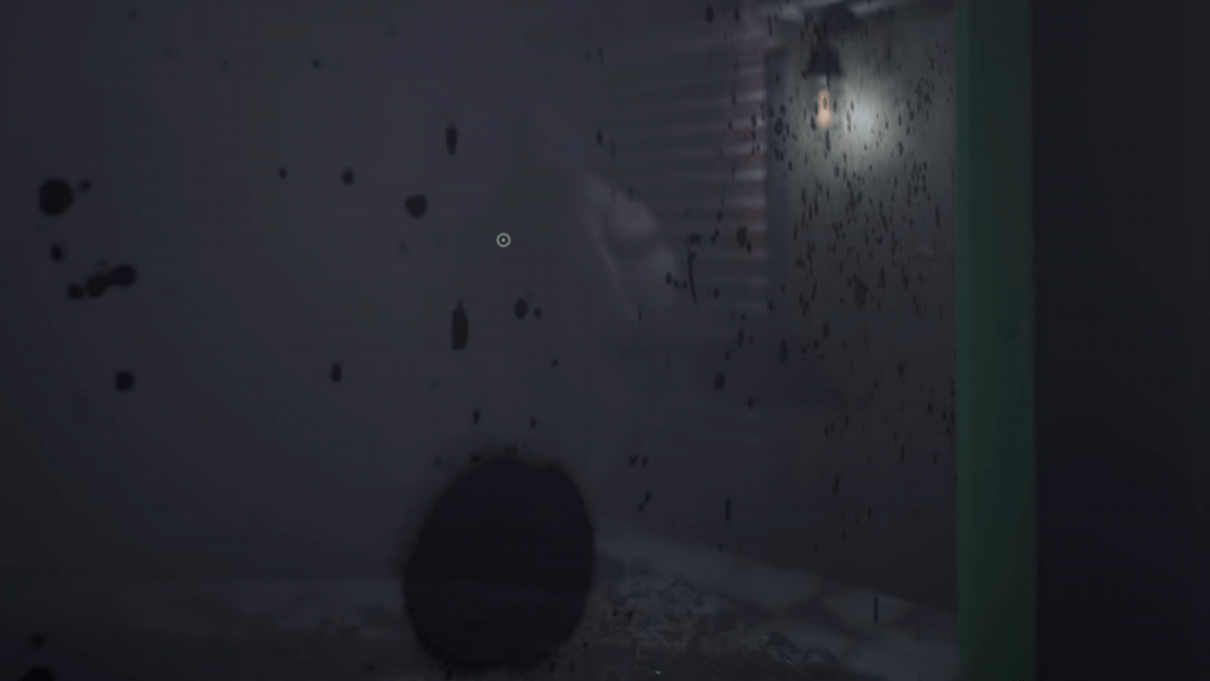 This is how to obfuscate your monster, he was a welcome change of scenery

Sometimes, this weakness is either mitigated or actually plays into the dev’s aims. In the hospital sequence, a horrid humanoid figure scurries across the ground behind you, its awkward movements and jerky limbs making it seem more like a Silent Hill nurse than the standard “spooky dead girl” I had grown accustomed to. That got me. I felt adrenaline pumping through my veins for minutes afterward, and I was on edge for the rest of that level.

If Infliction had adjusted for this graphical limitation and cast darker shadows or spawned more blurred enemies, then I might have no complaints in this department. Sadly, the harsh white light of the main house often shows our pursuer in all her glory, and she simply has too few polygons for me to be truly frightened by her.

Sorry foot fetishists, this one’s polycount is a bit low.

Most of this can be glossed over with immersive sound design; I don’t care how dumb the grunts in Amnesia look up close, as soon as I hear this I’m running. Sadly, Infliction drops the ball here too. The environmental noises are adequate to good: light switches sound the way they should, and the swelling ambient noise raises the tension when needed. However, the main enemy utters a comical scream when she descends upon you, and you’re more likely to be worried for your eardrums than for your impending doom.

Again, this spoils moments that were otherwise unsettling. There’s a scene where the ghost stares out at you from behind a missing wall panel. The player waits, hoping it’s a passive spook, but then she rips the paneling out until she crawls through the hole and onto the ceiling, getting right into your face and then… that pitiful scream. I just couldn’t take it seriously.

Finally, the lore, plot, and writing is this game does next to nothing to reinforce the flagging gameplay. At first, I thought this game was created by a foreign team, as there were tons of awkward sentences and strange diction that hinted at localization. However, Caustic Reality hails from Sydney in Australia, so maybe it’s just the way they speak down under. Couple the offbeat sentence structure with the somewhat aimless voice acting, and I often had to pause to try to parse out the actual meaning of what was just said. 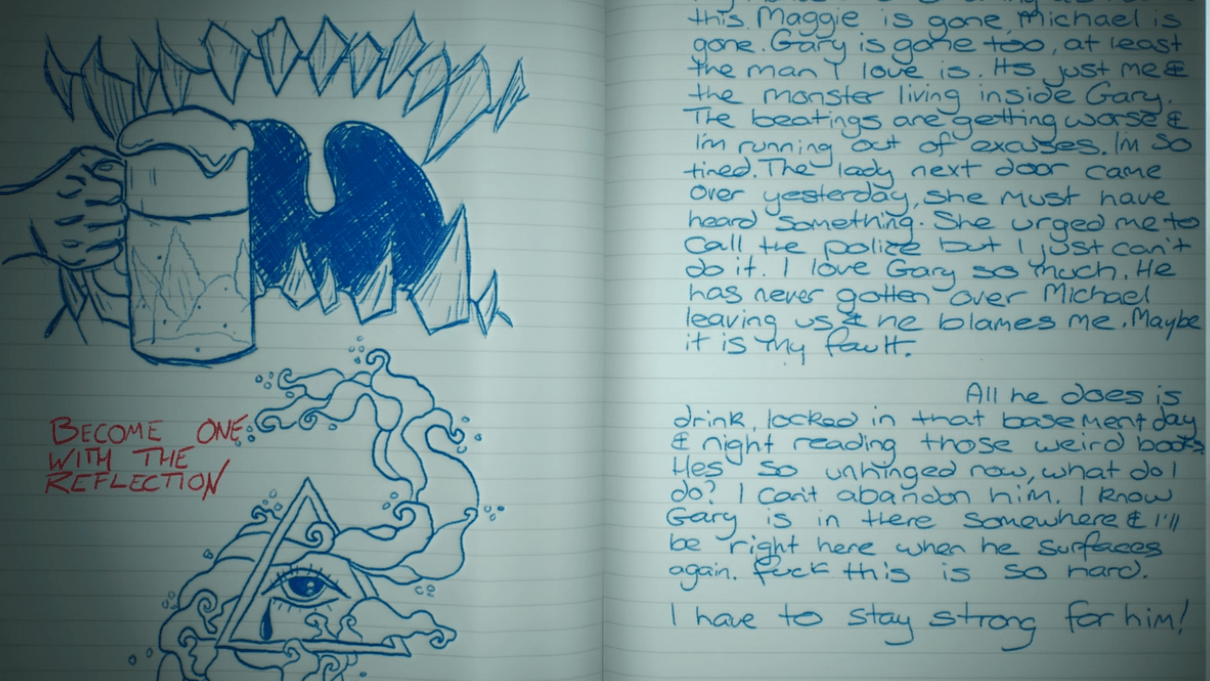 “… the monster living inside Gary. The beatings are getting worse…” Hit me over the head with it why dontcha?

I won’t delve into major spoilers, as I think Infliction is still worth playing and exploring if it’s up your alley, but suffice it to say that the narrative is fairly predictable. As soon as you spot the empty booze bottles and –ahem- ritual book, the puzzle is pretty much complete. I love spiritual and demonic elements in games. There’s nothing inherently wrong with these choices, but when dealing with fairly well-explored genres, you need to bring something new to the table to keep players engaged.

For instance, I adored the pixel horror game Faith even though it covered extremely familiar ground, as anyone who’s watched The Exorcist would tell you. Faith managed to play with my expectations thanks to its zero budget aesthetic and computer-crunched voice modulation, and I was engaged despite the familiar story arc, whereas Infliction plays it safe on most accounts.

Infliction: Extended Cut: Good For A Couple Scares, But Not Much More

Before closing out the review, I’d like to mention that Caustic Reality is a one-man show, and Infliction represents a significant achievement. It’s no easy feat to create even something as simple as Faith all by your lonesome, and I have no doubts that this was a monumental effort by the developer Clinton McCleary. My main gripes with Infliction stem from missed potential, something easily remedied with further refinement, manpower, and experience.

When it comes down to it, Infliction is truly a mixed bag. On one hand, the game is undeniably scary, and will certainly delight those crowded around the TV on scary-games-night (other people do that, right?). It has moments of genuinely disturbing imagery, and the unwinding of its mystery is leagues beyond the low-effort “narratives” presented by most jump-scare games these days.

Juxtaposed with this, you’ll find silly animations, unconvincing voice acting, and one of the most tried and true horror plots of all time. So, if you’re looking for psychological horror that draws you in deep and rattles you to your core, look elsewhere. If you just want to be spooked and enjoy a bit of indulgent B-horror, then Infliction is your game.

Infliction: Extended Cut can be bought digitally on the PlayStation or XBox stores and is due to release on Nintendo Switch in the future. The non-extended cut version without the additional endings, New Game Plus mode and increased difficulty is available on Steam (PC).

Many thanks to Caustic Reality for the review copy.

Content Writer, Amateur Poet, and Occasional Dungeon Master. I’ve published in literary journals and gaming sites, and suffer from an excess of interests.

All Games All Posts Indie Puzzle

Nostalgia is a powerful thing. One only needs to look at the successes of games inspired by Mega Man, Doom, and Castlevania to see that people want retro throwbacks. They are forever drawn to their rose-tinted glasses – to a time long since gone by. Knightin’+ seeks to evoke these youthful pangs of joy, but […]