Have you ever wanted to be in the shoes of an advanced, sleek A.I built to comprehend complex human interactions in order to communicate accurately? Yes?

Then this isn’t the game for you!

Speaking Simulator is an eccentric game that hilariously puts you in day-to-day situation of human interaction. However, instead of giving you choices in dialogue, it requires you to manually control the mouth to articulate words. 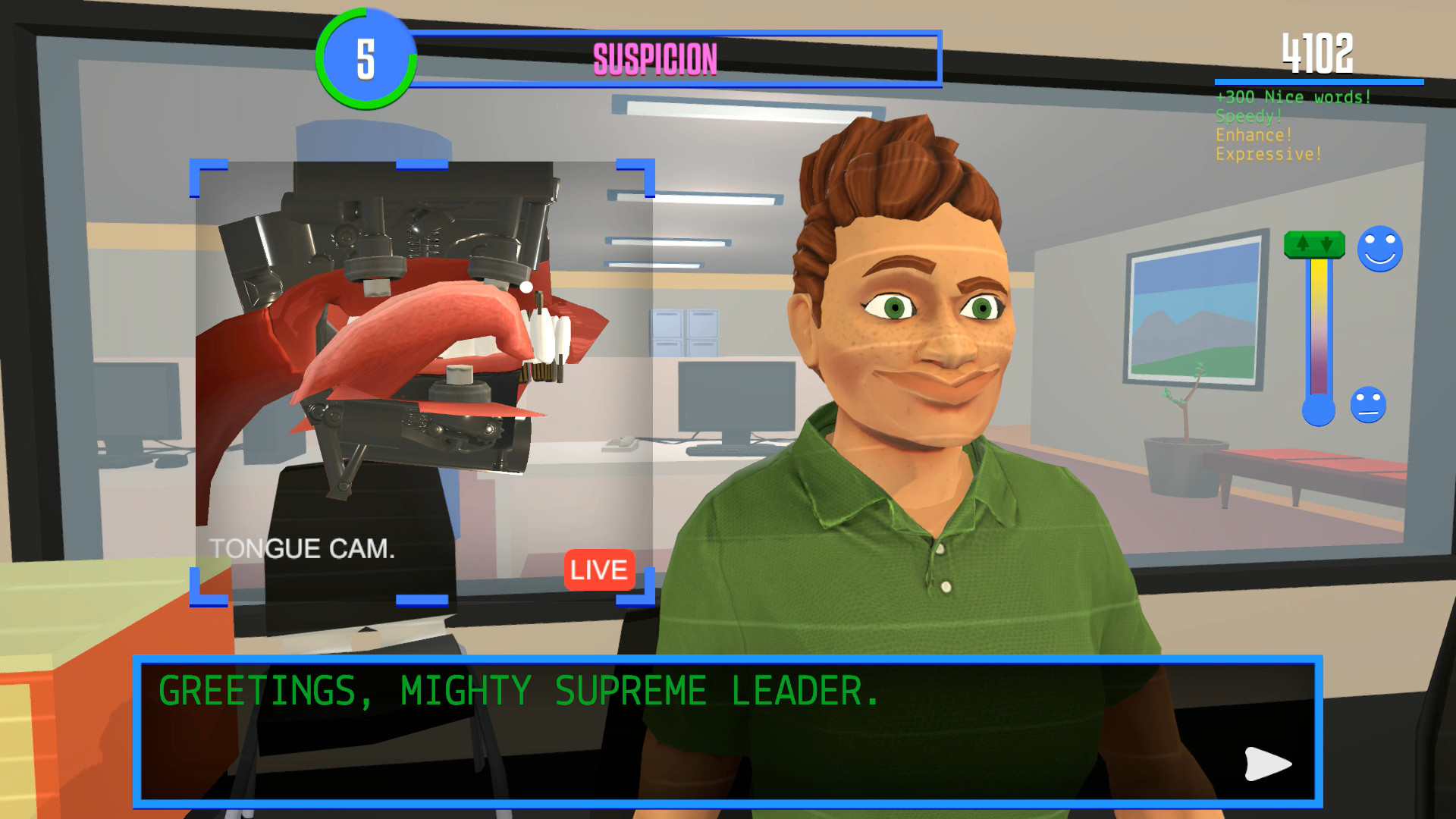 Speaking Simulator was developed and published by Affable Games. It’s not perfect, and has its ups and downs. When all is said and done though, it’s incredibly funny and quite a unique experience which can be played both on PC and Nintendo Switch. This review is based on the PC version.

Speaking Simulator tells the story of an alien robot. It’s been tasked with infiltrating society in order to rule humanity. To achieve this extraterrestrial plan, Our hero, Blank Textfield, must use tools to mimic human speech. These include;

– Pressing internal buttons with its tongue.
– Maneuvering your lips up and down.
– Making eye contact.
– Changing your frown and looking sad, neutral, or happy.

Here’s the catch though, it looks ridiculous. So much so that it’s hilarious. Every movement is exaggerated. The tongue will often clip through the chin. The eyes like to really pop out of the socket. Basically, it looks like one of those old-school Gmod animations with hundreds of deformed wacky faces, as seen above. 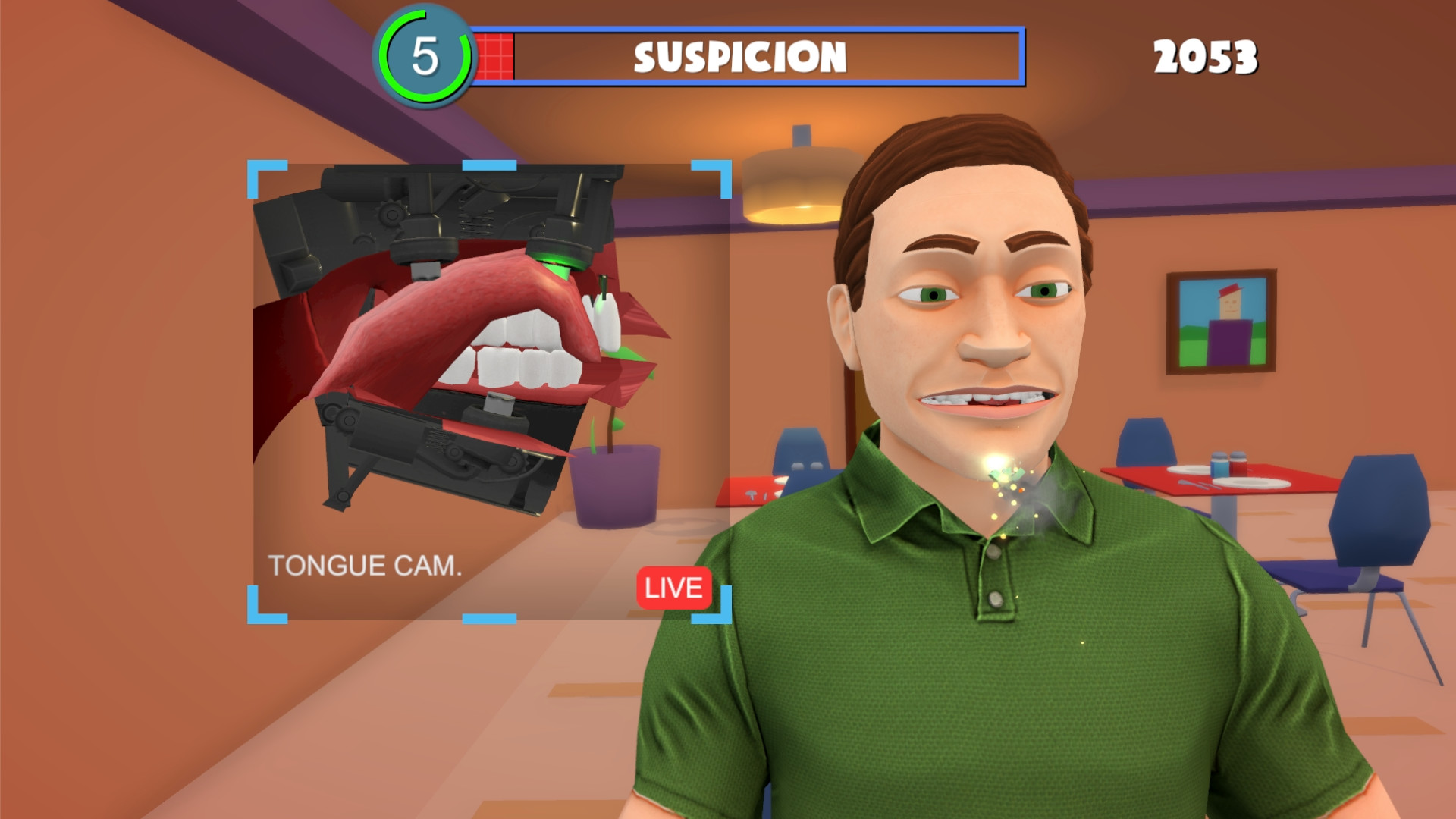 The robotic sounds when speaking doesn’t resemble human speech at all. if you mess up challenges, absurdity occurs. Blank’s ear will maybe explode. Or it’s head will be engulfed in flames. The idea that no one notices this adds to the hilarity for me. I’d compare it to Octodad. Despite the wonkiness we witness, everyone’s convinced that it’s normal. Everything is fine.

Speaking Simulator’s mechanics are as such. Like games before it, in order for the mouth to function, several button presses are required.

– To Speak: There’s a happy/sad/neutral slider. This forces your lips into a smile or frown. You can also control the eyes with this.

– Tongue Movement: This is controlled with the WASD keys.

When action is required on your part to bamboozle a NPC, an indicator appears. If you fail to nail the correct buttons or facial switches in a set time limit, that indicator will move to reflect it. Fill it completely and fail the mission. 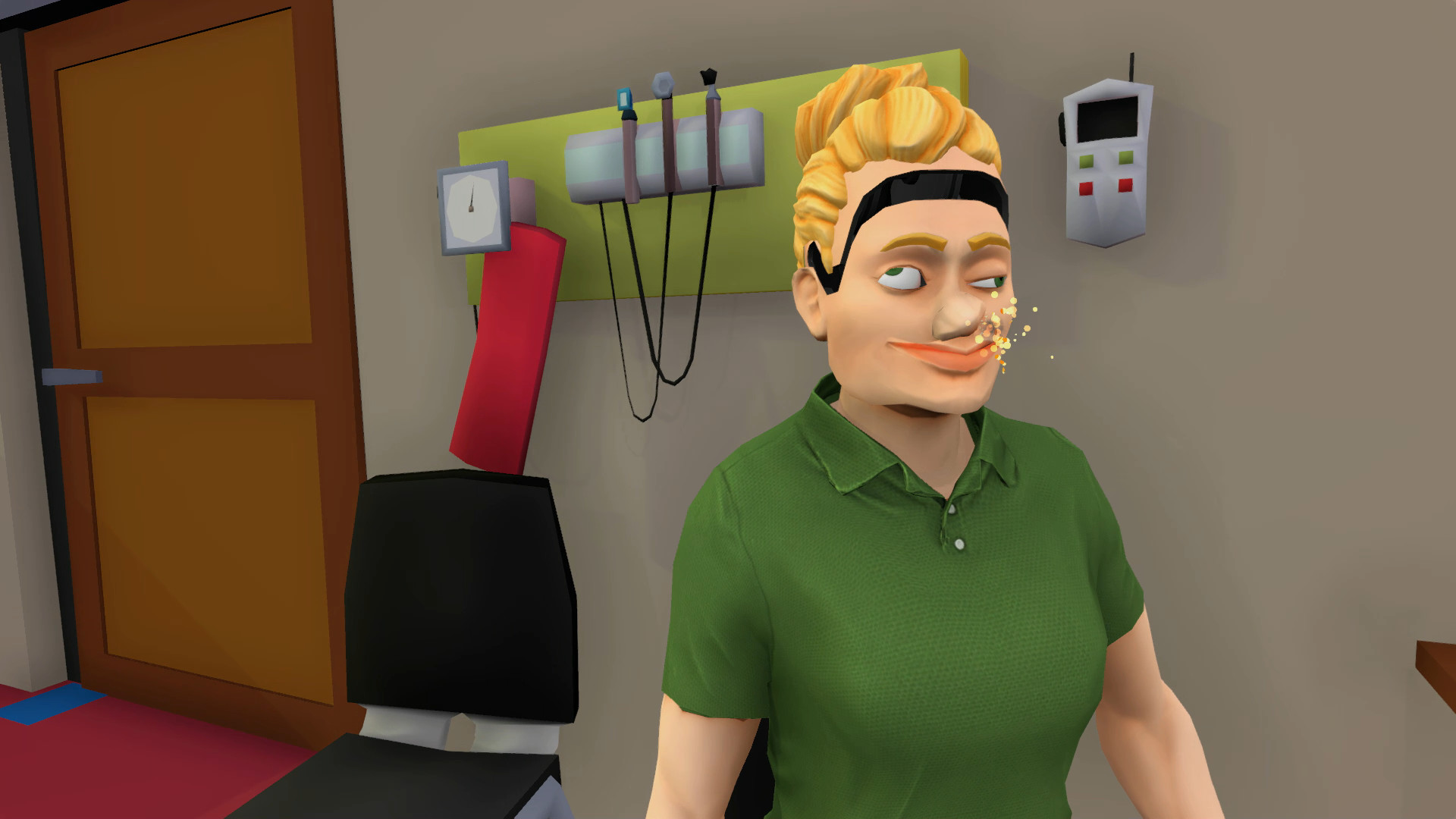 After playing more, the game’s flaws began to show themselves. It’s evident that Speaking Simulator was made to be a serious game. With the lunacy of movements and such though, it’s anything but. The system they implemented for unlocking levels isn’t ideal. You’ll need certain upgrades to advance. This results in the game dictating how you need to play to move on. It discourages experimenting. Something I disliked was that the upgrades needed were only evident after completing a mission. That meant that you’d best remember what’s needed or you’d have to play the level again just to check. It would have been great to check this whenever. In its current form, I can only describe it as tedious, grindy, and frustrating.

The controls are interesting, though, I found they left you hanging. Instead of being fun and silly, it’s more of an annoyance. Sure, they’re great for the first few minutes, but that quickly changes. After failing the same mission over and over because of a missed button press, I didn’t want to continue. I felt the developers could have made a few changes here. Made it more balanced. I also felt they could’ve spent a bit more time fine tuning the controls. Overall, it’s clear the developers wanted a wonky good time. The seriousness they shoe-horned in just limited its potential of absurdity. 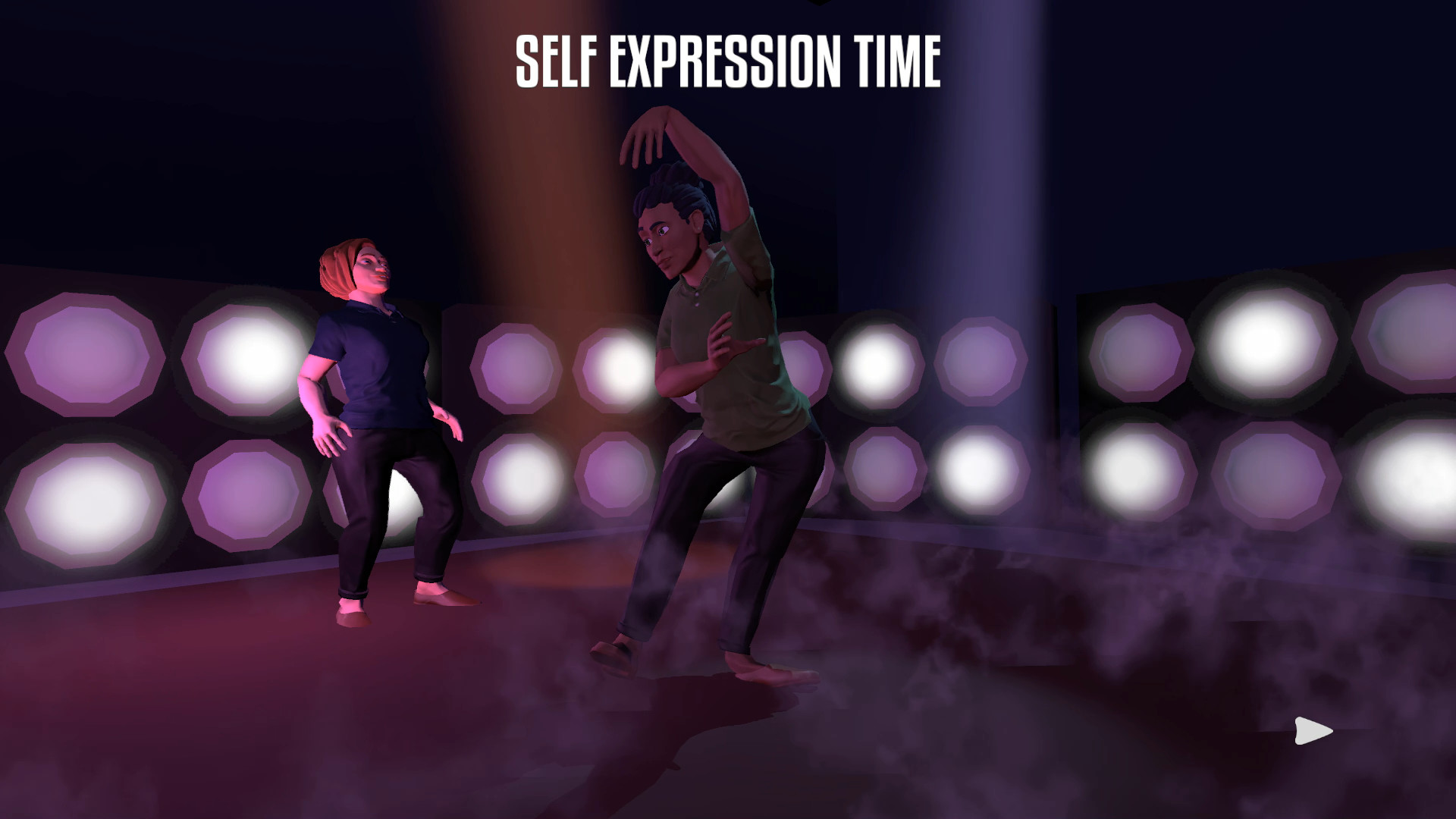 The visual art is straightforward. It’s also very well made and produced. I commend the developers here. It wasn’t as unique as it could have been, but that’s a personal gripe. The models and background are simplistic. One thing I would have enjoyed more is if those absurd facial expressions were a bit less cartoony, and more realistic.

The story is insane. It’s absolutely crazy. Then the last level happened. In it, you’re trying to convince a crowd to elect you as President of the United States. Sure, it kept with the craziness thus far, but that quickly changed. I began to notice how closely it resembled real life events. This is where that imbalance of wonky and serious was most evident. I felt a sense of despair. This level lost its wackiness, and was now commentary on false promises. How we’re influenced by buzzwords. Speaking Simulator was definitely held back by its shifts in tone. Sometimes, shifts that were sudden. 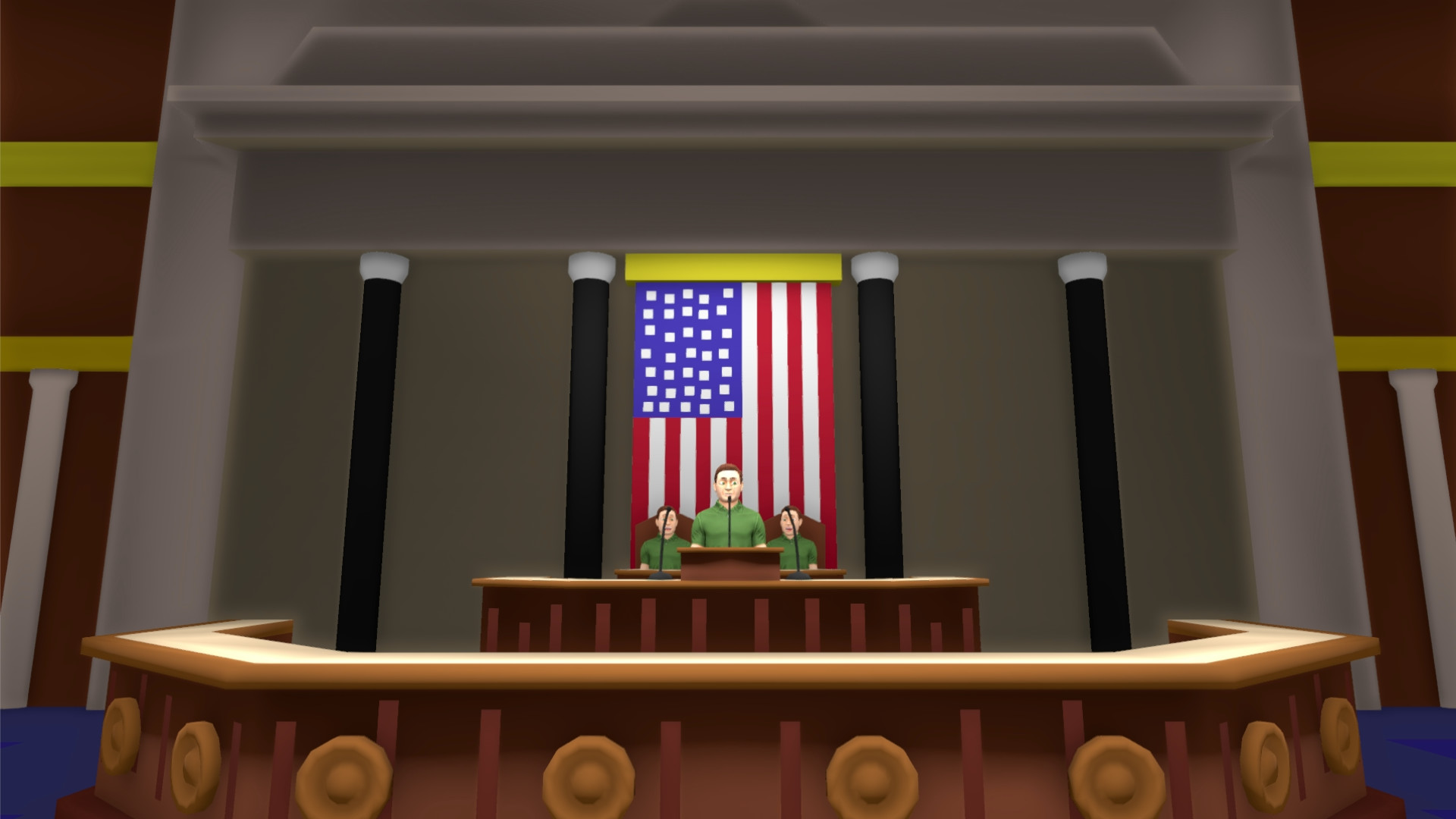 All in all, Speaking Simulator is still a good time. Maybe not for prolonged periods to mitigate the tedium mentioned. It also would definitely benefit from easier level advancement requirements. And tighter controls. I felt that bouncing from serious tones to silliness also held it back immensely.

This game can be bought digitally via Steam or via the Nintendo Switch store.

Thank you to Affable Games for providing a review copy of the game.

Newton and the Apple Tree – Review

Newton and the Apple Tree explores the ideas of the issues which come with time traveling into the past and Sir Issac Newton, in reality being a flat-chested genius girl. While it does include a hefty dose of humor, some absurd ideas and a sprinkling of sexual content (if you use the free 18+ patch), […]

One Step from Eden – Review | A Foot at a Time

Introduction For a year and a half, I’ve followed this game quite closely. My obsession for it came about once I heard it’s inspiration. See, growing up, I was a huge Mega Man fanboy. However, there was always a certain spin-off that escaped me. One Step from Eden is inspired by the Battle Network titles. […]

All Games All Posts Horror Indie

Infliction: Yet Another Iteration On The Tried, But Terrifying P.T. Formula Before you look at Infliction: Extended Cut and run away at the mere mention of “Silent Hills spin-off,” hear me out. I know horror fans have grown a bit numb to the prospect of psychological hallway simulators, and for good reason. Ever since we […]