Super Neptunia RPG (also known as Brave Neptunia) could be described as an older spin on an old series, rather than a new spin. This title takes the Neptunia cast from 3D into 2D as an RPG designed by the French company, Artisan Studios. It is playable on the PlayStation 4, Nintendo Switch and PC which I personally played the game on.

The idea behind this game (and the Hyperdimension Neptunia series generally) is that the world consists of several nations, which are all based on game consoles and their respective companies. For example, our main character Neptune is from Planeptune. It represents Sega and related consoles. All of the nations are lead by Console Patron Units (CPUs) who represent consoles, such as Neptune for the unreleased Sega Neptune console or Plutia for the Sega Mega Drive.

The series as a whole is filled with humor, memes, game references, and fourth wall breaking. There is fanservice (with the occasional risqué scene) and it is very much geared towards fans who would appreciate anime and game humor. This particular installment does feel more toned down than some of the others, but it keeps the same spirit. 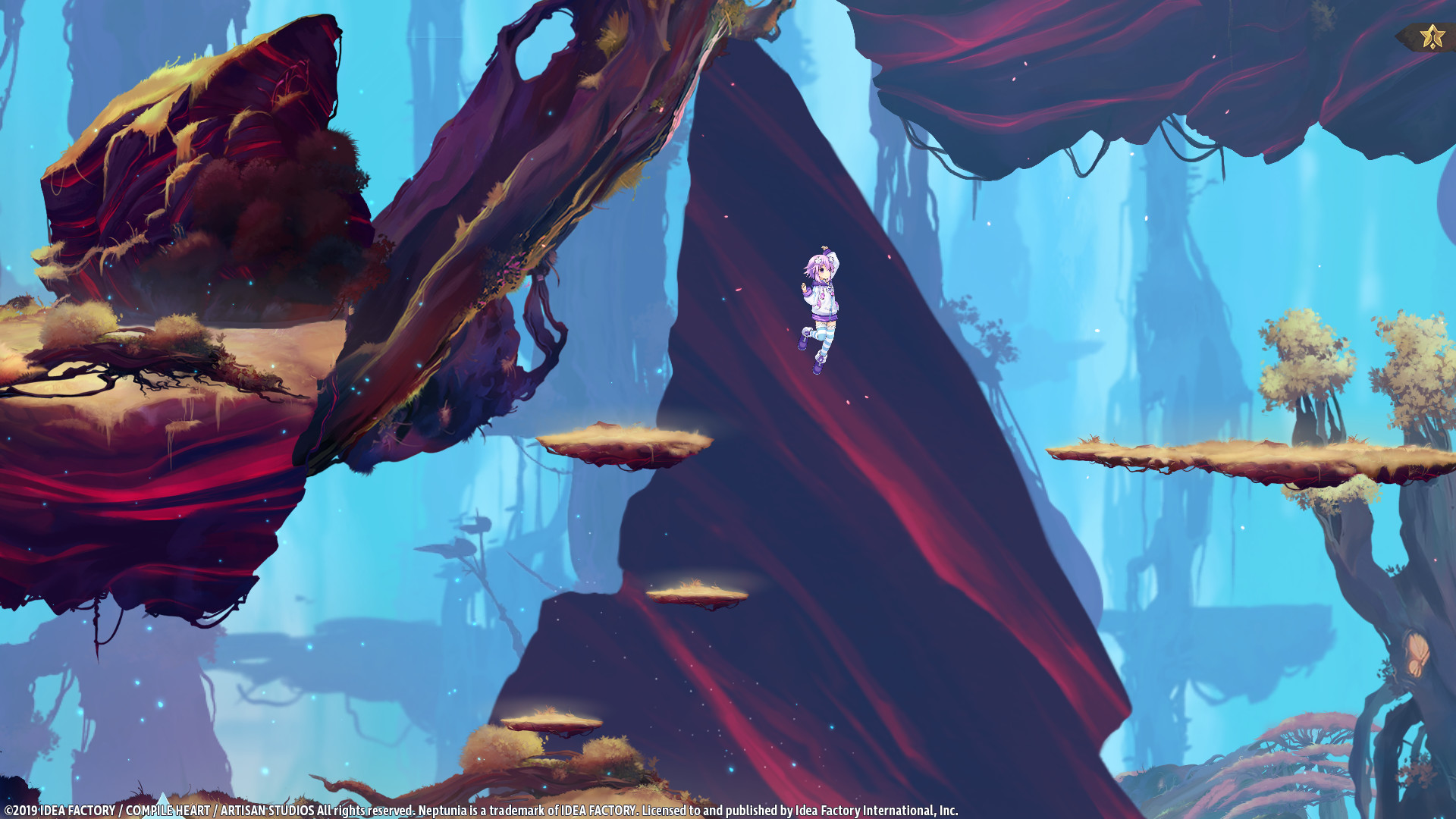 After a quick movie and battle tutorial, the story opens in Lastation with Neptune having lost her memory. This is not the first time that it has happened in the series and she even jokes herself that it isn’t a cliché.

A uniformed man from a group named Bombyx Mori appears, asking Neptune to pay her taxes. It is explained that in this world, a ‘kid’ named Filyn is in charge and Bombyx Mori is her group. Citizens are forced to give them games as taxes or be punished. While the group is obviously (to all but Neptune) set up as the enemy, the man takes pity on Neptune and sets up a job for her to survive.

Soon enough Neptune finds out that Bombyx Mori isn’t as nice as she thinks and that there is a resistance set up. She runs into a mysterious character named Chrome who seems to know her but won’t explain. While exploring the world, she soon runs into her fellow CPUs Blanc, Noire and later on Vert who have all lost their memories too. 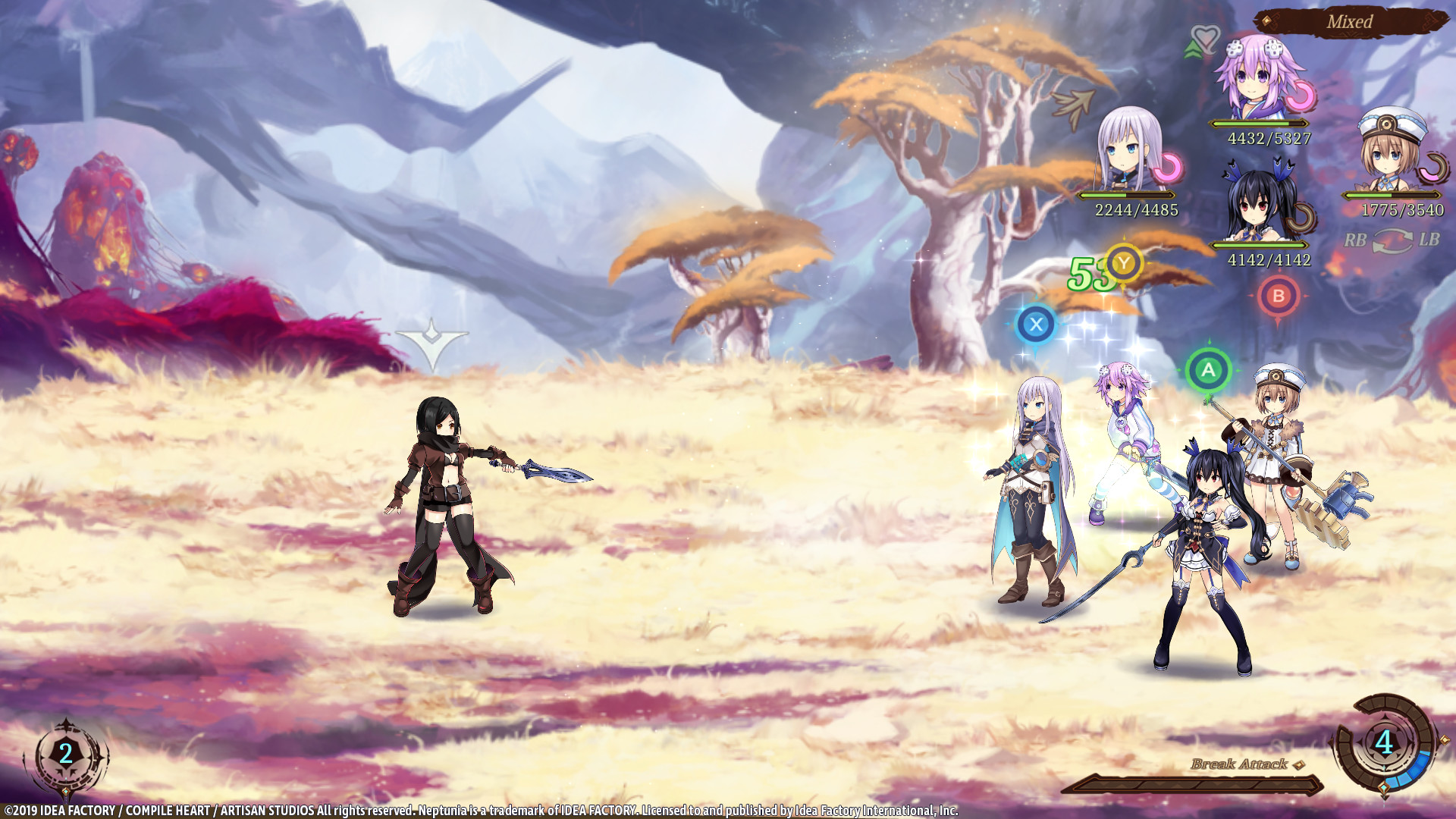 Overall the story isn’t too serious and the script and events are full of comedy. It’s about what you would expect from a Neptunia game. While some may worry as this is the first installment in the series by Artisan Studios, Compile Heart who usually work on Neptunia were in charge of the main storyline and cutscenes and reviewed the rest of the work.

The gameplay is split into two main aspects. The first is the majority of the gameplay where you walk, jump and dash left or right to explore the 2D world. You can explore towns and dungeons this way. It involves some mild platforming elements, such as jumping and dashing over gaps, finding ways to reach item boxes or moving quickly to get pickups before they disappear.

In towns, you can interact with people as in a standard RPG. Press the button and their speech bubble pops up. This includes the standard shops for equipment and items too. You can save at save points and transport between them too.

The story is mostly told through cutscenes with speech bubbles popping up and scripted movement in this 2D view that you explore the game in. There are occasional visual novel style scenes, but these are few and far apart.

Quests were explored here too. The majority of these were standard fetch quests with the occasional kill quest. Sometimes they were for unique items found by completing a dungeon, but often they were for regular items found in the field or shops.

I did have some issues with this part of the gameplay. The movement sometimes did not feel smooth. Environments and characters were often reused too, to the point that it felt lazy. Dogoo monsters were used in the environment to represent a variety of enemies. You could see the exact same boy character sprite with three different names even within a few screens of each other near the start. Some fairly obvious mistakes were made too, such as using the wrong character sprite in some scenes and strange design choices such as having the dungeon map tutorial appear after navigating a dungeon.

I personally didn’t feel like the quests were done well either. You come across tons of optional quests and the majority of them have no importance. Rewards often are not clearly stated. Some quests can not even be completed at the time they become available – for example later on you get a Puddingo monster to enable high jumps, but there are quests before that which require it. With so many quests it would have been good to have more indication of where the person involved was too, other than a blurb just mentioning their town or dungeon. A mark on the dungeon map would have been ideal.

The other main aspect is the battle system. It seems simple at first as you press a button and if the gauge is filled enough the corresponding character will use a single attack. There’s also a special break attack with its own gauge which fills up as you attack the enemy.

As you get further into the game, you find there is more to it. While each character can only use a single attack, this attack can be selected and changed before the battle. Depending on the characters in the party, you can change formation too, which changes the attack you have selected. For example, you could be in one formation and have Neptune and Blanc with a single melee attack and Noire with an area melee attack, then change to another formation with Neptune and Noire using curative magic and Blanc using defensive magic. A third formation might be a variety of elemental attack magic.

As well as magic learned normally, spells can be learned from equipment. If a piece of equipment has a spell to master, you can use it immediately while equipped and after using it enough, use it even when unequipped. Abilities can be learned this way too, which can be selected in the menu to boost stats while enabled. 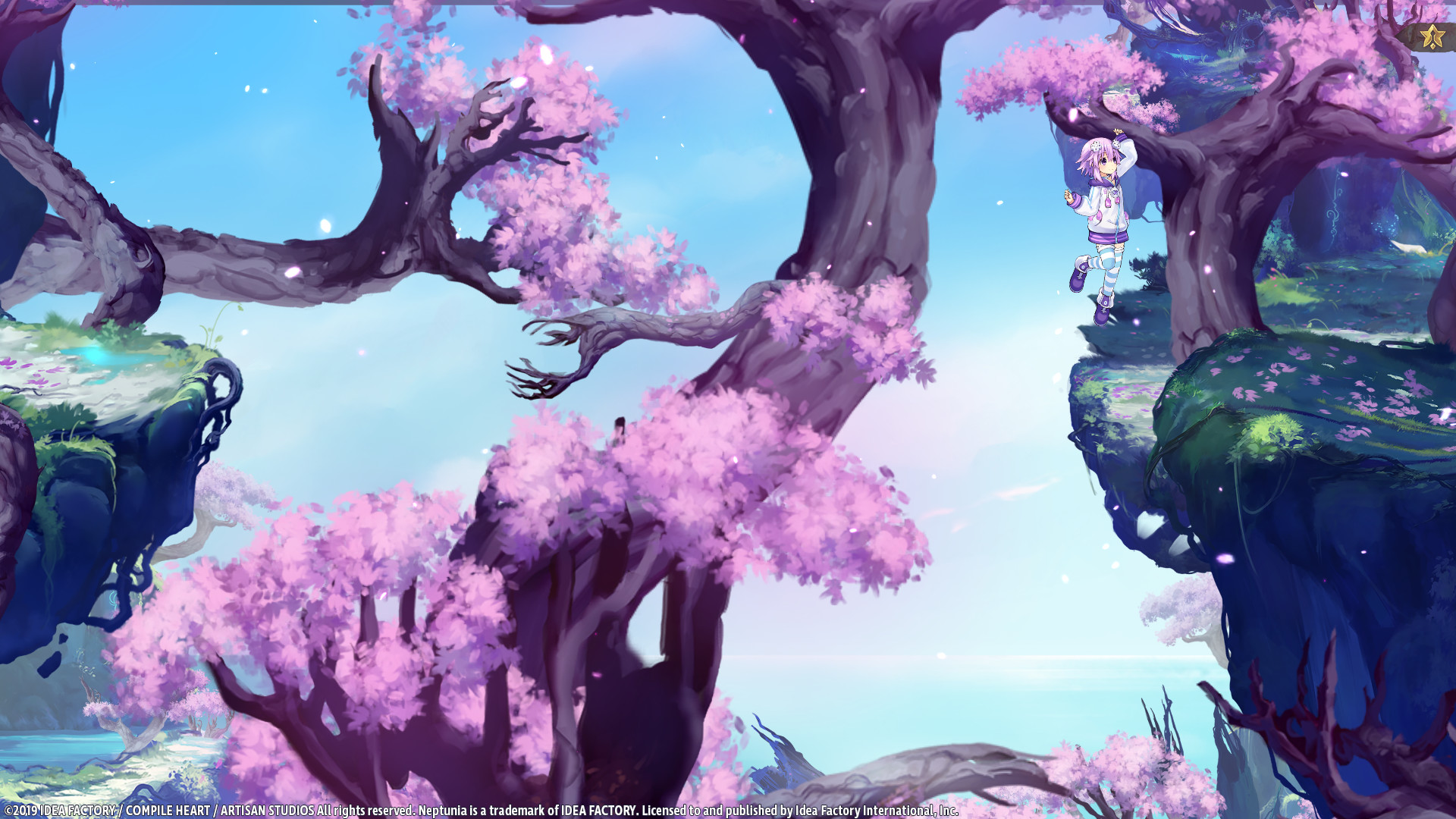 While my initial impressions of the battle system were not great, after the game explained more of the features and I explored them, I grew to appreciate it quite a bit. I’d encourage players to stick with it until these features are unlocked before writing it off. I was particularly appreciative of a way to fast forward too.

I did enjoy the graphics on the game. The 2D style works well for Neptunia. The characters are always animated, swaying side to side, moving their mouths when talking and so on. Some of the backgrounds were done particularly well.

The sound is done well, with a decent soundtrack and voicing for the characters. As always with Neptunia games, the voicing is done very well in both English and Japanese.

I always enjoy the Neptunia series games and despite my issues with this title, I did enjoy it and I think that most Neptunia fans will too. I enjoyed the story, characters, and humor which Neptunia always does very well. I do feel like there is room for improvement however and would recommend that players new to the franchise start elsewhere.

This game can be bought here on Steam or via the PlayStation/Nintendo console stores.

Many thanks to Idea Factory for providing a review code for this title.

The Agarest series has continued for over ten years and several titles now. The idea has been basically the same throughout though – that several generations of a family must continue their quest. You play as your initial character and eventually play as his descendants. In Record of Agarest War Mariage, your quest is to […]

Newton and the Apple Tree – Review

Newton and the Apple Tree explores the ideas of the issues which come with time traveling into the past and Sir Issac Newton, in reality being a flat-chested genius girl. While it does include a hefty dose of humor, some absurd ideas and a sprinkling of sexual content (if you use the free 18+ patch), […]