Sankaku Renai: Love Triangle Trouble is a visual novel by developer ASa Project. The story follows Sousuke, an otaku and student living in a rural town. His family has split apart and now he lives with his father, stepmother, and stepsister.

This is a light-hearted romance comedy story. It’s could be classified as slice of life, with most of the focus on the characters and their interaction. It contains quite a few jokes on sexual topics, as well as sexual scenes.

If you are buying this game on Steam, a lot of the mature content has been cut out. A free 18+ patch can restore this. This can be found on the NekoNyanSoft Store. The content itself is, for the most part, fairly standard with four sex scenes per main character and two for each side character.

As you start the story, you meet the members of the ‘B Team’. This is your very casual school club, which focusses on otaku interests; anime, video games, cosplay and more. While it is a club, it acts more as an excuse for the members to hang around and do what they want, rather than actually having club activities. 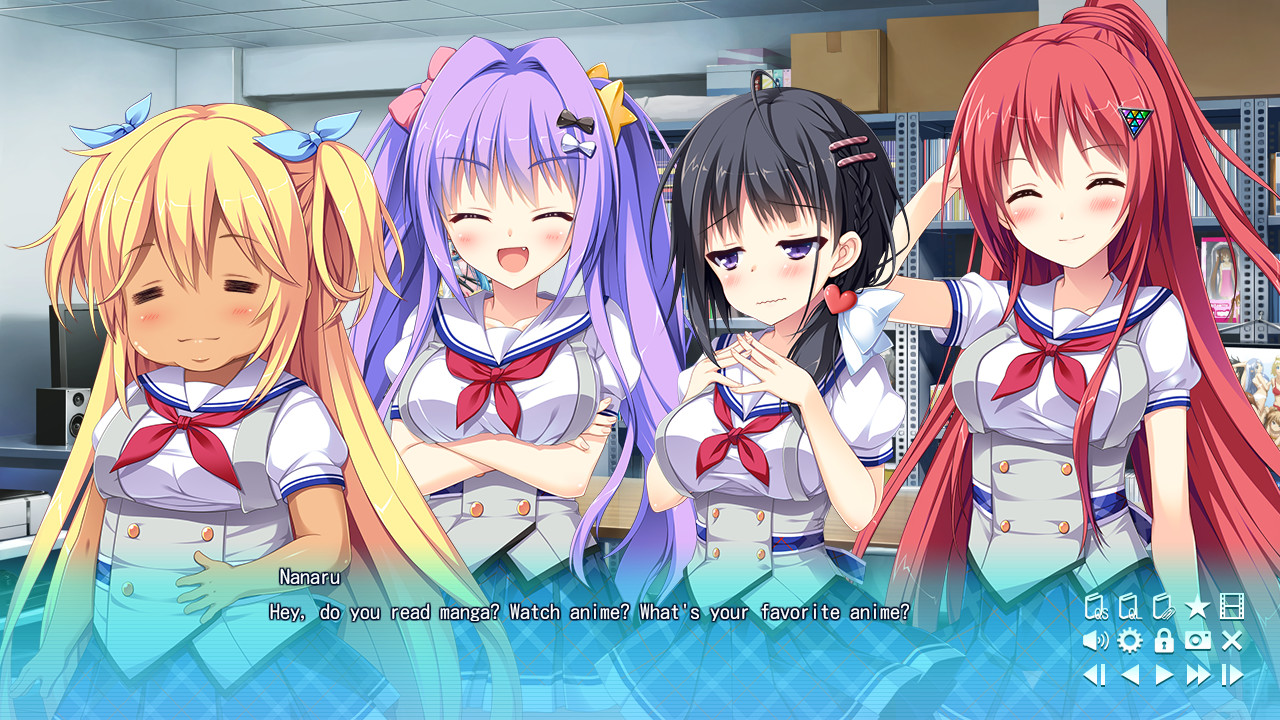 It is explained that your mother and father split apart, each taking one child with them. You have a blood-related sister whom you haven’t seen since you were a child called Suzu. Events soon happen that have your sister reappear and move into the same home with your family. This is difficult for your stepsister Nanaru to deal with.

Outside of home, a new person appears at school too. A girl named Shiina suddenly joins your club, but she makes it known that the club isn’t her primary objective – you are. She aggressively pursues a relationship with you. Your childhood friend Maho finds her difficult to deal with.

Life continues on as everyone adjusts to the new situation. You go through school and attend the club as normal. You spend time with both old and new friends. You go through a few events as a group. Much of the focus here is on getting to know the characters and showing how they develop in reaction to the new circumstances. 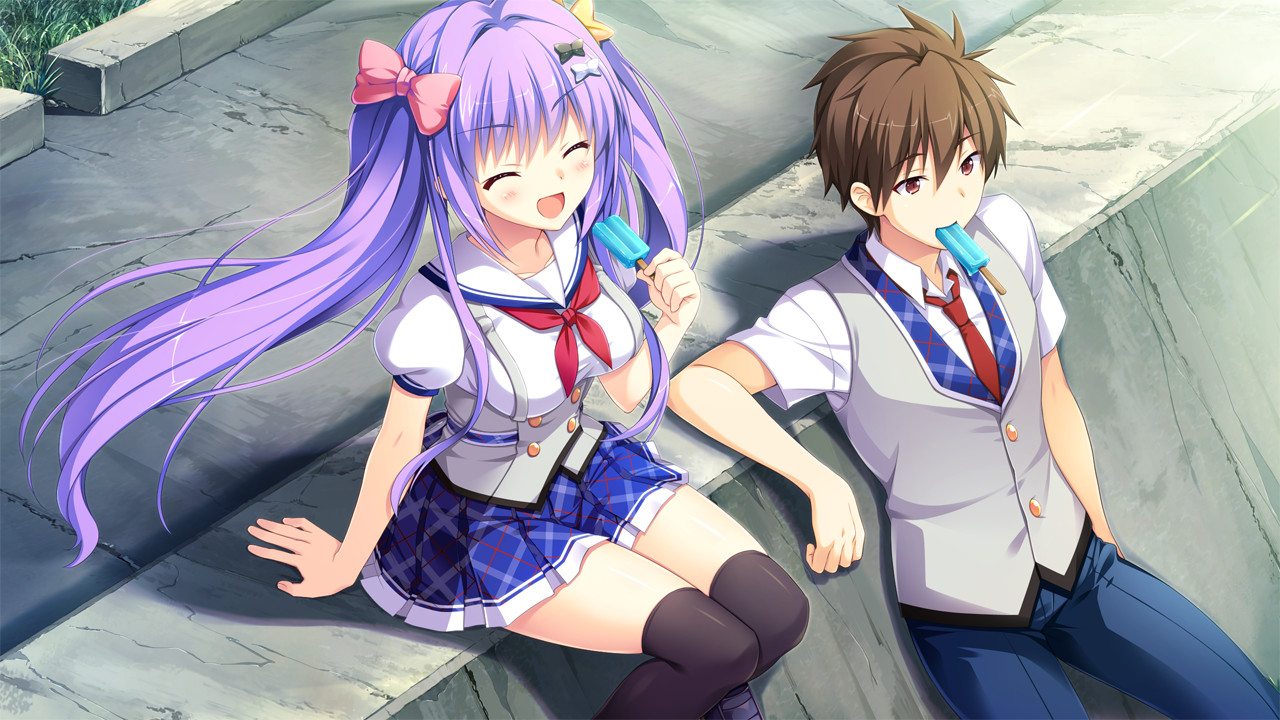 The game is filled with jokes, meta humor, and fourth wall breaking. It had me laughing out loud during a lot of my playthrough. There are mentions of how they can’t say their ages and the over 18 disclaimer, about losing their main heroine status, about going for the (non-existent) harem ending and other direct references to it being a visual novel.

There are memes, references and sexual jokes in almost every scene. It does feel like it’s very geared towards people who are strong into anime and visual novels, often making references towards the subculture, the topics themselves and using terms like ‘gap moe’ and ‘NTR’. It’s not one for people new to the genre.

Despite having a strong focus on humor, the story and character development are done well. Each of the main heroines shows growth or hidden depths beyond their initial character archetype, if not a huge amount.

About two hours into the story, the game splits into two routes depending on the choices you have made. The sisters’ route featuring Nanaru and Suzu and the love route featuring Maho and Shiina each cover a love triangle. These two love triangles are what the title refers to. Each route focusses on the relationships between all three characters involved in the triangle. It then further splits into a route for one of those two characters, or a side character. This makes a total of four main routes and two side routes. 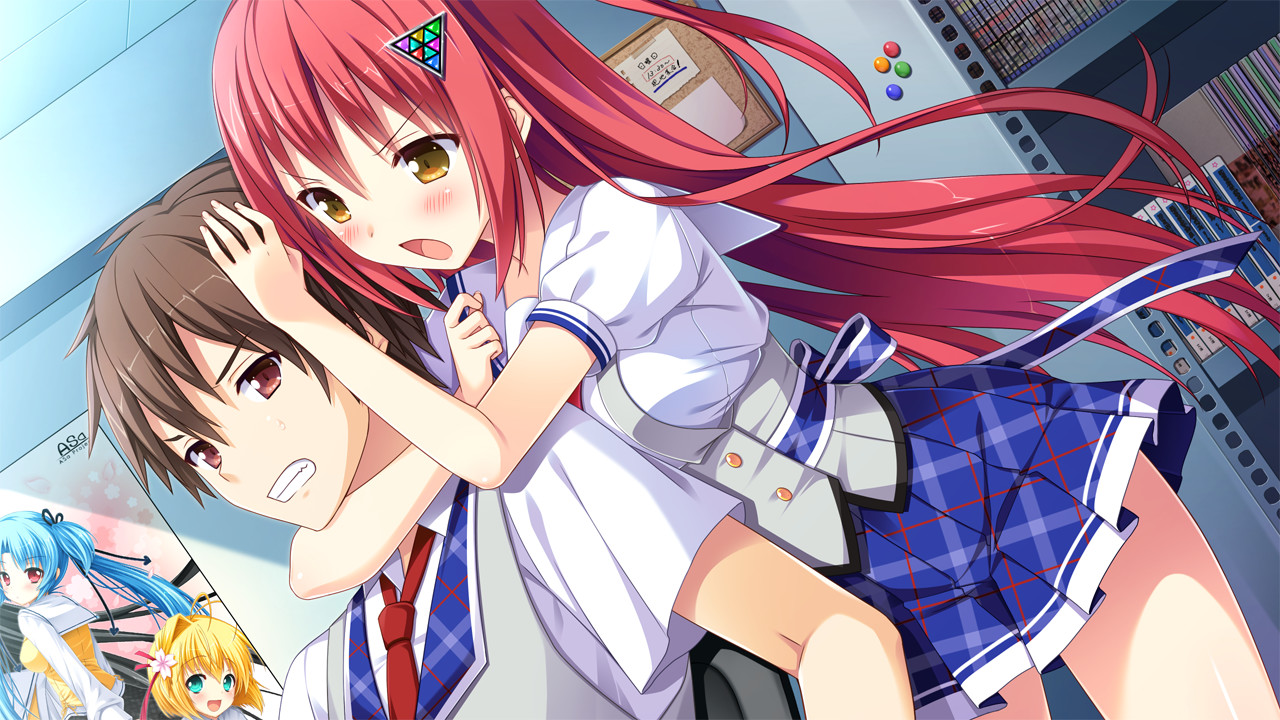 The first girl you meet is your Stepsister Nanaru. She is cocky about her appearance, being quite proud of her beauty and large breasts. Nanaru is known for always cracking dirty jokes and acts carefree most of the time. While she’s not the smartest person around, she is outgoing and very likable. She is obsessed with an idol anime series.

Suzu is your blood-related sister who reappears. She is almost Nanaru’s complete opposite, being timid and innocent, though she does open up as the story develops. Her grades are better, both due to her intelligence and diligence. She enjoys anime, but unlike many of the other characters, she does not seem to have an obsession.

Maho is your childhood friend. It is explained early on that she once rejected Sousuke. Despite this, she acts very protectively of him. She acts rather reluctant to get closer, perhaps due to her experience. She is extremely competitive and is obsessed with fighting games.

Shiina is the newest addition to the club. Again, she is almost the opposite of Maho. She is strongly attached to Sousuke and shows it at every opportunity. Shiina talks non-stop, she acts clingy and even at times like a stalker. Her obsession is eroge and she takes it further than any of the others with her obsession. She constantly makes references to it and acts like life is an eroge. Even the other characters can find her to be over the top at times.

The two side characters with short routes are Akane and Cara. They are both fun characters, but we don’t see them in as much depth. Akane is mostly shown as being obsessed with ‘boys love’, but being lazy elsewhere. Cara is a foreigner who talks oddly and is interested in cosplay and makes constant references to history. There is also ‘Prez’, who is the president of the club and doesn’t even have a name. He is addicted to mobile gacha games and spends all of his money on them. 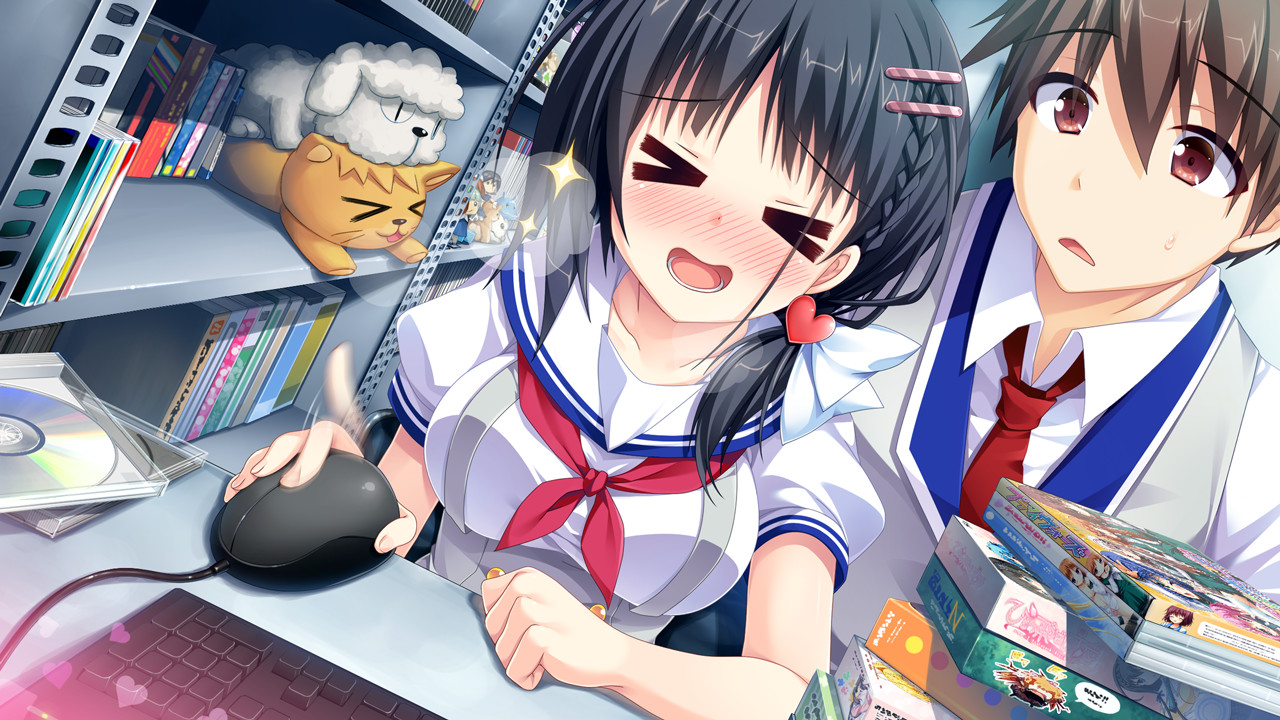 I enjoyed all of the characters. Their interactions were done incredibly well and were really what made this game so funny. The way that the characters mirror each other works well too. Certain characters may seem a bit bland at first, but as the story progresses they show more of their personality.

I personally enjoyed Shiina’s route the most, but some may find her annoying. You do see more of her good points going along the love triangle route, but she can be too much at times. She is a love her or hate her character.

Suzu’s was my second favorite route, but I actually liked how she was portrayed in routes other than her own too. The trap of purely focusing on one character’s development per route was avoided luckily.

All of the main heroine routes were great. The side heroine routes were nice to have, but I do wish they were longer and more in-depth. If someone played without the 18+ patch, it would probably take about ten minutes to complete each. They were basically summarised as ‘stuff happened, now we’re dating’, then jumped straight into it. 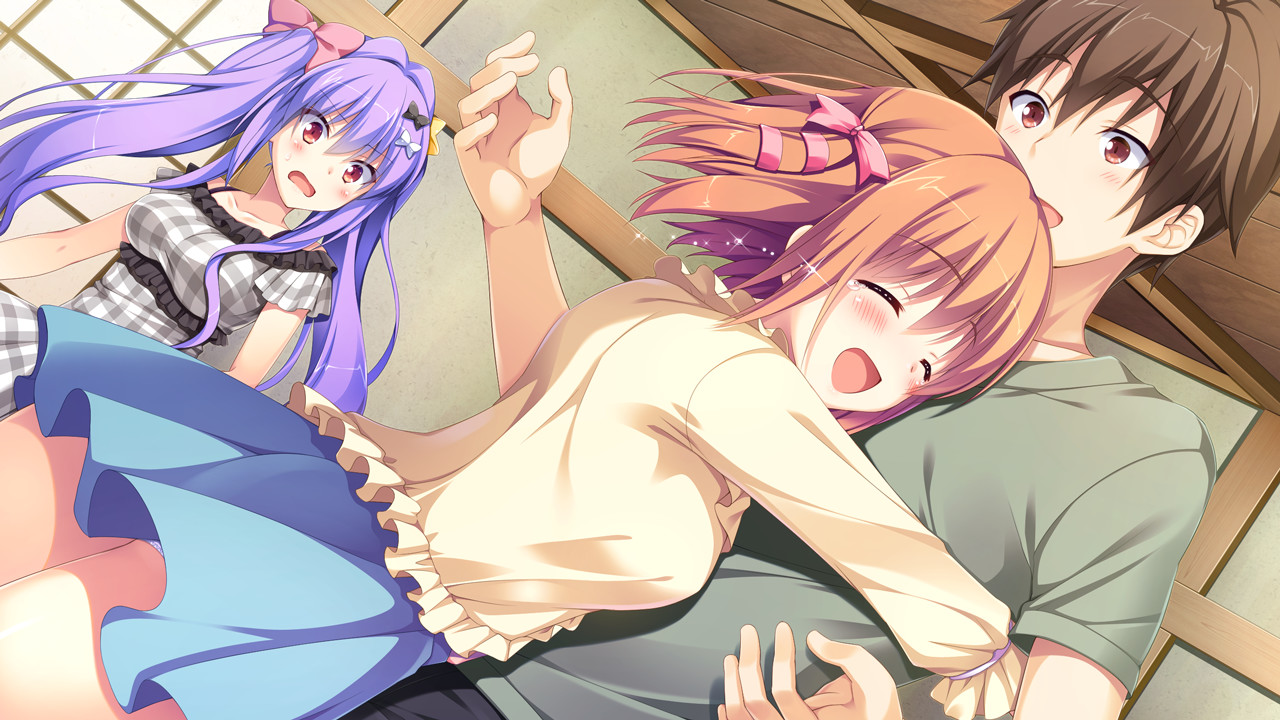 I personally took 14 hours to complete the entire game. This was making use of saving at choices and skipping previously seen text. The game has a useful feature to skip to chosen scenes too.

The writing and editing itself are very well done. The translation certainly isn’t a literal one in many places, but that’s not really possible with this type of game. They’ve done a great job with the jokes and references particularly.

I found that the artwork is all to a very high standard and there are quite a lot of regular CGs, with a few super-deformed style CGs. The character sprites are detailed too and have quite a range of expressions.

The music is well done with a good variety of 26 tracks. These cover quite a few different situations and fit well into the scenes. I really enjoyed the voicing too. The named characters other than the main character are all voiced and fit the characters.

The options are fairly robust, with individual volume controls per character, options surrounding animations, dialogue and more. There are Steam achievements too for those who own the game on Steam. 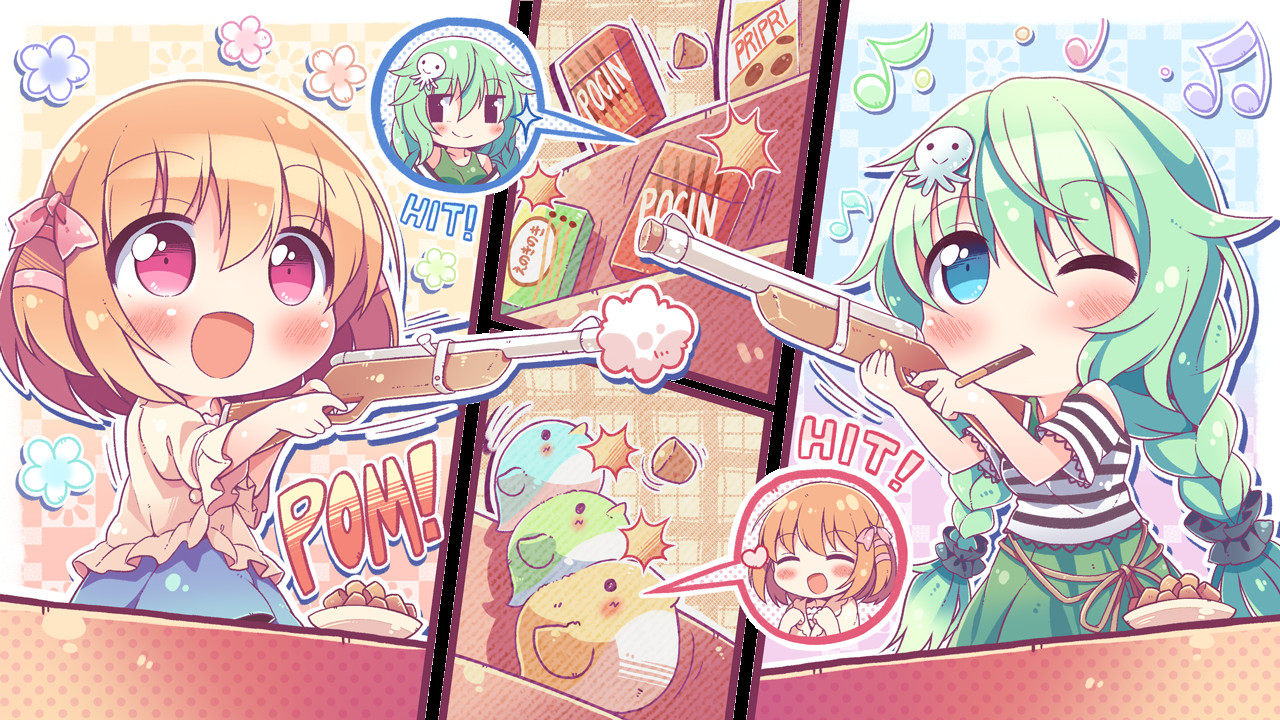 I would personally recommend Sankaku Renai: Love Triangle Trouble to experienced visual novel fans who enjoy games with less focus on story, but more on characters and comedy. All of the characters are likable, all of the routes are interesting and production values are high all around.

Many thanks go to the publisher NekoNyanSoft for a review code for this title. Purchases made by Denpasoft links earn a small commission which goes to help supporting domain and server costs.

All Games All Posts Puzzle

Interrogation: You will be deceived – Review

I am not gonna lie in this review, but this game certainly will! Welcome to Interrogation: You will be deceived, a game developed by Critique Gaming and published by Mixtvision! This game is available on PC, Mac, and Linux and can be bought on Steam, Humble Store or GOG. Interrogation revolves around your job as […]

Grab your swords and gather the wedding rings because we are getting into the eleventh title in the famous SRPG series developed by Intelligent Systems and distributed by Nintendo for the Nintendo 3DS, Fire Emblem Awakening!  If you’ve never played a strategy RPG before or you’ve somehow never heard of RPG games before, let me […]