The Last Birdling is a Western Visual Novel/OELVN and the seventh created by InvertMouse. This title is only available on PC. Rather than the typical romance which visual novels often focus on, this is a story of an unlikely and forbidden friendship.

In this world, a species of winged humanoids called Birdlings used to fill the forest. This continued until an event known as the Birdling War, where humans wiped them out to what they thought was extinction. Any Birdling found alive would be considered an enemy of humanity and would be killed.

The story explores why birdlings and humans are enemies and it does quite a good job at building the world. That said, The main focus here is on the two main characters.

Two children, one a human girl and one a birdling girl came together in a chance encounter in the forest. The human Tayo and birdling Bimonia become friends and the story follows them through their lives. 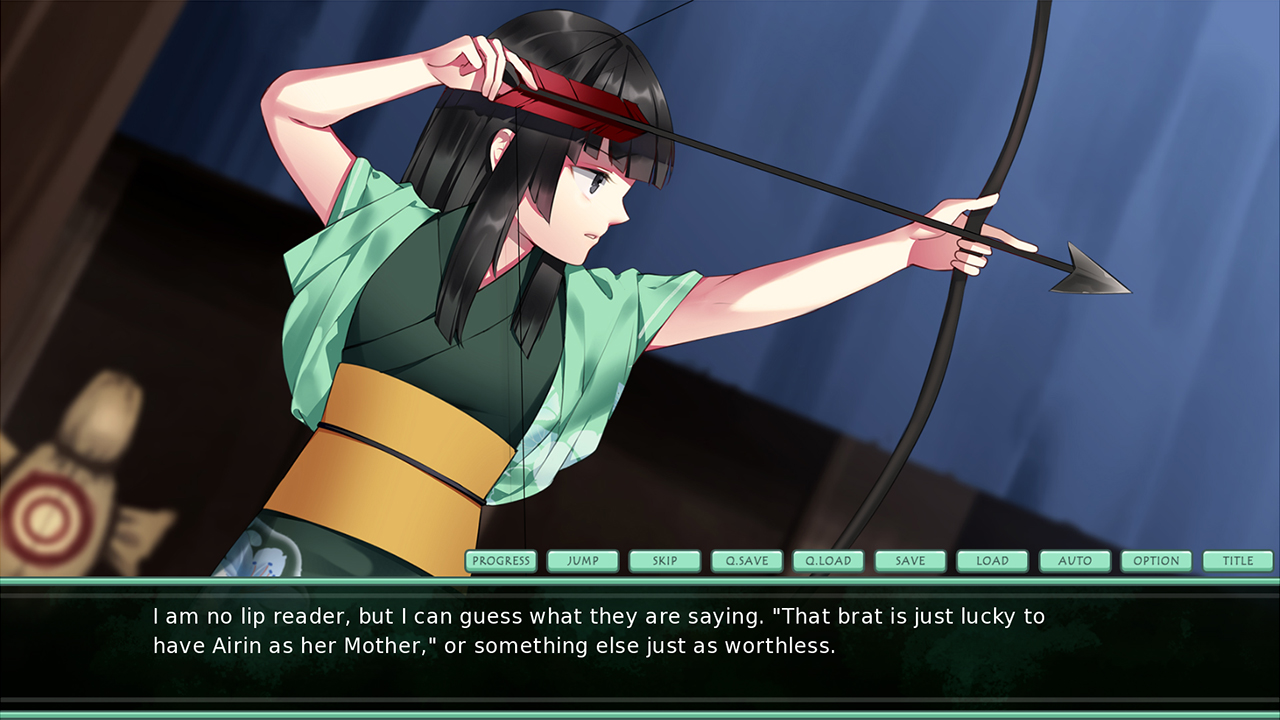 Tayo has to keep Bimonia’s existence a secret from the humans or else they would hunt her down. Bimonia has to prevent her mother from deciding that Tayo is too much of a threat to live or otherwise trying to separate them.

To add to this, Tayo is the child of the village’s best archer and better than most adult archers herself. Birdlings are much stronger than humans, but they can be killed by poisoned arrows or blades. They would be expected to be at the front of any birdling hunt.

As a warning, this is not a happy story. It involves betrayal, death, and other disturbing topics. This story is written in a serious tone throughout. In particular, Tayo can be quite ruthless. She notes at one point that Bimonia is the only thing which keeps her acting kind. However, she is not the only one who acts in a negative way. The world created in this story is a harsh place.

The story consists of two parts and throughout it, you can make choices. The choices tend to be either related to your relationship with the other character or about how kind you wish to be. 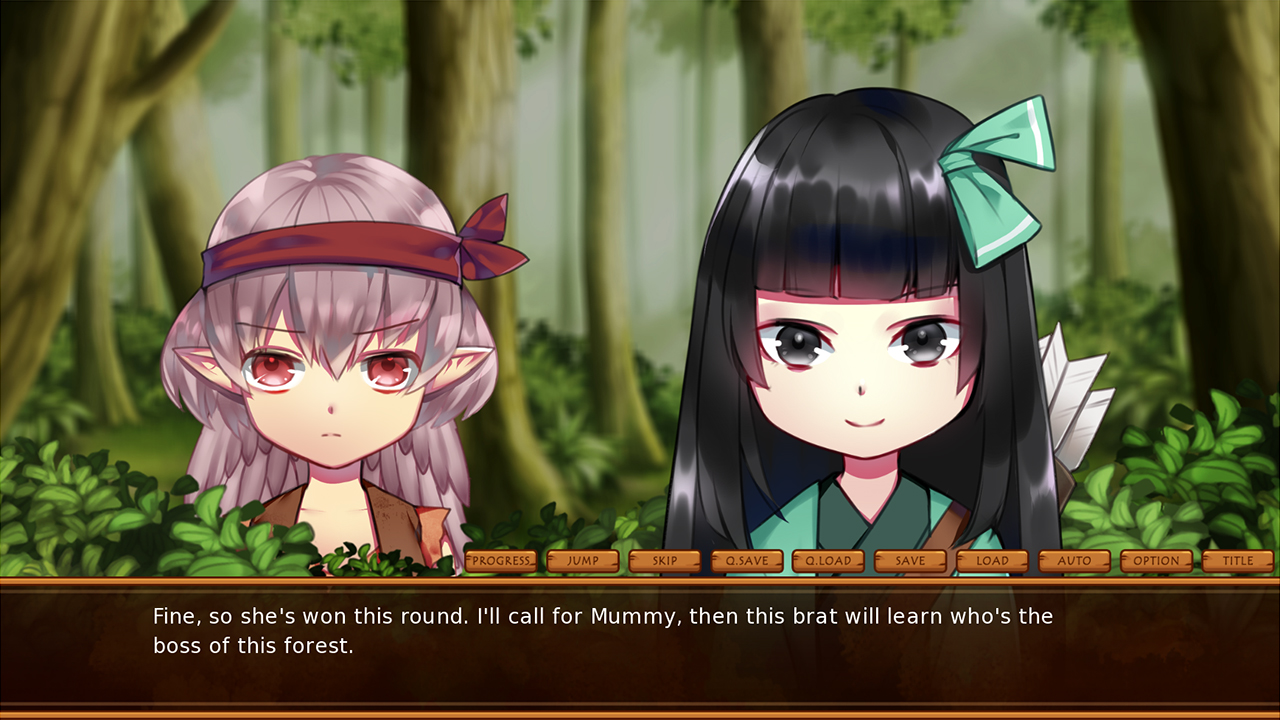 The first part of the story focuses mostly on the struggle to keep their friendship but later has a serious event occur which gives the story a darker turn. This event seriously changes the lives of Tayo, Bimonia and those around them.

The second part of the story occurs after a time skip. Both Tayo and Bimonia are older but do not seem to be adults yet. The characters have grown in such a way that you can see how the events have affected them.

This culminates in an ending scene. This game does not include full routes, but depending on your choices you will see one of five possible endings.

While I do not wish to provide any spoilers, I will say that this can be quite a depressing story and it can get very dark at times. That said, there is always a good reason for this. If a bad event happens, there is generally a purpose behind it. 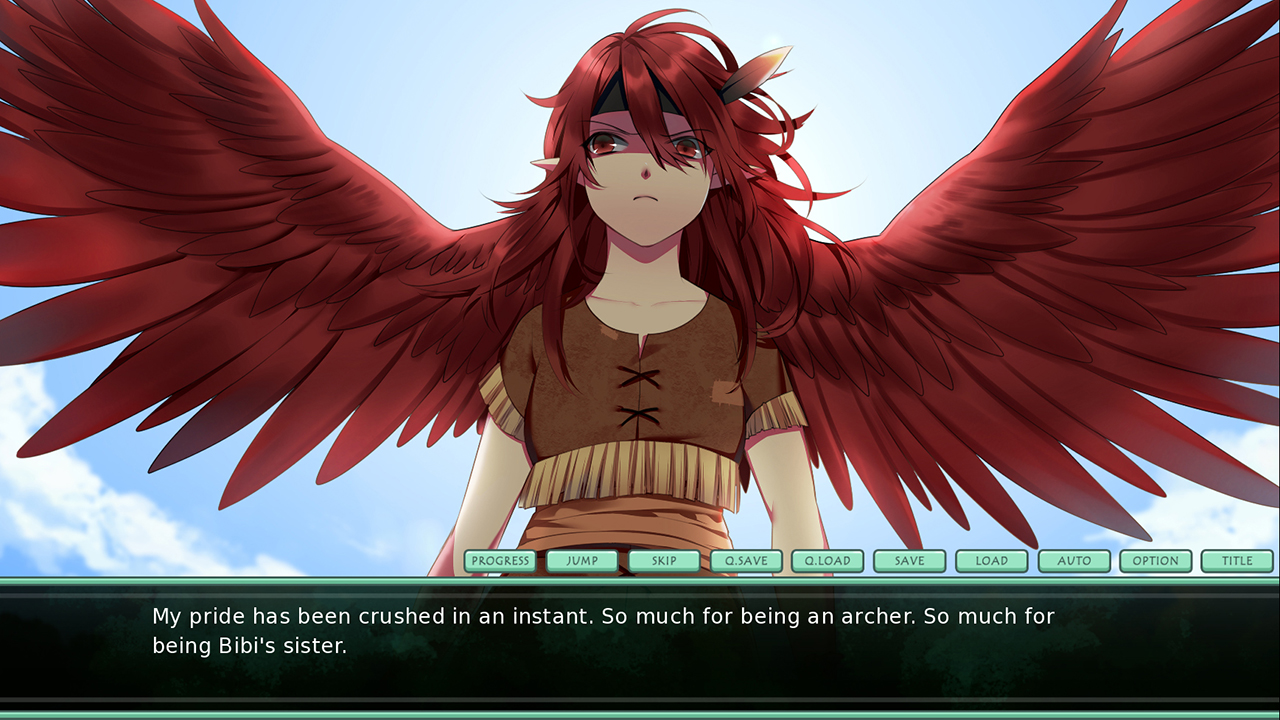 Overall I found the story to be very well written. The characters actions felt believable based on how they were portrayed and I found it interesting to follow the plot the entire way through.

One point which I particularly liked was that many of the characters were shown to be flawed. They were often in conflict with themselves and were often outright shown as being not particularly good people. This doesn’t seem to happen in many visual novels.

Certain events are foreshadowed but are not obvious until they happen, which I felt was done well. I enjoyed all of the endings but should note that many of them were very similar to each other. 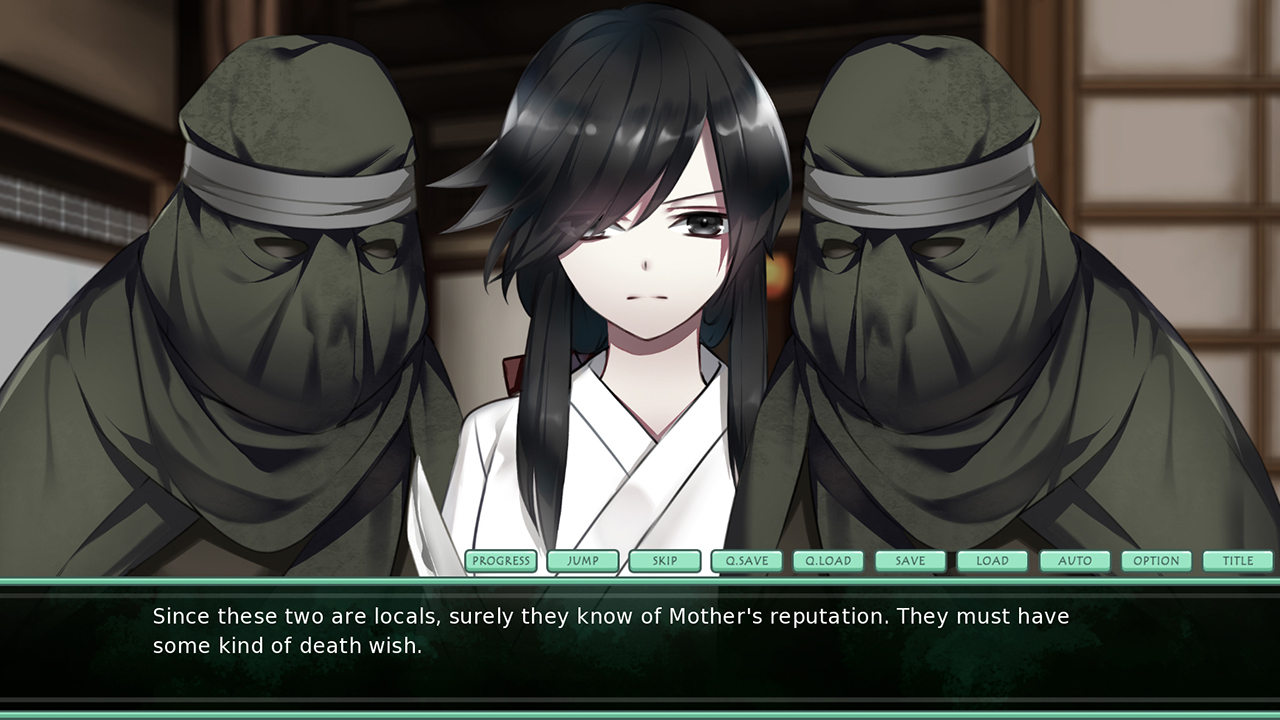 Another aspect of the game which I enjoyed was that it showed the story from switching dual perspectives. Generally, each chapter was fairly short but was entirely from one character’s point of view, then it switched for the next chapter. This helped to keep things more interesting and felt like it changed the tone of the narration each time.

The only real complaint I had with the story didn’t really pop up until the end. It’s minor, but after reading the entire story, the background of the world felt less believable. As said, it didn’t really click until the end, so it’s not a huge problem.

I personally took about two hours to complete a single playthrough of the story. To get the multiple endings did not take much longer, due to a handy implementation of the ‘Jump’ feature, which jumped to the next unread text or choice. 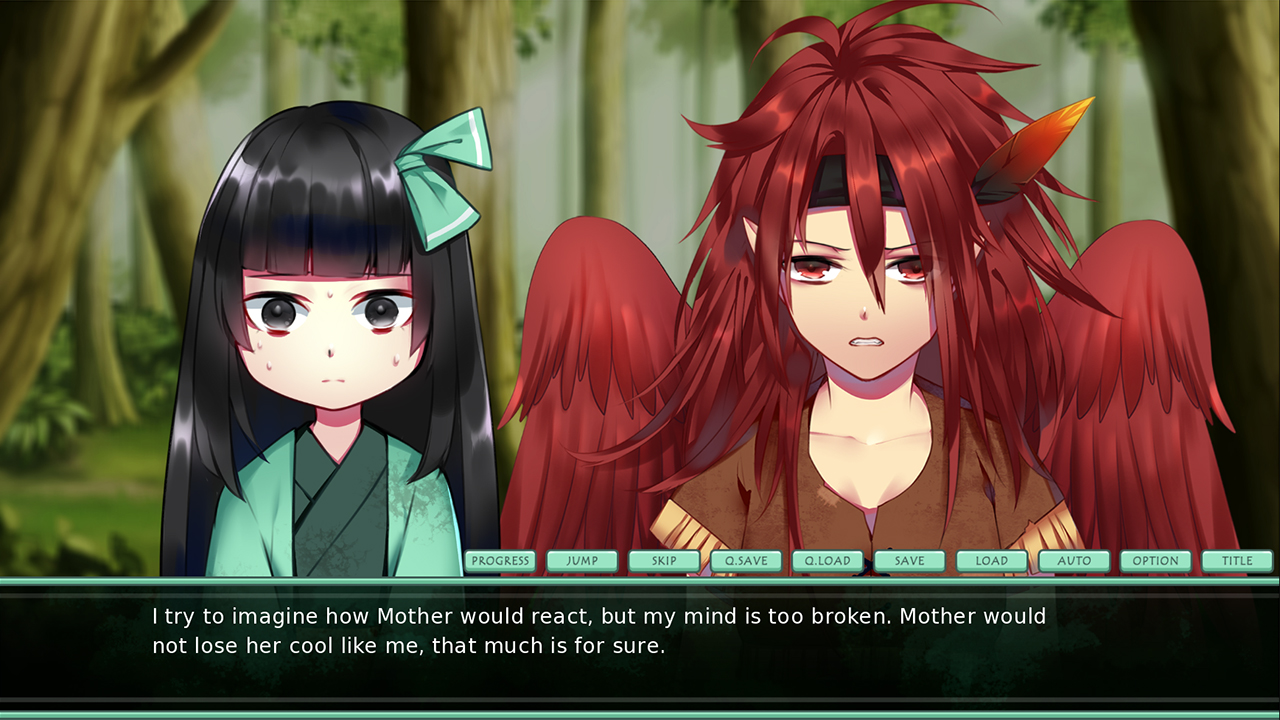 The way the choices and endings worked was done well I found. Each choice gave the chance to gain some ‘Tayo points’ or ‘Bimonia points’. Depending on the amount of each type of points gained, the ending changed. For example, if your choices showed that Tayo cared about Bimonia, but Bimonia did not care about Tayo, the ending would reflect that. I found this system an interesting way to handle the multiple endings.

The artwork was well done overall. I should note that Western visual novels do not usually measure up to the Japanese ones, which often have higher budgets. The CGs stood out as particularly good, though I did find the difference between how the characters looked in their sprites and how they looked in the CGs a bit jarring.

I enjoyed the background music and found it to be of high quality and fitting throughout. There was no voicing included in the game. I don’t really felt like it suffered for it, but some people do strongly prefer voicing so it is worth noting. 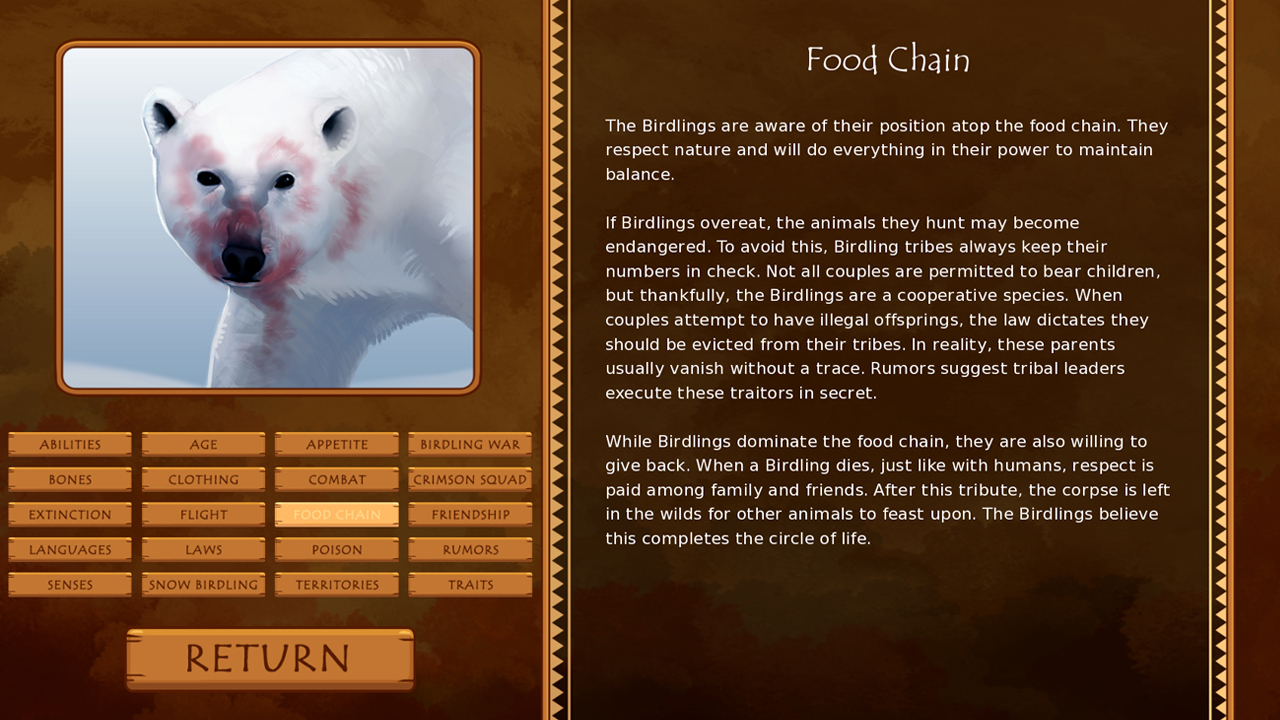 The game has basic options and a CG gallery. One bonus feature is that it includes a glossary which provides a lot more background information.

Throughout the story, the glossary is linked which can be helpful to learn more at the appropriate times. I appreciated having the feature, but I would warn players not to read through ahead of time for story reasons.

As visual novels do have the reputation, is it worth noting that this contains no scenes of an adult nature. While I wouldn’t say this is family-friendly due to certain topics, no sex or gore appears in the images. I do feel like some of the particularly shocking moments would have been improved by an accompanying CG, but this may have been a design choice to keep the title appropriate for more people. Alternatively, it may have just been budget concerns, which is fair enough with a title of this price.

I personally enjoyed The Last Birdling. It’s certainly not perfect, but it’s well written and costs less than $7 for a different experience than most visual novels provide. I can recommend it for the price.

You can buy the game on Steam.

As a disclaimer, I did not explicitly receive a review code for this game, but I did receive it for free from the developer.

One thought on “The Last Birdling – Review”