Our World is Ended is a visual novel which follows a group of game developers working on a new Augmented Reality game. It explores concepts of Augmented Reality (AR) but focusses more on Virtual Reality (VR). I am playing on the Nintendo Switch, but it is also available on the PlayStation 4 and Steam (PC).

A quick explanation for those less familiar with the concepts. AR ‘augments’ reality, for example overlaying directions while you see the real world. VR replaces reality, so all you see is virtual.

I should add a disclaimer here that I both enjoy visual novels and virtual reality games, so I may be more inclined than most to enjoy this concept. It is a rather popular idea generally though, with several anime based around similar concepts, most famously Sword Art Online. 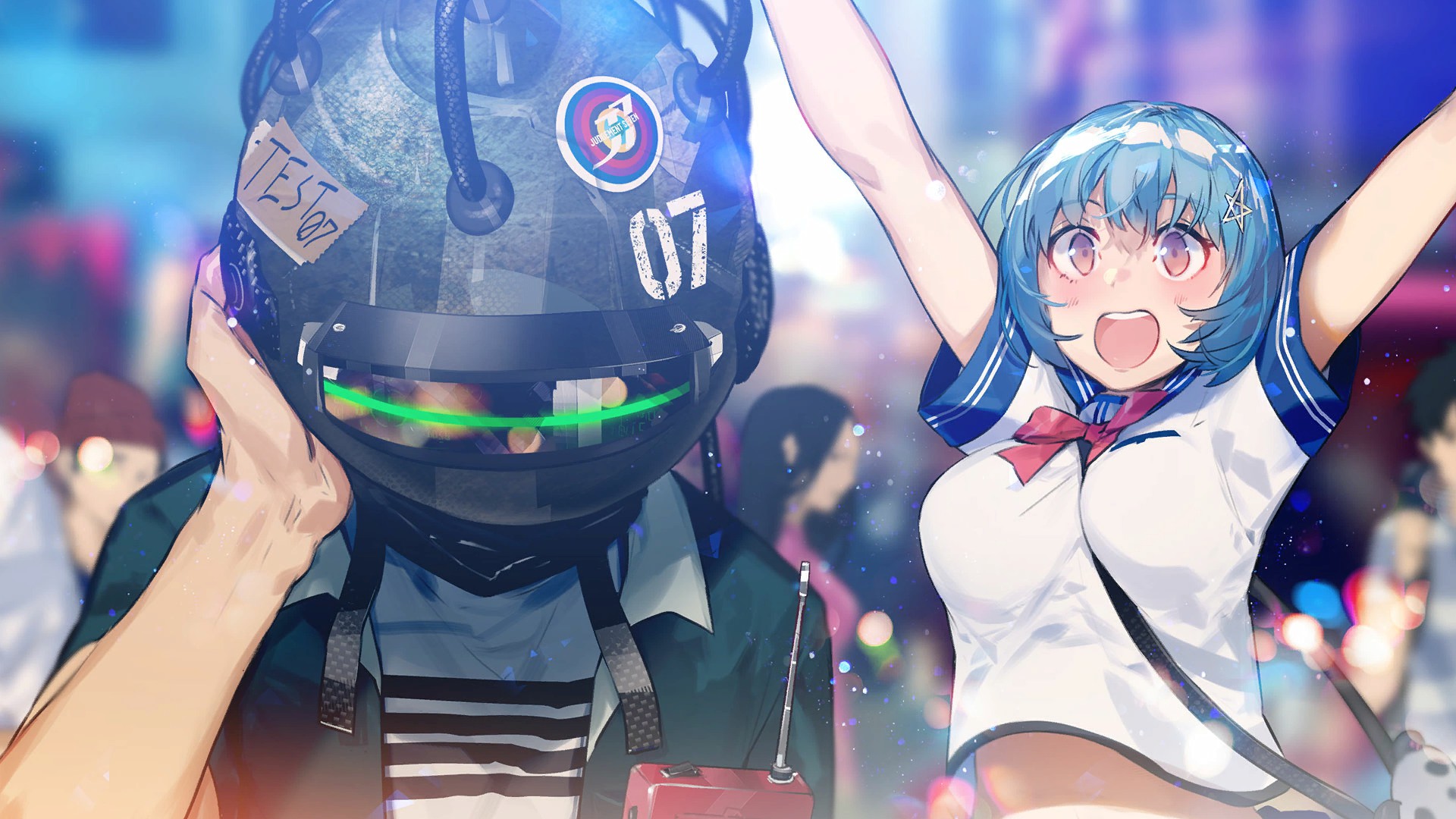 Much like any other game or anime on this topic, AR and VR are treated as unrealistically advanced but it does make for a better story. In AR, for example, your view shows all advertisements changed and your colleague Yuno is shown in a swimsuit. At the moment, some of the best real technology can change hair color, but not clothes. VR is shown as directly interfacing with the brain and being indistinguishable with reality. There is an in-game explanation for this and it is not shown as typical.

In the story, you soon find things not proceeding as you would expect. You start seeing things which shouldn’t be happening. You find yourself in a virtual world, rather than seeing the world through an AR headset. You find yourself unable to move out of a certain area. Characters from your previous games start appearing. Time starts acting strangely. Things start affecting more than just the virtual world and you find there is some very real danger.

As a group of game developers, you are not the most likely heroes. Still, you are drawn into this world and find reasons on why to continue. There is a mystery which is unraveled throughout the story and events related to this are what persuade the team to continue more than anything. 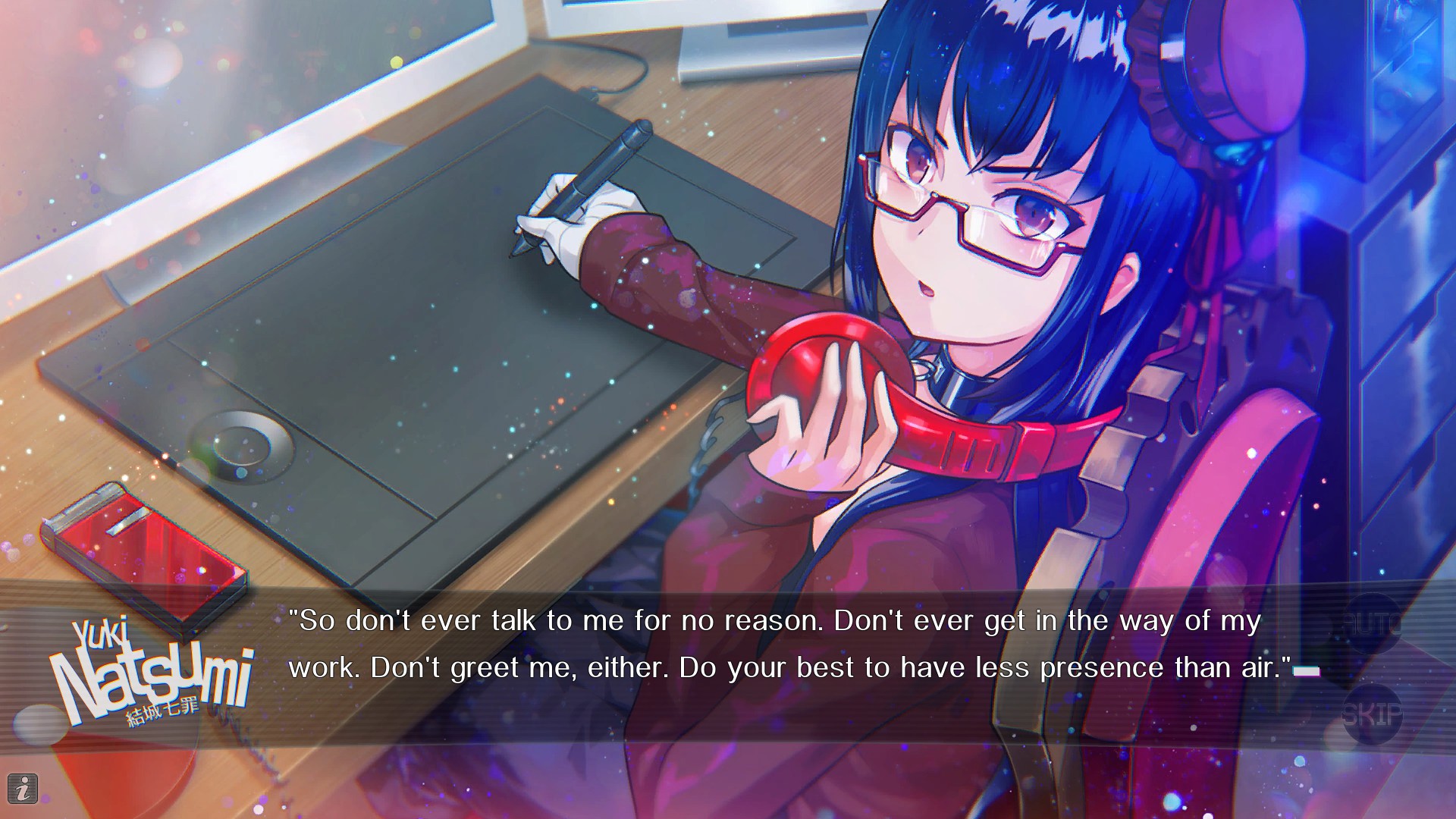 The story is the main focus of this visual novel, but it usually avoids a too serious tone due to the character’s personalities. Things are kept light through jokes, most often of the lewd variety. While base humor is often used, it is mostly kept to the character interactions. There is no censorship in any version of the game, but the most adult thing shown graphically are CGs with a focus on cleavage.

The events are all interesting and the story is well structured, with past events being built on and character development shown through them. Each character gets their own chapter which focusses on them, but does not ignore the other characters and still progresses the story as a whole.

You play as Reiji, a part-time assistant director to the company. You are the newest addition to the team and are not always treated well due to it. You are not particularly knowledgable about your job and seem to do more chores than directing. Reiji’s overwhelming feature is that he is plain.

The boss of the company is Sekai Owari. He is the lead programmer and an outright pervert. Sekai is the one who created the AR headset and the program used to delve into virtual reality. He’s also the one who overlays your AR view with swimsuit girls.

Iruka No.2 is the other male in the group. He is the scenario planner who comes up with some convoluted plots. He is another pervert, but he is more known for being a manchild. If you have heard of the term ‘chuunibyou’, this defines him more than anything. In his mind, he has special powers and a mystical backstory.

Tatiana is a 13-year-old genius programmer, despite looking even younger. While she is a genius in some areas, she cannot do many things herself and acts childish.

Yuno is the other part-timer of the group. She works as an assistant and comes to work in her school uniform. She is known for being an airhead but is kind to everybody. She never seems to mind when other characters act perverted towards her, despite being underage.

Asano is Yuno’s older sister and works as a musician. She is violent and fails in quite a few areas. She has a complex about being flat-chested, especially when compared to her sister.

Natsumi is the artist of the group. She dresses in a gothic style and is rather cold and insulting to people. At times, she exhibits her own mild signs of ‘chuunibyou’, talking about cursing people and binding them with magic.

They are the characters who are with you through the majority of the game. In addition to these, there are also quite a few reoccurring characters important to the plot whom I have not mentioned. 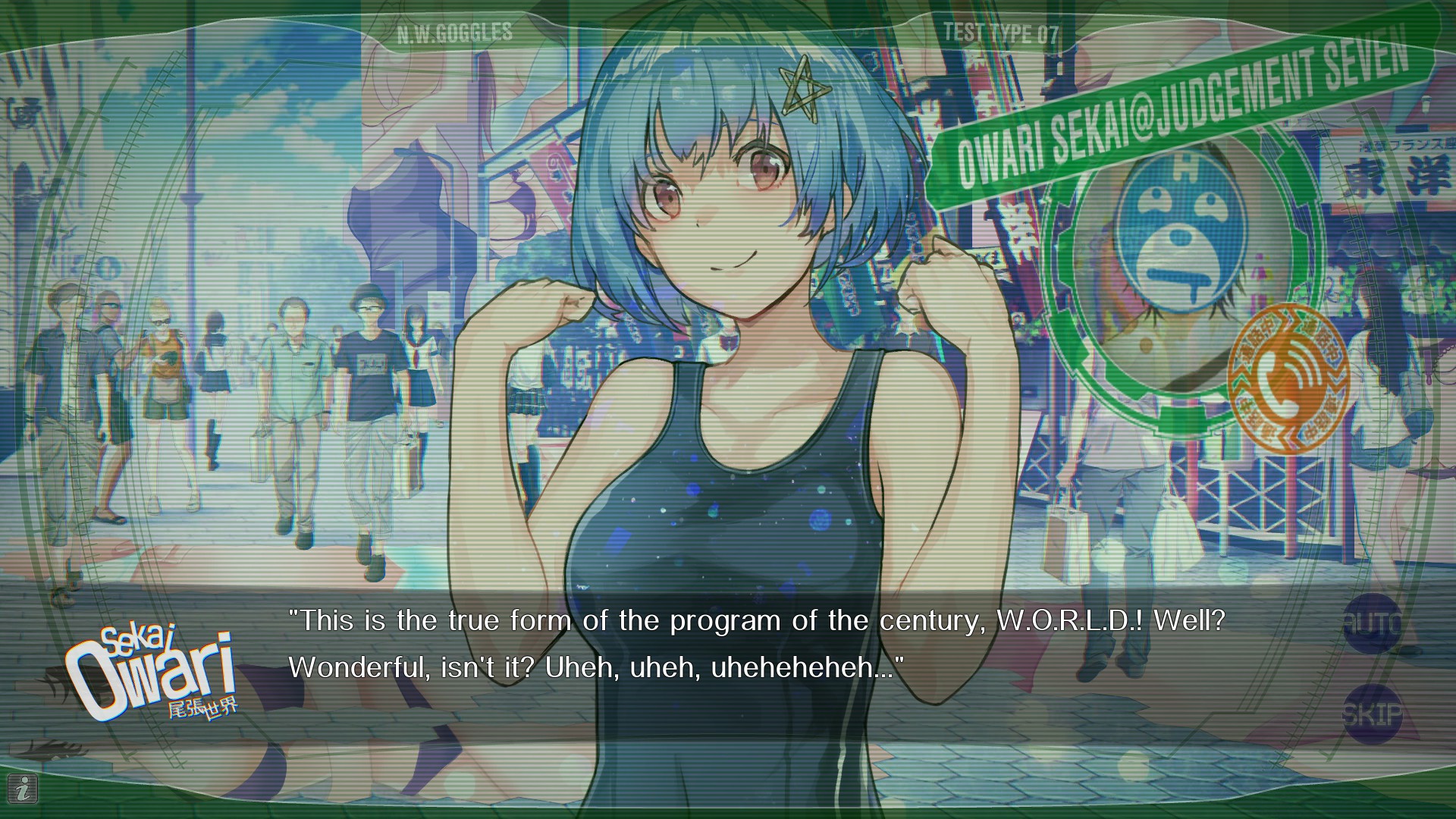 There are eight potential endings in the game. One for each other member of your game development company, a ‘plain’ ending, and a ‘secret’ ending. This isn’t really a spoiler, as it’s directly listed in a menu. The main bulk of the game is the common route, which took me approximately 18 hours to complete but seeing all the content took me approximately 30 hours with liberal use of the skip and skip to decision functions.

The character endings come with a shared chapter which ties the story up nicely, bringing back elements from throughout the game. They are then finished with a few short scenes focusing on the character. Not all of the endings are romance-themed. While the character endings did not add too much to the story itself, they were interesting to go through. I personally thought that Sekai’s was the best for pure comedy and Natsumi’s for wrapping up the story, but enjoyed them all. I do wish they were longer, but the game itself already does have a ton of content. 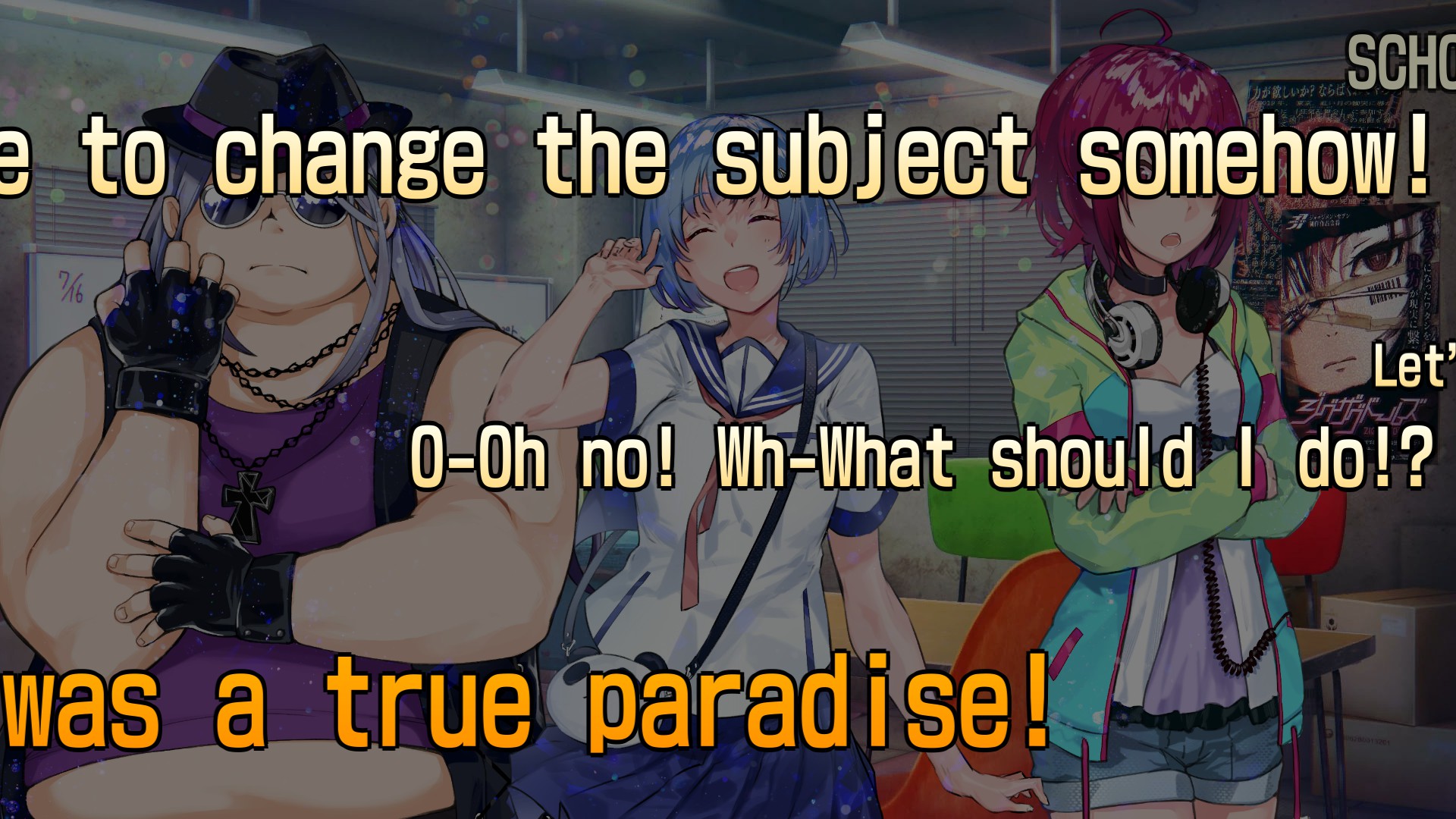 It is worth noting that the game has many choices throughout. Some of these are the standard where you pick from several options and some are the ‘Selection of Soul’ system. This occurs when you are in a panicked situation, you have to choose from several options floating across the screen before they disappear. These choices matter and you will only end up on a character ending with enough points for that character.

The character with the most points currently is shown in the menu, but even being in the top position does not guarantee to reach that ending. I personally had trouble with the Asano ending and secret ending, but most of the others were fairly obvious. In addition to the character ending, some other small segments of the story will only be shown if a particular character has the most points.

The writing itself is well done, but there are more than a few issues with typos. Sometimes these appeared once every few minutes or so, but sometimes they didn’t appear for a long time. In fairness, I am playing a pre-release version of the game and a patch is in the works for some issues. It never detracted from my enjoyment too much.

I personally found the artwork to be very well done throughout. It stands out amongst other visual novels. There is a lot of detail in the character sprites, the backgrounds, and the CGs. A lot of effort seems to have been put here, as there are sprites even for characters who only appear briefly, tons of different backgrounds and 40 CGs, not including the variants. In addition, there is some minimal animation, such as eyes blinking and characters mouths moving while talking.

The music is well done too with 27 tracks providing a good variety and fitting music throughout. All of the characters are voiced, including the main character and they are voiced incredibly well, bringing a lot of life to the characters.

The game includes the basic options for a visual novel and unusually it also contains options to reassign controls. This could be useful as by default ‘B’ is the confirm button on the Nintendo Switch in this game, where it is usually ‘A’. Personally, I thought this felt a little unnatural, but I got used to it soon enough. 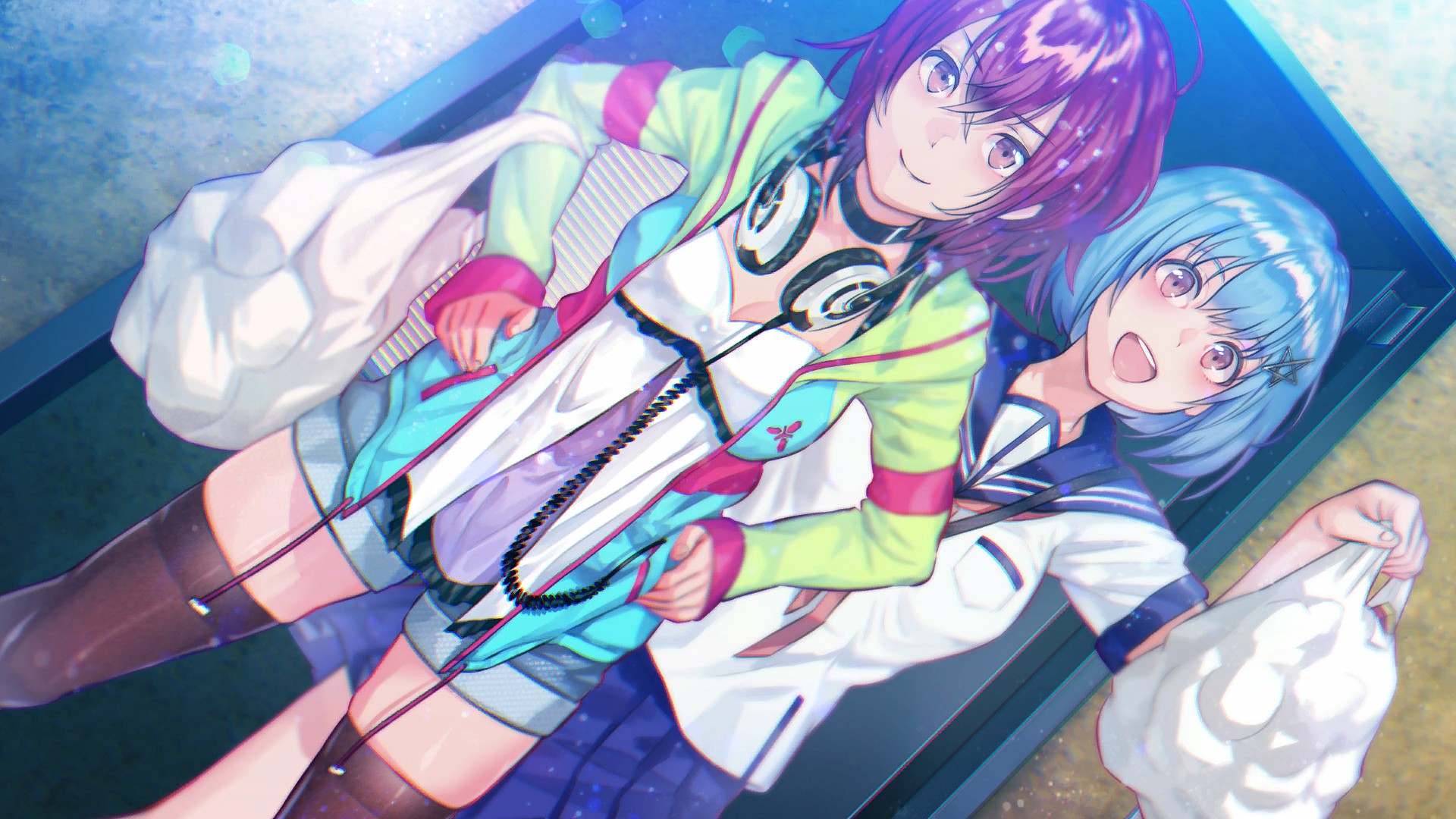 I really enjoyed the game overall. Beyond just finding the topic and medium interesting, the characters made the story very enjoyable, without losing focus on the plot. Iruka No.2, in particular, had me laughing during a lot of his lines.

I’d certainly recommend the game to any visual novel fans who enjoy comedy with a plot. While visual novels are a niche, people interested in virtual reality who enjoy anime might consider trying this out too, even if not usually a fan of visual novels.

This game can be purchased digitally for PC on Steam or Humble Bundle. It can be bought on console digitally via the relevant console stores or physically from online retailers such as Amazon (US) or Amazon (UK).

Many thanks go out to PQube who provided a review code for this title prior to the release date.

Update: This review has been updated to reflect new information on release platforms.

2 thoughts on “Our World Is Ended – Review”