Dead or School reminded me of my youth. Of my first foray into Anime. It was called High School of the Dead. Like it, there’re zombie-like creatures, and our Heroine kicks ass. All while wearing a school girl uniform too. 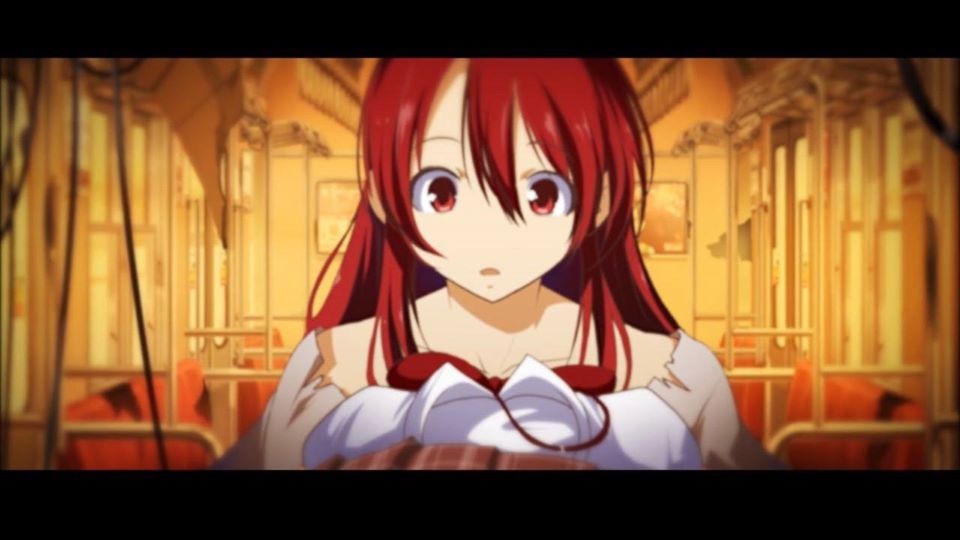 For three generations, humans have been forced underground by mutants. It seems there was an incident, causing mankind to seek residence in abandoned subways. As time passed, the luxuries of the present day faded into memory. Music is spoken about fondly. Mentions of the Blue Sky are treated as a legend.

One day, our heroine Hisako hears of the sky. It peaks her interest. She then hears of a place lost to the flow of time. A magical place known as school. Although her want to seek it out is resisted by her mother, her grandma encourages it. She passes down the school uniform she used to wear. Hisako slips it on and goes on her way.

What truths are hiding?

First impressions are important. Having a job interview, meeting a blind date, or speaking to a stranger. It gives you an idea what to expect. Dead or School begs to differ. 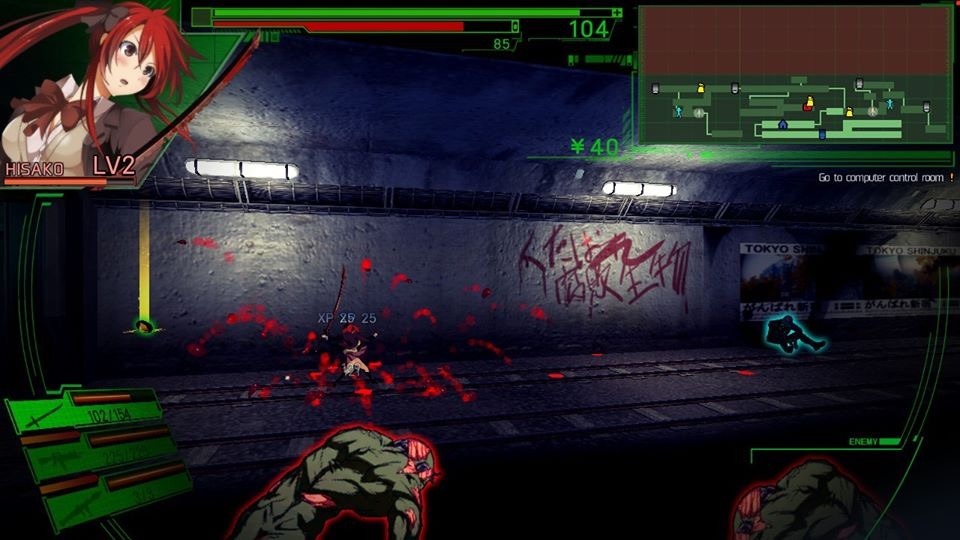 In the first couple of hours, the narrative felt pointless. It was a generic take of a post-apocalyptic world. We follow Hisako as she heads for the surface, in search of a school. That’s it. She wants to learn. At least it teaches kids the importance of education. Otherwise, It’s honestly pretty shallow. I never felt driven to push on. Dead or School was sluggishly dragging its feet until finally, it happened. There, on the surface, was a mysterious girl. I was finally able to sink my teeth into something. Who is she?

That unknown factor rustled my jimmies. What’s puzzling is afterwards, it was all uphill. The plot picked up. Like, where was this in the first few hours?

My second gripe is the localization. What happened?

As I read through dialogue, it appeared as if it hadn’t been written by a native speaker. Broken sentences, several missing words, and roundabout ways of explaining things. Hell, a few sentences looked google translated. For example;

“I found it in the further back of this shelter. Its never been used” or “I hope your weapon a bit more powerful now”. 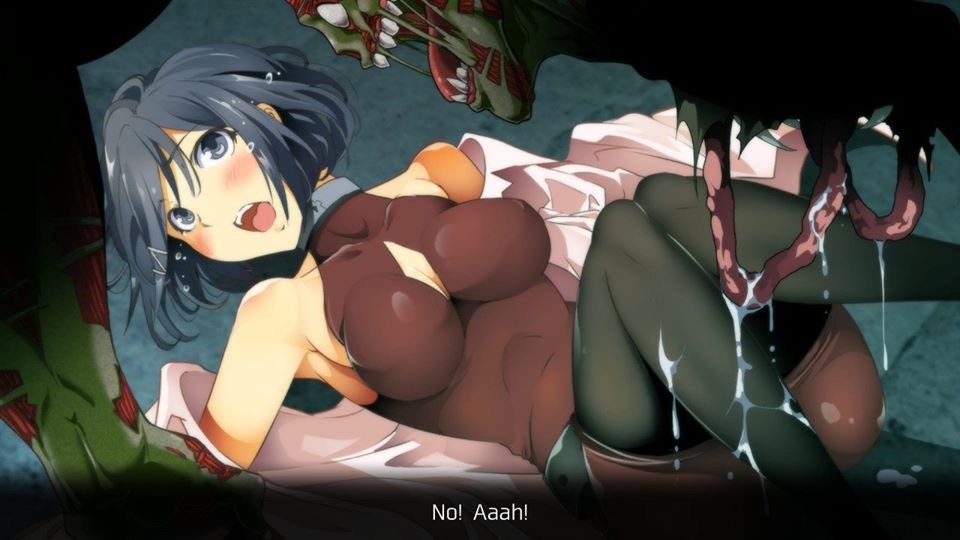 To me, readability goes hand-in-hand with immersion. Without it, there’s none. You want that milky flow. You don’t want the gamer to be constantly interrupted. With each jumbled mess I read, I had to do a double take.

Dead or School wouldn’t let me invest. It felt a bit self-sabotaging.

My final issue is how Dead or School takes itself very seriously, but comes off as silly. Hisako is presented as an airhead. At one point, you can accept a side quest from a man. Seems his friend was left behind as they both escaped mutants. You agree to help, entering the area. After murdering your way through, you notice something. Is that, is that him?

It is, but also isn’t. It’s revealed that this is his skeleton. He didn’t make it, but Hisako shouts anyway;

The intended sadness came across as comedic. Saying that to an already rotted corpse felt redundant. I appreciated the attempt at character development. Have our heroine suffer a failure. To have her screaming at the deceased?

Whose telling her that won’t work?

Dead or School will never shy away from throwing multiple enemies at you. This is something I appreciated. There could be as many as five or ten on screen without stutter. Not even a tiny chug. I’m thankful for this because it makes the game-play so much fun. It’s addicting. The battling is so fast-paced. If there were even a frame of lag, a volcano of rage would erupt.

The graphical prowess of Dead or School was disappointing. The environments are reminiscent of a handheld. For me, I was reminded of sitting on the couch with my PlayStation Portable. It’s not surprising when considering that this is a budget title. It packs several hours of fun but cuts corners to get a cheaper retail.

The character art, on the other hand, is really well drawn. I’m personally a fan of the aesthetic. Then again, I’m also a anime enthusiast. 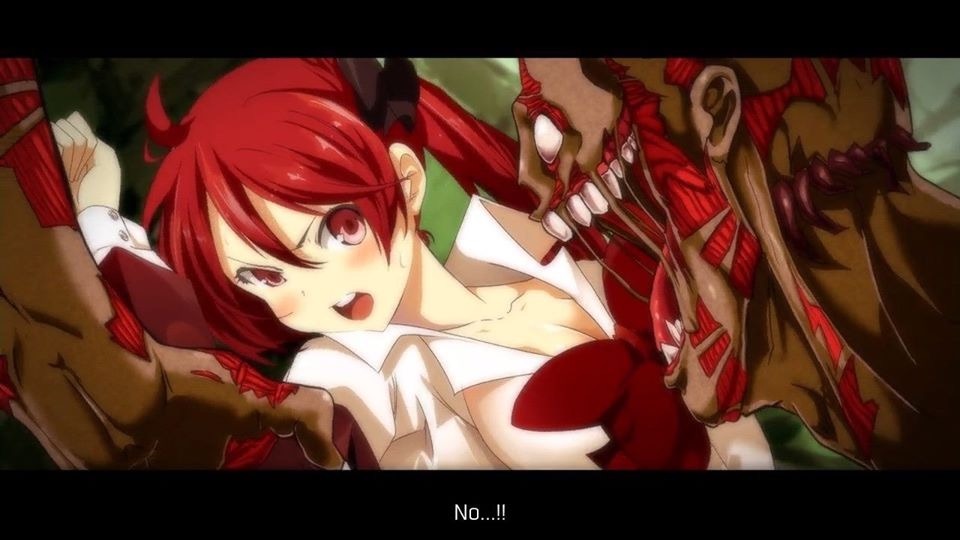 Every character has a unique distinction. However, the odd camera angle doesn’t allow you the chance to appreciate it. It’s really zoomed out, and will sporadically zoom in. This’ll usually only happen when neck deep in mutant combat. I also found the contrast of high res drawings in a low res world kind of jarring.

Truly the only reason I wadded through the first few hours. Something about the simplistic nature of slashing up mutants was just so enjoyable.

First, I feel it important to mention that before Dead or School kicks off, you’ll be posed a question. If you’d prefer aiming be tied to the left or right stick. I chose the former as I’m left-handed. Big mistake.

I had assumed doing so would move my movement to the D-Pad, separating the prompts. What occurred was both was tied to the stick. Trying to aim my gun was a nightmare. To do so, I had to move too. It made it nigh impossible to shoot on tiny platforms.

Also, I was never able to aim to my bottom right. It was very finicky. While there’s an option to change controls, doing so will solve nothing. Aiming and movement are forever a pair. Pick the right stick! 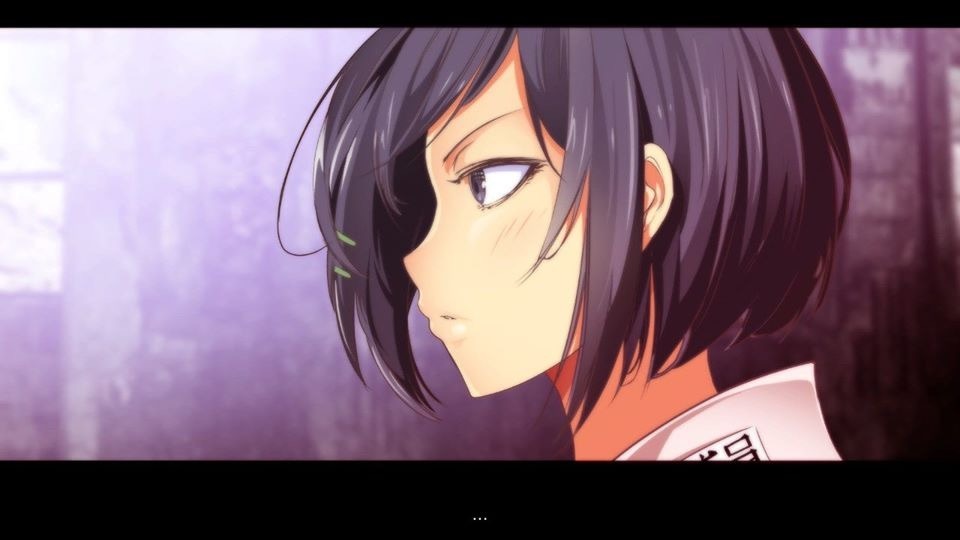 If you dislike the durability system, well, Dead or School utilizes it. It’s infuriating early on. Repairs can only be done at save points. These are normally quite a fair distance apart. In between, you’ll face off with several differing mutants. I’d always have a broken weapon. Once it breaks, the damage output suffers. I’d imagine this is mitigated by the usage of guns. However, since shooting meant moving, I’d parade to my death.

You do find modifications that’ll give you perks; like higher durability. Breakage becomes rarer. These can also grant you special abilities. For instance, whenever an enemy is killed, they explode.

Because of the RPG elements, there’s a skill tree. Each branch focuses on a weapon type. Melee, gun, and a heavy. In my play through, because guns were not viable, I focused on melee. Since I find the gameplay genuinely fun, I fully plan on exploring the other options. With each “ding”, you’re given a point. Use it to learn moves, or gain stat boosts. 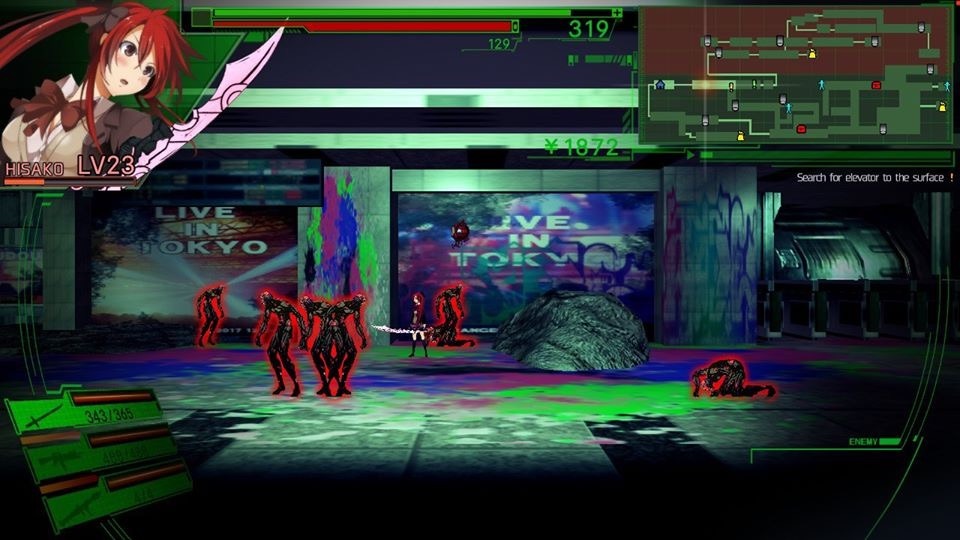 As a final note, you can reinforce weapons to increase level. You can also modify them to have abilities of their own, like a sword that’ll strike three times, but lowers your attack.

The tracks were a mixed bag. While none were outwardly horrible, a few were generic. They felt out of place. I did really love the heavy metal when in a battle. It did well to hype me up. Shout out to the excellent sound effects too. When I’d attack, it felt impactful.

Dead or School is a fun romp for those seeking tight game play. However, don’t expect to be immersed. It’s marred by horrible localization, preventing any investment. The mystery that appears is decent though. Worth keeping in mind that Dead or School will start slow.

With RPG elements and a ever present skill tree, you’re able to customize Hisako. The inclusion of modifications further enhances the freedom to mould her. Some of these also provide fun bonuses. Like exploding enemies. So, it’s a good thing that performance was flawless.

The repetitive hack-and-slash could get tiring. That’s why I believe this is perfect for short bursts. The sound effects are well-done, and it made each strike feel satisfying.

Unfortunately, it doesn’t do enough for me to comfortably recommend purchasing it at full price. Maybe take a look at some of the other anime games we’ve reviewed in the meantime, as we say;

DEAD OR SCHOOL – WAIT FOR SALE.

Many thanks to Marvellous Games for the review copy.

Conception Plus: The Maiden of the Twelve Stars – Review