WORLD OF HORROR, created by Panstasz and published by Ysbryd Games (from VA-11 HALL-A) is an indie, horror focused, rogue-like RPG that offers gameplay as unique as its visual style. The game receives regular updates and bug fixes, which means a few of the negative points explored in this review might become invalid in the future.

WORLD OF HORROR clearly tries to convey an aesthetic seen in ancient technology, mimicking old computer startups, crunchy sound effects and 1-pixel styled graphics (made entirely in MS Paint). It was all made for the player to feel as if they were playing on a machine straight from the 80’s, and it nails that perfectly. The unusual pixel art style allows the developers to create the most gruesome, scary and disgusting sprites they can, really living up to the “HORROR” in, well, “WORLD OF HORROR”. Looking at these visuals, I cannot help but notice inspiration from Junji Ito’s work (well-known for his body-horror comics such as Uzumaki and Gyo). The art is certainly what makes each enemy unique. It may vary from a person with three faces stitched together to someone who had their head cut in half, or even with no face at all, just a giant mouth and massive sets of shark teeth (it has to be a pain to maintain oral hygiene).

That, however, is as far as enemy variety goes. All that seems to change between each encounter is the damage, description, and the name of the attacks. Foes don’t seem to have specific conditions or perks, outside of some very minor characteristics. I don’t find that bad at all, though. I like my combat system complexity like I like my lovers: non-existent. The developer Panstasz knows exactly how to keep the game interesting without shoving hundreds of mechanics down your throat, allowing the randomness of the playthrough itself and the competence of the player to dictate the experience.

Every run is randomly generated, which means that every playthrough is completely unique and anything could be expected from each encounter. On top of that, there is a mechanic for ancient gods and backstories that set up basic, unchangeable conditions to your run, such as making it impossible for you to flee from combat. This combination of randomness, gameplay, and mechanics relate very well with each other, creating a satisfying, yet challenging experience. This gives the players enough tools to overcome difficulties, but only if they use them right.

Your character has three different values tied to their status: stamina, reason and doom, and if your doom counter reaches 100%, your run is put to an end in one of many different gruesome ways depending on the ancient god and rules predetermined. These values affect your choices strongly, as every randomly generated event can lower or raise those numbers. Will you open a package you found by your door knowing its contents could traumatize you, lowering your reason? Exploring the forest, you could find either funds and items, or a dead body. Every choice you take gambles with possibly game-changing factors, and that only adds to the suspense of the game, as you’re always forced and encouraged to explore different areas. 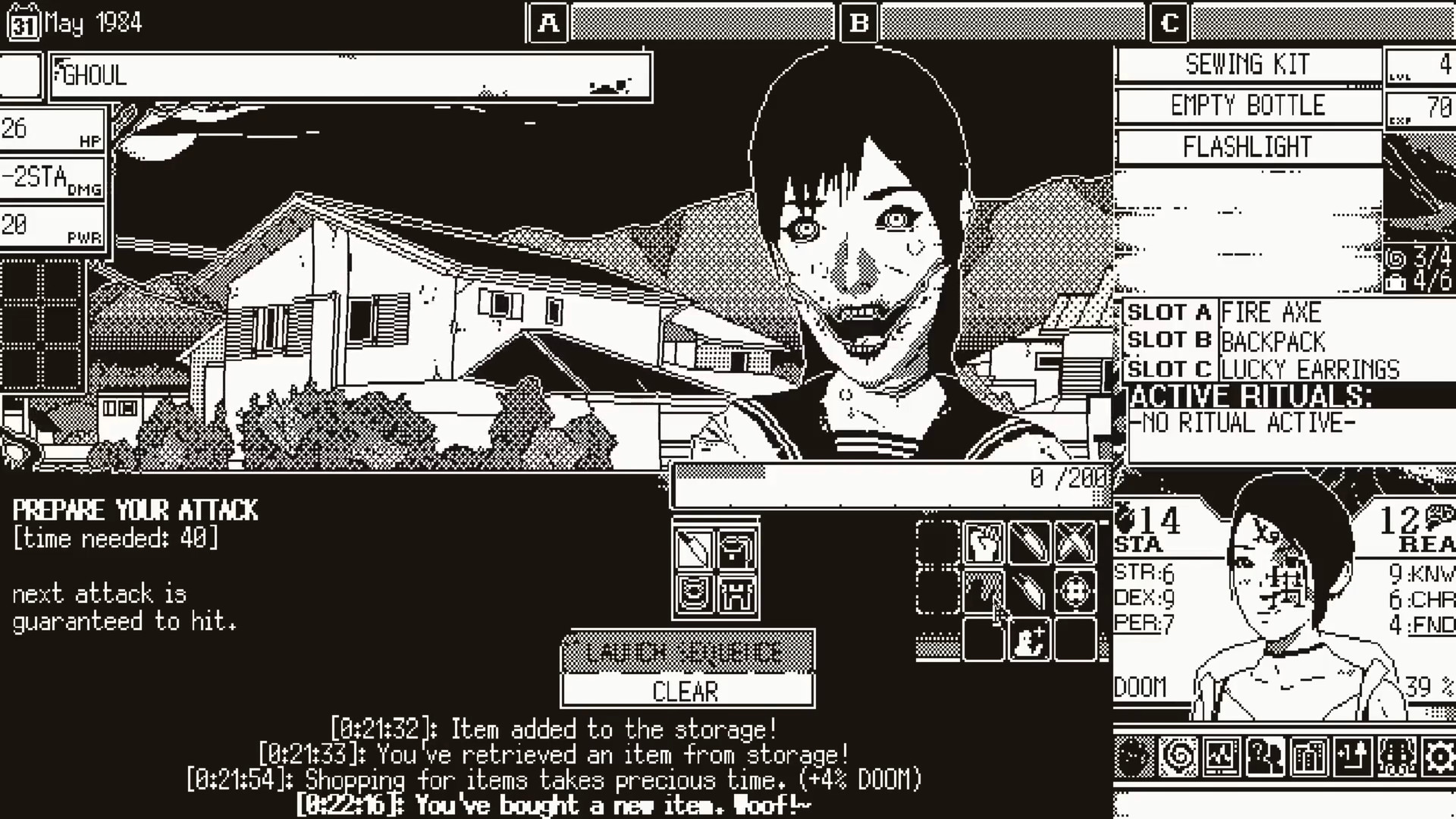 There are a nice variety of areas, some of which you can only explore, and others that offer more services. Each location offers different consequences and events for exploring them, but you’re not required to do so in order to progress. Only the ones that are marked in the interface are required. Once you finish investigating the required areas, you are met with a final destination, unique in each case with a different ending depending on your actions.

After concluding your adventure, you can go back home, which serves as a checkpoint, or a “calm before the storm”. This is a place to relax, where you can recover some health points by taking a bath, changing your outfit (even though that doesn’t seem to affect anything, not in even visually) and save your game. A minor inconvenience is that you can’t save and keep playing, you always have to exit your run before continuing. It doesn’t seem to have a purpose. After chilling in your apartment for a bit, you can choose your next case from the selection screen, and start a new mission, with a new story.

When you finally finish all of the missions, you will have access to a tower that was locked at the beginning of the game. There, you will have to explore each floor until you reach the top, where you have a battle and well – I’ll not spoil things for you. I will say that there are different endings based on your actions, so you may want to complete it more than once, as I have. 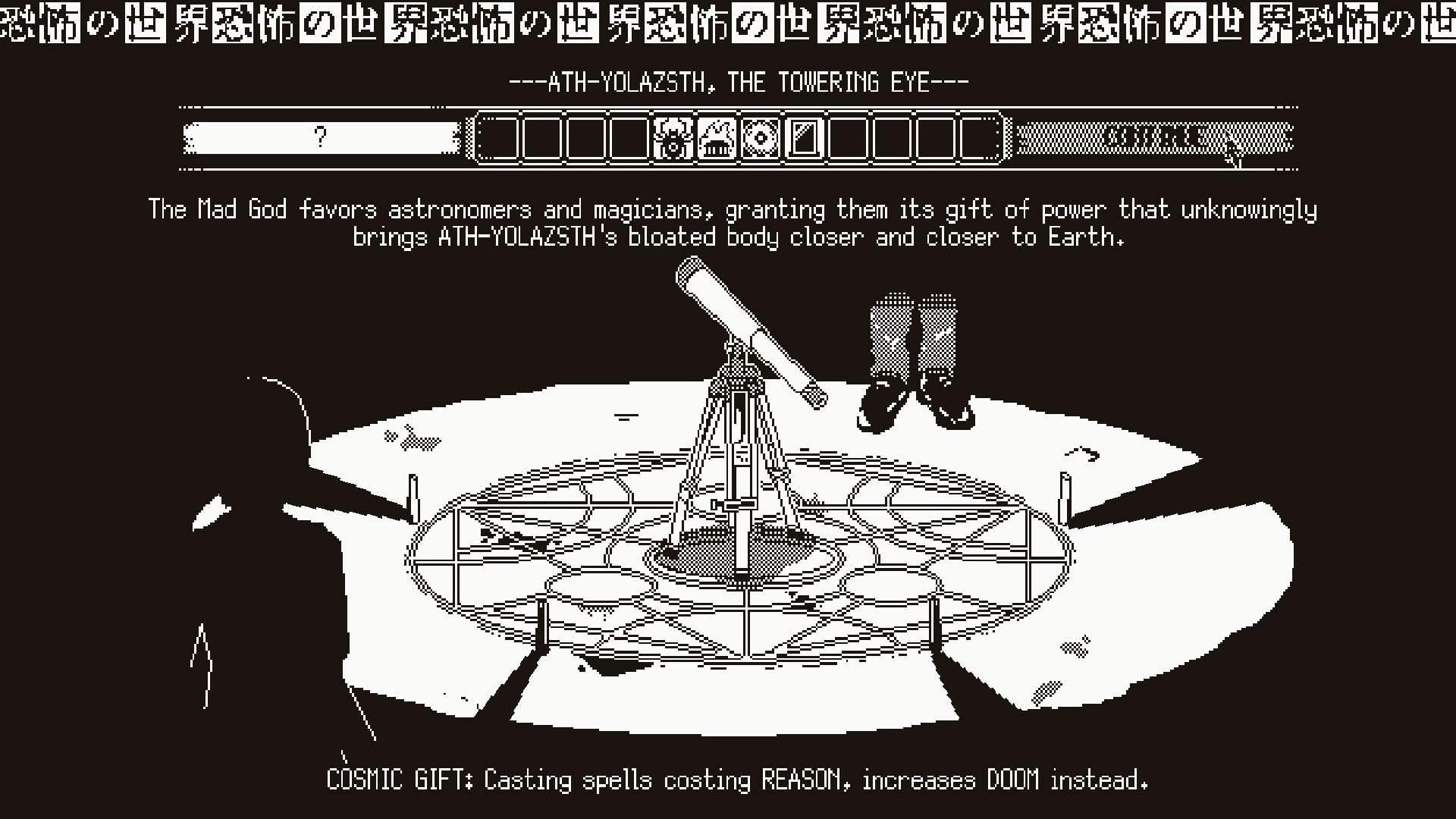 Curiously, WORLD OF HORROR’S sense of HORROR relies not upon psychological HORROR, but more of an in-body HORROR and shock HORROR. The sense of suspense in the game is not related to horror. Instead, WORLD OF HORROR focuses on smart ways of delivering shock. It presents the HORROR by not only showing highly detailed images of disgusting botched faces and Eldritch beings, communicating mostly an idea of a world in doom rather than helplessness of the characters themselves, but also fooling you in creative ways, such as hiding a deformed face behind a door you’re forced to open slowly, and then obviously close as fast you can.

The music certainly doesn’t help setting up a creepy atmosphere at all, as it just fails to communicate the gruesome HORROR in WORLD OF HORROR (alright, I’ll stop now), with its high pitched notes and unintentionally upbeat rhythms. That doesn’t make the soundtrack all that bad, though. The songs have nothing wrong with them and they’re not, in any way, annoying to listen to. It’s no HORROR (I promised I’d stop). 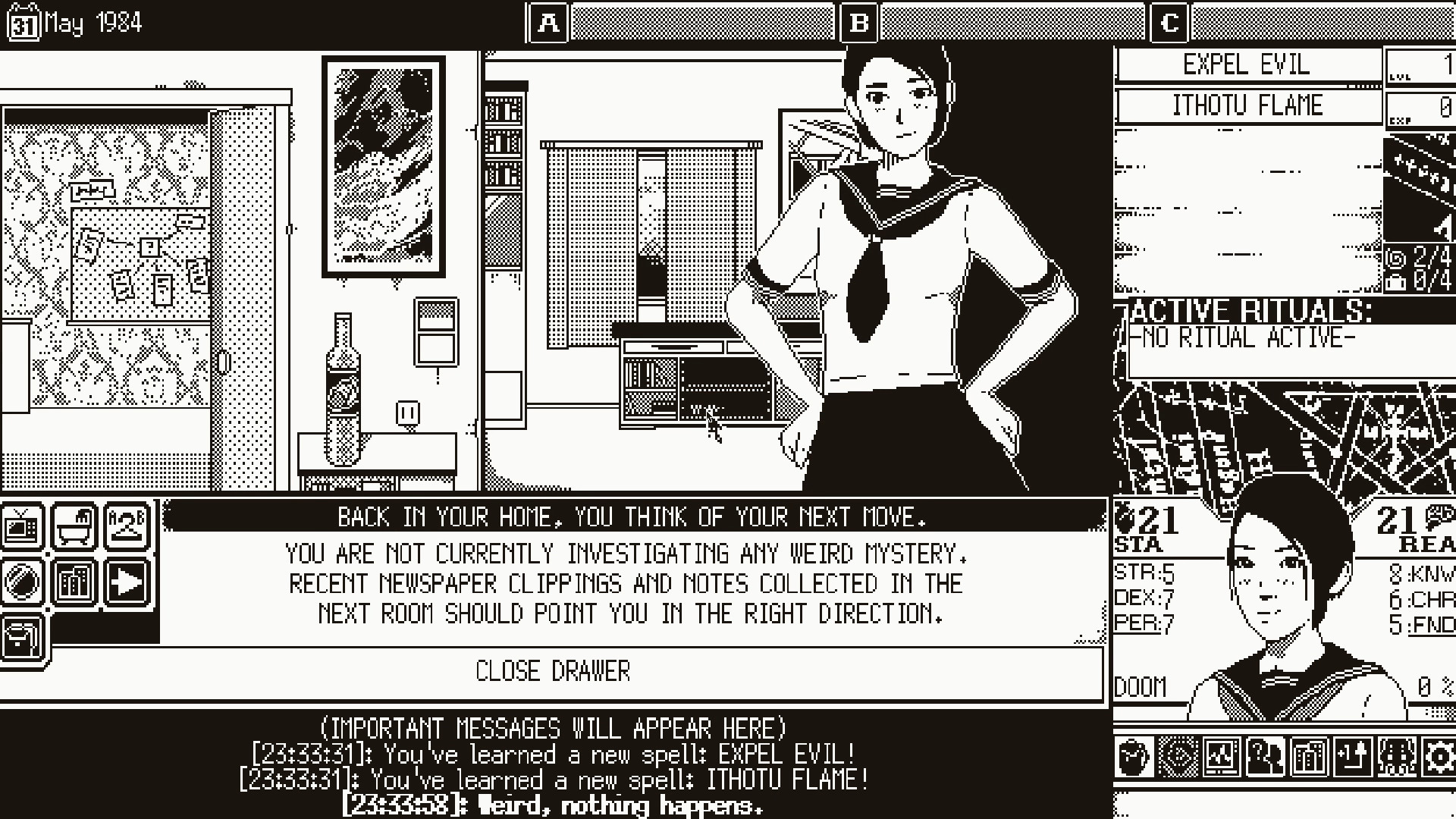 Even though you’re constantly being confronted by awful, nightmarish creatures that look like they had their head run over by a tank more often than not (you don’t want to know what that looks like, trust me), the combat system makes you feel much more powerful than any human could be in that situation. It’s strange how, with just a sequence of punches and kicks, you can kill what looks like it came straight out of a horror movie. The characters in most horror movies wish they knew those combat skills! That said, it’s important to note that it’s a very well crafted and original system: powers take a determined amount of space in your sequence bar, so you have to plan carefully what to do given your situation. You can just stack a bunch of kicks on top of each other and pray they’ll hit, but that’ll either kill you or leave you hanging by a thread. The combat system offers four different types of actions, but I only found myself using defensive and offensive actions, and only very rarely spells. Most encounters end up just requiring me to stick with the same sequence of dodges and attacks, which, honestly, gets a bit boring after a while, though it’s still interesting to see what disgusting ways the enemy will use to fight you.

This expectation and curiosity to know what is coming next is what makes WORLD OF HORROR so engaging. You’re eager to find out the end of each story, to know what could be the consequences of doing certain actions, because truly, you don’t really know what to expect from this game, much like every page of Junji Ito’s work, every event in WORLD OF HORROR is a surprise that makes you want to find out more. This can either ruin your run or improve it greatly. As they say: “Curiosity killed the cat but satisfaction brought it back”. 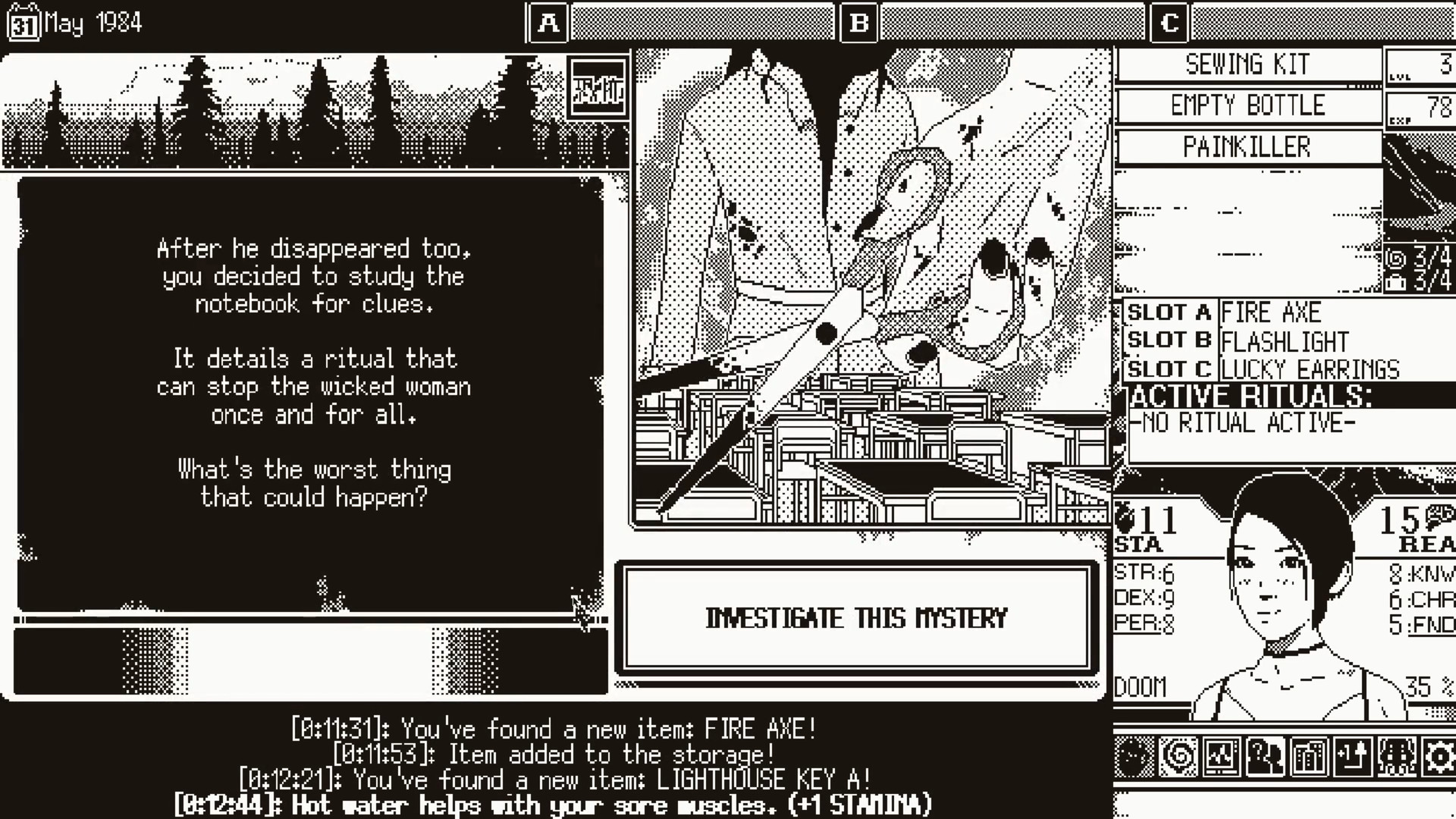 In conclusion, WORLD OF HORROR is a satisfying and challenging experience, worth your time and money. It provides innovative mechanics, unique visuals and an engaging story. It has tons of replayability and requires multiple runs to fully experience its greatness. It’s not a game for those with a weak stomach, but it certainly has eye candy for fans of body horror.

WORLD OF HORROR can be bought on Humble Bundle or Steam for PC.

Many thanks to panstasz for the review code.

Shadow Uprising is a stealth game, only playable with a virtual reality headset. It’s officially compatible with the HTC Vive and Oculus Rift but may also work on other PC VR headsets such as Windows Mixed Reality and the Pimax. The game is fairly light on story, being more about gameplay. It does, however, have […]