This review is looking at Rinne Utopia but will mention features of the package as a whole. Rinne Utopia was originally released in Japanese only for the PlayStation 3 as a standalone game in 2013.

The collection of visual novels by Idea Factory is available on Steam (PC) and Playstation 4. It is worth noting that some CGs have been censored in the PlayStation 4 version and that this review is based on the PC version.

Regarding sexual content, there are references to sex acts both explicit and implied. That said, There is no outright adult content, despite some partial nudity. The extent is this are a few nude scenes with carefully placed objects or a phallic-shaped popsicle in a very young-looking ‘18 or over’ year old girls mouth.

Rinne Utopia has a rather lighthearted story for the most part. It follows the basic premise of the Date A Live series, which is that spirits which exist in another dimension appear in the world on occasion. When this happens, a large scale disaster called a spacequake happens. The spirits have various powers and take the form of girls.

The spirits powers can be sealed by the protagonist by kissing them. That said, when spirits become distressed, their powers can come back and go out of control. In Rinne Utopia, much of the time is spent on dates with the spirits to keep them happy and stable.

While the game does give a brief recap and sprinkles some of the character histories throughout, I would highly recommend watching the first season of the Date A Live anime before playing this. The characters and background are not sufficiently introduced in the visual novel alone. Someone new to the series should be able to follow it but will miss out. 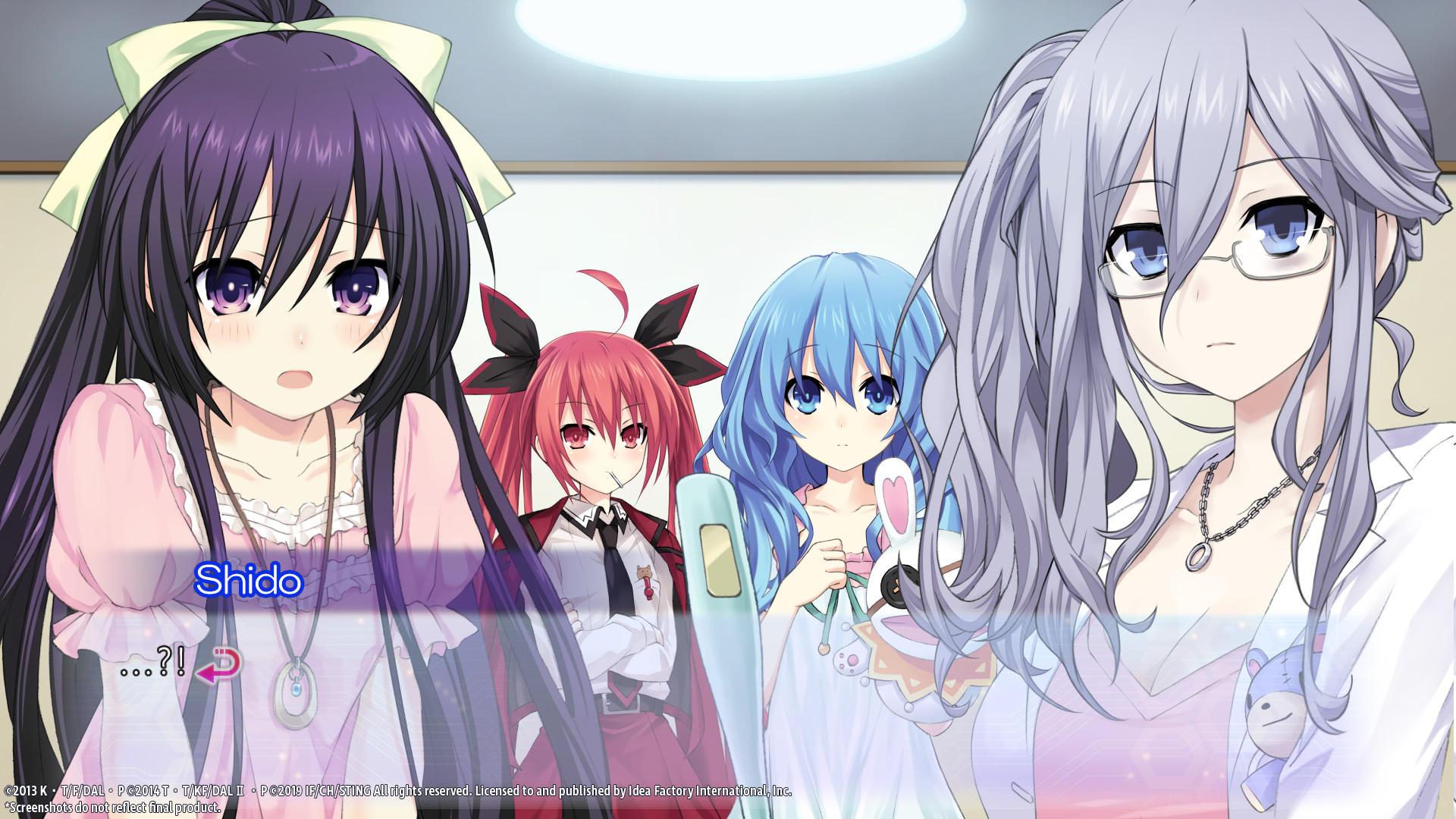 In this story, a mysterious barrier has suddenly surrounded the city and the spirits briefly went berserk. Shido has lost his recovery powers and is taken ill at the beginning of the story. He finds that his recollection of things has been affected. There is a tower that only he does not remember. A childhood friend who he doesn’t remember initially. On top of this, he finds some unusual things going on around the city.

Most days have Shido go to school, then spend some time with the girls in events. The way this works is that you can choose where to go on a map up to six times a day. Usually, this is two side characters with a short scene each, then a main character with a longer scene, then repeat.

Outside of the events, most of the story is the same no matter which girl’s route is chosen. There is some variation regarding which parts of the story happen or who Shido is with at the time of a particular part of the story being based on who he spent time with that day, but overall it’s the same. Each girl does have a unique ending, but it is fairly short. 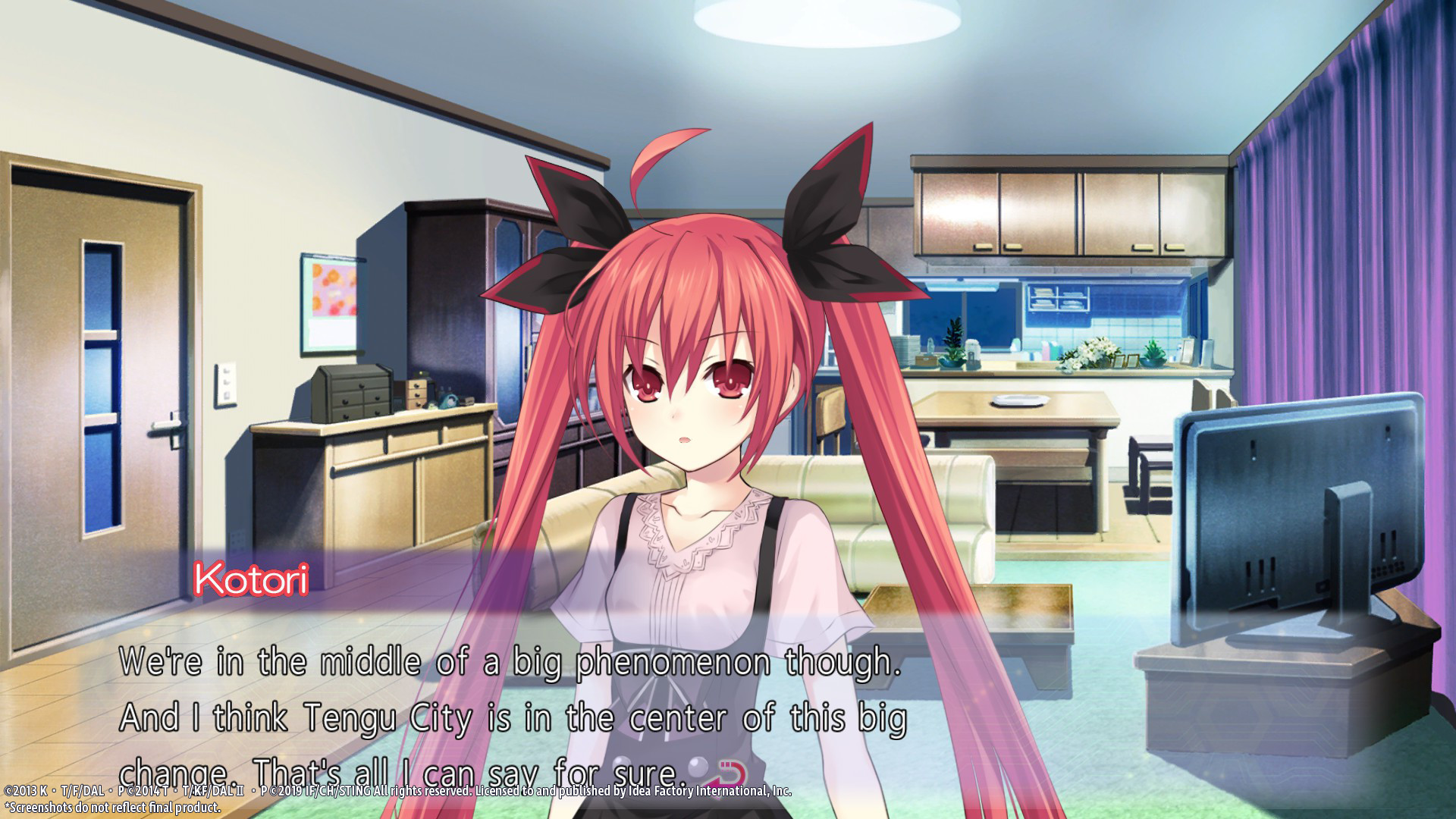 I found the story itself fairly bland. I still enjoyed it, but it was more because I like the characters and the Date A Live series, rather than for the story. I feel like this is very much for fans of the series, between the character focus and minimal explanation of the story and characters. It just seems like some extra content placed between seasons one and two of the anime series. There is a good amount of fanservice and some comedy, but nothing too serious.

The exception to this was the true ending. I did find that route much more interesting. That said, it was a huge pain to unlock it. It did very nicely tie together the other routes and finish the game, but I imagine that many people will skip it, just due to not being able to find out how to unlock it.

Regarding endings, I should note that the game has quite a few bad endings. During the events, you can get choices which may lead to these. Most of these are fairly obviously the wrong choice, but some have absolutely no warning and seem completely innocent. Even many of the obviously wrong choices felt like a bad end was too much for such a small mistake. I recommend saving at choices unless you want to restart completely for little reason.

It took me three hours to go from the start to my first ending. This isn’t a very long visual novel, but going down different routes will show a lot of new content just due to the character events. 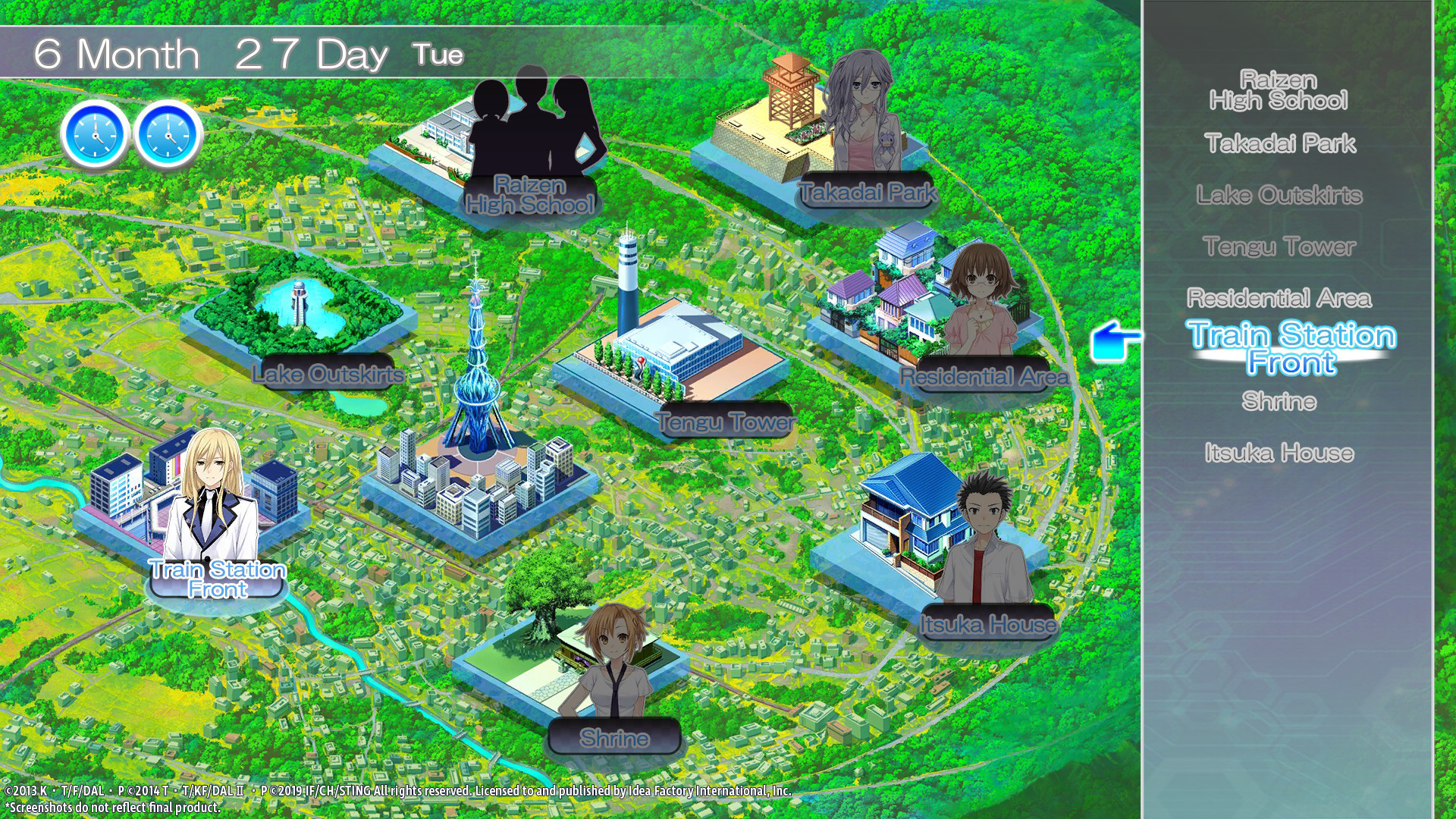 As mentioned, this takes place after the first season of the anime. Fans of the series will be familiar with most of the girls. There is Tohka who is cheerful and innocent. Yoshino appears as a young girl who is gentle and shy. Kotori is usually cynical and strong but has multiple personalities. Kurumi is shown to be violent and twisted but possesses a strange sense of justice. There is also Origami who is not a spirit like the others but is obsessively dedicated to Shido.

New to the series is Rinne Sonogami, the childhood friend and next-door neighbor mentioned previously. She acts as a perfect childhood friend character. She wakes Shido up in the morning, cooks food for him and the others, doesn’t act jealous and is considerate towards everyone.

There are also several side characters too. These are most often used as comedy relief. 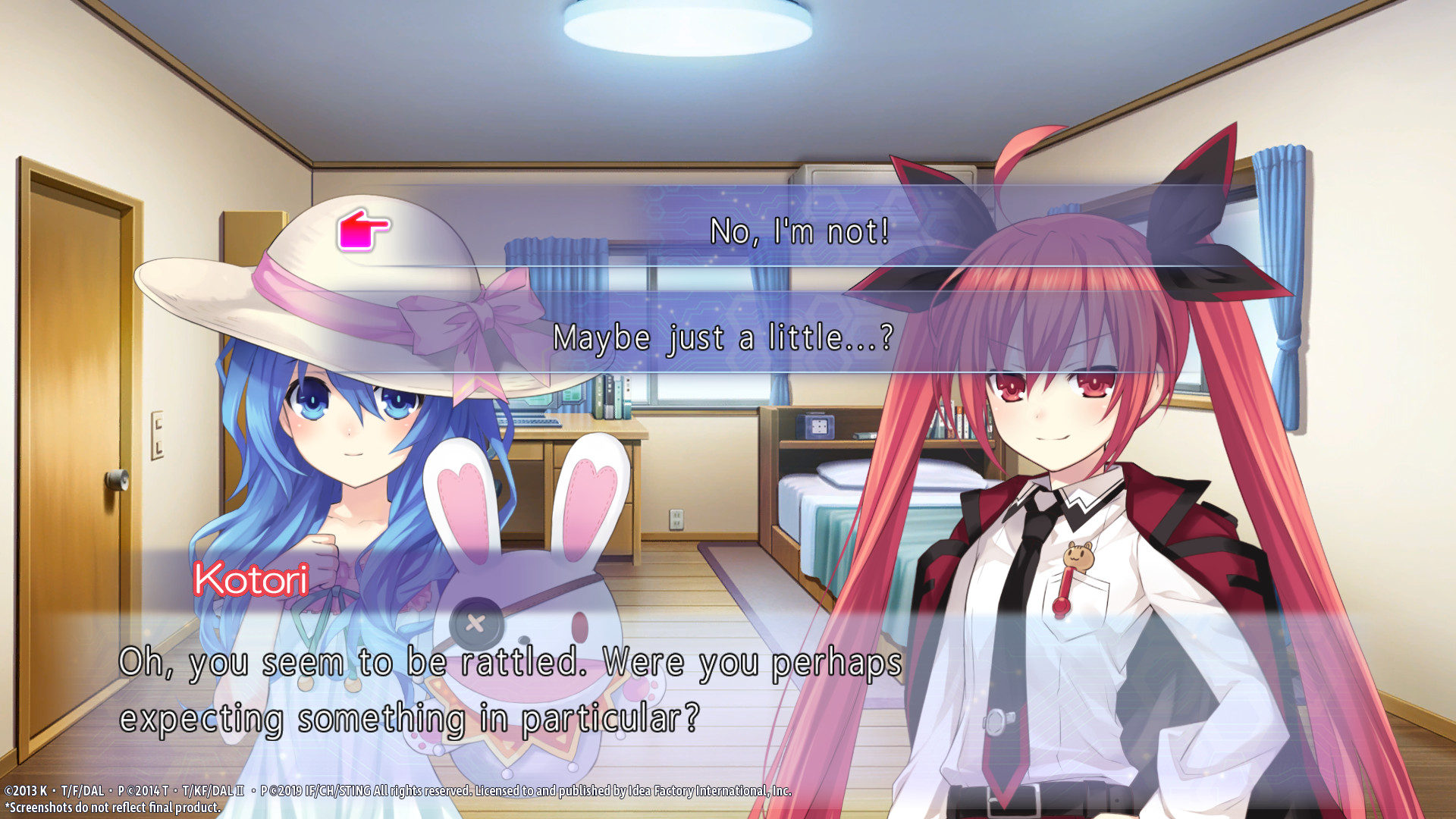 The game comes with some nice extra features. It has the standard CG library but also has one for movies and memories so scenes can be replayed. Steam achievements are included. There is a bonus section which includes a special book with drawings. Most impressive is a bonus CD with 17 drama CD tracks, but this is ruined by the lack of English translation.

The quality of the editing is high overall. There were a couple of odd sentences with grammar issues, such as one where someone was speaking to someone, but referred to them in the third person or another where the past tense was used instead of the present. Generally, the quality was high, but these issues did pop up occasionally.

Other technical issues I came across were a skipped scene in Kotori’s route, which would have made things very confusing if I hadn’t already seen it in another route. The game crashed once for me in the drama CD section, but never in the visual novel section.

The visuals are very well done. The quality of sprites and backgrounds are very high. There are a lot of CGs included in the game. Sprites and some CGs are partially animated with movement and lip sync is used quite accurately. 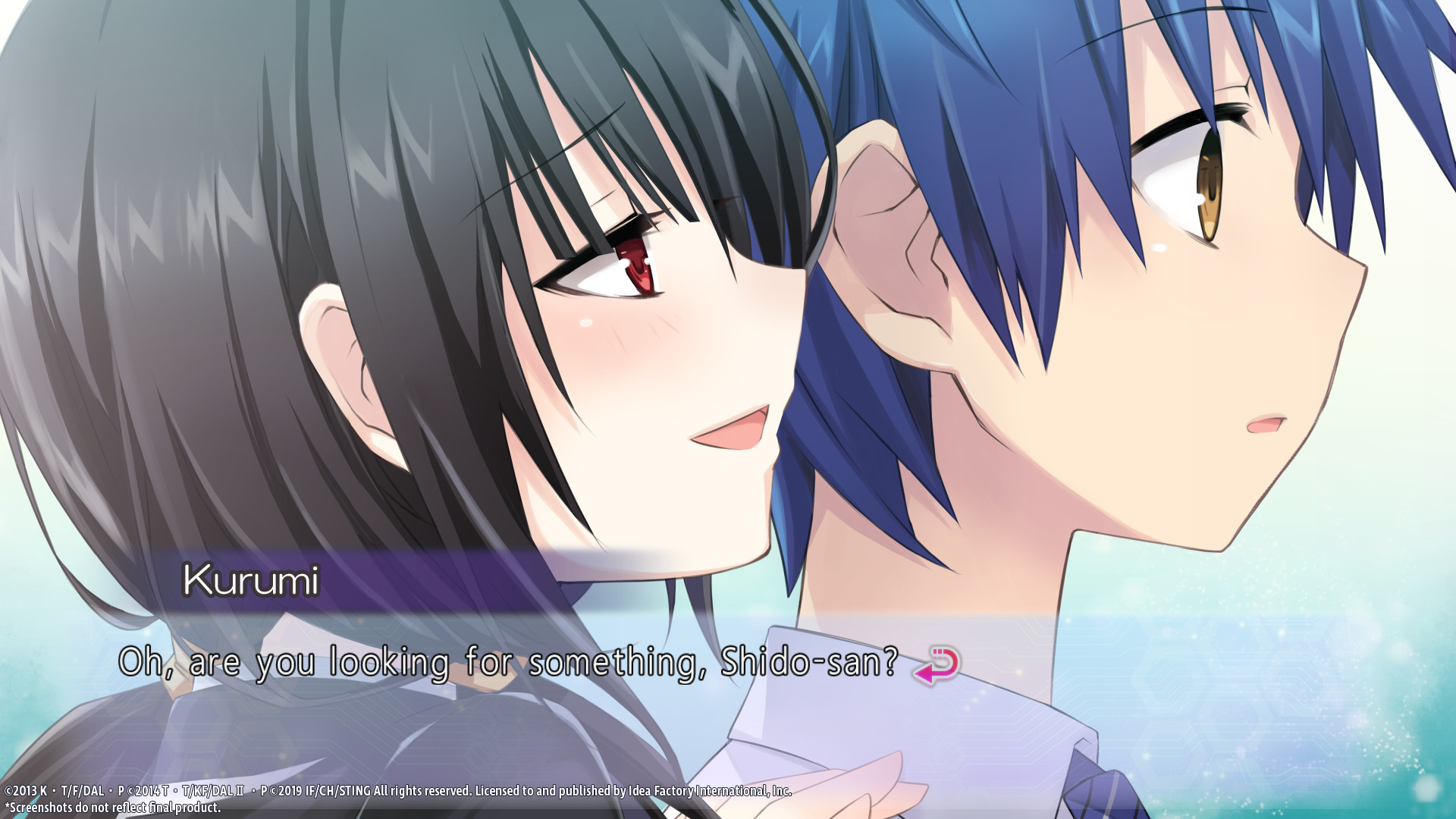 All characters aside from Shido are voiced. This even includes background characters. The voice acting has been done to a high standard.

The options are fairly basic visual novel options. One thing of note is that ‘K’ is used as the default key to proceed to the next sentence. Keys can be remapped if needed, but it is unusual. A standard USB controller can be used to play too. There are no prompts on screen for skip/auto features, so these need to be activated by a key.

I did enjoy Rinne Utopia, but I wish they had taken the chance to explore a more interesting story, rather than just see more of the characters. It felt like the filler episode of an anime – interesting and fun, but it didn’t advance anything.

The true ending was certainly interesting, but I didn’t like how the unlock conditions were handled. Something simpler like getting all of the girl’s good endings would have made life much easier. There was actually an in-game hint, but I found it just confused things more. 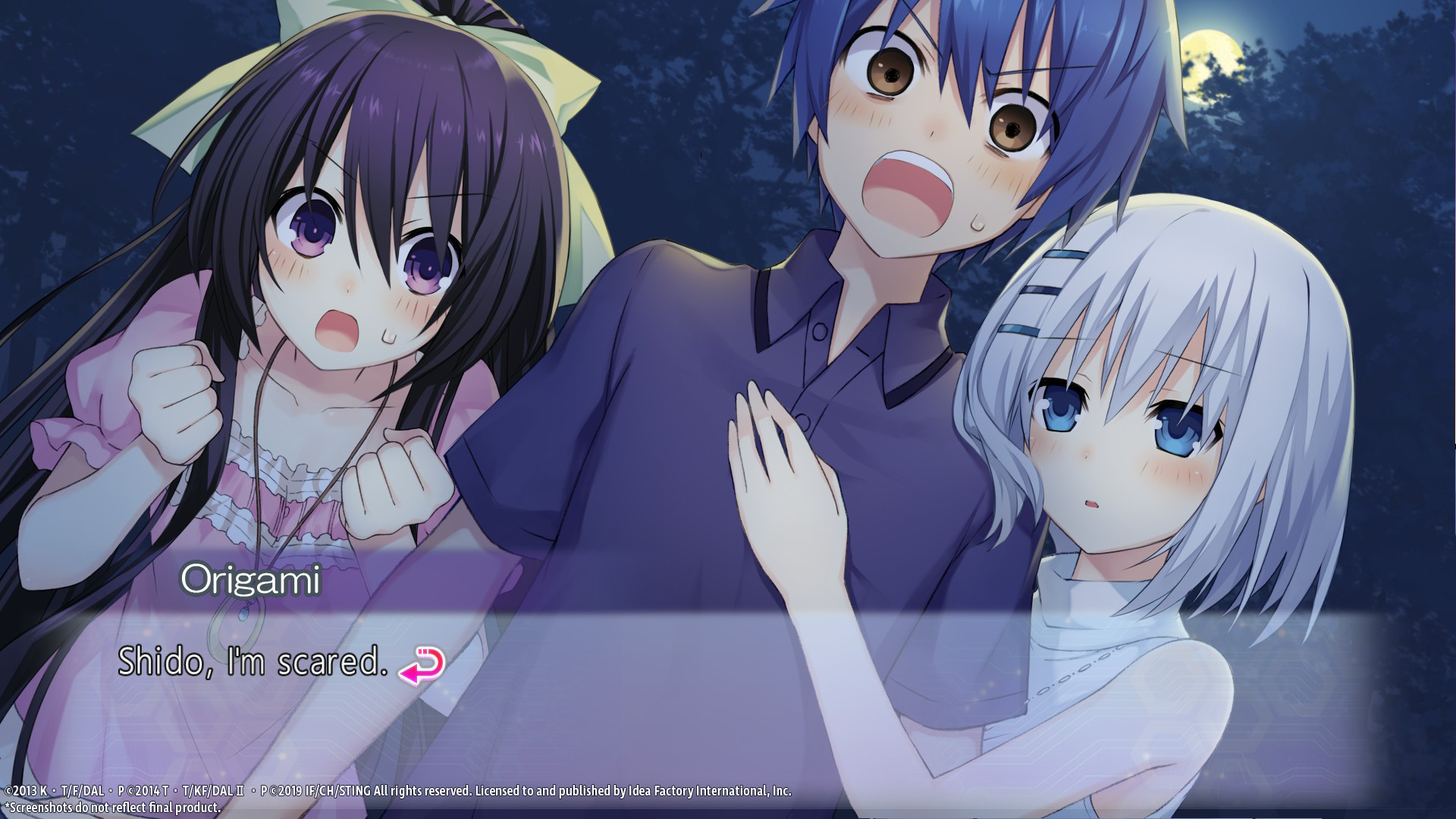 I’d certainly recommend the game to any Date-A-Live fans. I just think that much of the enjoyment will be missing for visual novel fans who have not seen the anime (or other media) first.

Thank you to Idea Factory for providing a review code for the game.