Exogenesis ~Perils of Rebirth~ is a hybrid of a traditional point-and-click adventure game and a visual novel set in a post-apocalyptic world.

Unlike the articles normally posted, this is not a full review after going through the game multiple times as per usual. This is just taking a brief glance at the game. This was done as the game is currently in Early Access. Issues mentioned in this write-up should be taken with that context in mind, as they may be changed in the final version.

This game by Kwan (formerly Agos Studio) is available on Steam (PC) and Itch.io (PC). It is a community-funded game via Kickstarter and published by Sekai Project. 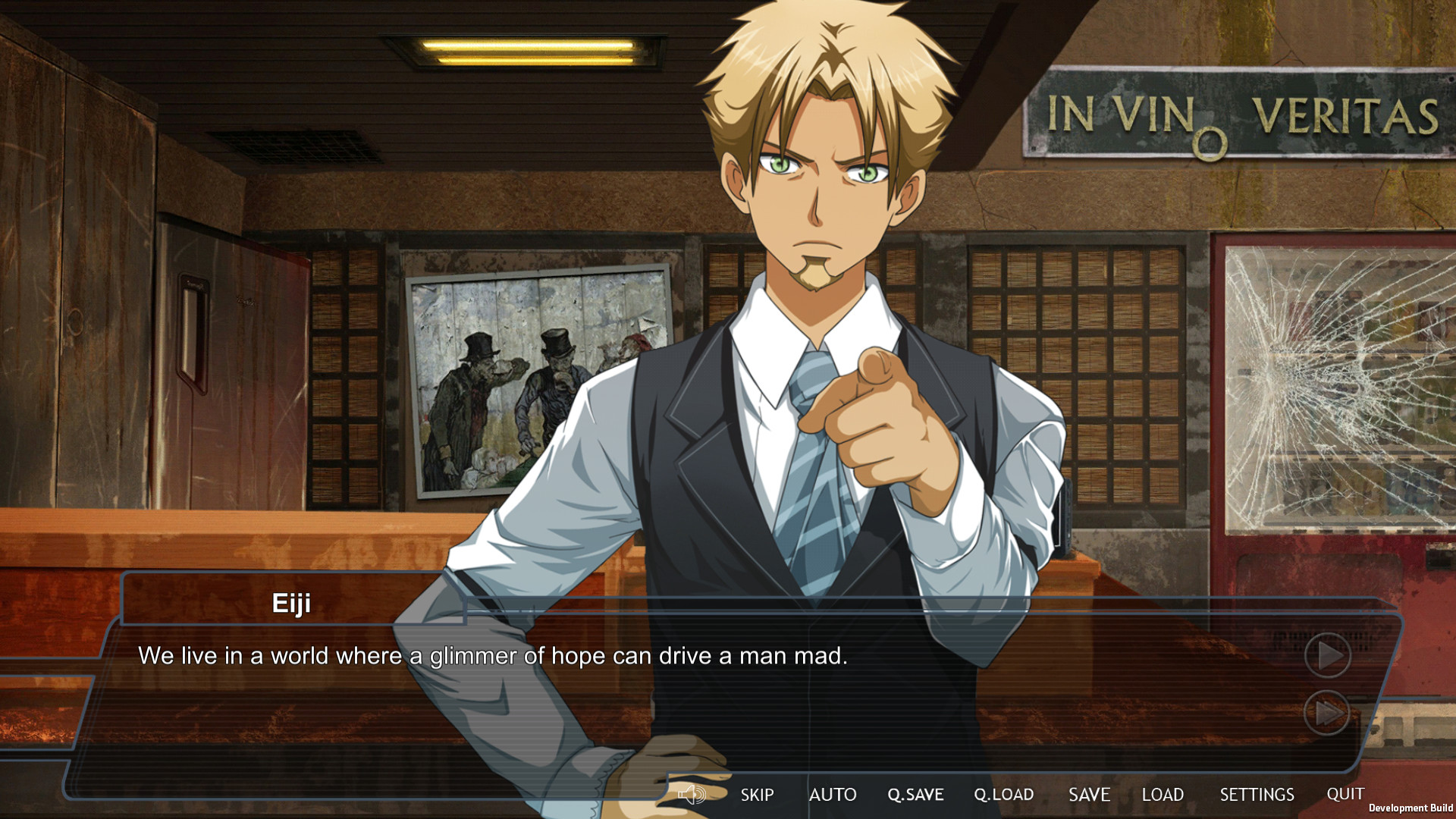 The setting is the year 2071 in a post-apocalyptic world where people often have to scavenge to live. Approximately six decades ago, the world was devastated by a nuclear war. Since then people are struggling to survive. The lucky will have a membership with Sanctus – a religious order with fanatical followers, who reward some with chips that allow entry to their camps and rations. Those unable or unwilling to receive help that way are left to join other groups or make their own way. Those trying to force their way in will likely be shot.

You play as Yudai Sayashi, a talented scavenger more commonly known as Yu. You follow his story and see him change from an idealistic young boy collecting goods for his home to a more distrustful young man. Yu is the leader of a group of treasure hunters called Durchhalten, who break up after a treasure hunt goes horrifyingly wrong and a death occurs.

A member of the band of treasure hunters hears about a device which may be to revive their missing member; the legendary Noah’s Ark. This leads to Yu trying to get them back together again to find the item, but many have moved on with life and refuse. Not one to give up, he investigates to find ways to convince them to help his quest. 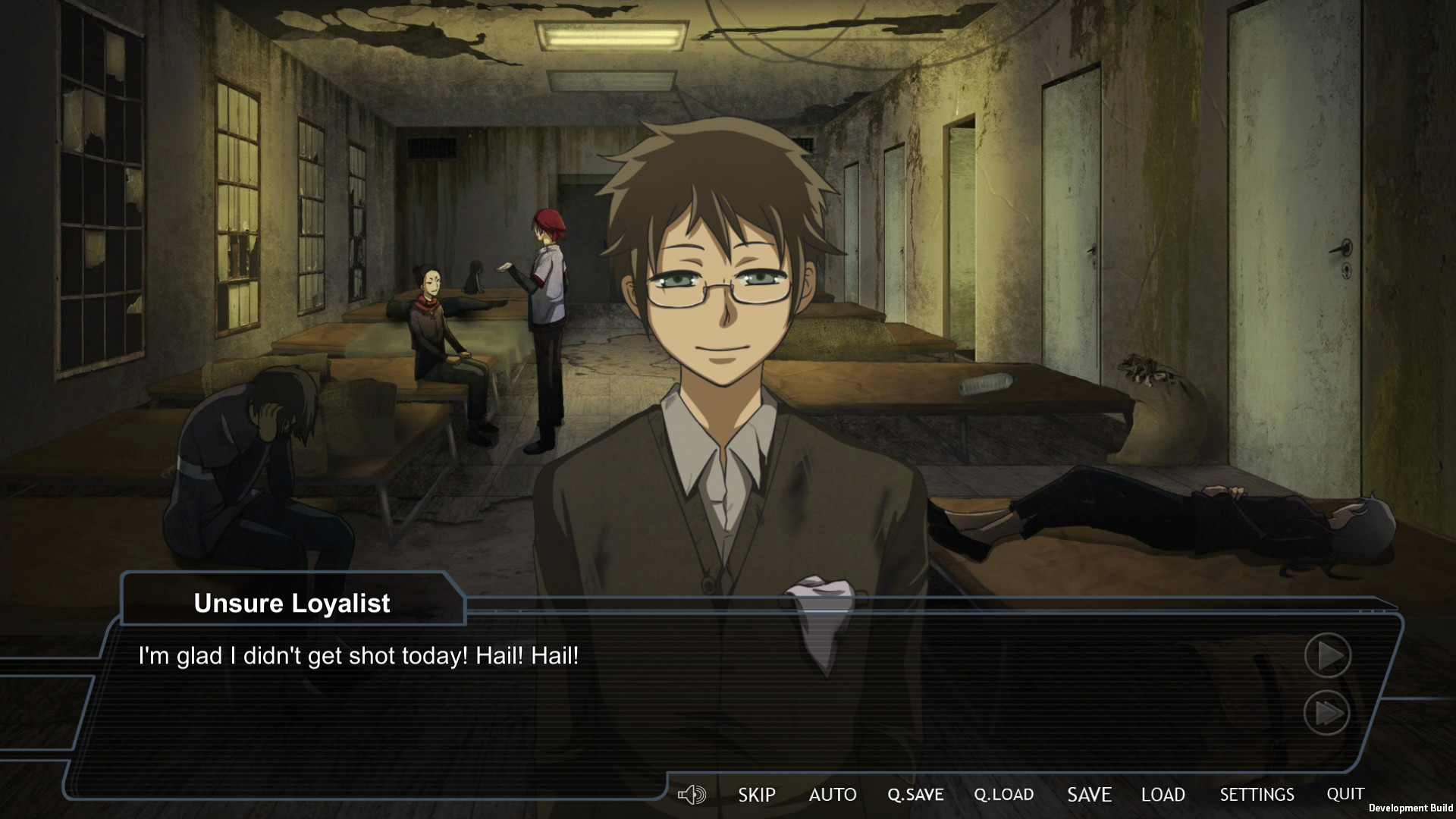 This is quite a deep story with a lot of background detail in the world that has been built and a dark and serious tone. It shows an idea of what could happen after society breaks down, power struggles between groups and different ways that people are trying to live their lives. It’s supported by diving into several of the main characters pasts and an interesting cast of side characters too. Through the story and investigations, you will make several choices which influence how things proceed. The story is certainly a strong point of this game.

Much of the story is uncovered by the point-and-click aspects of the game. This works by clicking on things in the environment to interact with them, whether to talk to someone, to read some text or to help solve a puzzle.

As you talk to people, profiles are built. These update as you uncover new information and can be used to help you decide how to best proceed.

Puzzles can range from simple ones finding a clue in the environment and then clicking the right combination of buttons to more complex such as turning ten lights green within four clicks, where buttons turn some lights on but others off. While some puzzles stand by themselves, many are all about being observant and checking the nearby environment for clues to help you solve it. Some of the puzzles did feel like their clues could have been more obvious to find, but I’ve enjoyed the challenge. I can see how this might be frustrating though as it is impossible to proceed without solving puzzles.

Items can be picked up and placed in the inventory. These can be used to progress in various ways. This is sometimes as simple as picking up a key after finding it or solving a puzzle and holding it until using it. In some cases, you can find items and combine them to use too. An early example is combining six items to find a password.

Overall I enjoy how the puzzles are done in the game, but the major complaint I have is the user interface is not always obvious. Before becoming familiar with the game, there were points where I could not see how to exit a puzzle and go back to the room. As an example, at one point this was done by clicking at the bottom of the screen, but there is no button for it – just a changing mouse pointer. This is sometimes the case with parts of puzzles too, having to check all areas of the screen to figure out what is and isn’t possible to interact with and not much of a visual clue on screen.

Going back to the writing, the quality of the editing is high overall. The only issue I’ve noticed is a reoccurring one where apostrophes are often not used in contractions. 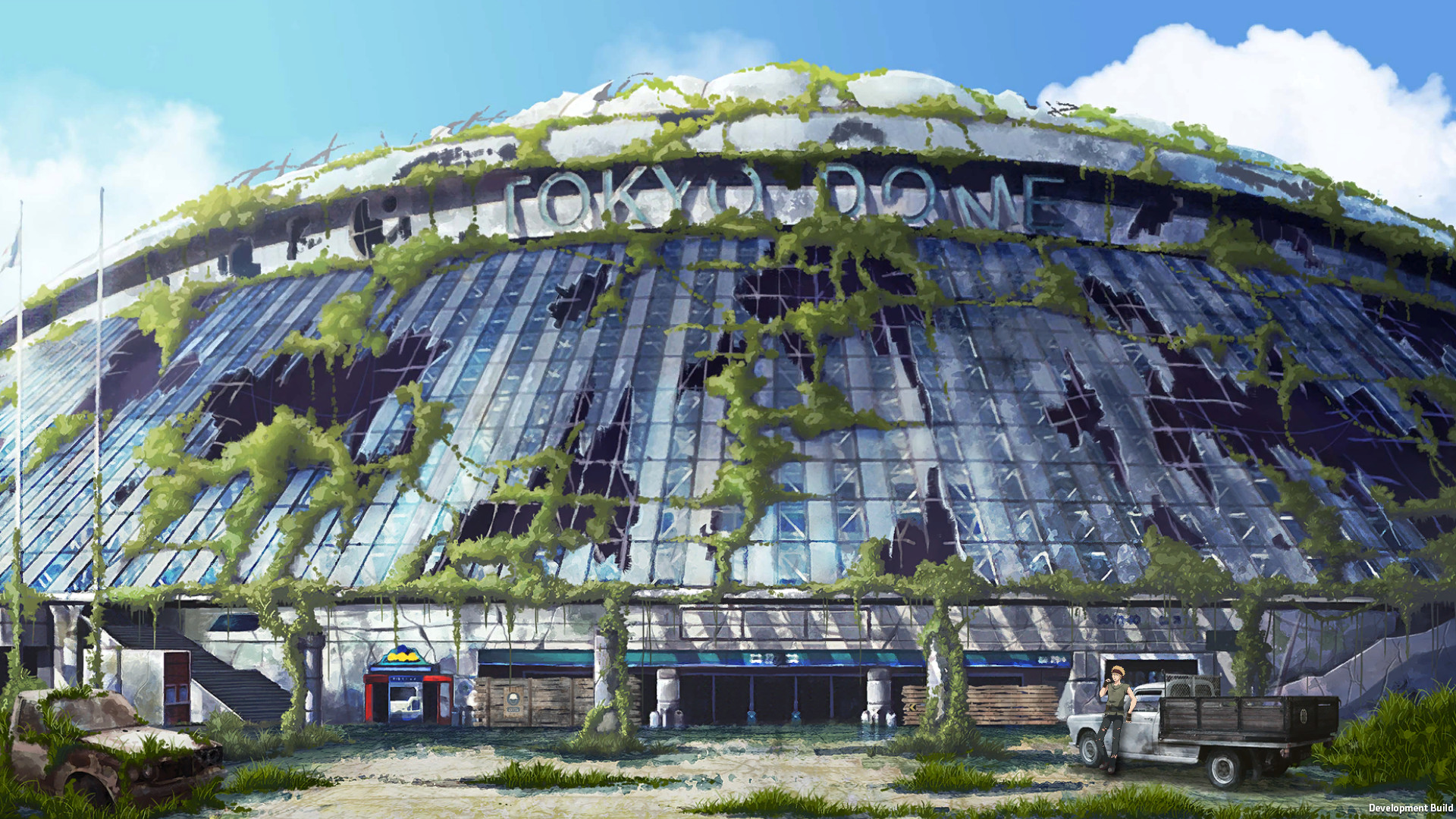 The visuals are well done overall. The character sprites, while not on the same level as some high budget visual novels are consistent and partially animated. They blink, their mouths move when they speak and some have other animations such as shining eyes or bowing actions. The backgrounds are very well done. Some are outright beautiful. Many have little touches of animation too, such as birds flying or a light bulb swinging with the light given moving along with it.

There are occasional examples of pieces of art which just don’t fit. An early example of this is an animated video showing movement from the back of a truck which looks far more realistic than the truck environment. A couple of the puzzles too. It might be that these are placeholders until art can be created.

There is a nice mixture of background music which works well to set the mood. 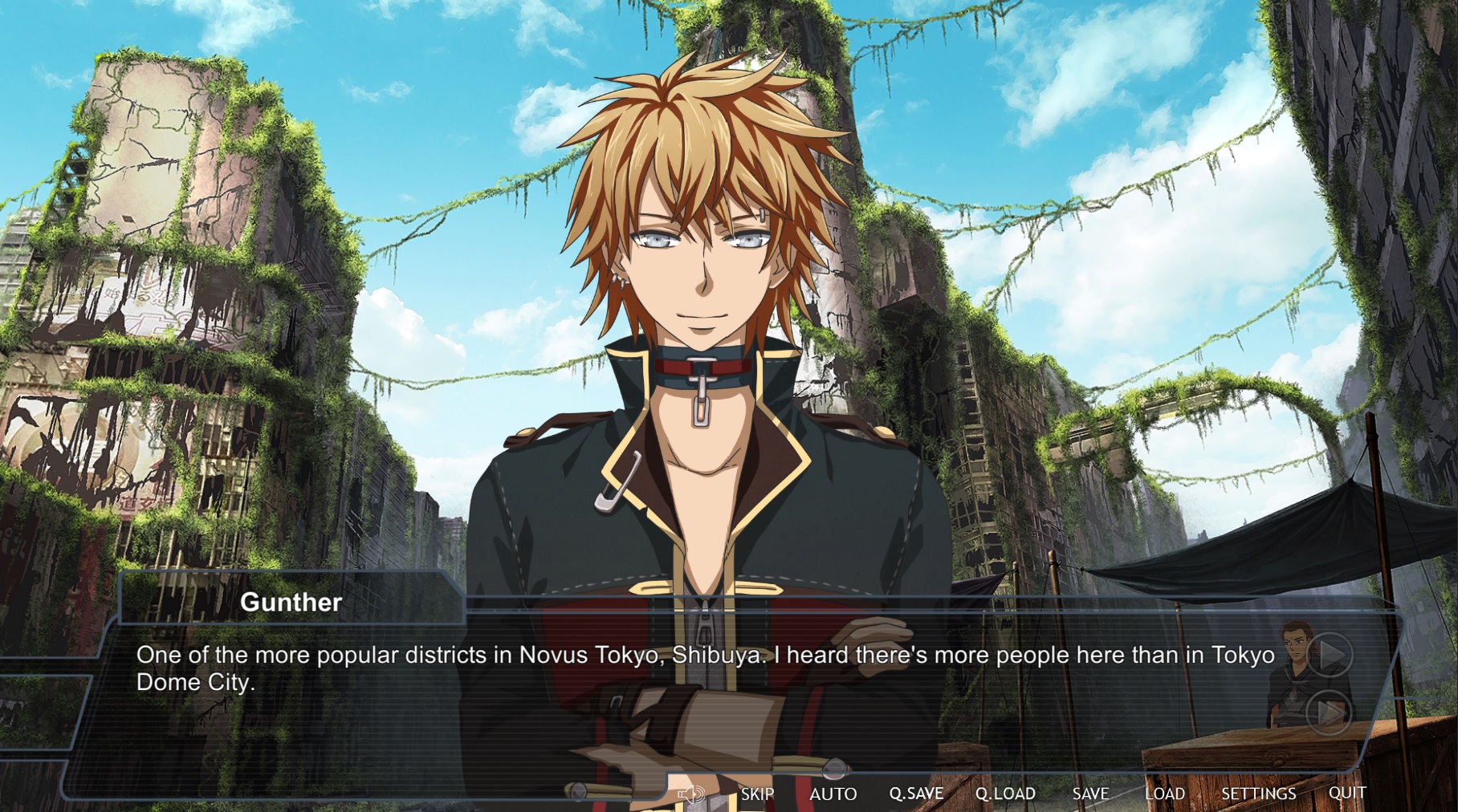 The game is partially voiced in the English language. I liked the voicing of the characters, but there are some issues with it. Sometimes the characters aren’t voiced, but this is not consistent. It can be just one or two lines or a large portion of their lines. When the characters are voiced, they can sometimes say slightly different things from the text too, which threw me off a bit. For example, the voice says ‘We don’t want this to turn ugly’, but the text says ‘Let’s not make this ugly’.

It is worth noting that the options are very basic visual novel options. Display mode, a few about text and a few about volume. It does still come with skip and auto functions, which is good. The game has a log function, but it does not default to the most recent text annoyingly enough.

I’ve enjoyed my time with Exogenesis ~Perils of Rebirth~. It does feel rather rough around the edges in some places and it needs more work to complete, but it’s certainly got a lot of potential.

While I think the user interface and some of the puzzles should be looked at, the story and world are both very interesting. I look forward to seeing this progress into a full release.

The game can be bought here on Steam and here on Itch.io.

Thank you to Kwan for providing a code for the game.