The Witch’s Love Diary is a story about stories. It starts off by following a girl named Alice who visits a clock tower with her friends Yakko and Keiko. It is said that the clock tower can grant wishes, but when Alice goes there, an unusual book drops from the tower. It is the diary of an unknown young man.

This visual novel was developed by Qoobrand and published by Sekai Project. It is available on Steam (PC) and Denpasoft (PC).

If you are buying this game on Steam, it is worth noting that a lot of the mature content has been cut. The mature content itself is fairly standard stuff for the most part, with a couple of mild fetish scenes. The content can be restored with the free 18+ patch. This patch can be found on the Denpasoft website. All mature CGs are censored by mosaic.

On the topic of mature content, there is quite a lot of it with a total of 24 adult scenes. Some of these are shown very early in the game, almost as soon as the prologue is over. It is worth noting that several of the adult scenes in this game are not exactly the perfect show of consent, but it does not cross into the territory of sexual violence. 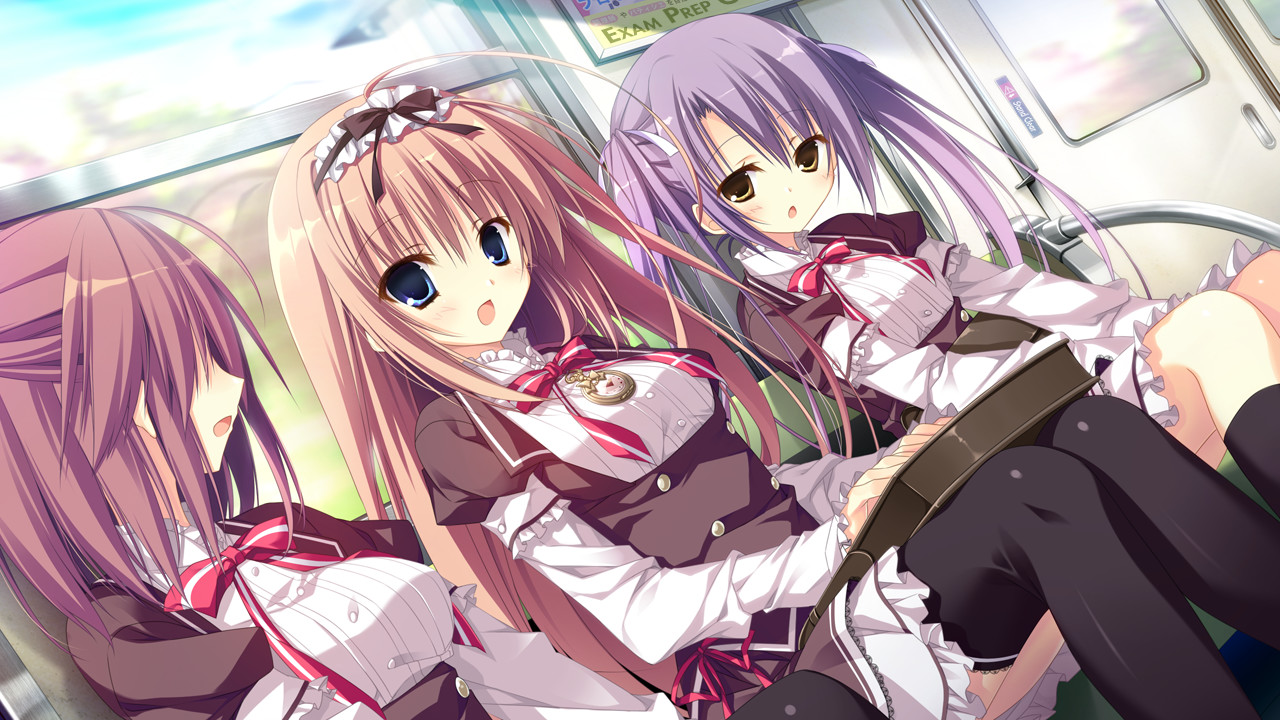 It is very difficult to say too much about the story of this game without giving away some serious spoilers. I will say that the story mostly follows two characters – Alice and the unknown young man. Their stories mostly take place in and around the school but they involve a strong fantasy element with comedy, mentions of magic and mythical beasts.

There are a few major twists in the story. I felt like most of them worked, but a particular one seemed to both come out of nowhere and completely changed the direction of the story.

The story can feel somewhat disjointed at times. This is as when Alice reads the diary each night, the story switches to the boy’s perspective and then back to hers. This is compounded by the fact that the same characters appear, but may have different histories. Quite a few versions of similar events are shown too. While not entirely accurate, it could be said that multiple similar but not identical worlds are shown. The visual novel sometimes jumps back and forth between different versions of the story too. 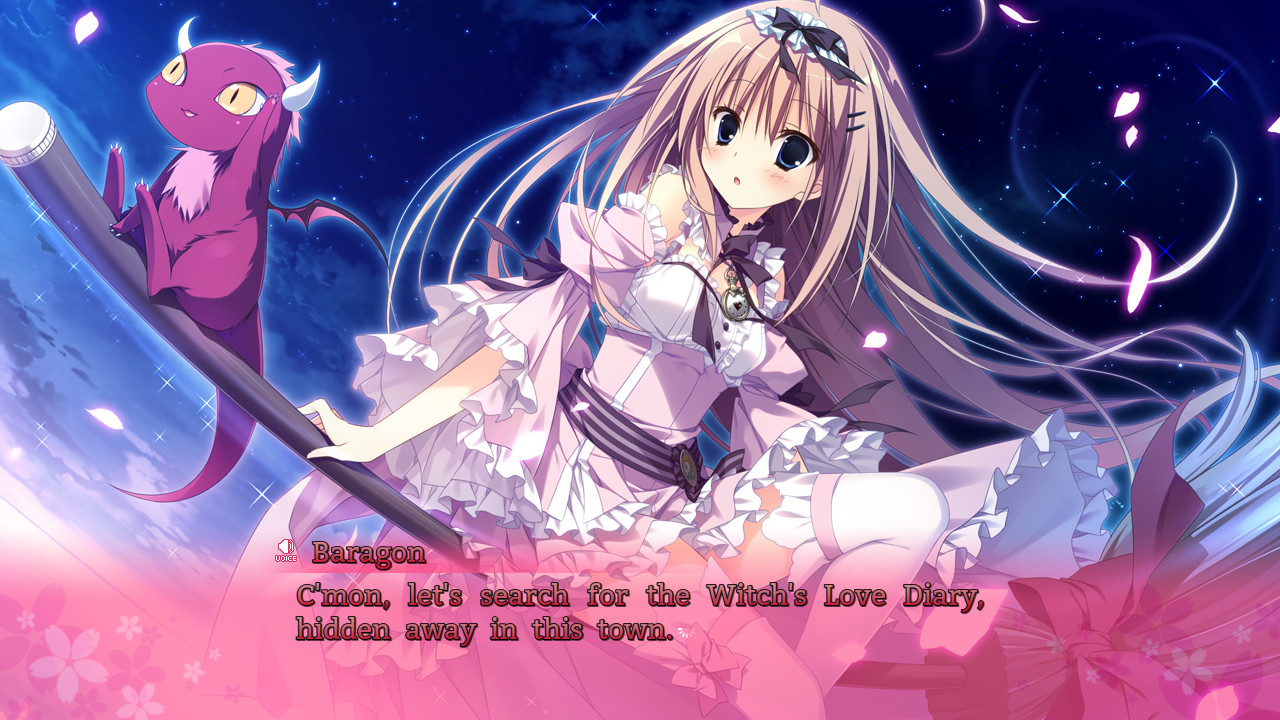 Due to the way the story is told, several parts of the story are repeated with minimal changes. Many of the unique scenes also felt repetitive too. I think that the story could have been condensed to about 30% of the length without losing too much. There is certainly an interesting story there, but it does start to drag when similar scenes are shown over and over. The visual novel took me about 20 hours to fully complete.

The game involves some choices, but in a normal playthrough, you will see stories for all of the girls, each with a mini-ending of their own. It isn’t like many other visual novels in that you make choices and it leads you towards an ending for a single girl.

The endings for the multiple girls which occur throughout the story all come together in a way for the real ending. I felt the ending was somewhat of an odd direction to take it.

I will say that I did enjoy the start of the story and certain points near the end. The tedium of the middle does bring it down, but there are still a lot of enjoyable interactions within it. 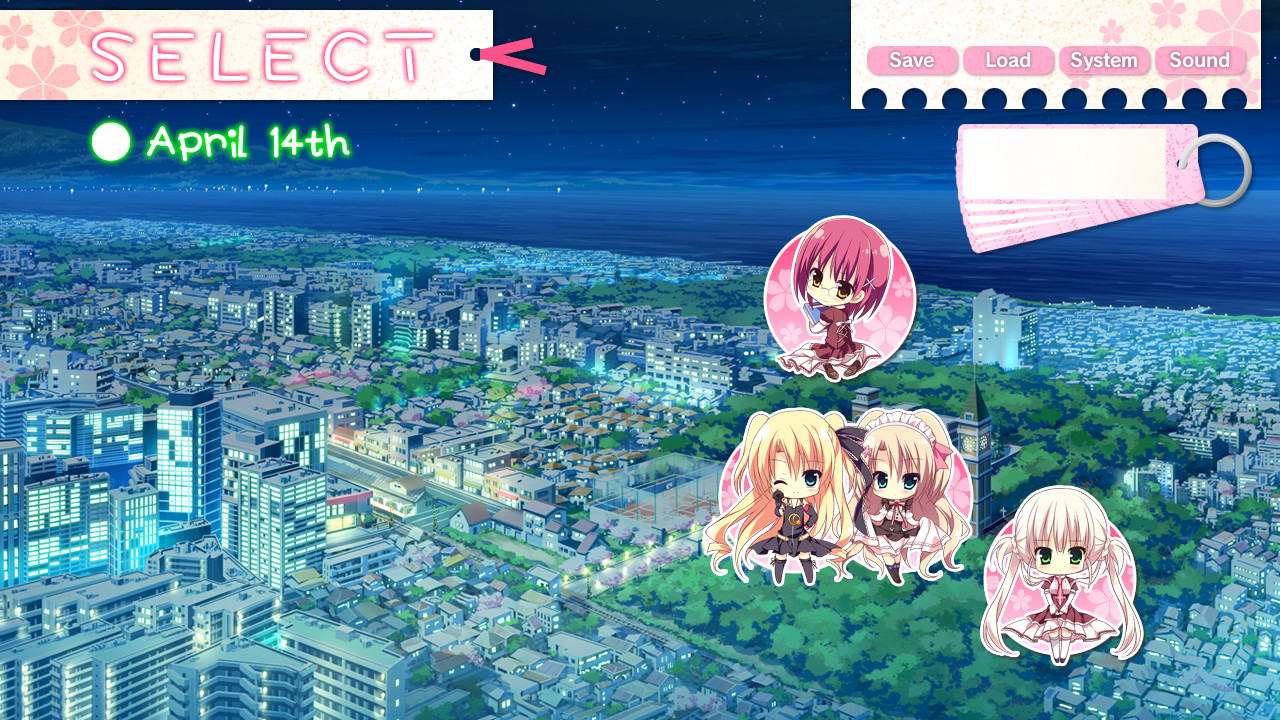 The two protagonists are rather different. Alice could be described as somewhat naive and kind. She is very straightforward at times. The young man is shown to be kind, but very much an over the top playboy. He is known to pick up girls on the street, hit on his teacher, go into hostess clubs and has been seen coming out of love hotels. Alice once describes him as too forward and creepy.

Outside of the protagonists, there are five main heroines, some other girls who have their own scenes, but not full endings and several supporting characters. 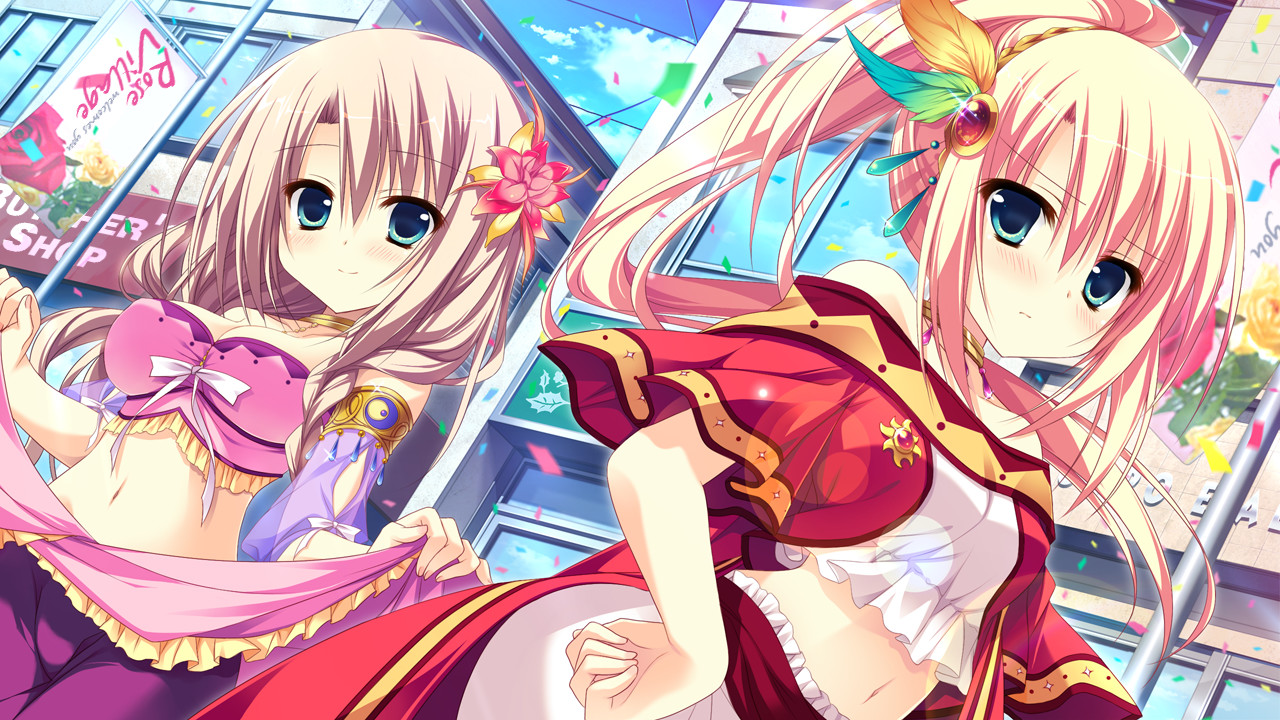 Rei and Canon are the same age as the students, but they act as the principals for the school. Rei is diligent and outgoing, trying to take on everything. Canon is Rei’s opposite, being very shy and preferring to work in the background. These characters have what I found to be the most interesting backstory. 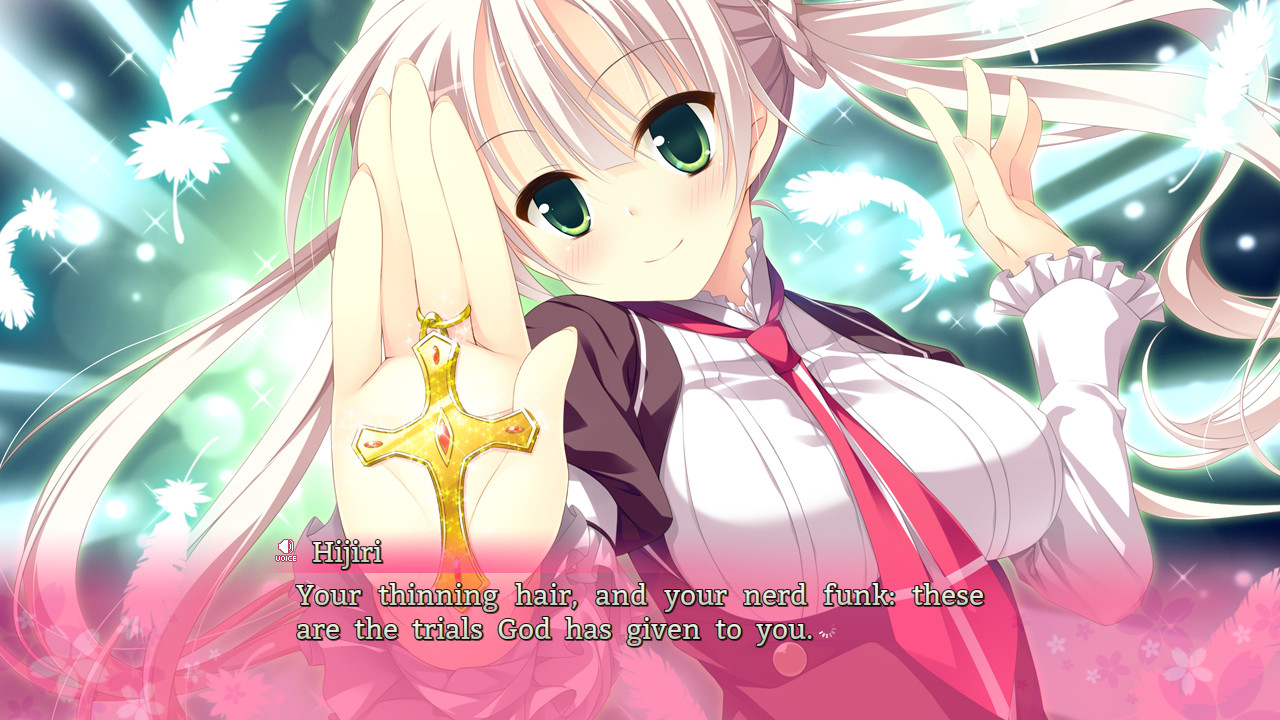 Hijiri is a nun who believes that she is an angel. I initially didn’t enjoy her character, but after seeing her story I grew to like her more. She is shown to not be very aware of the world and social norms. 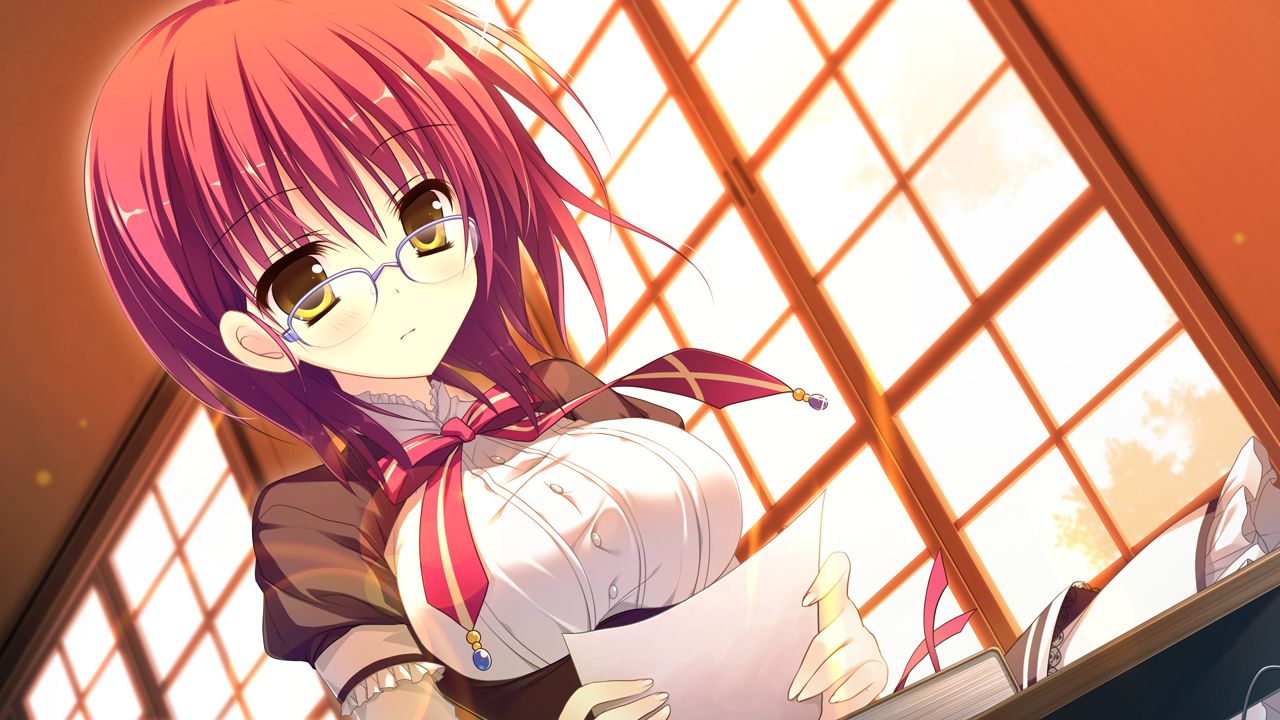 Mii is the class representative and a rather serious girl. She is involved heavily in various school activities and works part-time too. She is known to hold herself back from things she wants and gives priority to helping others, a bit too much. 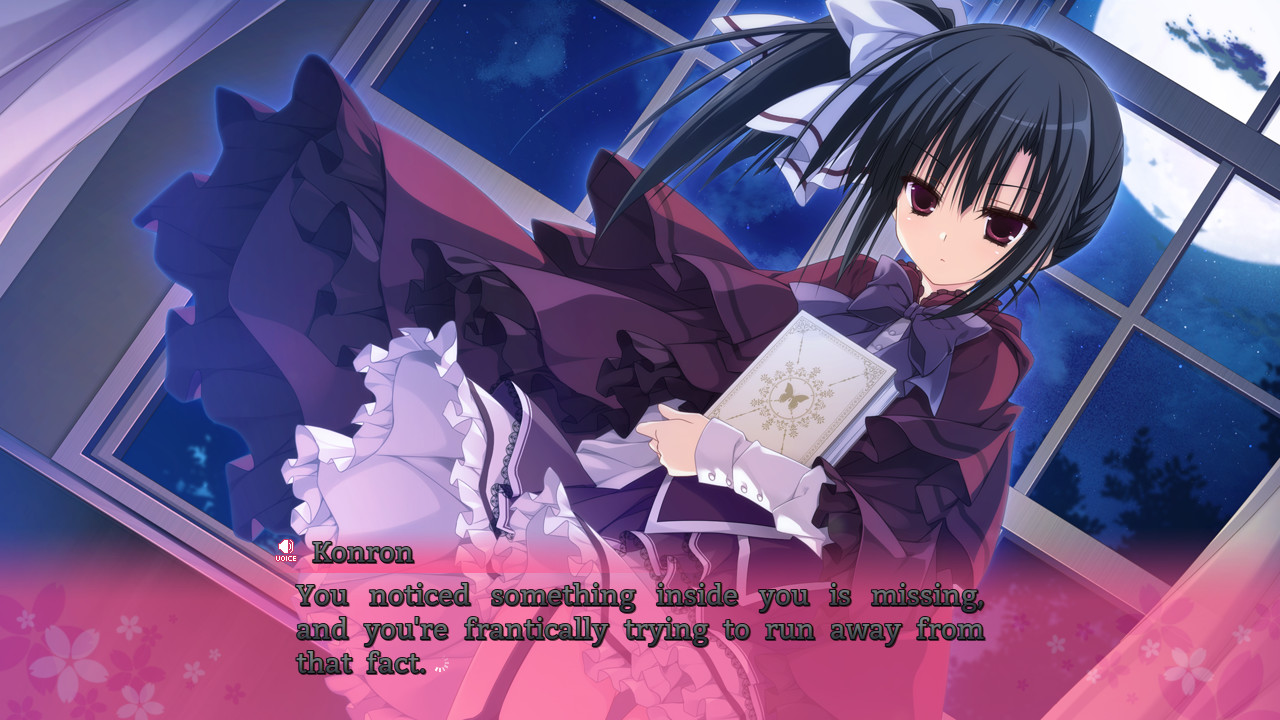 Konron is a mysterious girl. She doesn’t always turn up to class and has rumors about her and what she does in the occult club.

Of the girls not mentioned yet who have their own scenes, but not an ending, Ren stands out. She is a movie-obsessed girl. It feels odd how they handle her as it feels like she should be a main heroine at first, but she’s never really introduced into the main story unlike the other girls with scenes but without an ending.

The majority of the characters are fleshed out quite well and they’re all interesting in their own way. One thing the game does very well is giving time to even minor characters. Some parts of their stories can be quite depressing, despite all the jokes and funny reactions. The balance between serious themes and comedy to keep things light is done well.

The quality of the editing is high. I did not notice any issues with typos, misspellings, grammar or formatting issues. As these commonly occur in visual novels, this is quite impressive.

The visuals are very well done. There are some beautiful CGs and backgrounds. The character sprites are great too. The game does not make much use of effects, but video is using sparingly.

There is a fairly wide selection of background music which all fits the scenes well. This includes 28 background tracks (one of which is a vocal version), an opening song and two ending songs.

The game is voiced well. All characters voices seem to fit and even side characters are voiced. The only exception is the young man.

The options are fairly basic visual novel options. The extras menu is the same, having the gallery to see CGs, repeats of the H-scenes and options to listen to the music.

I definitely enjoyed reading through The Witch’s Love Diary, but I do feel somewhat conflicted.

The style they used to tell the story was particularly unique, but as mentioned it did come across as disjointed. The overall story was interesting and the characters were great. I can’t really say I’d prefer it as a standard visual novel where routes separate though, as it wouldn’t work with the story.

I would recommend The Witch’s Love Diary, but I feel like the best way to appreciate it may be to take it slowly, reading it a chapter at a time.

The game can be bought here on Steam and here on Denpasoft. The 18+ DLC can be found here.

Thank you to Sekai Project for providing a review code for the game. Purchases made by Denpasoft links earn a small commission which goes to help supporting domain and server costs.