I’ll be frank with all of you, Kingdom Rush Frontiers is  a mobile port. I know, I know, that probably caused half of you to click off. Hear me out first. Growing up, I went through this weird stage of cellphone gaming. I’d go out and buy $100 iTunes cards just to buy a crap load. It border-lined obsession. There were hits, and there were flops. A lot of flops. Kingdom Rush Frontiers was the former. It’s a Tower Defence with RPG elements. I have to say, one of my better purchases. And now, well, it’s on console. Gone are the days of misclicking because of big hands. I’m just kidding, I’ve got child hands. You don’t care though. You want to know how the game stacks up, so let’s just get into!

Lord Malagar and his forces of evil have attacked Hammerhold!

The call has been placed, and you’re the one to answer it. Fortunately, you were able to fight off his evil forces and defend the hold. Unfortunately, Malagar himself was able to use the confusion to his advantage. He’s taken the powerful and legendary Hammer of Power. On the run, he rushes through your outposts, the Wasteland, and several other locales. You wonder to yourself, is he panicking. His moves seem random, but are they really. Of course not. The dastardly Malagar has a method to this madness. He knows that the local tribes won’t take too kindly to trespassers. As such, they’ll inadvertently help by slowing you down.

It’s up to you now, General. Find him, get the hammer back, and bring Malagar to justice!

Kingdom Rush Frontiers is quite minimal with its narrative. The only substantial bits you’ll encounter are right before a map. A book appears and in it, a blurb describing the events that lead to this particular mission. It’s really well put together, but it’s missing something. I felt that IronHide could have injected a bit of personality here. As it currently sits, it’s a bit flat. There’s no life. No flare. Since this is the only sign of narration, it could’ve used that. Especially because of the way it’s presented. Like someone‘s briefing you. If that’s truly the case, why not put in character. Make it pop. Right now, it’s just there, and I feel by adding in emotion, it could’ve heightened the overall quality.

My other minor beef is its underutilization of comic strips. Every so often, these will appear. They’re supposed to be visual representation of what’s happening. There are also tiny bubbles of dialogue. This is another case of needed personality being injected. It would have been cool to put in some witty banter. Maybe Ironhide ran out of syringes though. Someone order them.

Now, you’re probably thinking to yourself that none of this matters. And you’re absolutely right. I’m just a literary snob. I nitpick. A lot. I’m also single, so. 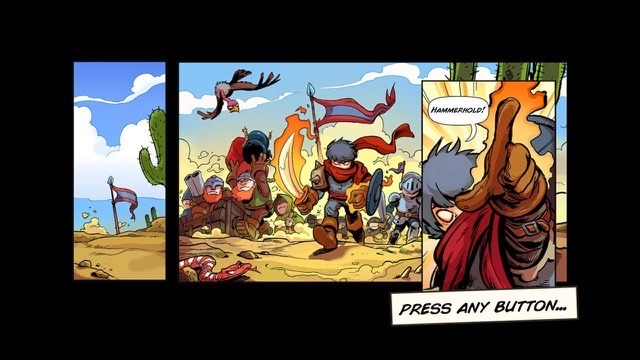 If there’s one thing you want your Tower Defence game to excel at, its stability. The genre is known for running a train of enemies on you. So, a rock-solid frame-rate is of the utmost importance. That split second of chugging could be the difference between winning or losing. Happy to say that’s not an issue with Kingdom Rush Frontiers. IronHide did an amazing job porting it over.

It’s worth noting the touchscreen does work too. However, during my time with it, I didn’t find it intuitive. I’d have to sometimes press twice. Using the actual buttons is by far the better choice. Responsiveness was immediate.

It’s cartoony. The sprites are simplistic, yet surprisingly detailed. It sort of reminds me of those toys from the ’90s. What were they called…Mighty Max, I think. Anyway, it went well with the sporadic inclusion of the aforementioned comic strips. That’s why I just wish they made use of those more. They’re so beautifully illustrated too. The character portraits reminded me of those old school RPG’s. A recent example would be Divinity Original Sin 2. The animations, well, nothing much to say other then they were stable. It was like my face after a shave. Smooth.

Gather around, this is what really matters. The bread and butter of Kingdom Rush. The pros are numerous, but I definitely found a glaring con too.

Let’s get the biggest drawback out of the way. You can’t speed up battles. To me, that’s a must. Each map can go for 30 minutes, or even more. In most, you don’t even need to place defenses everywhere. You can focus on a concentrated area to maximize damage. Thing is, if you do that, you need to wait for enemies to reach the vicinity. And wait. And wait. And wait. You get it. Compound this with the fact that in the harder levels, you’ll probably fail once or twice. You’re then forced to play through those 30+ minutes just to rectify that one mistake. It got tedious. I think if IronHide implemented a speed up function, it would be a fantastic Quality of Life enhancement. Not only would it shorten battles, but it would lessen frustrations. How about saving a few televisions, eh?

That’s the only con I found. It’s clear sailing onwards. As a JRPG geek, I loved the leveling system. See, this game also provides heroes. These are super soldiers that can hold their own pretty good. With each “ding”, you’ll earn skill points. As I’m sure most are aware, these upgrade your abilities. Abilities that are unique to each hero. There is a cap of level 10. Once you reach it, all abilities can be maxed out. In other words, there‘ll be grinding, and not the dance club type.

I’d also like to point to the star rankings. With each map, you have a chance at 5. The stars you receive are then used to upgrade your defenses. Archers, Artillery, Magicians, and Defenders. First 3 stars are awarded based on your performance. Not that kind. The other 2 are earned by completing special challenges. They’re tough. Instead of all 4 defenses, you’ll only have 2. Wait a minute though, the ones locked out are the ones you were focusing on. Good news then. You’re able to reset the entire thing. This will allow you to reallocate to the necessary structures. A very useful feature for those that hate excessive grinding.

Lastly, let’s discuss the strategy. It’s well done. I had a lot of fun. There were times I could legitimately feel that rush of adrenaline as I killed. Scary, but it was invigorating. I felt involved. I should note this game requires memorizing. A lot of it. Insanity will ensue and you’re forced to quickly react and think on your feet. No time to breathe. Don’t be weak.

This is where the speed-up function would come in handy. Usually, this will happen close to the final wave. I’m normally bad at quick reactions. So, I failed a few times. The great thing is that my failure was on me. Kingdom Rush Frontiers was never unfair. For as bloody hard the later missions get, it was my ADD that caused my loss.

The music is, well, it’s there. I never felt it did enough to really strike a cord. Get it. It was generic. After a few days of listening and playing, I’d mute it. Instead of the in-game soundtrack, I listened to podcasts. I feel like a good BGM is supposed to get you hyped. Not feel indifferent. I will say that to it’s credit, for me, I do like gaming while listening to said podcasts. So, this wasn’t that big a deal. It would have been nice to have more effort put in, sure, but you could say that about anything. It’s subjective, and not a dealbreaker.

Kingdom Rush Frontiers is addictive. Point Blank. The gameplay is super fun, and I loved the level system and the minor customization options available. The lack of a speed up feature is a huge miss. Like I said, most maps last a half hour. Failing at the last minute and having to replay everything just to get to that one spot was tedious. It was frustrating. Music is quite generic, but Kingdom Rush Frontiers quickly became the title to play while listening to podcasts. I like that.

Kingdom Rush Frontiers is a tower defense game. So, the Gameplay is king. And for fear of being redundant, it’s damn addictive. If I didn’t have more obligations to tend to, I’d be plucking away at earning 5 stars. Hell, when I’m done, you can bet your booty I’ll get to it. Here’s to hoping IronHide port over the other titles in the franchise!

Kingdom Rush Frontiers can be bought digitally on Steam or on the Nintendo Switch and PlayStation 4 console stores. You can also buy it on Humble Bundle for PC. Purchases made via Humble Bundle links earn a small commission which goes to help supporting domain and server costs.

Thank you to Ironhide Game Studio for providing a review copy of the game.

Senren Banka – Review | Can a sword be a waifu?

Senren Banka is a visual novel by developer Yuzusoft and is published by NekoNyan, who have a great reputation amongst the visual novel community for localization work. It takes place in the rural town of Hoori, a town so disconnected from the rest of the world that buses only run once an hour and not […]