Senren Banka is a visual novel by developer Yuzusoft and is published by NekoNyan, who have a great reputation amongst the visual novel community for localization work. It takes place in the rural town of Hoori, a town so disconnected from the rest of the world that buses only run once an hour and not during morning or night. This is very much a middle of nowhere town, surrounded by mountains and nature.

If you are buying this game on Steam, a lot of the mature content has been cut out. A free 18+ patch can restore this. This can be found on the NekoNyanSoft website. Versions bought elsewhere such as Denpasoft are the full 18+ version. The sexual content itself is, for the most part, fairly standard with several sex scenes per character. Mosaics are used for censorship and cannot be turned off. 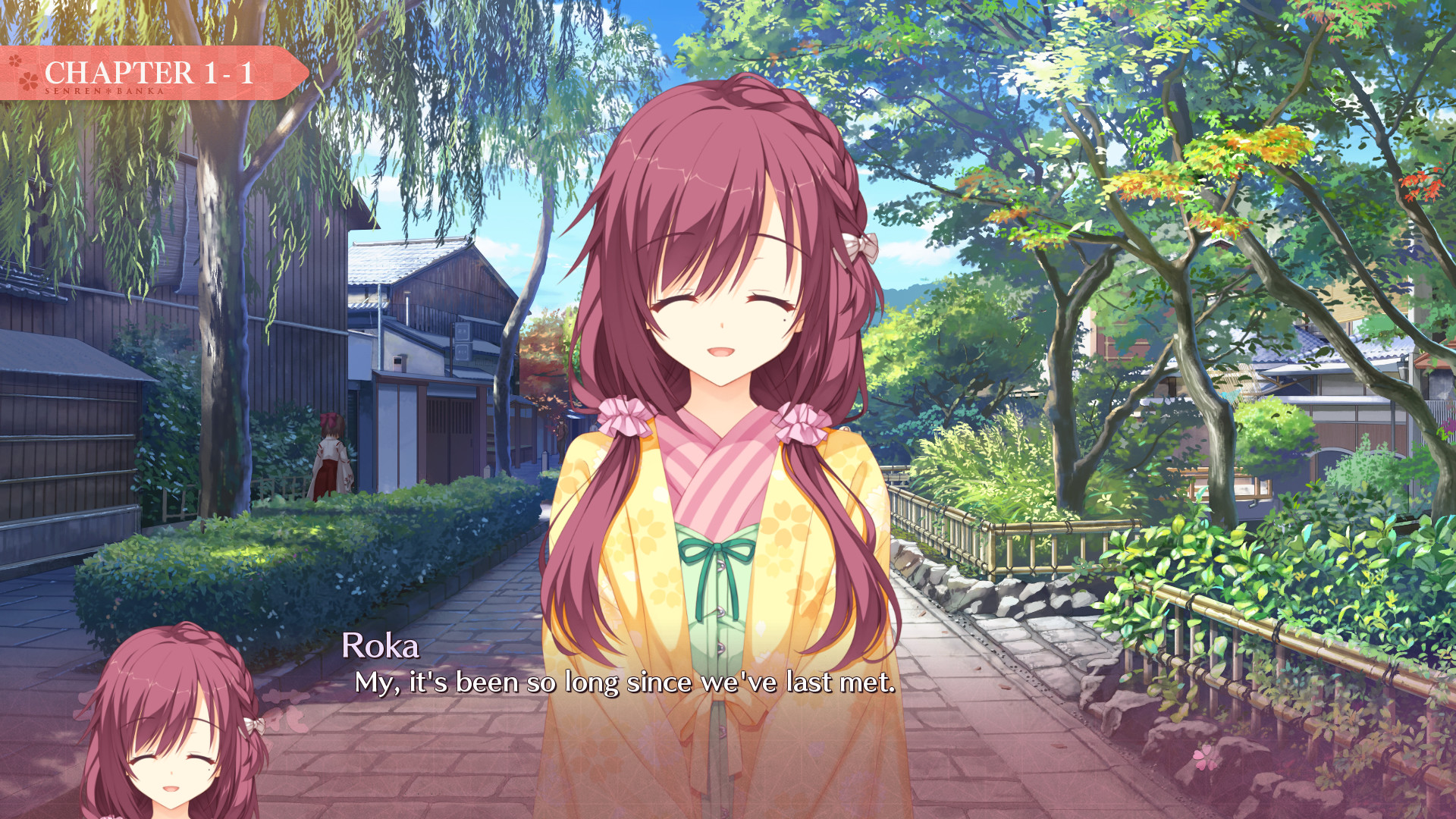 Through our protagonist Masaomi’s arrival to Hoori, we learn more about the town. It is a charming town that has been stuck in history in many ways due to its isolation. It holds onto many aspects of old Japan, which I felt gave it some charm in the environments used. Despite being isolated, it is also a tourist destination due to a legendary sword said to banish demons being stuck into stone. People would come to try and pull it out, but it is said that only those fit to wield the sword can move it. This is the how the story of Senren Banka starts.

Admittedly, this did make me think of the Sword in the Stone from Arthurian legend or even more recently Thor’s hammer from Marvel comics. Despite the similarities, enough details were different to make things feel like it did not just take an existing story and use it. 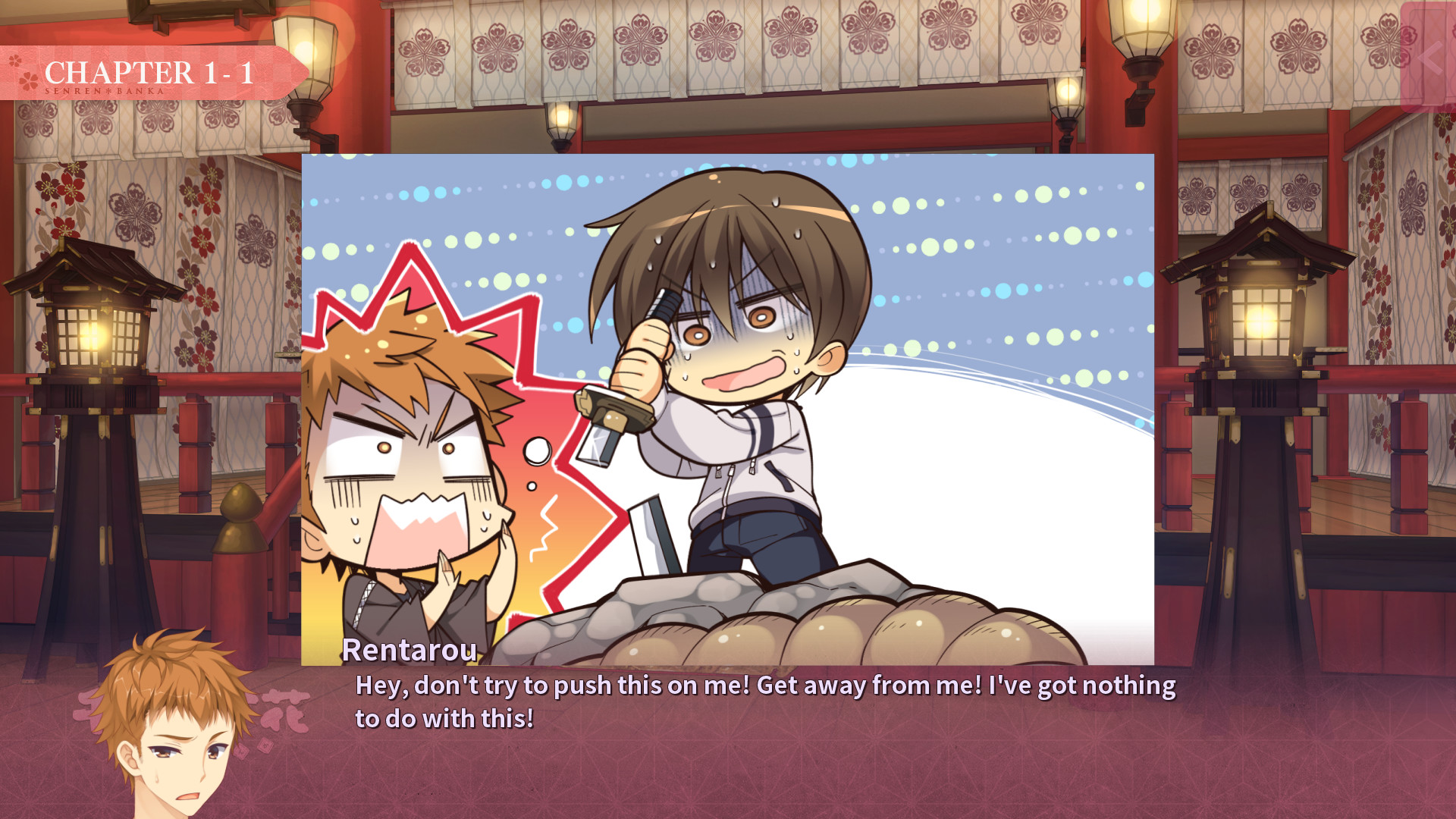 Due to the issue with the sword pulling, Masaomi ends up living with and engaged to the Shrine priestess, encountering several other girls including a ninja, a foreigner, and two childhood friends. This also started his quest to fight monsters and end a curse on the land of Hoori.

The adventure of tackling the curse and learning how to combat the monsters in the mountains is the overall goal of the common route. I felt like it was well-paced and had a very strong story, with a lot of comedic moments and scenes where you get to know the characters spread throughout. I found learning about Hoori and the circumstances behind its unfortunate history to be one of the most interesting parts of the game. It set the scene very well and kept me engaged the whole way through. It took me five hours to complete.

After the common route, it splits into five character routes, though one of those splits in to two endings. I personally felt like it was a bit disjointed as the tone changed between them. The common route was more of an adventure story, while the character routes felt more slice of life, with the topics of legends and curses moving into the background. The change in tone also came with a change to a slower pace and less serious topics. 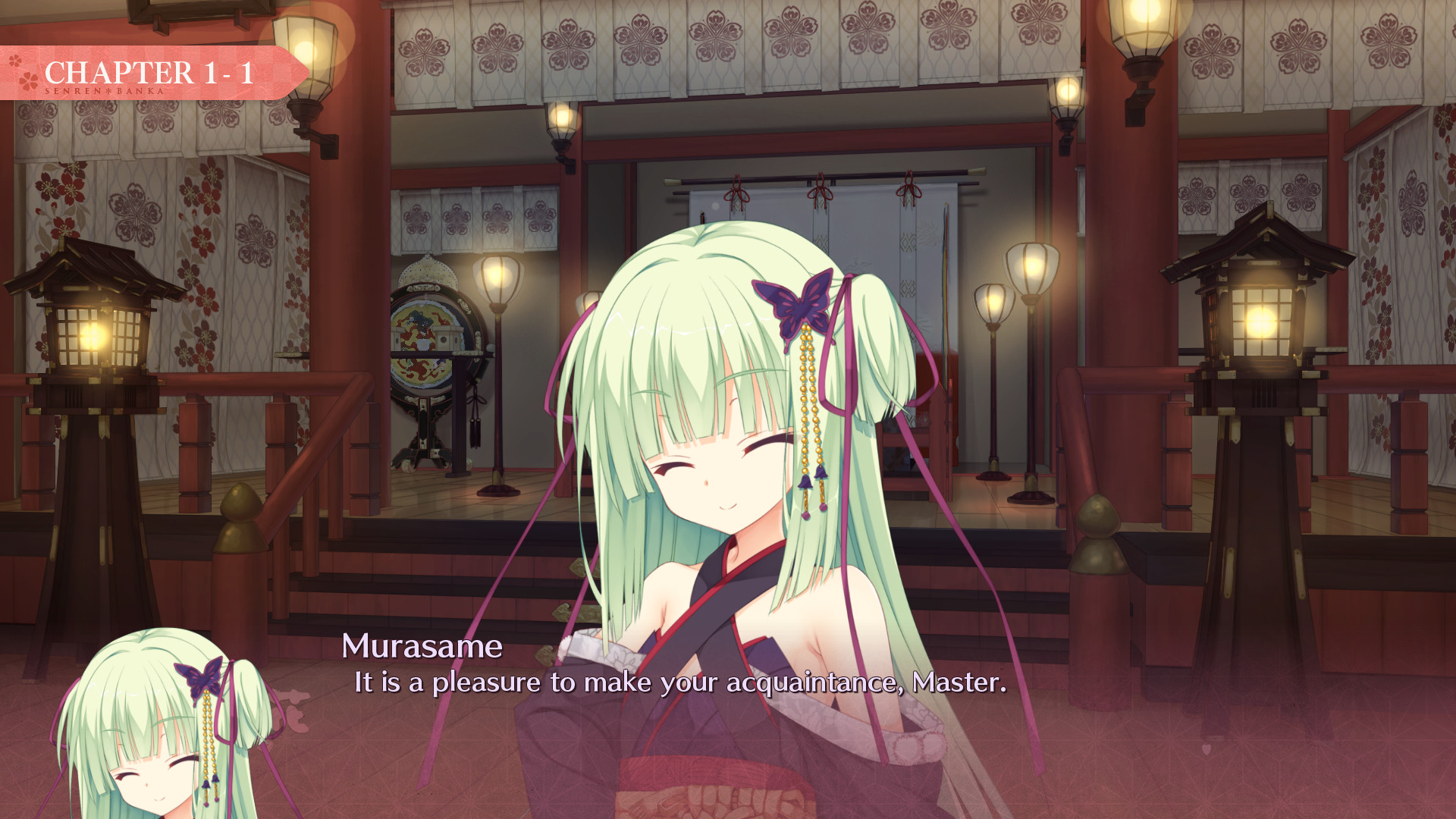 As Senren Banka has a varied cast of characters with fairly unique and detailed personalities, I enjoyed the character routes more for the interactions with them, rather than anything else. There was quite a lot of comedy in these, but the stories told varied in how interesting they were. Being more character-centric, this isn’t too unexpected but it was a bit of a let down coming from such a strong common route.

One feature which I really appreciated was the flowchart. This actually allows you to see all of the choices made and lets you go back and change them. Any unlocked choice could be selected, which made opening up all of the routes after playing through once a lot quicker than skipping through the text until getting new choices. This let me focus more on getting to see the character routes.

I enjoyed the characters in this game quite a lot and as mentioned, felt that they were well fleshed out and interesting. 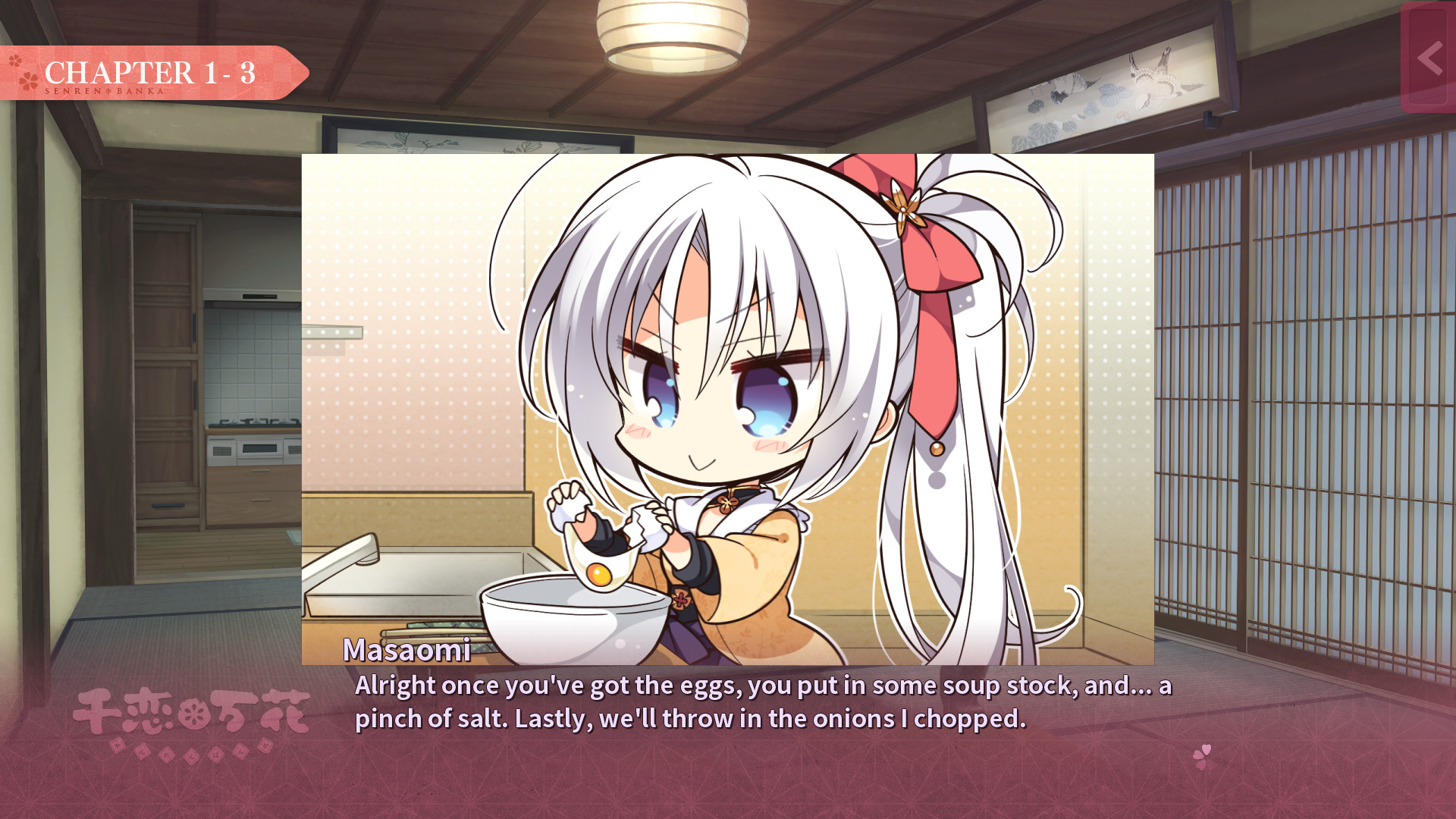 Yoshino the shrine priestess often acts very seriously and seems difficult to get close to. You learn that she is actually very earnest and can act quite immature at times. She is extremely diligent with her duties, despite any personality flaws. Seeing the gap between the diligent Yoshino and the one who can barely take care of herself at times is a big difference.

Mako is the ninja bodyguard of the shrine priestess. She gets easily embarrassed, which isn’t helped when you walk in on her naked on the first time you meet her. Mako does not really have much of a life outside of her duties, but she enjoys romance manga and gets her ideas on love from them. Her scenes probably made me laugh the most of any of the scenes in Senren Banka.

Murasame is connected to the legendary sword and can only be seen by certain people. She will insist that she is not a ghost, but acts like one in many ways despite being terrified of them. I quite liked how her route explored her past but also showed off her loyalty to what she felt was her duty. 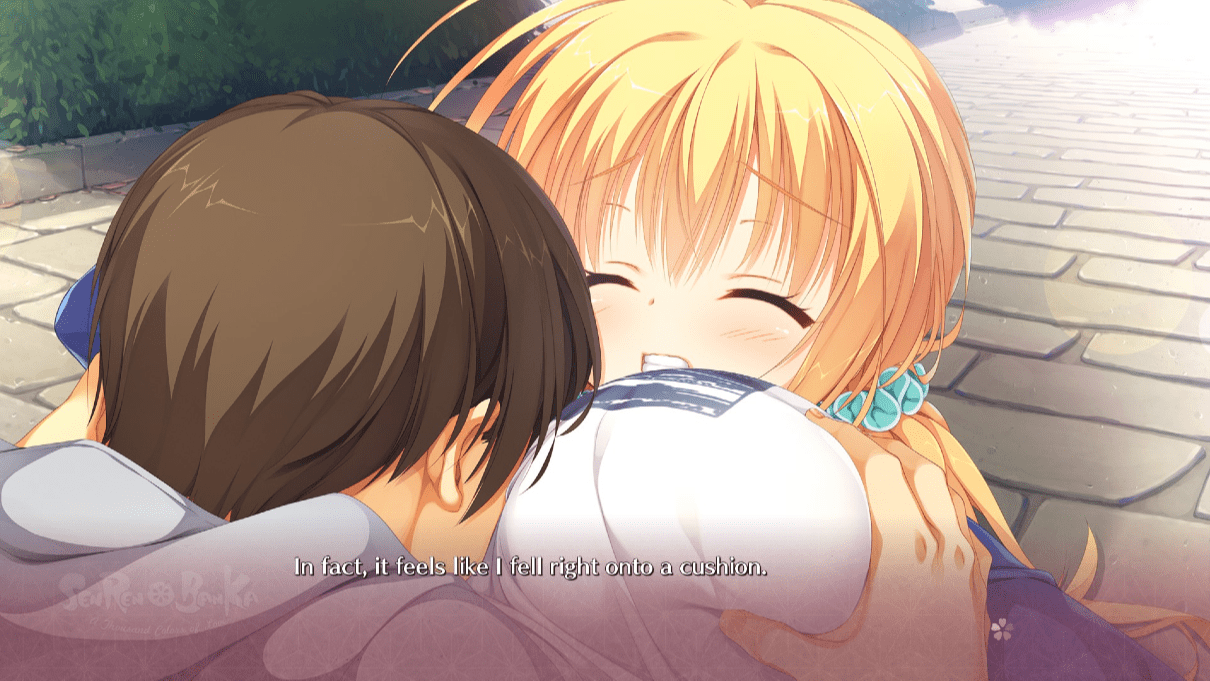 Lena is a transfer student from abroad. She falls into a fairly standard trope for a foreigner, having blonde hair, a large chest and occasional comedic language mistakes. Aside from this, she is always excitable and optimistic. I thought that she has an interesting backstory with how she came to Hoori.

Roka and Koharu don’t really get as much limelight as the other characters and even share a route. They fulfill the childhood friend positions, as well as the stereotypical older and younger girls. They aren’t as unique but are still rather fun.

The other residents of Hoori such as Masaomi’s grandfather, the shrine priest and the failure at life that is the male best friend all added to the story and comedy too. 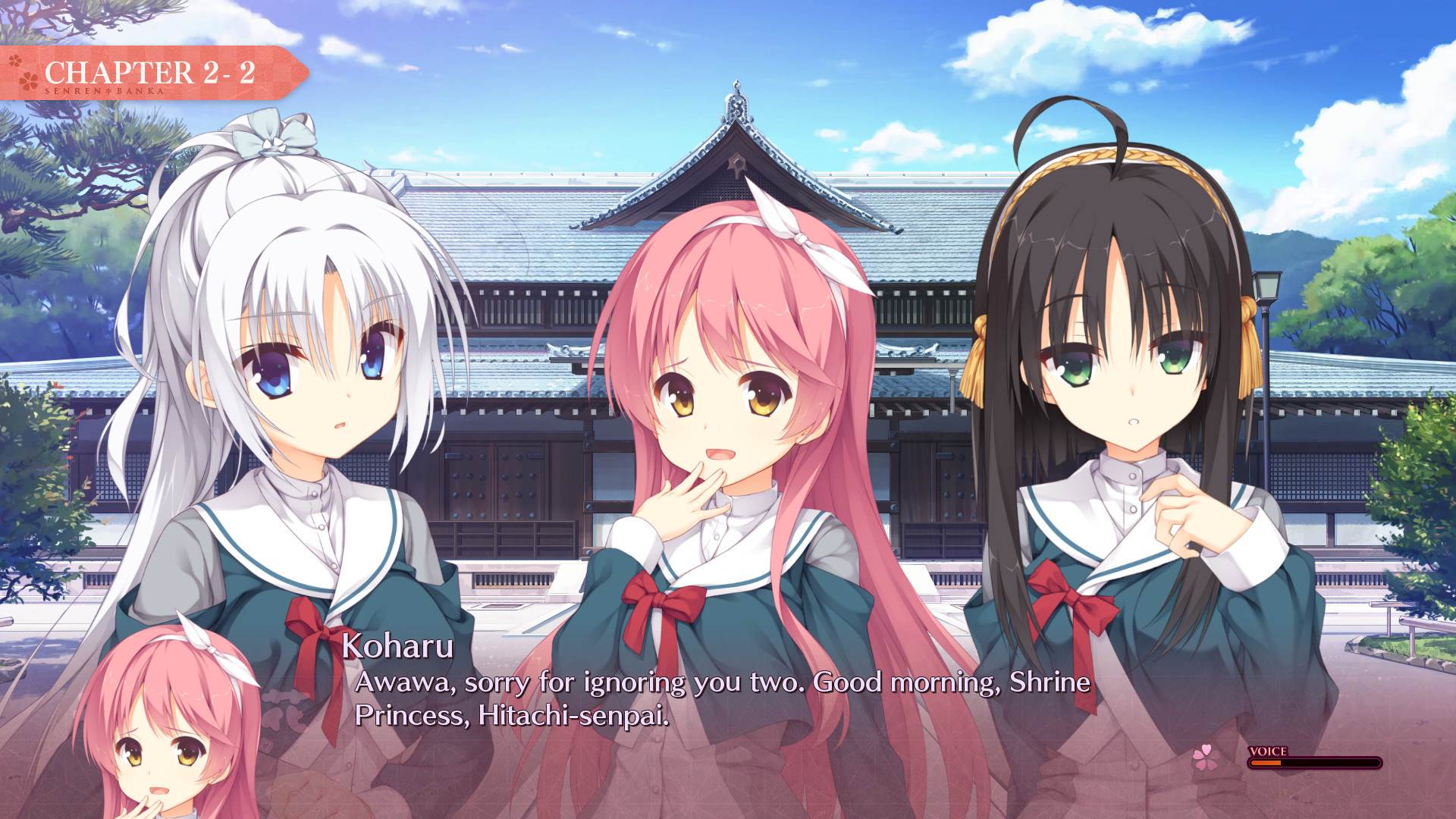 Each of these routes took me 2 to 4 hours for me to complete each. In total it took me 18 hours to complete the entire game to 100%. This was making use of the flowchart, not always listening to the full audio and skipping previously seen text so it will take some people longer.

As a bonus, each character had an extra scene occurring after their route. This was always fairly short and involved a sex scene.

The writing and editing itself are well done. I felt like the writing style itself helped to keep me involved in the story and I did not notice any occurrences of typos or grammatical issues. 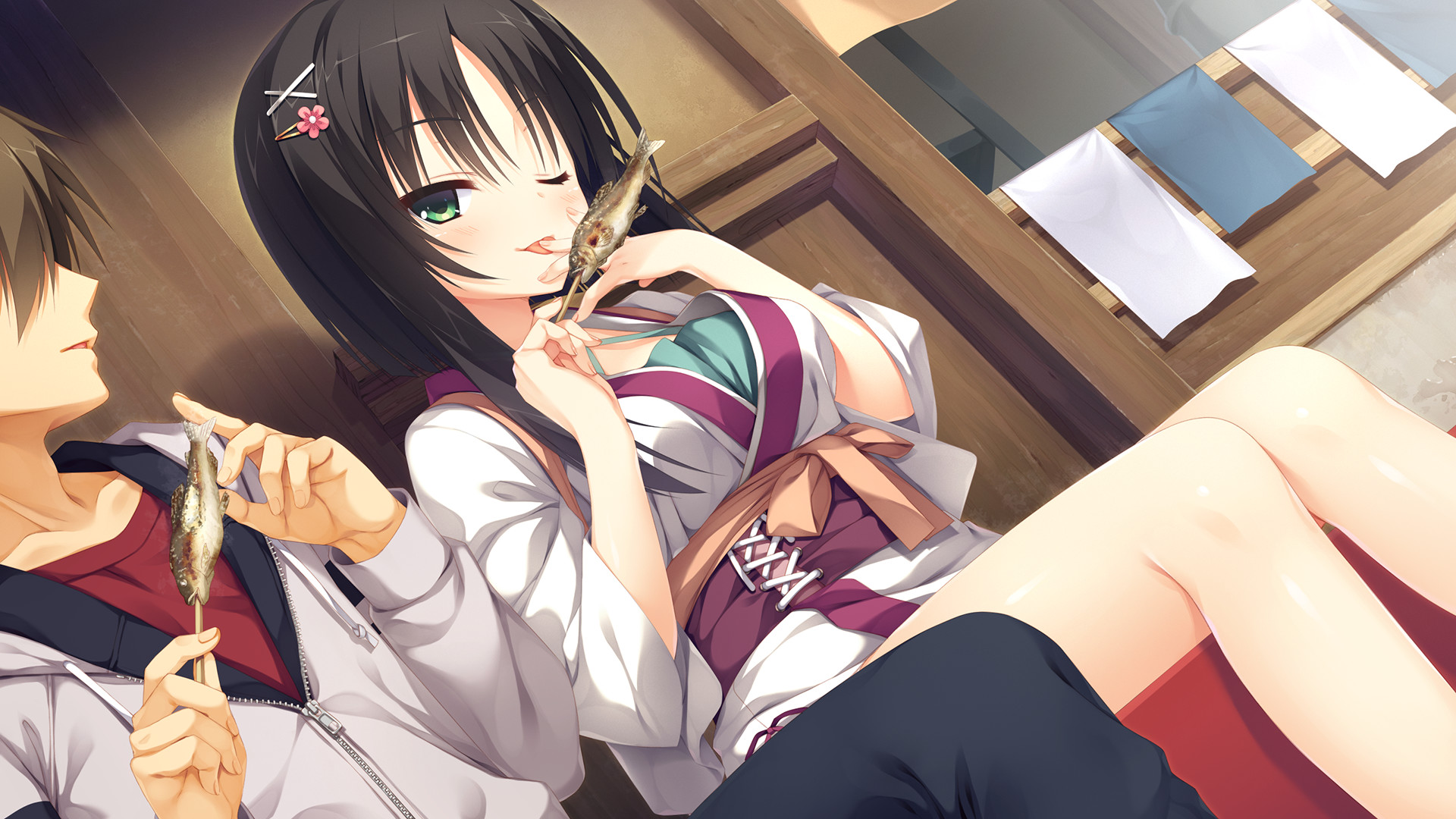 One thing which I particularly liked was that the sprite changed quite often to show different expressions. This even happened mid-line. It could look a little strange when cutting off audio, but I won’t hold that against it. 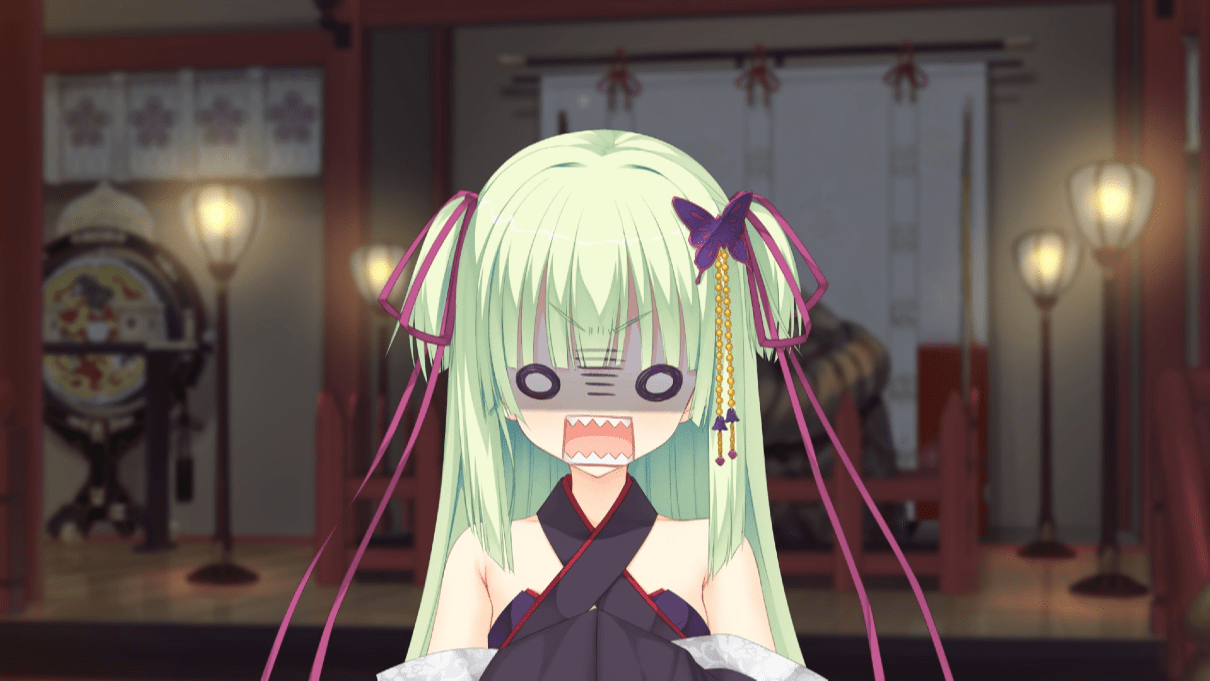 The music is all high quality and includes a huge variety of over 50 tracks. The background tracks are matched very well to the mood of the scenes, with the variety allowing for this.

The voicing is done very well too and matches their character’s personality. The quality is very high overall, the characters aside from the main character are all voiced, including secondary characters. I particularly liked Lena’s voice, which really showed a lot of energy.

As a bonus, there are quite a few nice extra touches which aren’t really required but are always appreciated. The options are fairly robust, with individual volume controls per character, mouse gestures to save, options around text and more. Steam achievements are also included if you own the game on Steam. The game even includes text in English, Japanese and two types of Chinese. 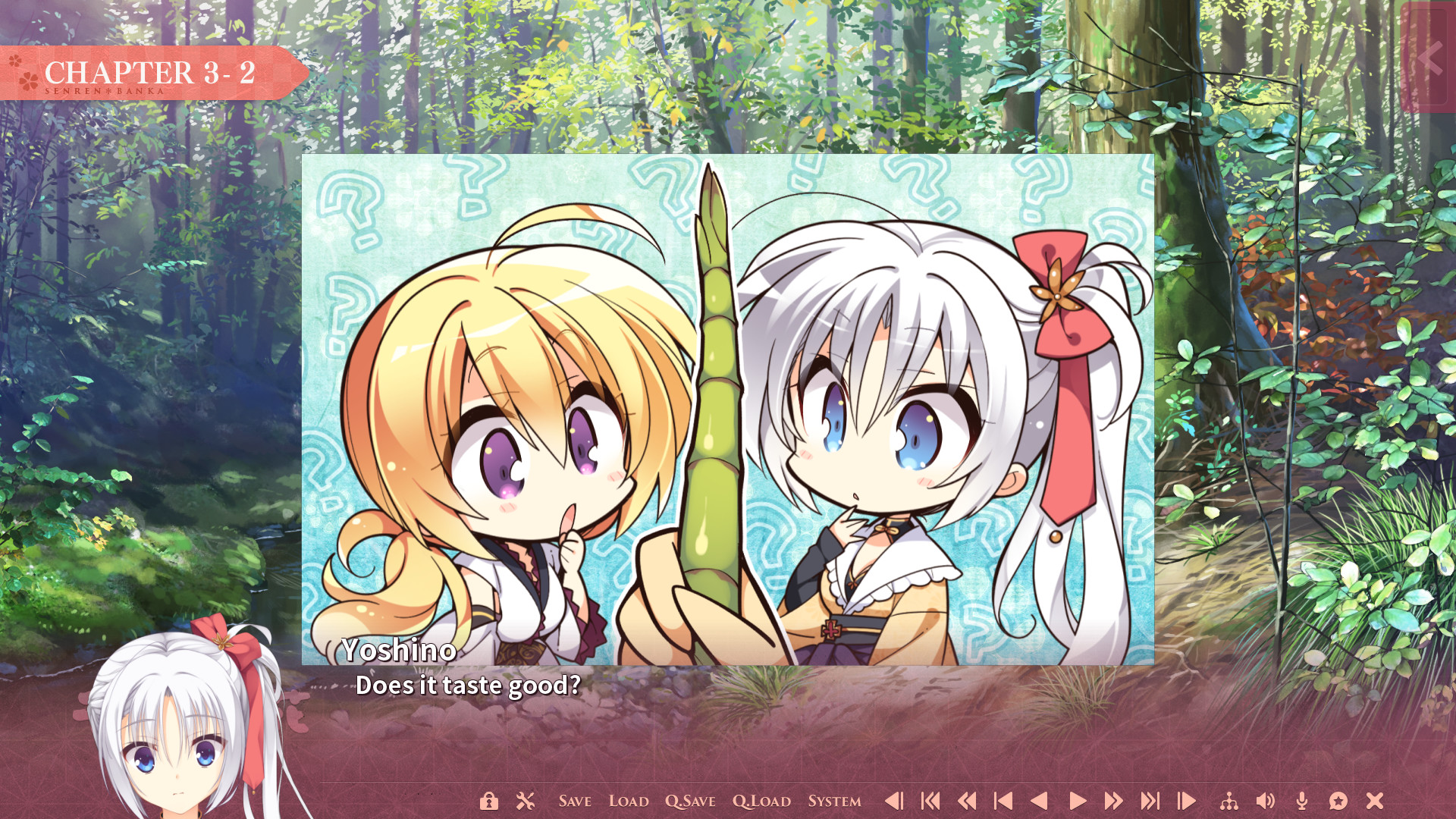 I would recommend Senren Banka to visual novel fans who feel they would enjoy the adventure story or the light comedy style the story is told with. While I did feel the story was weaker in the character routes, the characters themselves made up for it. The production values are high in the visual and audio areas. I enjoyed my time reading it and I believe many visual novel fans will.

Many thanks go to the publisher NekoNyanSoft for a review code for this title. Purchases made by Denpasoft links earn a small commission that goes to help supporting domain and server costs.

Atelier Ayesha: The Alchemist of Dusk DX is a remaster of the original JRPG released on the PlayStation 3 and PS Vita back in 2012 – 2014. It’s come back for 2019 – 2020, with added features and improved graphics. This new release brings the title to the PC, Nintendo Switch and PlayStation 4 which […]