At the dawn of the thirtieth century, the once proud and mighty human race was brought to the brink of extinction. An alien foe, known only as the Gigant, ravaged the surface of earth, leaving nothing but crumbling ruins. The last vestiges of humanity fled to the skies aboard seven titanic arks, leaving their homes, and what was left of their lives, behind. After hundreds of years of relative peace, the calm was shattered when Ark 5 was destroyed. During the excavation of the wreck, survivors were found, one of them being a small girl called Ciel. This is how Ciel Fledge opens.

Ciel Fledge is one of the most bizarrely, diametrically opposed games I have played – possibly ever. With a charming title like Ciel Fledge: Daughter Raising Simulator, you would expect a fairly humble title about a man/woman trying to successfully raise a child. As the brief plot summary detailed, Ciel Fledge has a little bit more to it, in more ways than one. 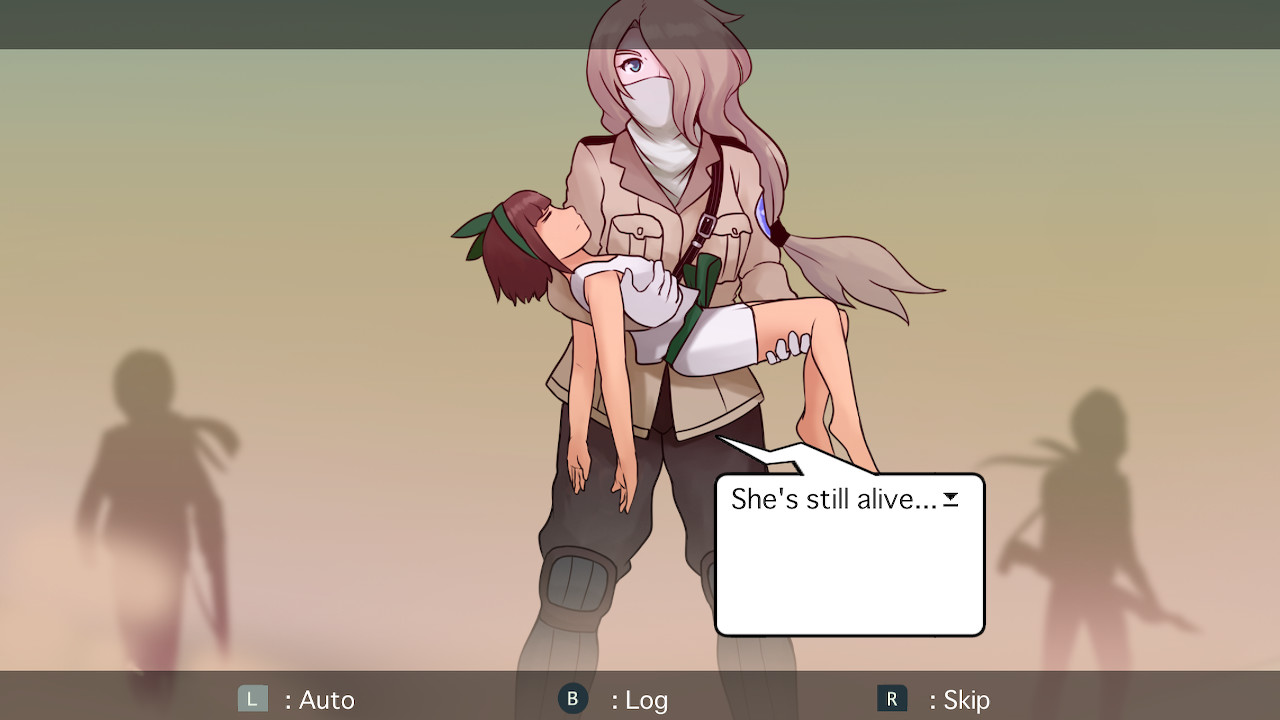 You play as an unwitting adoptive father/mother, who has been given custody over the mysterious Ciel. From the get go, Ciel wants you to make some pretty important decisions that will have major ramifications on how you play the game. These come in the form of selecting your background, focus and previous profession. Your decisions grant numerous passive benefits, as well as a few negative effects. There is a lot of power behind these decisions, more so than you will initially think. Considering you have not had any experience with the game at this point, these questions, and long term impact on the game, seem a little much. It encourages repeat playthroughs, sure, but I got a much greater urge to restart my playthrough several hours in. I felt unreasonably punished for not having the gift of clairvoyance, and knowing what scenarios would be thrown my way.

Once you get past the administrative grilling and determine your entire history, goals and lost dreams, you are left mostly to your own devices. Whilst I initially felt overwhelmed by the sheer number of options available to me, it became abundantly clear the Ciel’s user interface has been designed to be as wonderfully simplistic as possible. Everything is displayed in an easy to digest manner, regardless of the seemingly endless stream of numbers and statistics. It is clean, easy to read and thanks to the games numerous tutorials, super quick to get to grips with.

When it comes to raising your rambunctious little orphan, you get to engage with the ever engrossing schedule system. Each week you must decide whether or not you, as a parent, will go to work, spoil Ciel or bring the iron fist of parenthood upon her. These will influence a few fluctuating statistics such as mood, stress and affection. The more time you spend with her, the more she likes you, and the poorer you become financially. You also get the glorious task of deciding how much she eats, more or less boiling down to – a lot of food, not quite as much, or borderline childabuse levels of starvation. This decision will be the main contributing factor to her physical growth, specifically height and weight. Finally you can enroll her into a number of special classes, jobs and schools to raise her various stats and gain new skills. This is the real meat of the game, as how you build Ciel’s attributes and abilities will determine what she ultimately decides she wants to do with her life when the game comes to an end. 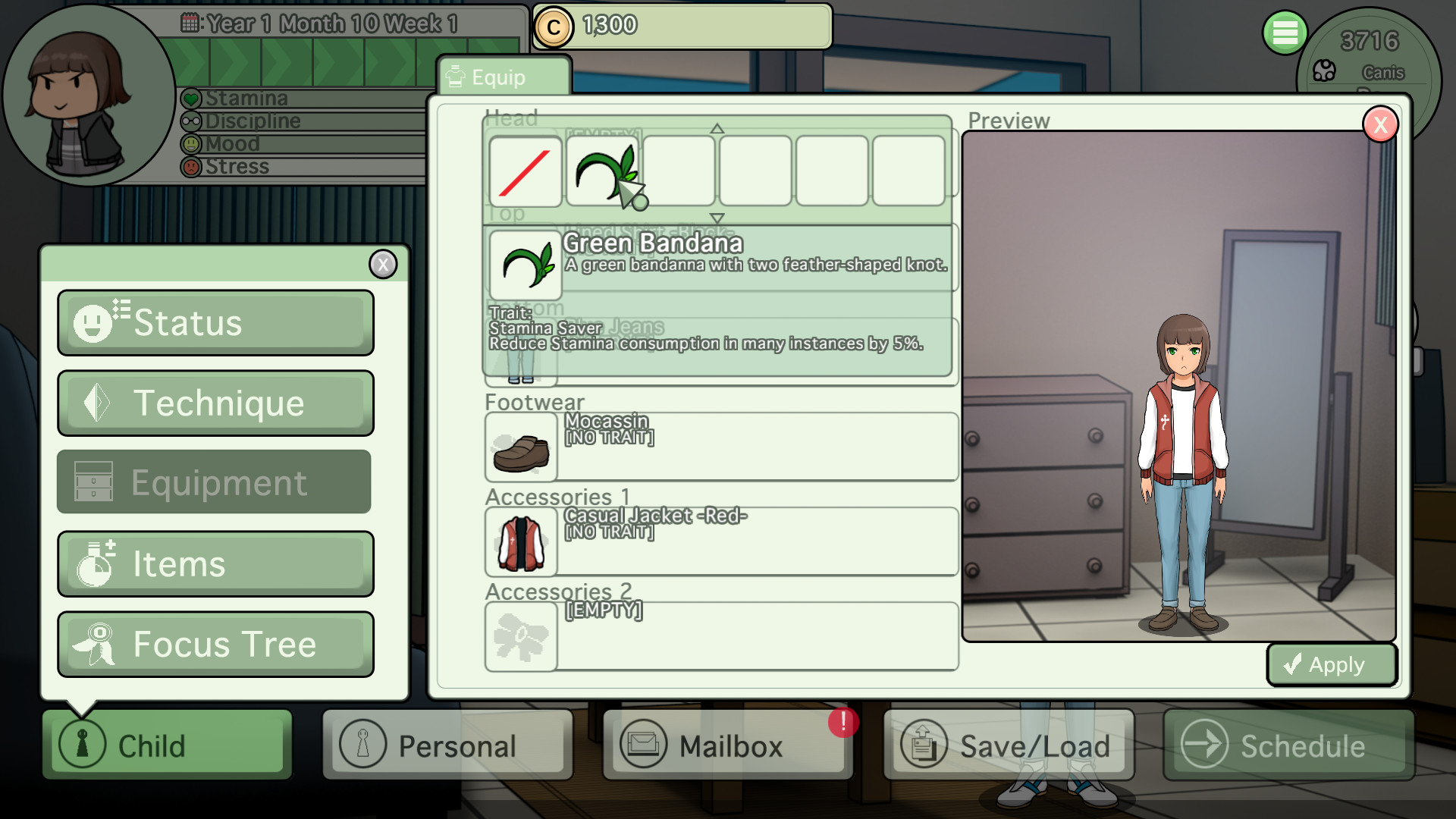 This is the core gameplay loop, and the most direct way you will influence Ciel’s development. As Ciel gains more proficiency, she will unlock new activities, which will allow her to learn new skills, therefore unlocking new activities. It is an initially satisfying gameplay loop that lets you make Ciel into whatever you want her to be. Unfortunately the whole system rings hollow once you start to truly grasp the false threads of intricacy. Your decisions, whilst undeniably impactful, result in you mindlessly throwing Ciel at whatever statistical brickwall you want, until you overcome it. Every week will boil down to you recycling the previous week’s mix of resting and specific activity, until she has mastered it. The game tries to combat this by capping your stats at certain ages, but that just slows down your unstoppable advance towards perfection.

This system continues to collapse in on itself when you realise there are practically no negatives to starving Ciel. Heck, it is an incredibly efficient way of saving money. Spoiling Ciel raises her affection significantly, whilst overtime work reduces it slightly. You can break the game simply by alternating between those two options, and starving her. Your money will stay consistent, she will not eat, yet she will love you regardless. Immersion, and gameplay breaking to the extreme. This ultimately leaves Ciel Fledge feeling tedious, unsatisfying and actively hampers any real connection to your virtual daughter. 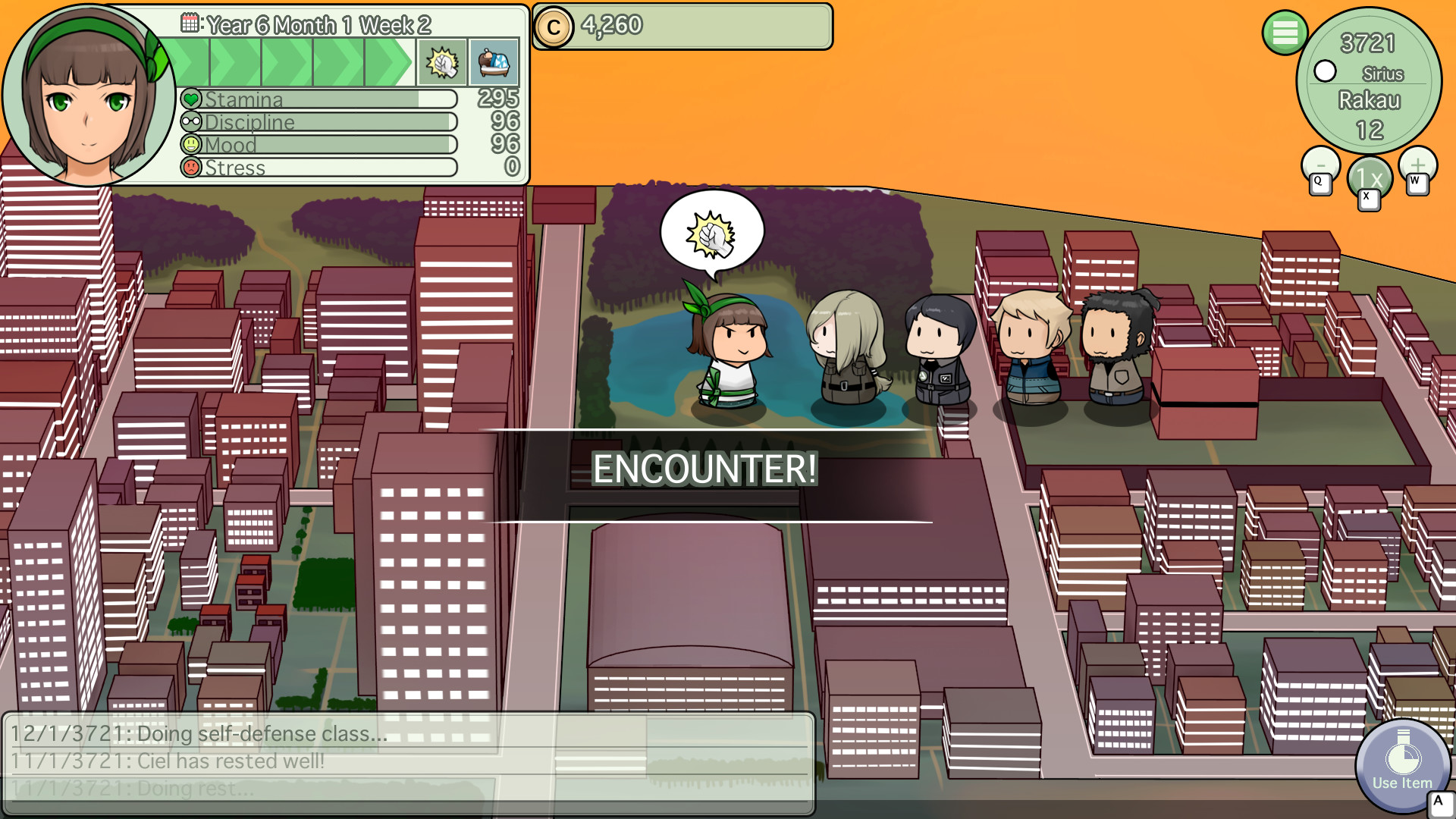 Ciel does have a number of other systems in place to keep things a bit more interesting, although again, these do fall a bit flat as these boil down to being side activities. Firstly, Ciel can engage in the battle system. This system will kick in during any key situation Ciel needs to overcome a difficult hurdle. This could be winning a race, participating in a debate or fighting the various hellspawn that litter the now desolate earth. Battles are a simple ‘match three’ card game, requiring you to string together various sets to reach a certain score, deplete a health bar or achieve some other arbitrary goal in an allotted time. This system itself is well implemented, and even comes with various combos and techniques which add a layer of depth, but this is a long game, and the system grows stale long before the end credits.

Linking into the battle system, is the friendship system. As you go about your day, you will passively accrue experience towards friendship levels. You can increase the gains by spending time with them on weekends, and doing so massively increases their effectiveness in support Ciel when battles do inevitably occur. They also provide Ciel with a number of passive traits should they become sufficiently friendly, which encourages a little bit of socialisation. Like most of the game however, this is as wide as a puddle and as deep as a drought. You can very easily grind friendship levels in a predictably tedious fashion, giving you a roster of besties who will carry Ciel through most challenges.

The last big system is the exploration system. Whilst thematically brilliant, it is executed as well as a broken guillotine. You grab some mates, venture onto the surface and watch a bar tick by, do some battling and then leave. You will nab some loot, gain a hefty stat boost and even become closer friends with whomever you decided to drag along with you. Despite its lack of depth, the consequences of messing up whilst exploring can be quite dire. If Ciel loses a battle, or runs out of stamina, she will become sick. This will impact her stat gains for the following week. Should Ciel collapse during a particularly dangerous battle, she will die. 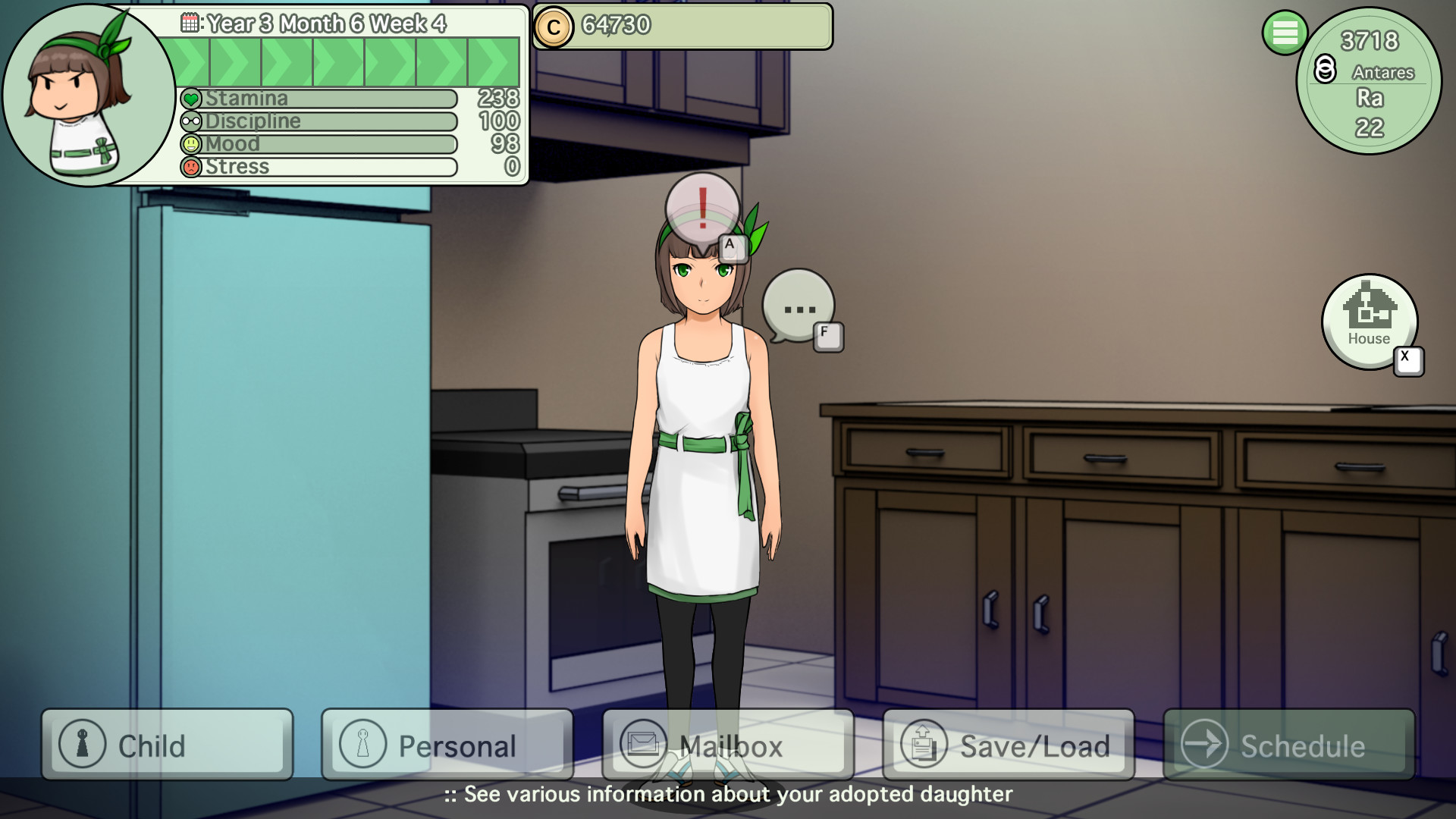 This is where Ciel’s greatest strengths come to light: the story. At first, everything was very quaint. You are going about each week, merrily engaging in the simple systems the game throws at you. You get to know the various inhabitants of Ark 3, all of which are interesting, well developed characters with well written, if occasionally stiff, dialogue. But this is the end of humanity. You are living on an Ark, and the Gigant can attack at any time – and it does. This threat is ever present, and as the game goes on, you see what desperation does to a species. Conscripting child soldiers, forcing the disabled into war and the finality of death. You as a parent have to console Ciel during these moments, all the while willingly exposing her to the horrors of it all. It tackles sensitive subjects with a surprising level of grace that almost keeps the whole game together. Almost. A lot of the truly interesting aspects of Ciel’s story come into play once you hit 10+ hours. That is a long time to play a game with weak, monotonous gameplay, and I would go as far as to say it might not be worth the slog.

Ciel Fledge has a charmingly simple artstyle. It has a very clean anime look, which gives the characters a warm aesthetic. During battles, exploration or map traversal, the game takes on an adorable chibi style which fits the overall feel of the games visual direction. The backgrounds are completely empty however. Noticeably absent of any animation, detail and even life. Whilst coming across lazy at first, it grew on me over time. It gave the impression that the streets of Ark 3 were empty, that there weren’t enough people left to truly inhabit such a large man made wonder. It subtly sold the idea that we were a species on the brink of annihilation. Intentional or not, this was a powerful, driving factor in the games overall narrative.

The sound design is equally as basic, with limited use of sound effects, lack of voice acting and an overuse of generic anime quips to display emotion during conversation. The music is mostly good, blending various genres and sounds together with surprising efficiency. A few tracks do get a bit grating, but it is a solid performance for the most part. 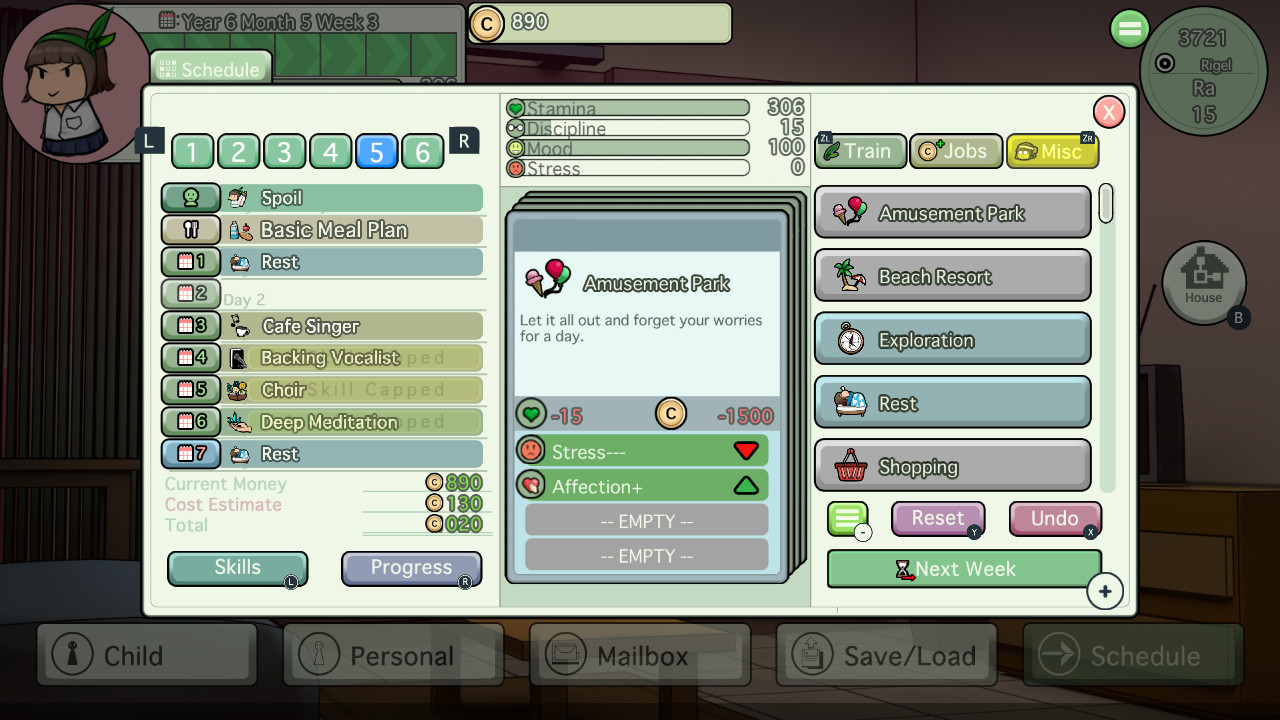 Ciel Fledge: Daughter Raising Simulator has a story, and tackles themes, worth experiencing, whilst existing in a game that is not really worth playing. The core game has a serious case of ludonarrative dissonance that goes out of the way to lance any emerging immersion. Combined with an utterly tedious cycle of monotony, and I can safely say that you should probably leave Ciel on the surface of earth for the Gigant to snack on, whilst you do something else.

Ciel Fledge: Daughter Raising Simulator can be bought for PC via Steam or on the Nintendo Switch store. You can also buy it on Humble Bundle for PC. Or if this isn’t one for you, how about checking out one of the other PQube games?

Thank you to PQube Games for providing a review copy of the game.

Forged in the rainy wilds of northern England, I carved a path of mediocrity through generations and genres. My play style is often described as: “optimistically awful”.