LoveSick Darlings is an Original English Language visual novel (OELVN) by an author called Dimitri. It is not yet complete and at the time of writing, is currently on its way to being funded on Kickstarter. This is not a full review both based on totally completing a full version of the game, but a preview based on trying the fairly lengthy demo build. Please keep in mind that many things will be subject to change.

This story takes place in Foster Hills – a small city that exists a couple of hours travel away from Sydney, Australia. The story follows a teenager, also called Sydney, who used to live in the big city but somewhat recently moved to Foster Hills. Since moving, Sydney has started to fit in with a new group of friends at school and has a fairly normal teenage life – go to school, play video games and deal with the standard teenage drama.

I should note that unlike a lot of visual novels with high school stories, the characters actually are underage in this one. There are brief mentions of sexual activities but they tend to be important to the story and happen off-screen. The most ‘adult’ content visually is some cleavage. 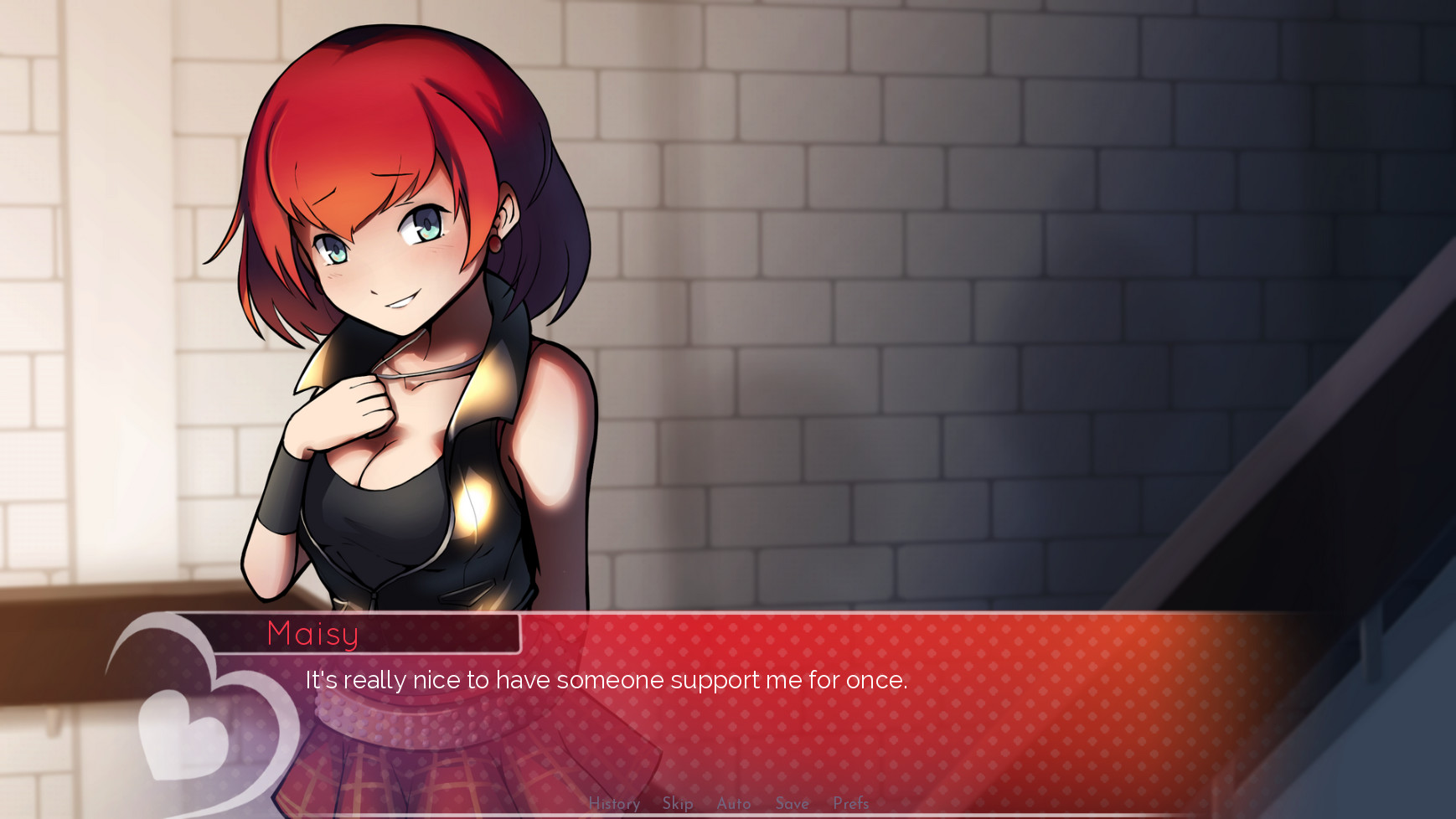 The story itself mostly focusses on the relationships between characters and how they deal with some fairly serious issues as well as the standard ‘x’ likes ‘y’ who likes ‘z’. I’ll keep this brief to avoid spoilers, but it involves topics such as one of the group members getting an older boyfriend, dealing with a lack of self-worth and family issues. Unlike a lot of visual novels, it deals with rather realistic situations.

I found the writing to be fairly convincing. I could imagine people I knew at that age acting in similar ways and dealing with similar problems. I liked a lot of the character interaction too. There was a nice mix of dramatic situations and light-hearted moments between characters. Note that there is a slight sprinkling of Australian slang, but it’s all understandable by context.

Aside from the main character, there are five characters within the group of friends. Maisy, Jayda, and Steph are the heroines of the game who you can try to get closer too. Stuart and Grace play more of a background role. 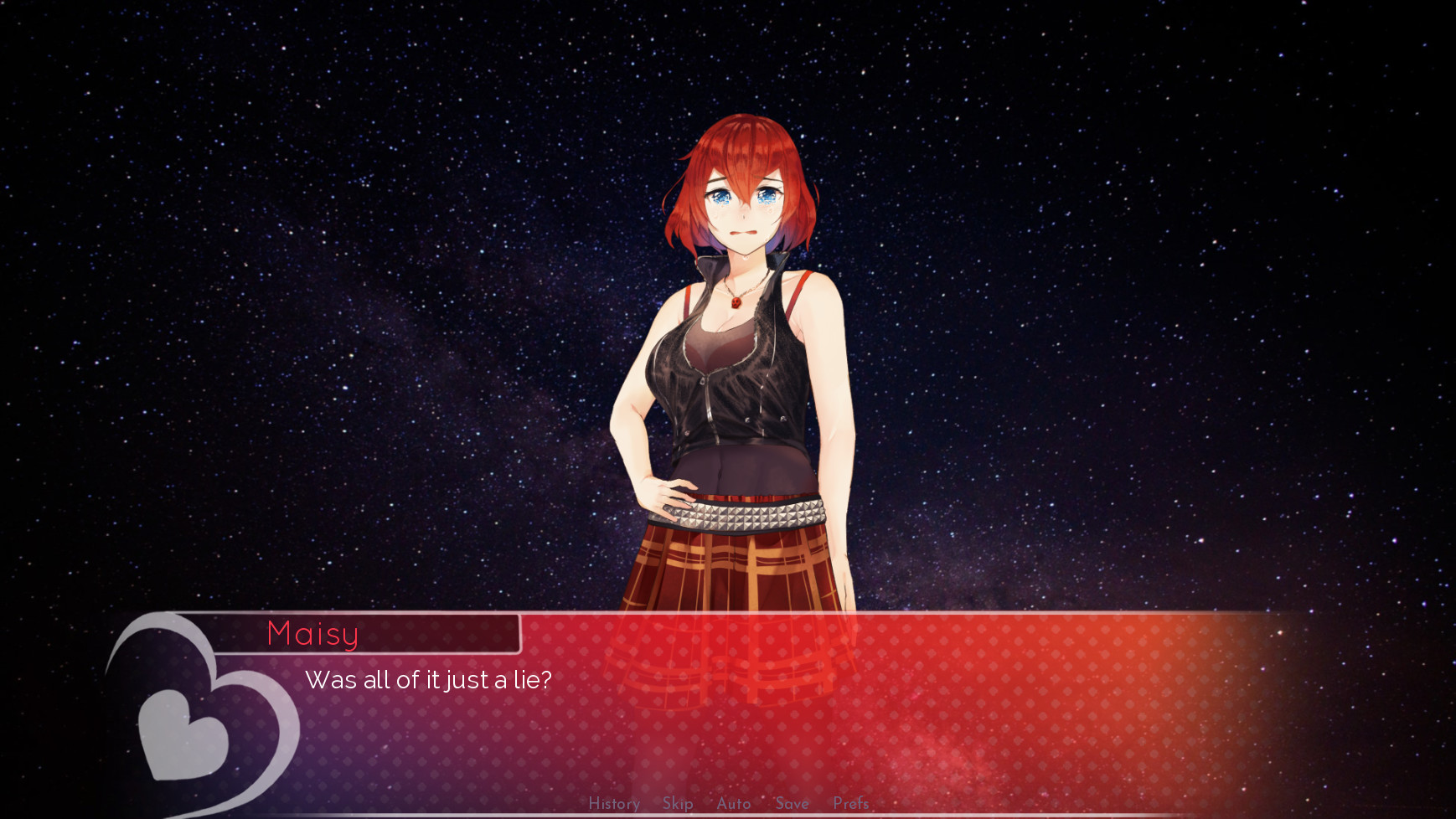 Maisy is essentially the catalyst for the story and the girl who the main part of the story focuses on. She’s very outgoing and quite an open person. That said, she can be quick to anger.

Jayda is a bit too obsessed with video games and is described as quite an honest person. She sometimes borrows games from the main character and chats about gaming and anime with him. Along with Stuart and Grace, she participates in the art extracurricular. She’s my personal favorite of the three.

Steph is set out right at the start as the main character’s initial crush. She’s described as an opinionated hipster girl and doesn’t seem quite as close to the group as some of the others. She loves reading books.

I thought that all of the characters who got major screentime were interesting in their own way. I would like to see some more of some of the background characters too. 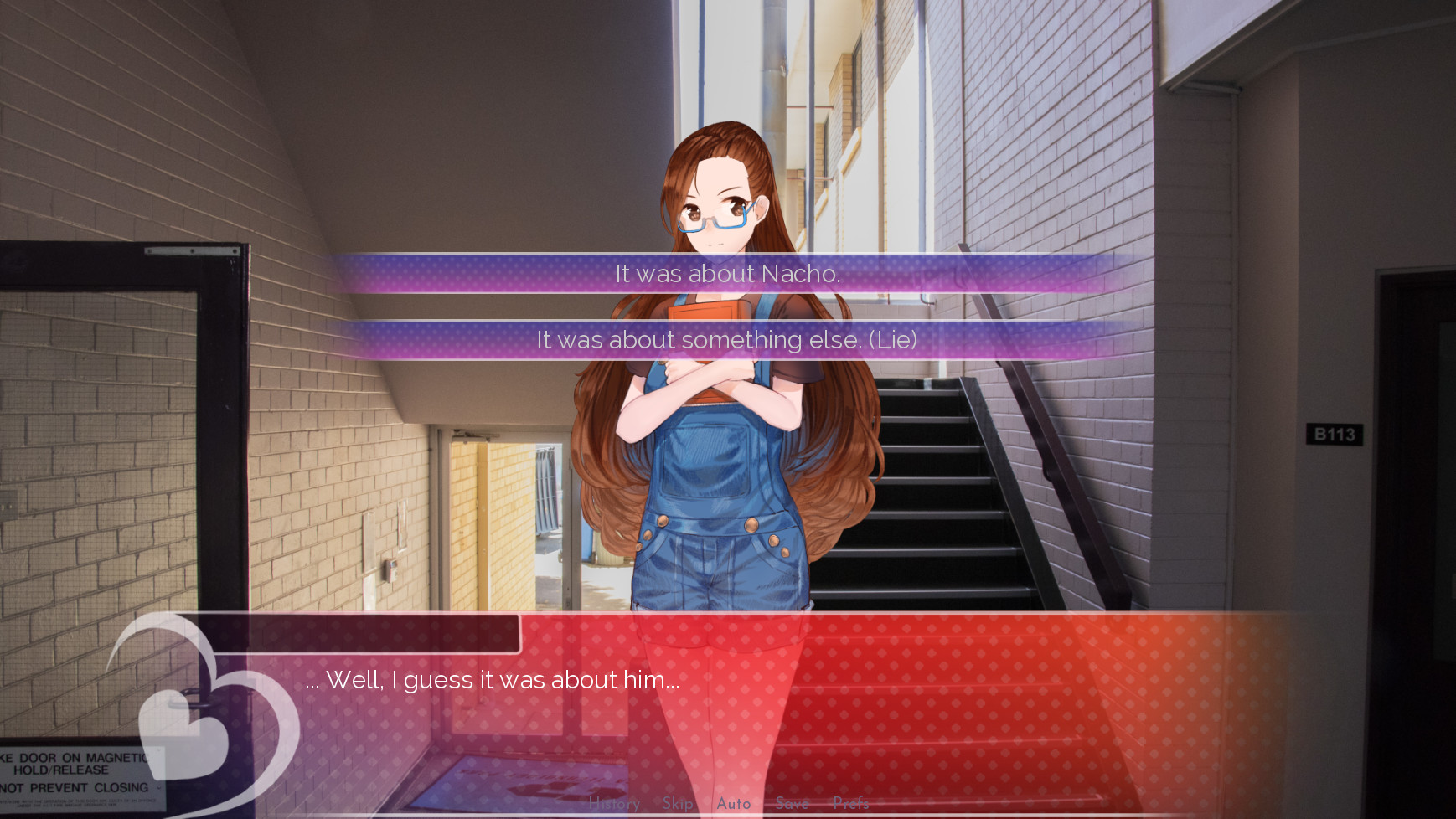 One feature I liked quite a lot was that scenes are designed to change based on player choices and there are some which are difficult to get. It’s not just a case of getting a certain amount of points for a character to get their route. I was particularly impressed when I saw that it goes to the point of one character being more distant if they see you becoming closer to another character that they think you like. You can also choose to spend time with certain characters or participate in hobbies that bring you closer to them too.

Choices happen quite often in this game and they do have a strong effect. This is something that I definitely see as a positive. While it may make the game shorter overall due to the need to write multiple versions of events, it will certainly add replayability. There is a review feature at the end so you can see hints of how you did and what certain characters think of you too, which is very useful for future playthroughs.

While talking about systems, I’ll note that options were fairly basic. Everything needed, but nothing special to note. An incredibly minor complaint is that I did keep trying to use a mouse wheel up to access history (as it is fairly standard) and it didn’t do anything. I’m unsure off-hand if that’s always the case in this engine.

The editing itself is well done, with very few occurrences of typos or grammatical errors that I noticed. Considering that this is certainly not finished yet, it’s quite promising as even higher budget visual novels tend to release the same way at best.

Graphics is where I start to get a bit more negative. I will give the disclaimer that it’s on Kickstarter and a big part of that budget is allocated to art, so these points may change.

I found the sprites and the CGs to be quite good for an OELVN. They’re not to the point of a well-funded Japanese visual novel studio, but still quite good. That said, they feel quite different in style to me. It’s a bit strange sometimes to see the character sprite, then a very different looking CG.

The backgrounds are the biggest issue for me with graphics. They’re photos. Sometimes it kind of looks good – sometimes it doesn’t at all. Worst are the ones with humans in the background, as the contrast with the anime-style characters is too strong.

The music I liked for the most part and felt fit well enough. That said, there are plans for a full new OST so it’s fairly irrelevant. There is currently no voice acting, but there may be some limited voiced lines depending on stretch goals. Examples of the voices can be found in the trailer.

I would recommend taking the chance and backing LoveSick Darlings on Kickstarter in the current state. That said, I would suggest that you don’t just take my word for it but download the demo and see what you think of it. It’s not really your standard visual novel, both with less Japanese influences and more dating simulator style aspects. It is something that I personally enjoyed and the few negative points are likely to be improved with funding.

Under One Wing – Review

Under One Wing explores the concept of a world where there was a huge surplus of airplanes after the war. So many in fact, that they were repurposed for civilian use and have become common enough that even students can afford to buy them with a part-time job and some saving. This is a world […]