Wrath: Aeon of Ruin (currently being developed by KillPixel and published 3D Realms and 1C entertainment) is an old-school styled FPS game. Its main goal appears to be to resemble old games from the golden era of DOOM, Quake, and Half-Life.

The game manages to replicate the same feeling as the classics (especially because it was made in the same engine as Quake) while still bringing aspects and mechanics from recent times. It is still both recently released and in early access, which means that some of the points explored in this review might become invalid in the future. 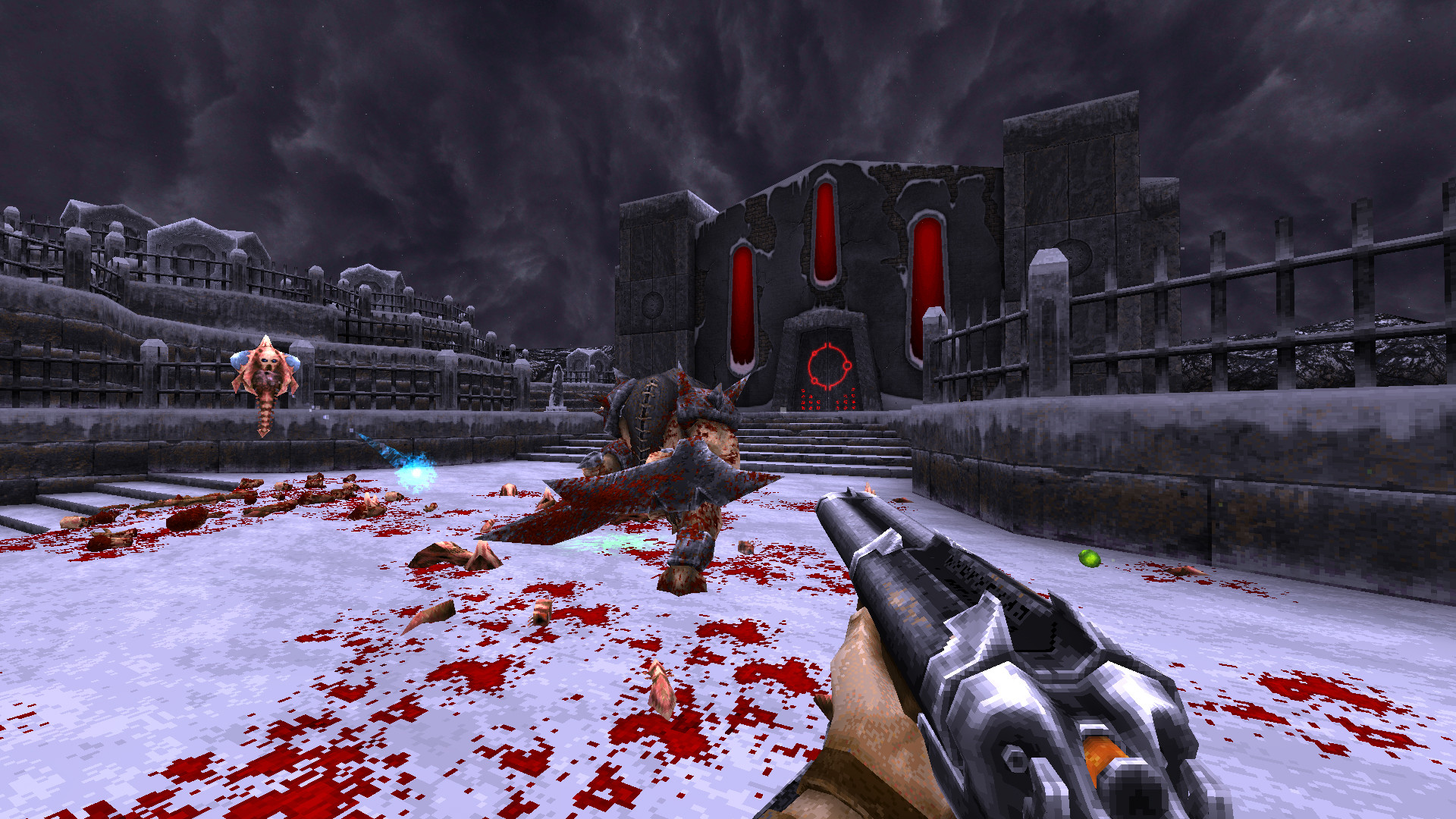 Running around the map feels great, as it’s fast and gives you full control over movement, just like Quake. The only negative side is the inability to bunnyhop, which is replaced by a special attack with the melee weapon that launches the player forwards when charged.

Movement is only so satisfying because the big, spacious maps allow you to run around without having to worry about bumping into something, both in open and closed areas, so linearity isn’t sacrificed in order to have a lot of room to dodge projectiles and enemies. Levels and regions are also very diverse, as no area feels repetitive, all having their own unique composition and intended difficulty. Some being harder, others easier, some linear, others in an open space, the game never exhausts the player with the same format of combat and level design.

There are instances in which you can find yourself in a vast cemetery, other times inside the ruins of a castle, sometimes in an underground fortress, or in an ancient abandoned cave (and all of that is only in two levels), each time bringing combat into a different perspective. For example, in a more confined setting, the player is often forced to seek cover and stay behind walls before attacking, while in an environment with ample space, dodging and running are prioritized. In this sense, enemies also obtain a new meaning. When in an open area, the player is encouraged to circle around their foes to avoid damage, while in an enclosed location, they’re forced to keep a distance. 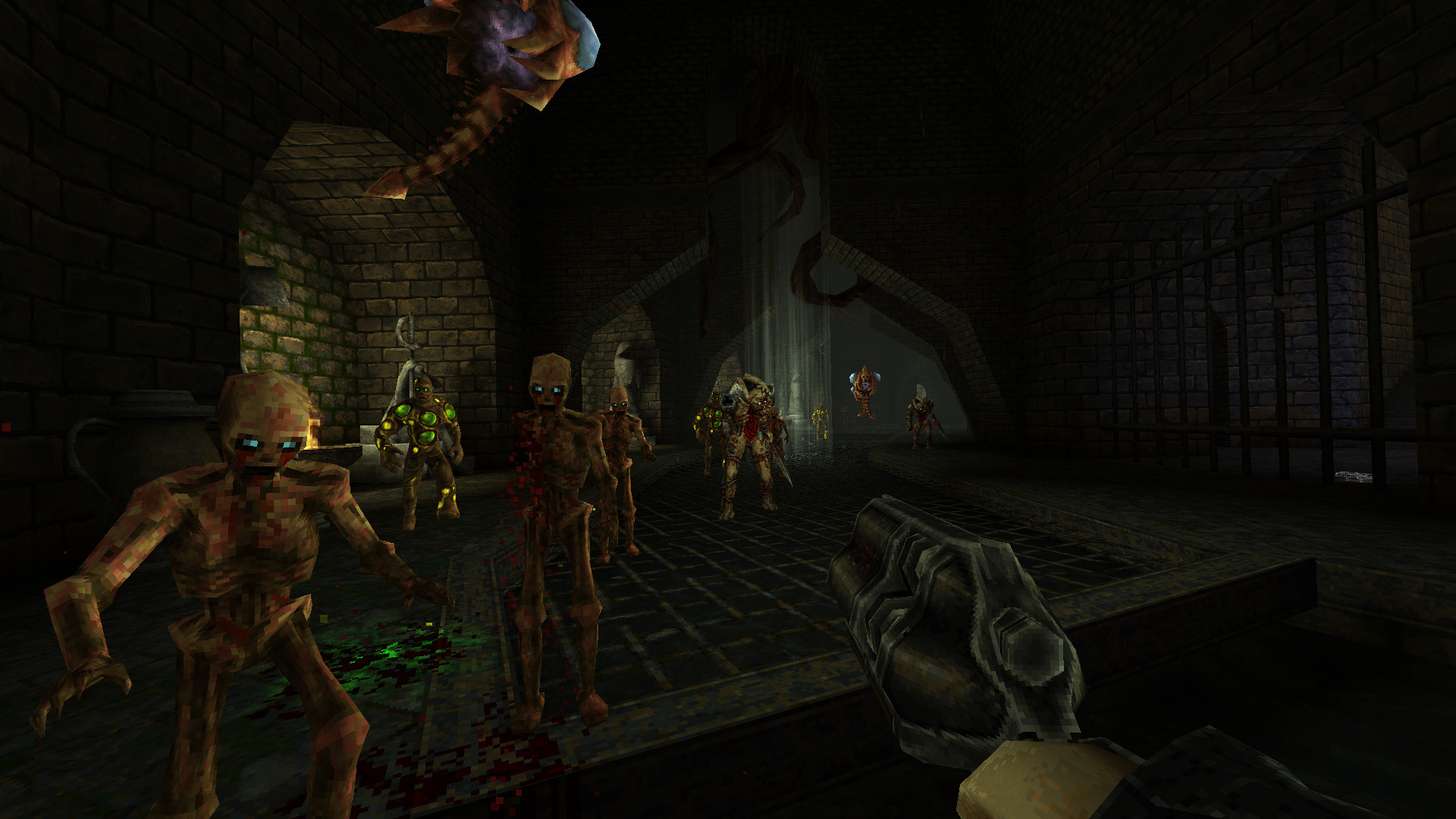 WRATH: Aeon of Ruin has an interesting collection of monsters, all of them resembling (but not too much, probably for legal reasons) enemies from the old classics, such as flying orb-like monsters that shoot fireballs at you, similar to cacodemons from DOOM, or smaller flying monsters that shoot BLUE fireballs at you (wow, so creative!), bringing to mind Scrags from Quake.

The simplest creatures (that bear resemblance to Unwillings, from DOOM) are weak and slow, not presenting much of a challenge when alone, but proving to be an annoyance when coupled with more powerful monsters. This is especially the case in enclosed maps, where they can block passages if not killed. Invaders present more of a challenge, carrying a hand cannon and being a bit stronger than weaklings. Two other fragile creatures (but not any safer) are goo-affected Unwilling-like monsters, that move slowly and throw explosive cysts, and Imp-like midgets that run at you full speed instead of maintaining a distance (though annoying, I find them hilarious for some reason. You just can’t take an enemy seriously when it awkwardly sprints in your direction like a toddler only to be blown into pieces by a two-barreled shotgun). There are three bigger, sturdier enemies: the cacodemon-like creature mentioned before, a huge and slow cyst-throwing disgusting monster that can only be described as a zombie Boba Fett and a massive monster with bayonets for hands that runs at you full speed. Unlike the imps, this one is not funny at all, but very, very menacing.

The only problem I found while playing the game was a bug that sometimes happened when enemies were chasing me, making them get stuck around corners and on top of entrances. This does not, however, affect the experience in any major way, since it only happened a few times and, actually, kind of helped me when I was in a tight spot. 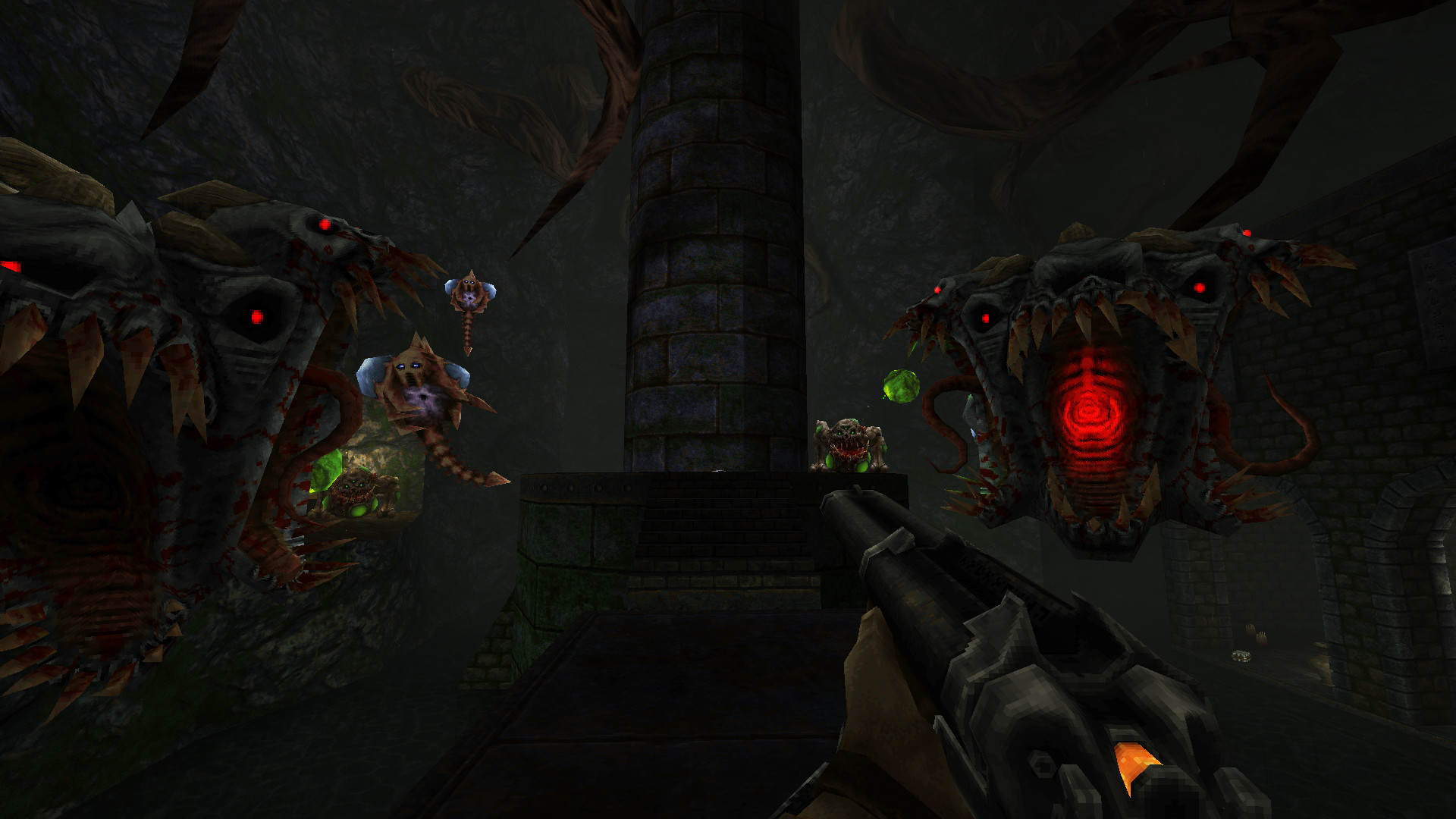 The vast amount of enemies and the size of the maps is well balanced with the quantity of pickups and special items accessible. Health vials are plentiful and often available when needed, but not so much that it lightens the penalty of receiving damage. The same goes for ammo: there is not enough to make the player ignore ammo management, but a sufficient amount for it not to become a major concern. The abundance of items makes gameplay interesting, as it allows nonchalance with resources and items when in battles.

Aeon of Ruin currently has four different usable items. Cruel Aegis grants temporary invincibility in exchange for having the player’s health reduced to 10. Life Siphon lasts for 20 seconds and heals 5hp for each kill. Drowner’s Apparatus (by far the most useless) is used to breathe underwater for a long period of time, which is only very occasionally useful, as you’re very rarely presented with a situation in which drowning is a threat. The most interesting and innovative item, however, is the Soul Tether, which is, in itself, a new mechanic entirely. Instead of using the classic slot save system present in most of the old-school games, WRATH: Aeon of Ruin has collectible items specifically for saving your progress. These items are consumed once you’ve used them. A lot of Soul Tether pickups are scattered throughout the maps, making it hard to end up with no way to save, but their consumable nature forces the player to think about when to record progress and prevents abuse of manual saves. 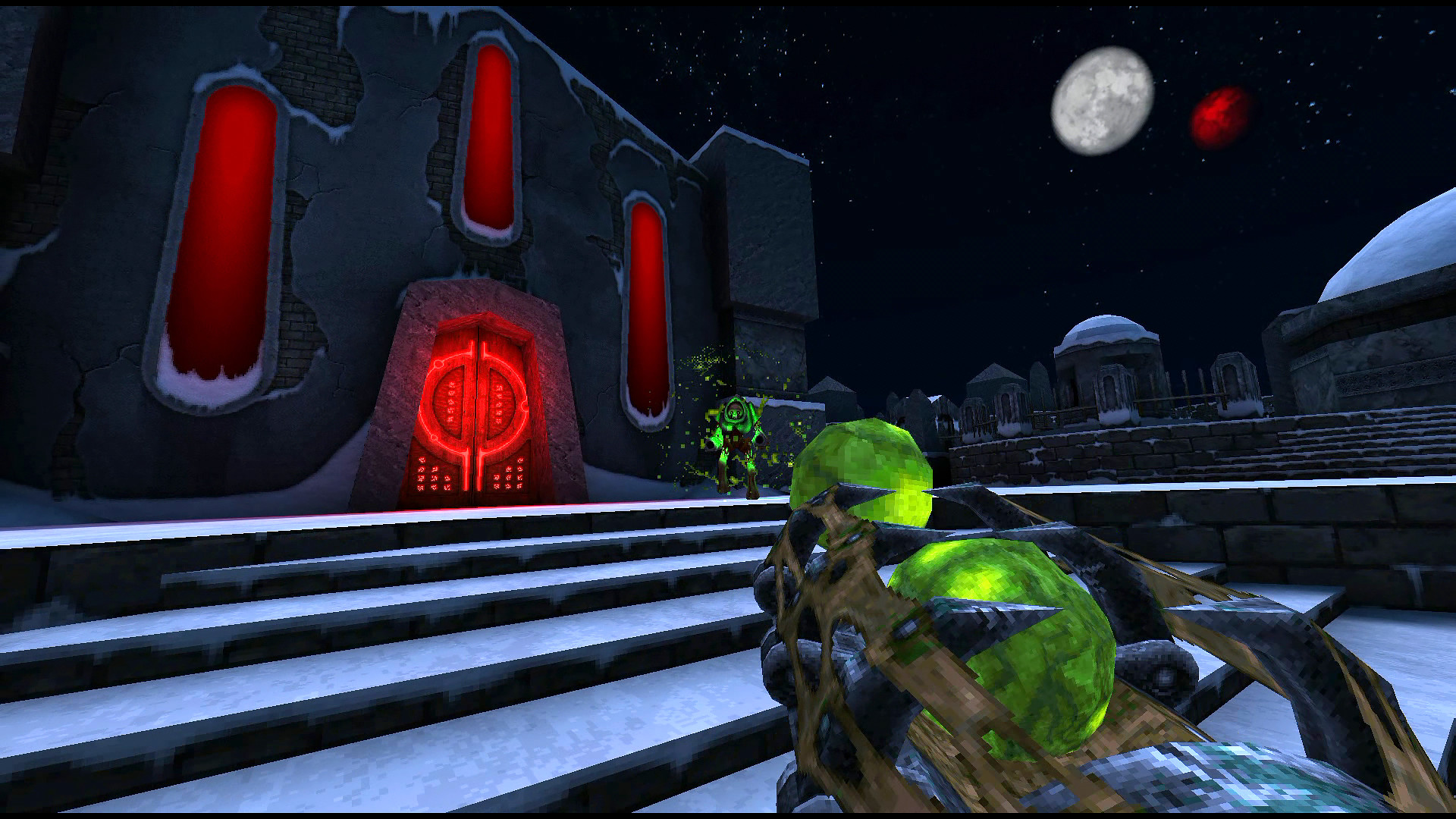 The game has six different weapons, all of them with their own specialty and unique abilities. The Ruination Blade is a melee weapon (duh) equipped on your hand. Its normal attack is weak, but M2 charges a strike that both launches the player forwards and does more damage. It feels especially satisfying attacking a line of enemies with this ability and hearing the “blosh, blosh, blosh” of blood and guts as you slash through them. The Coach Gun is a pistol that does medium damage and is mostly used to finish already damaged enemies. M1 fires a normal, rather weak, bullet and holding M2 releases a considerably more powerful shot. It’s still a very occasionally used weapon, as most pistols from old FPS are. The Shotgun, however… aaahhh, the Shotgun… Well, what can I say? It is exactly what it’s expected to be: powerful, aggressive and heavenly satisfying. You’re going to be using this bad boy most of the time to obliterate monsters in a gory explosion of blood and viscera. It does absurd damage up close (killing bootleg cacodemons in only two shots) and is surprisingly decent from a medium distance. This is, by far, the most important and useful weapon, just like in most old games, it’s basically the main gun, with a normal M1 shot and a special M2 charge that releases ricocheting pellets. Congrats, devs, you got the most crucial part right. The Fang Spitter, well, spits fangs. It works as a DPS machine gun with two firing modes: automatic (M1) and a slower fire rate that shoots two fangs at once (M2). It’s a gory piece of equipment by nature, with the fact that it literally shoots teeth and is covered with blood, with a fleshy appearance in some parts of the weapon. Another disgusting gun is The Retcher, an explosive cyst thrower (M1 fires bouncing cysts and M2, a series of bombs that explode in contact with anything) that has a living, meaty and pudgy look. It’s first acquired when killing your first huge toxic monster, as it’s part of its body (uuuggghhh…). Everything about this weapon is gruesome. Even the sound it does when selecting the weapon is repugnant, with an awful noise of stepping on broken bones and intestines (I am ashamed to admit it is quite satisfying though). 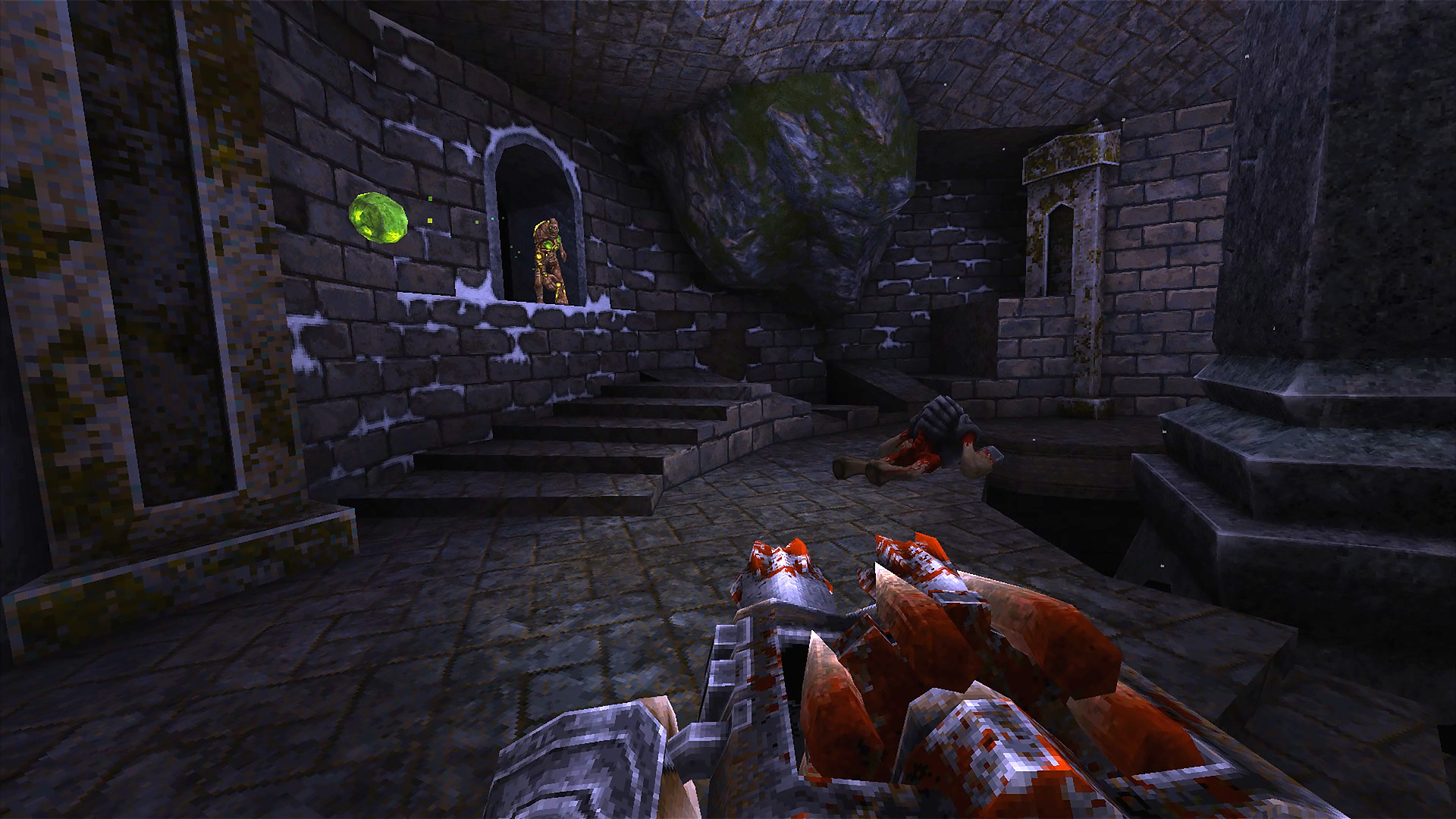 Staying on the topic of gory visuals and sound design, it’s safe to say this is a big part of the game alongside the archaic look: antique walls that recall an ancient world are now painted in blood and innards. The aged halls of a better time are infested with hideous creatures, and only an equally nasty set of weapons can defeat them. Monsters have their flesh exposed, interlaced with bones and bodily fluids. You’d think that eliminating these creatures would clean the place, but putting an end to their miserable lives almost always results in some form of dismemberment or explosion, along with having the player’s face bathed in their juices when too close. This is even better with the retro graphics that, other than obviously resembling old-school titles, give a more crude, rough appearance to the gore.

The sound is amazing. All weapons sound beefy and heavy, and obliterating enemies plays a meaty, “bloshy” sound, making each kill trigger a dopamine fest in your brain

Story-wise, the game is really vague and only goes a far as giving a very small amount of context: “You are Outlander. Once adrift upon the Ageless Sea, you now find yourself on the shores of a dying world. From the consuming darkness emerges a figure cloaked in white, the Shepherd of Wayward Souls, who burdens you with the task of hunting down the remaining Guardians of the Old World.” The “Decaying World” and “Ageless Sea” are never really explained much. It’s very interesting because the setting and context make you wonder about WRATH: Aeon of Ruin’s story and engage you in wanting to know more. 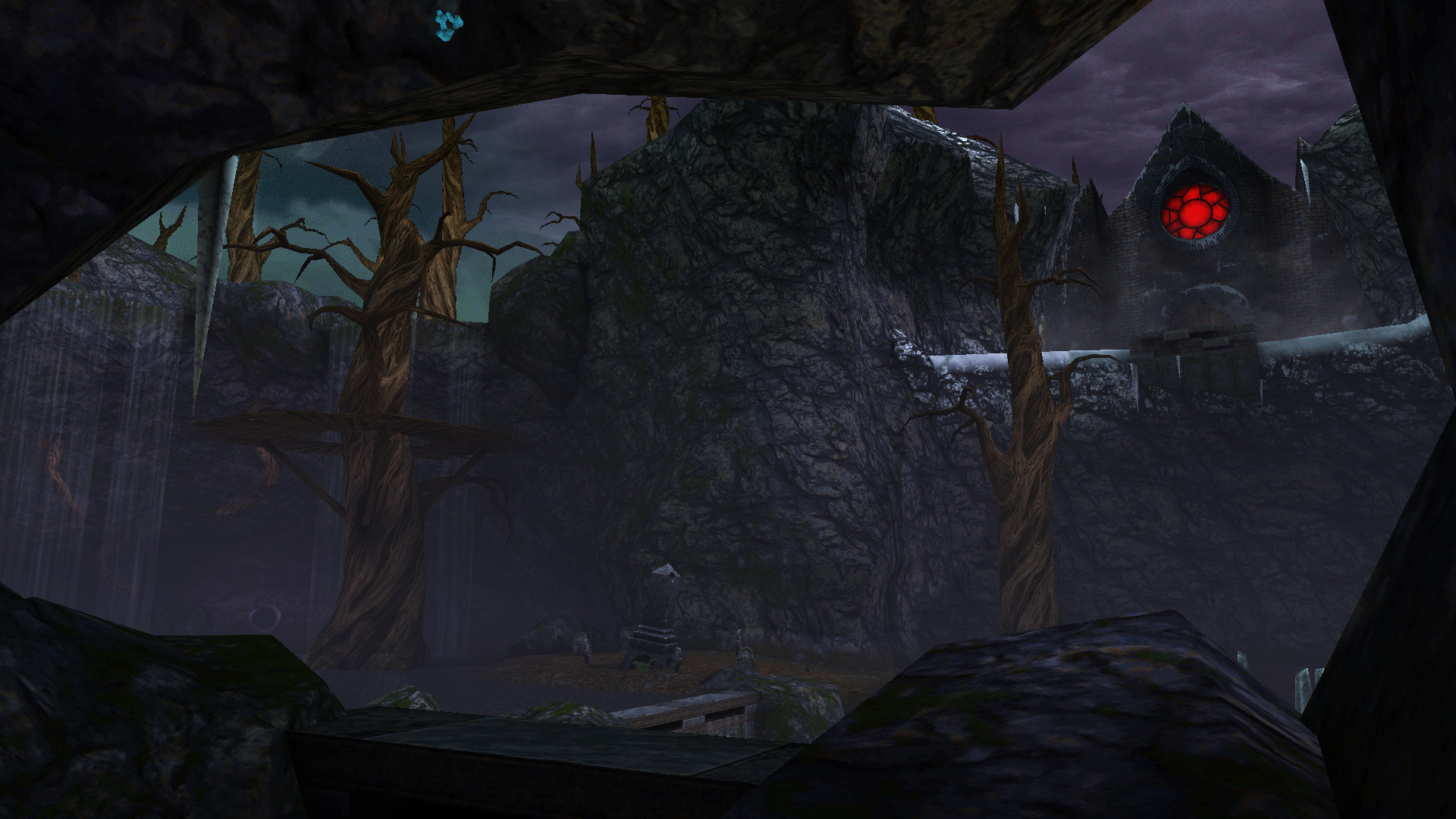 Overall, Aeon of Ruin does what it sets out to do very well: mixing gameplay from old classic shooters with innovative mechanics in an exciting new title that leaves you wanting more after completing its first two demo levels. While still in early-access, the game promises to offer much more content in the future, with more weapons, maps, a multiplayer mode based on QuakeWorld netcode and a 4-player co-op.

I’m hopeful that the devs will finish this project and create an incredible experience, since that’s the only way this game seems to be heading.

The game can be bought digitally on Steam or here on Humble Bundle.

Thank you to 3D Realms for providing a review code for the game.