Senran Kagura Burst Re:newal is a 3D hack and slash game, where you play as a variety of (mostly absurdly busty) ninja girls. Busty ninja girls whose clothes often get ripped off. Some readers may have already decided to buy or avoid this just from reading that. Read on though, as there is a solid game behind this concept. It’s not all about the jiggle physics.

This is a remake of Senran Kagura Burst, which was a 2D beat ‘em up for the 3DS. This is quite a change in the gameplay, but the story remains the same. 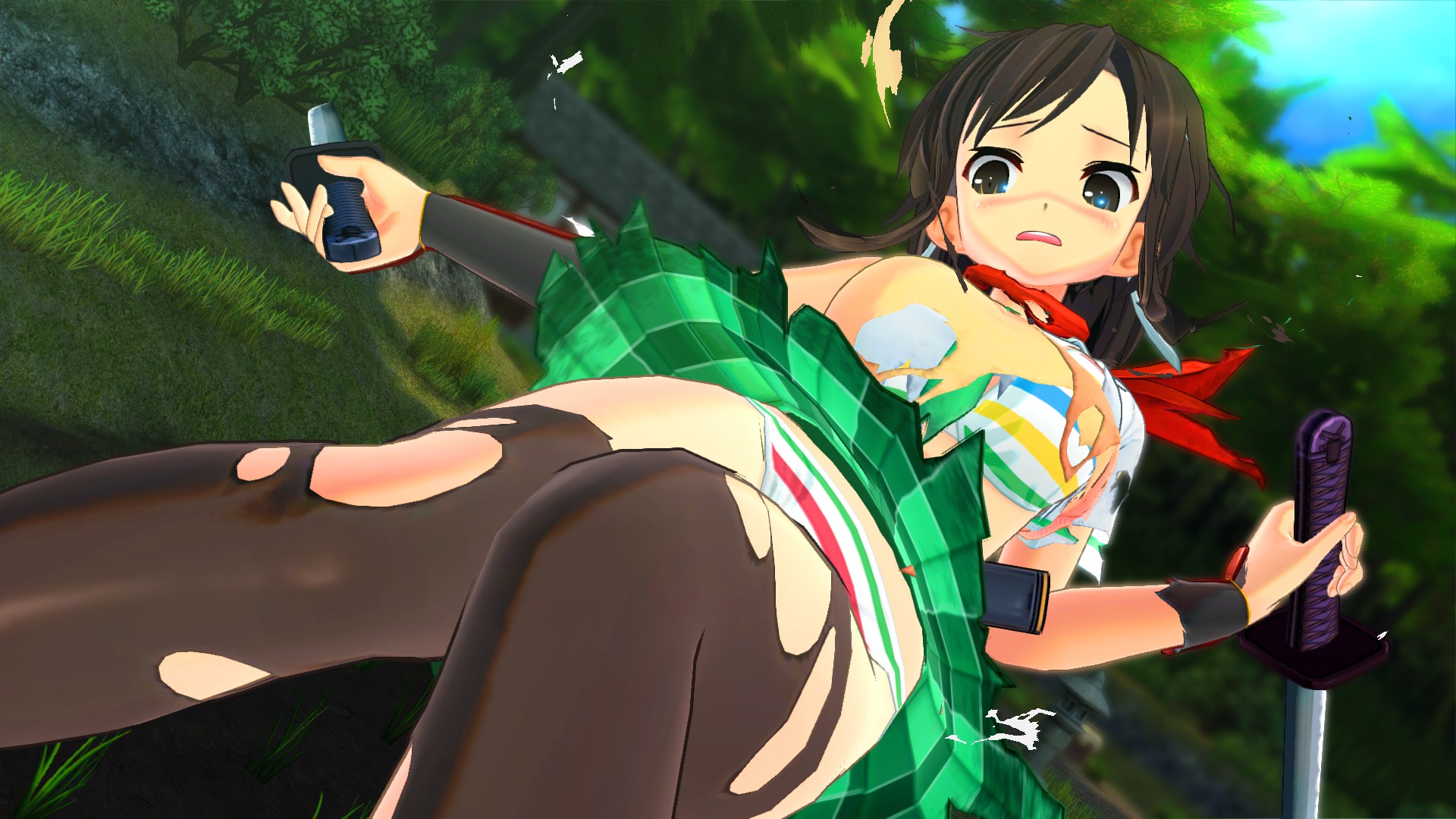 This game is available on the PC and PlayStation 4. I personally played on the PlayStation 4. Unfortunately, the game is censored on this platform, so I cannot give details of the removed ‘intimacy mode’. It is in the PC version and involves touching the characters.

In addition to the removal of intimacy mode for the PlayStation 4, the game uses the beam of light censoring where clothes come completely off. This isn’t an adult game, so it’s not unexpected. It’s still NSFW enough that I’ll link it here in case any readers are see this in public.

In this game, you play through a mix of 3D story scenes, visual novel style scenes, and missions where you fight against crowds of enemies, with the occasional fight against other ninja girls. 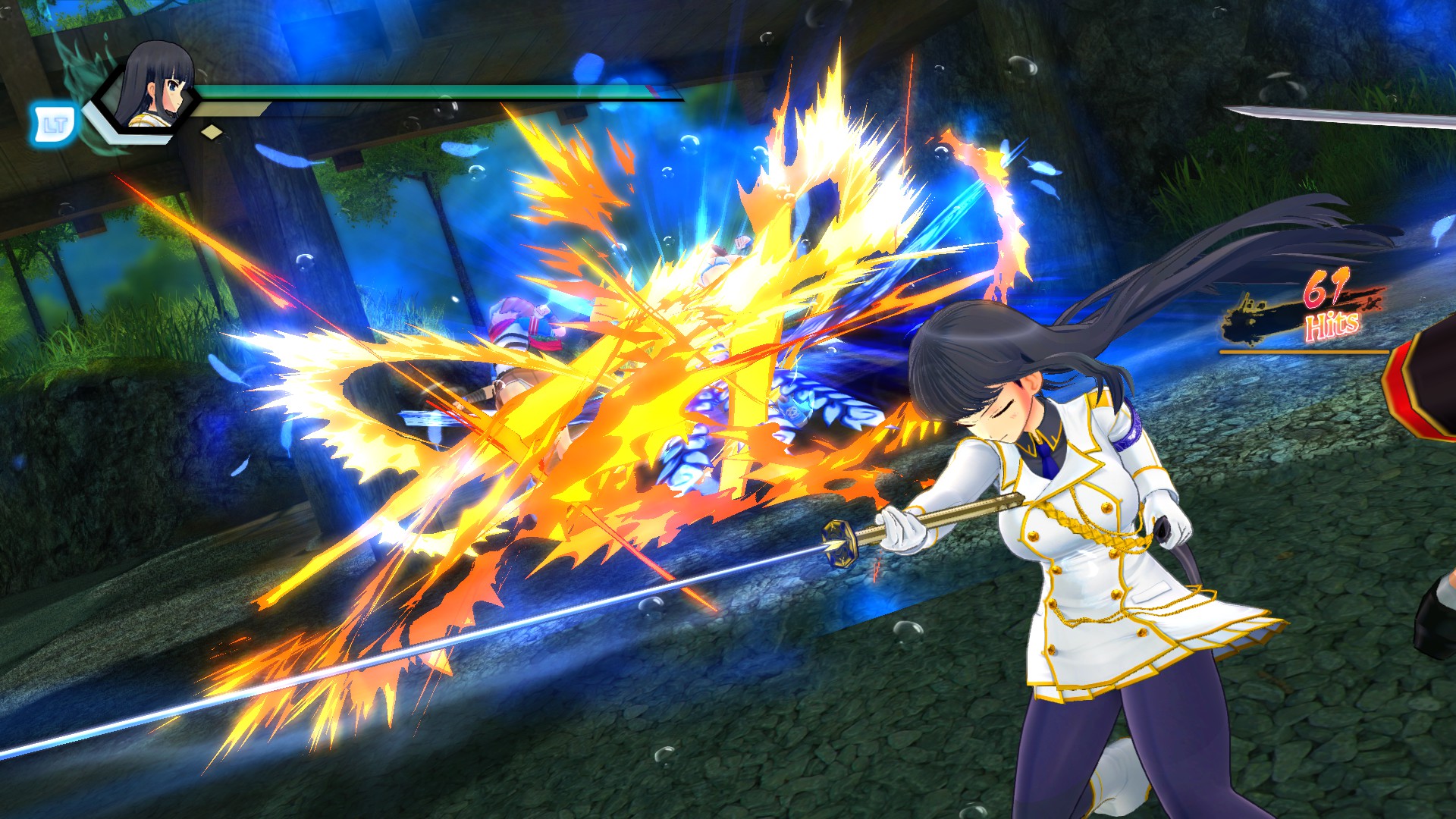 The story is mostly character-driven with the events being about the ninjas and delving into their pasts. There’s a lot of funny moments between the girls to keep the mood light and some events going on in the background to keep the story moving. However, the focus is really on learning about the characters. I didn’t really find the story events too interesting, but the character interactions and seeing into their past was done well. The concept as a whole is fun too.

Each story has 40+ episodes per story, as well as some side missions which are just the fight. An episode generally consists of at least one story scene and a mission. There are a good twenty hours of content here, but a lot of it is fairly similar to the rest, particularly in the missions.

I found the gameplay itself is very fun. You play as one of ten girls and beat up small crowds of enemies. I have seen some people compare this game to Dynasty Warriors, but the enemies are much tougher, while the area and amount of enemies are much smaller. Generally, you beat up a crowd, then either you will move on to another area or another crowd will appear.

You can choose to play from three difficulties. It is possible to replay missions which you have already completed too. 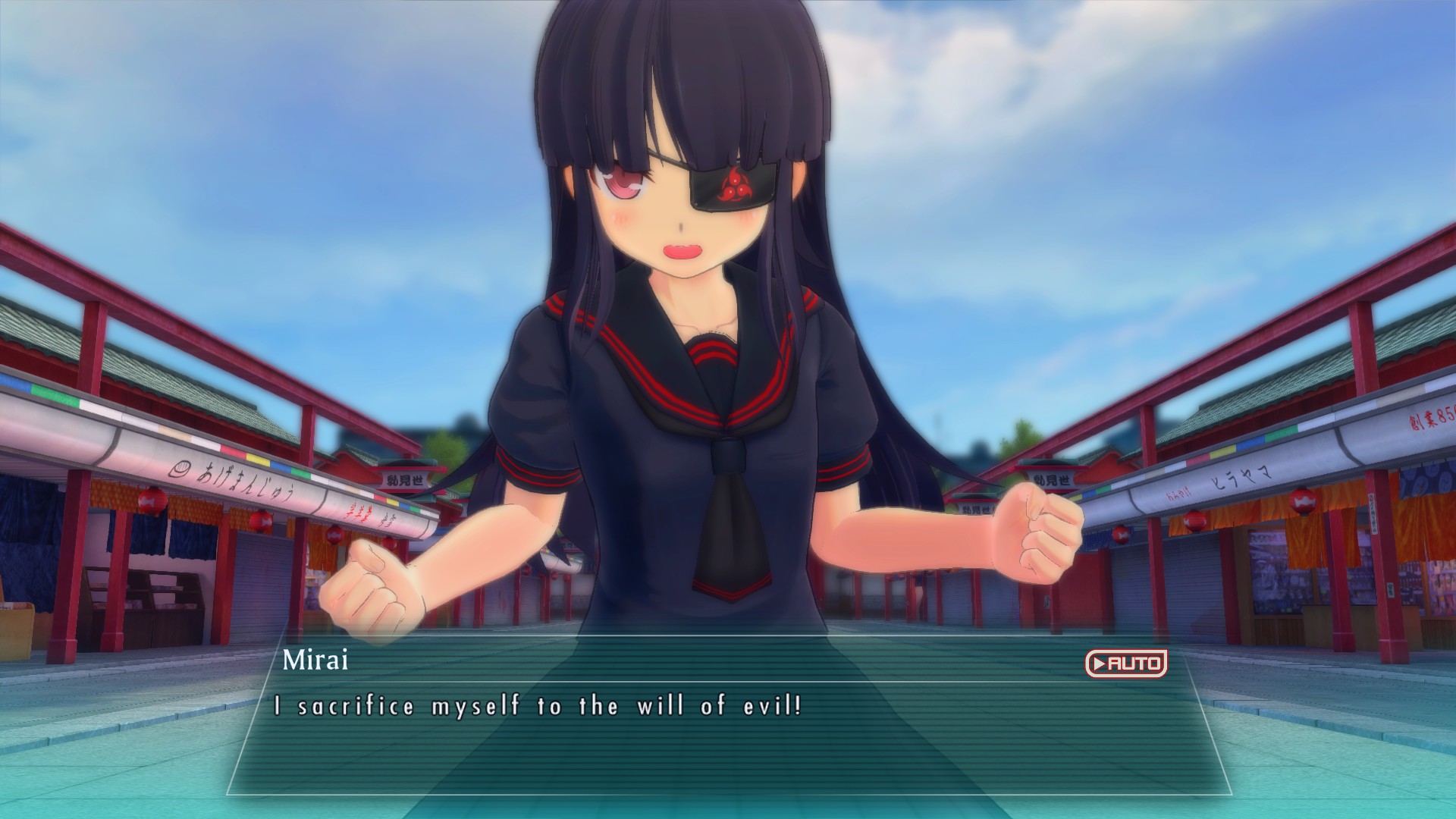 You will mostly be using combinations of light and heavy attacks to defeat the enemies. You can knock enemies airborne and juggle them too. This can lead to some fairly high combos. You can also jump and dash to move around and mix into your attacks. Blocking and parrying are included too and can be quite important. I felt like this all worked quite smoothly, though it took a bit of learning each character’s attack pattern before it flowed well.

Each character plays generally the same, but they all have their own unique fighting style. This even counts for the characters who seem like they might be similar, such as two who use an umbrella as a weapon. One is a ranged fighter with a machine gun under her dress, while one is a melee fighter with squid-based attacks.

The transformation feature has your character do a classic anime transformation sequence in the middle of battle, complete with disappearing and reappearing clothes. It increases your power and also heals you. This means that deciding when to transform can affect the battle quite a lot. Some may decide to transform as soon as they can and some may try and hold out until later.

You can also choose to do missions in Frantic mode. This allows you to rip off your characters clothes at the beginning of the mission and act as a glass cannon. Your attack is much higher but your defense is much lower. If you can dodge and parry well it can work very well for you, but it’s easy to get caught in a combo or two and die. Personally, I found it fun to do this sometimes to increase the pace of levels and add a bit more danger. 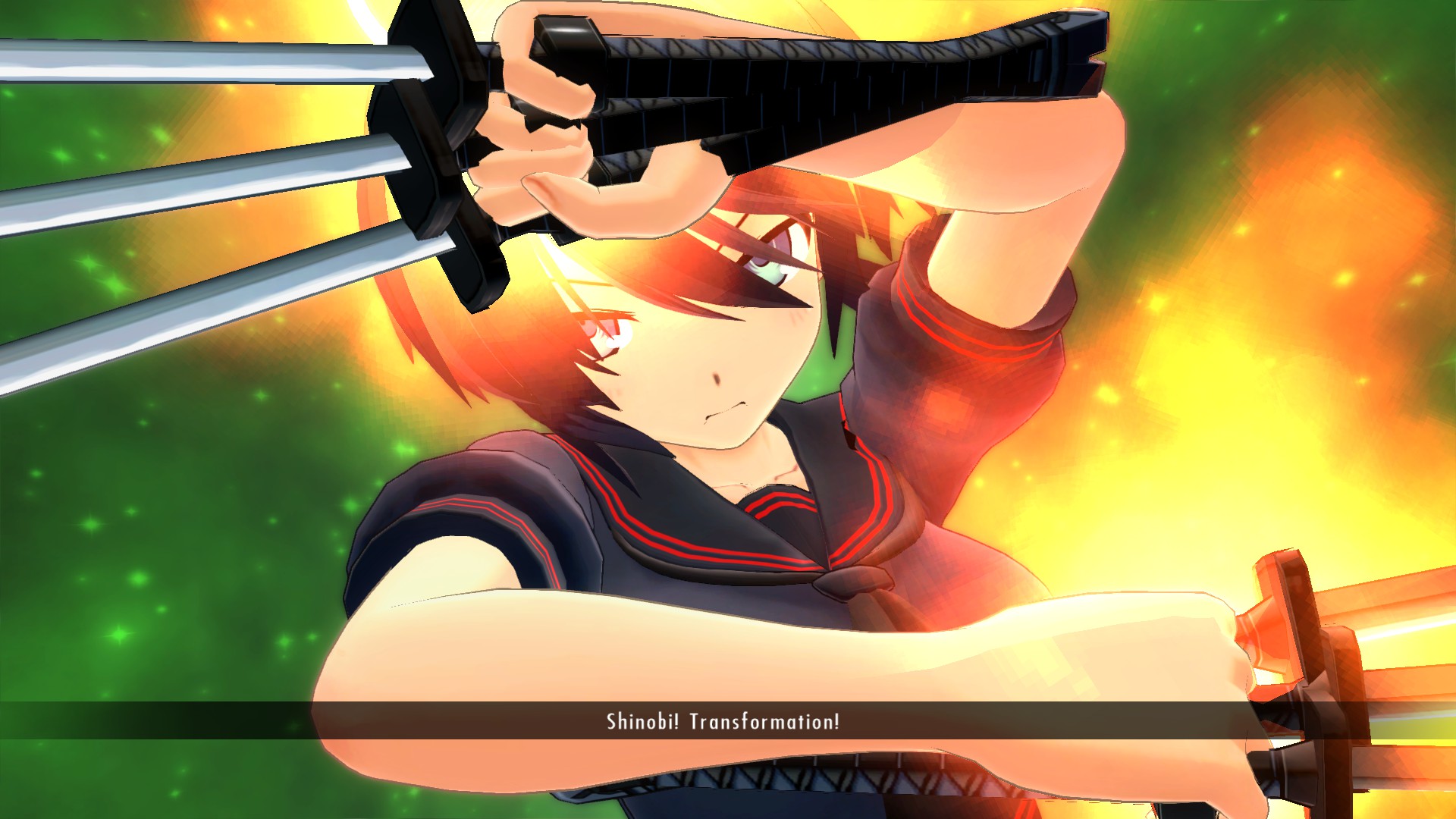 After you complete the mission, you will get experience and potentially level up. This allows you to increase the statistics of the character you were playing as. Unrelated to the experience for your level, you can also unlock new abilities as you play. These are things such as not taking damage while dashing. There are separate abilities for normal play and frantic mode play, so playing in only one mode, then switching later in the game can leave you underpowered.

As well as experiencing and abilities, you will receive a rank and some money at the end of a level. The money can be spent on customization items as well as images and music to view and listen to in the library.

Unfortunately, unlike some of the other Senran Kagura games, there is no multiplayer mode in this title. 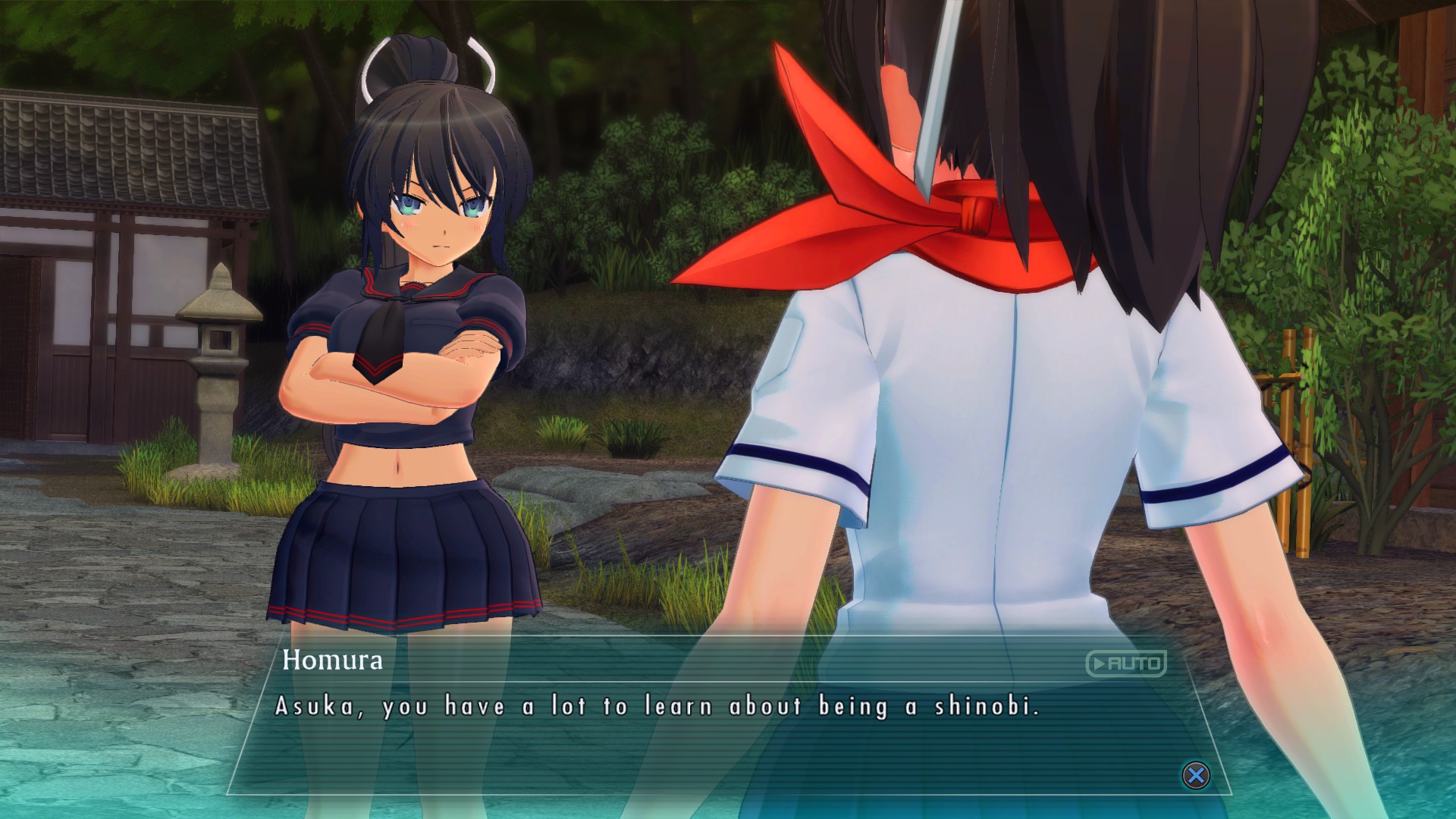 The customization is a strong point of Senran Kagura Burst Re:newal. In the school area, you have a dressing room where you can choose to change characters outfits, hairstyles, hair colors, skin tones, accessories, and underwear. The majority of these have five color variants too. You can set customization up for both pre and post-transformed forms.

You start with several customization items, but you can buy more with the coins earned from missions. There is some paid DLC for those who want more. The paid DLC seems a little pricey for cosmetic DLC to me, but it’s good to have the option rather than nothing. There is also some free cosmetic DLC, which is always appreciated. There is enough in the base game, that it never feels too necessary either way.

If you like seeing the girls close up and taking screenshots, there is a diorama mode where you can make them pose and change their expressions. There is DLC for some extra poses too.

Customization is not just for missions. If you choose to make a character into a pink haired catgirl who only wears a bath towel or an elegant lady wearing a yukata, it will show in all of the 3D story scenes too.

In short, the customization aspect of this game is extensive and implemented incredibly well.

Going back to the topic of DLC, it is worth mentioning that there is some paid DLC for extra characters and story. 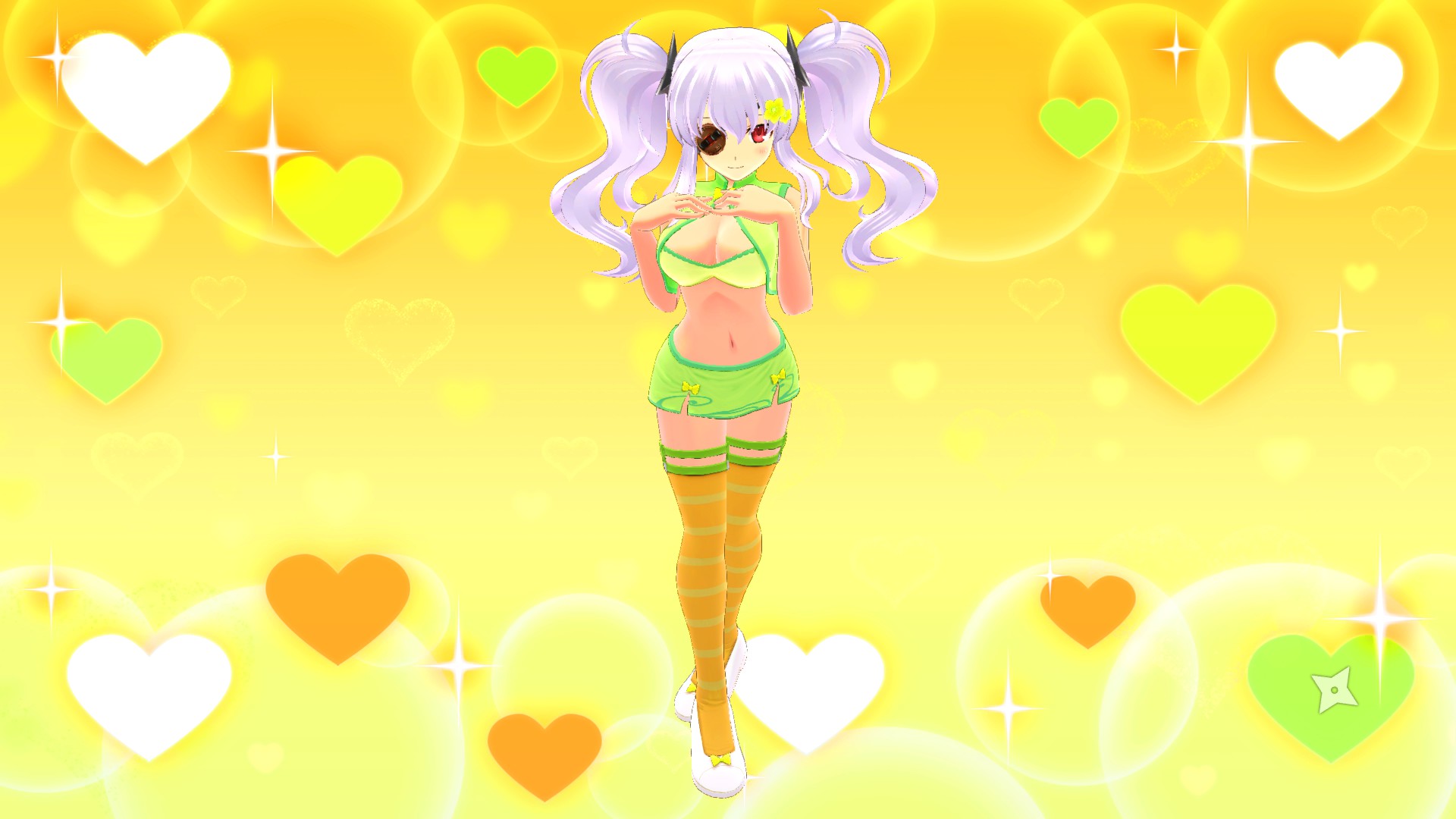 Graphically, the game is nice, bright and colorful. The anime art style is done well and the attack animations flow together nicely. The characters and backgrounds generally look good, though there are a couple of background assets which could have been improved. The aspect ratio of the visual novel scenes is also slightly off. I expect this is due to them originally being from the 3DS which is a different resolution than the PlayStation 4 or most PC monitors.

The background music works well and the sound effects are done well. The entire game is voiced in Japanese and the voice acting is done well.

Senran Kagura Burst Re:newal feels like a genuinely fun hack and slash game, which will get overlooked by many people due to the sexual aspects of the game. Of course, this will also attract many people who would not have played it otherwise too.

It does feel like the DLC is overdone, but the base game has enough content that it never feels needed. The game costs about $40, which feels like a fair price for the amount of time played and quality of gameplay. If the cost is a bit much, there is Senran Kagura Shinovi Versus at a lower price, which follows this in the storyline, even if it’s an older game. That said, I feel like Burst Re:newal is the better game.

The star of this game is the gameplay, but the cute characters, the humor and fun interactions between them add to it. As long as you don’t mind clothing coming off mid-battle, I’d recommend playing this game.

You can buy the game on Steam, on the PlayStation Store or physically at a local retailer.

Many thanks to Marvelous Games for the review code.

All Games All Posts Anime Racing

I’d say to rev your engines, but there aren’t any in this rather odd take on a kart racer. Gensou Skydrift is a Touhou themed racing game, where instead of driving karts, characters take turns standing on one another and fly over the ground. This game is currently available for the PC (Steam) and Nintendo […]