Hello, Goodbye is a visual novel by developer Lump of Sugar, which follows a young military officer from the intelligence division who has been assigned the name ‘Kaito Toubu’ for this mission.

This is a spy story, a romance story, and a comedy all in one, with a dash of science fiction and a sprinkling of sexual content.

If you are buying this game on Steam, a lot of the mature content has been cut out. A free 18+ patch can restore this. This can be found at the NekoNyanSoft store. The content itself is, for the most part, fairly standard with several sex scenes per character. By default the sexual content is uncensored but there is an inbuilt option to add mosaics if this is preferred.

The story opens with your arrival in special district Morino. A demilitarised zone between the UPJ in the south and the Commonwealth in the north. In this world, Japan split into these two countries a hundred years ago, with Morino between. Your orders are unusual. You are to pretend to be a regular student and await further orders. 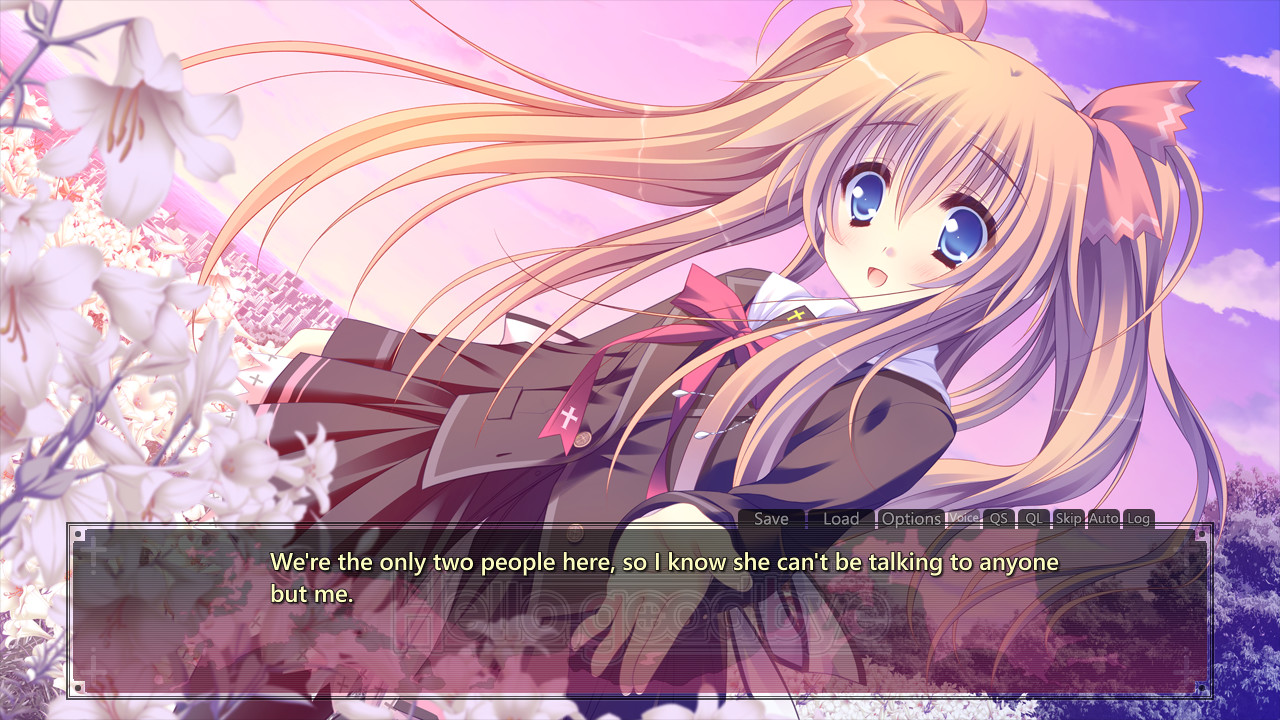 You encounter a girl in a field of flowers and accidentally let slip that Kaito is not your real name. With this, the story opens.

You end up meeting several more girls. One who claims to be a childhood friend, one who follows your around and another who claims to be your sister. Considering that Kaito is meant to be a false identity, this is an unexpected issue in his plans to blend in.

Events happen in the background, both at the school, between the characters and political events in the background. This culminates about two hours into the story with what is at the time a rather confusing twist. This ends the prologue. The structure of the story is quite odd, but it is with purpose.

After the prologue, the story soon starts to branch based on the choices you make. After you start making choices, you are quickly onto a route. It only takes one or two choices to decide which direction you are going. 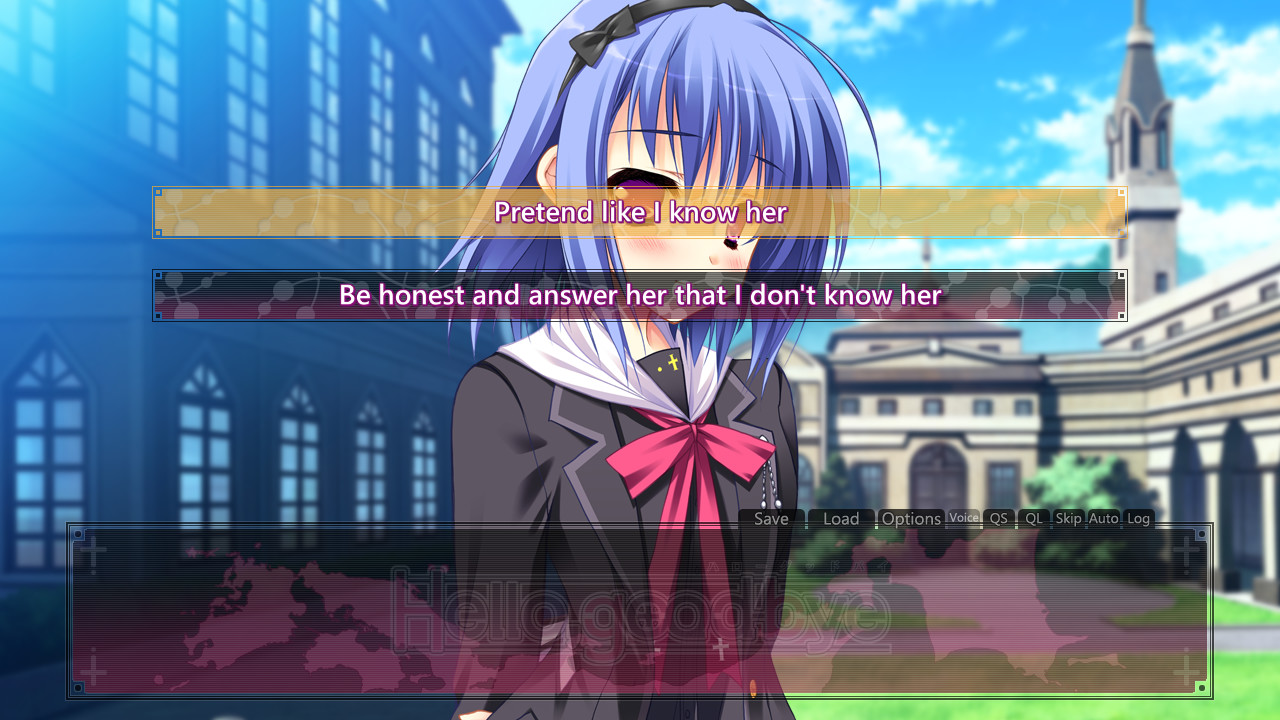 Initially, you have three routes available to you, but after playing all three, a fourth unlocks. Depending on the direction you go, many of the events of the story will remain the same, but start to diverge more and more as it gets further along with the story. You will see a few repeated scenes through the routes, but the text is unique for the majority of the routes, even for similar events.

The girl you meet in the flower field is May Yukishiro. Her overwhelming personality trait is that she is kind and helps anyone in need. She volunteers with refugees, waters the flower field and even helps you. Aside from this, she is somewhat of an airhead and shown to be from a rich family. I personally felt that she is a likable, but slightly bland character. That said, her route is interesting for reasons beyond her and it is important for starting to explain the reasoning behind the twist which ends the prologue.

The girl who claims to be your childhood friend is Suguri Saotome. She is a close friend of May and well-liked by the entire class. She is shown to be good at almost everything, including sports and academics. Friendly, outgoing but occasionally quick to anger, she is a more well-rounded character. I personally liked Suguri as a character and enjoyed her route, but it didn’t really feel too important to the overall story.

The girl who follows you around is Natsume Rindou. She transfers into the school soon after you do. You soon find out that she is a spy from another country, the Commonwealth. Admittedly, she is not a particularly good spy. She is shown to be oblivious about many aspects of civilian life and too earnest to be talented as espionage. Her route expands on some of the political aspects of the story. I enjoyed her as a character and I found the route interesting too.

The final girl is Koharu Hiiragi, who claims you are her brother (but makes sure to point out that you can see her as a woman). Koharu is extremely energetic, very clingy and is described in the game as being very sharp, but having a few screws loose in exchange. Due to certain story events, you never see Koharu after the prologue unless you are on her route and can only access it after completing the other three routes. Koharu’s route wraps up the story and it is only afterward that everything makes sense completely. I found that she was the most fun character and I was laughing at quite a few of her lines. The story of her route was fairly serious, so this was needed for balance. 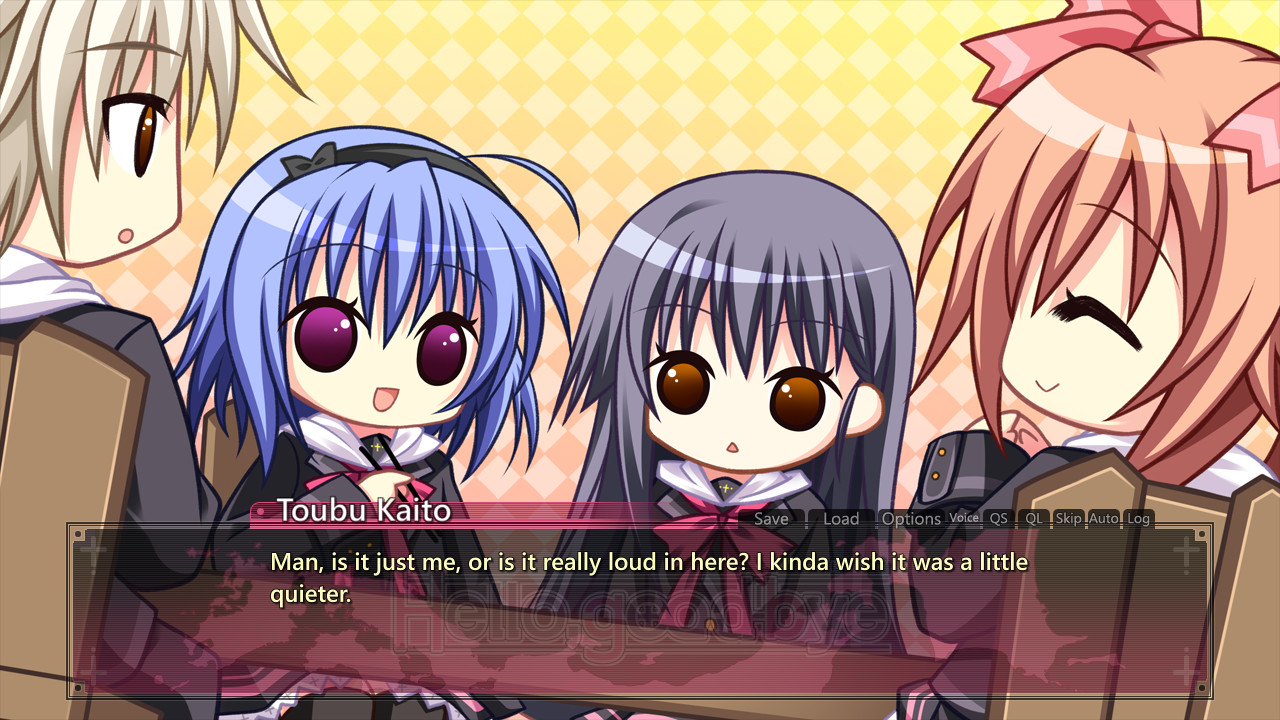 The other character of note is the main character, known as Kaito Toubu. Your character was found with amnesia years ago and joined the military at a young age. He is shown to be athletic and unlikely many visual novel protagonists, fairly decisive and shows disdain towards perverted actions.

There are a variety of other side characters, including Munenori Iwashimizu, the standard perverted side character. He is the founder of a club dedicated to deceptively big breasts hidden under clothing which make them appear smaller. Unfortunately for him and readers who follow his tastes, all the characters with adult scenes range between slim and extremely petite in one case. 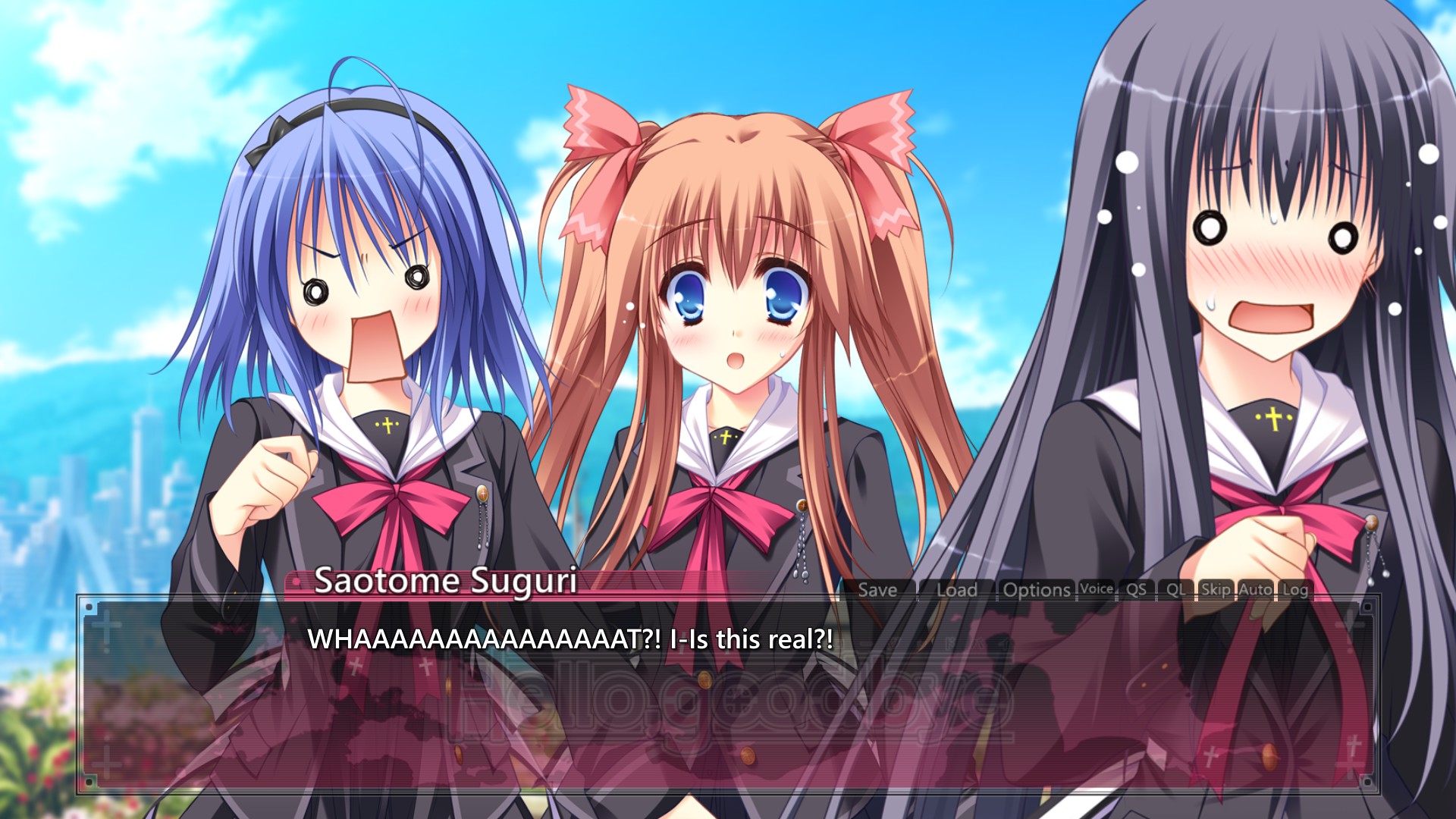 I personally took about three to four hours per character route, not including the prologue, which as mentioned took me two hours. This makes a complete playthrough take about fifteen hours. This was making use of saving at choices and skipping previously seen text.

I found all of the routes enjoyable either for the events, character or both but I found Koharu’s to be the best. Aside from Koharu’s route being locked, there is no enforced order. That said, while not too important, I would suggest playing May’s route first.

The writing and editing itself are well done, with very few occurrences of typos and formatting errors. The story is certainly confusing at times, but I believe it is intended to be so until the revelations and not a writing issue for the most part. There are a few things that we never get a completely clear answer on, but the plot is coherent and makes sense throughout – at least after finishing all of the routes.

One improvement I would have liked in the writing would be if the romances had some further development in all routes. The jump from stranger to a very close friend to romance felt quite quick. 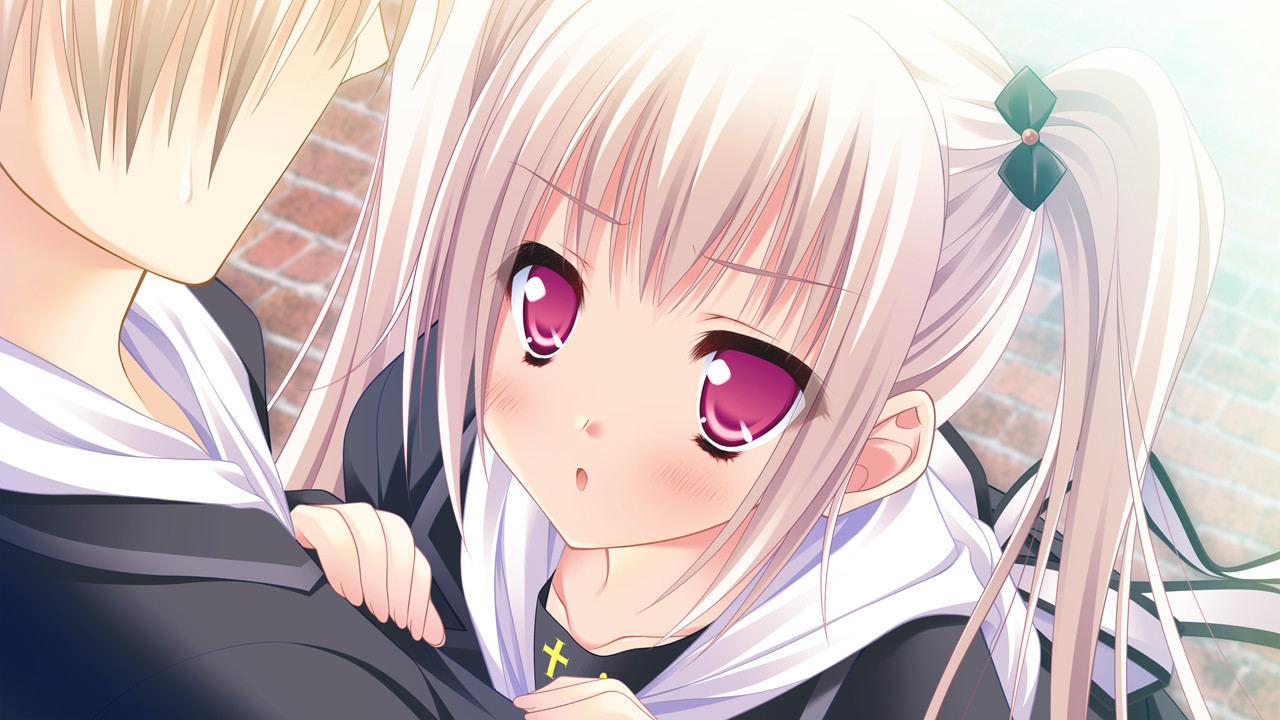 I found that the artwork is all to a very high standard and there are a reasonable number of regular CGs and super-deformed style CGs.

The music is well done too with a good variety of 30 background tracks which fit the scenes well. There are five vocal tracks in addition.

As a bonus, there are quite a few nice extra touches which aren’t really required but are always appreciated. The options are fairly robust, with individual volume controls per character, options surrounding character animations, options around notifications and more. There is also a glossary explaining many of the terms in-game, a bonus mini-game to find hidden cats in CGs and an inbuilt achievement system, which mirrors to Steam achievements if you own the game on Steam.

I would personally recommend Hello, Goodbye to visual novel fans who enjoy games with a character-driven story, a good amount of comedy keeping things light, but a serious plot in the background. All of the characters are likable, all of the routes are interesting and production values are high all around. It’s not perfect as mentioned, but I enjoyed my time reading it quite a lot.

Many thanks go to the publisher NekoNyanSoft for a review code for this title. Purchases made by Denpasoft links earn a small commission which goes to help supporting domain and server costs.