Nostalgia is a powerful thing. One only needs to look at the successes of games inspired by Mega Man, Doom, and Castlevania to see that people want retro throwbacks. They are forever drawn to their rose-tinted glasses – to a time long since gone by. Knightin’+ seeks to evoke these youthful pangs of joy, but serves more as a lesson on what not to do, as opposed to a fateful reunion between long lost friends.

Knightin’+ at its core is a homage to the NES classic: The Legend of Zelda, had Shigeru Miyamoto decided to remove everything remotely interesting about the game; leaving only the shallow, repetitive and massively outdated dungeons intact. The game comes across as self-aware, almost sentient. It’s conscious of the fact it’s a little bit naff. It tries to cover it up, by having a plot so tongue-in-cheek, its tongue actually bores out of the side of its face. There is no fourth wall, there is only dust. The plot is nonsensical, the humor on offer isn’t engaging, and the foundation the game is built upon is rocky at best. 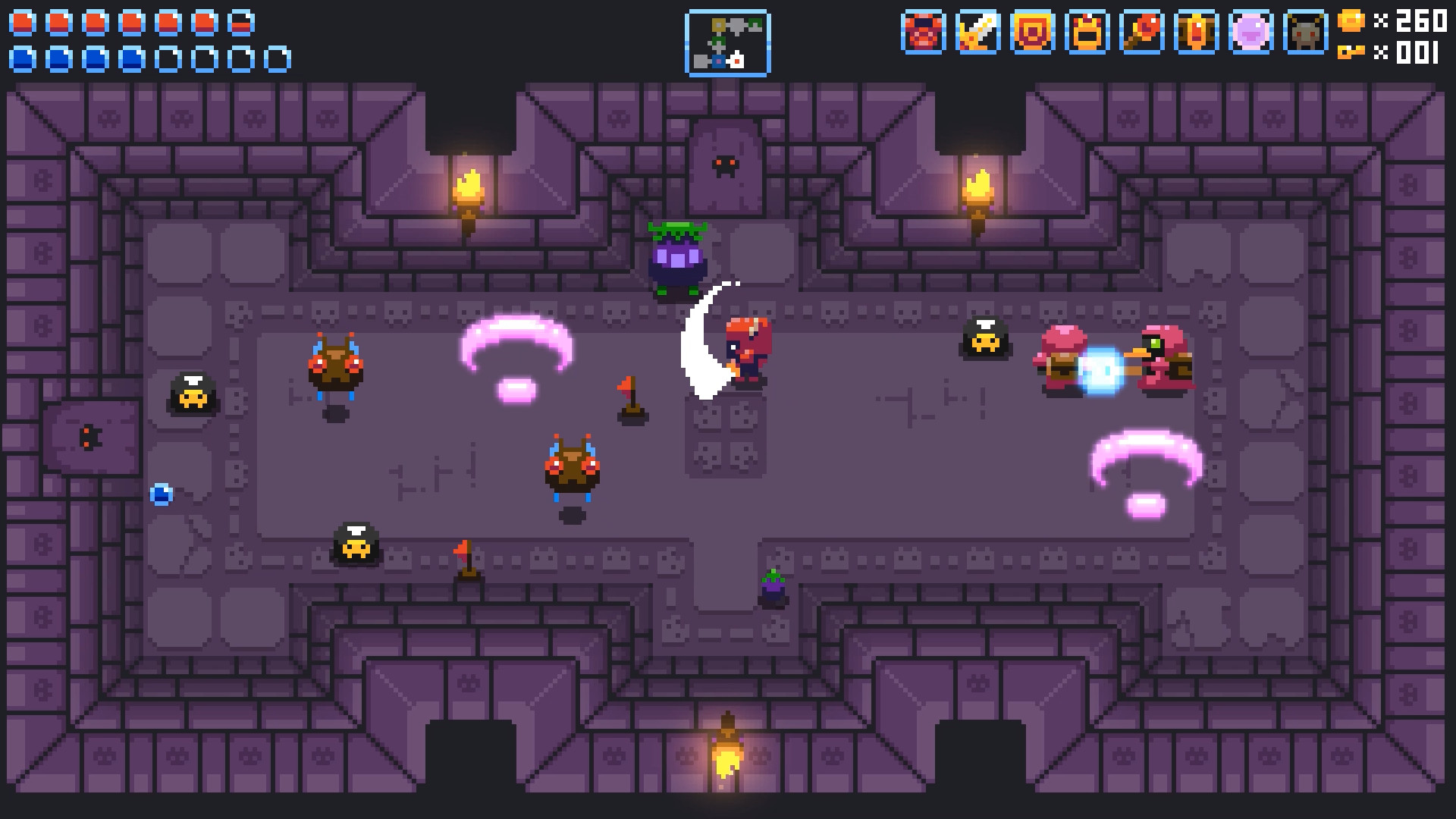 But let’s put all that doom and gloom aside for a moment. You play as a small knight who must dungeon delve his way through a variety of visually similar locales. In your armored gauntlet, you brandish a mighty sword, in which to smite your foes. As you explore each room of a dungeon, you will discover new items that expand your combat and exploratory options, as well as new enemies and bosses. Each dungeon is spread over multiple floors, adding a bit of nuance to its overall layout. You will often be required to go up, or down a floor briefly, to find your way to your goal, which is a nice evolutionary step. As far as first impressions go – outside of the eye-rolling narrative of course – Knightin’+ delivers. Those feelings are mostly fleeting however, as the core gameplay quickly falls to repetition.

Combat revolves around swinging your sword at braindead enemies until they die. There is little in terms of difficulty, making most encounters trivial time wasters. Puzzle-solving fares better but is limited to the same few puzzles recycled throughout a dungeon. Like with most of Knightin’+, these overstay their welcome and left me audibly sighing whenever I came across another variant. The unlockable items do their job of providing a greater variety of tools to tackle any given scenario. Their inclusion is certainly welcome, but they don’t do enough to cover the games gaping flaws. Bosses, however, are a genuine highlight. They play out like an intricate dance, tenderly spliced together with a puzzle. Whereas the game often feels quite archaic, the boss fights are decidedly more modern and are all the better for it. Actual thought has to go into defeating them, and I immediately sat up and paid attention the second I stumbled upon one of these behemoths. I only wish the process of encountering them wasn’t as mind-numbing. 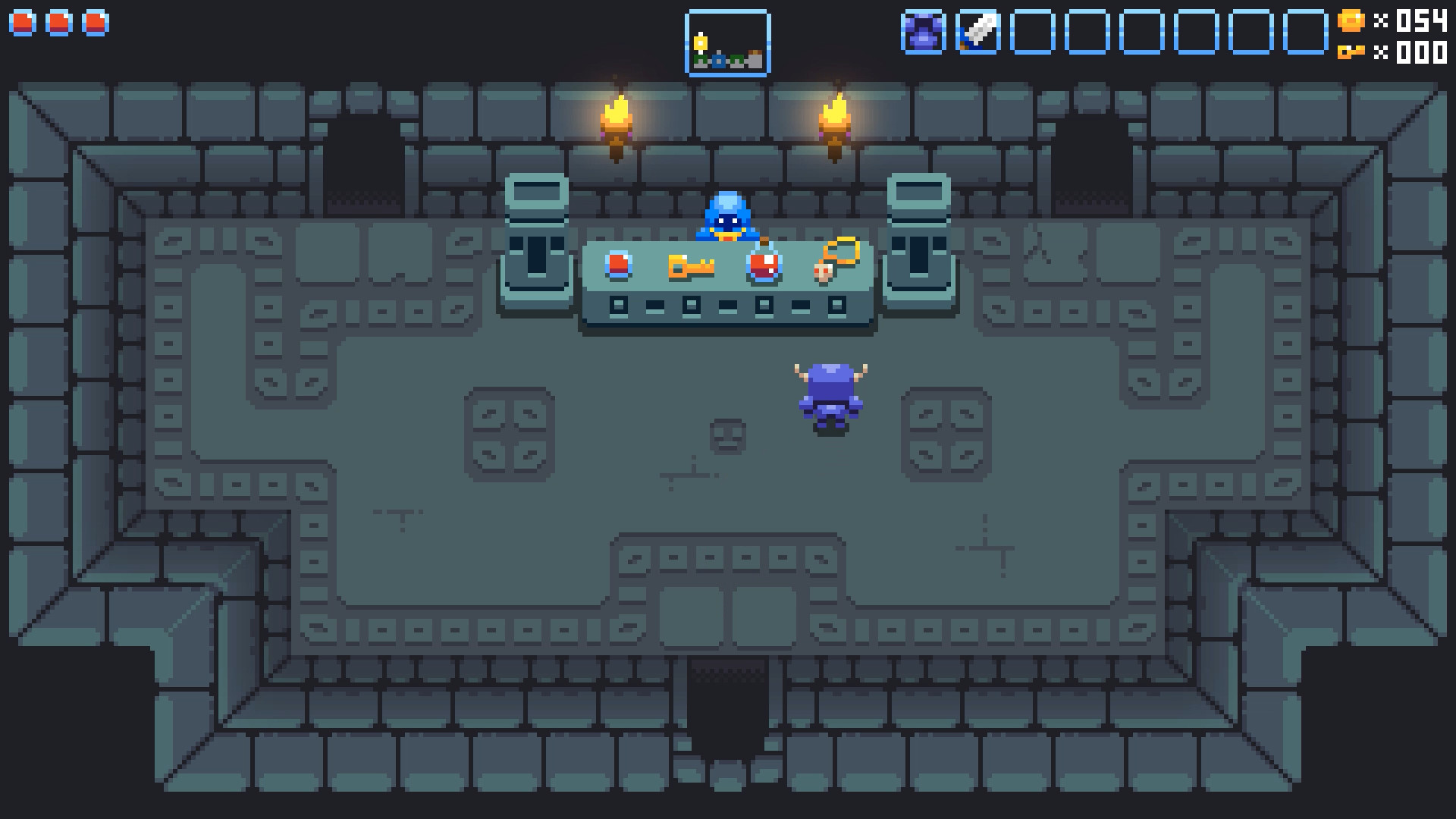 As if applying a fatal dose of Lidocaine to your cerebral cortex wasn’t enough, then Knightin’+’s presentation will ensure your brain turns off between boss-bashing. Whilst undeniably a prettier game than its 34-year-old inspiration, it has done very little to truly improve upon its NES roots. Rooms and backgrounds feel almost recycled from dungeon to dungeon, with only a palette swap to differentiate them. Enemy and character designs are top-notch however, with bosses, once again, taking the cake. These guys look fantastic with detail coming out of the wazoo, and special effects that really pop against the retro backdrop. I am a sucker for pixel art, and Knightin+’ does manage to provide the goods for the most part.

As far as sound goes, Knightin’+ hits a rather generic note. Music is typical of what you’d expect from a modernly-retro title, and sound effects seem to have been tailor-made to remind you of 80’s gaming. It is far from bad, it mostly just exists. Well, it exists until you turn it off – at which point, the memory of its existence fades into the abyss. 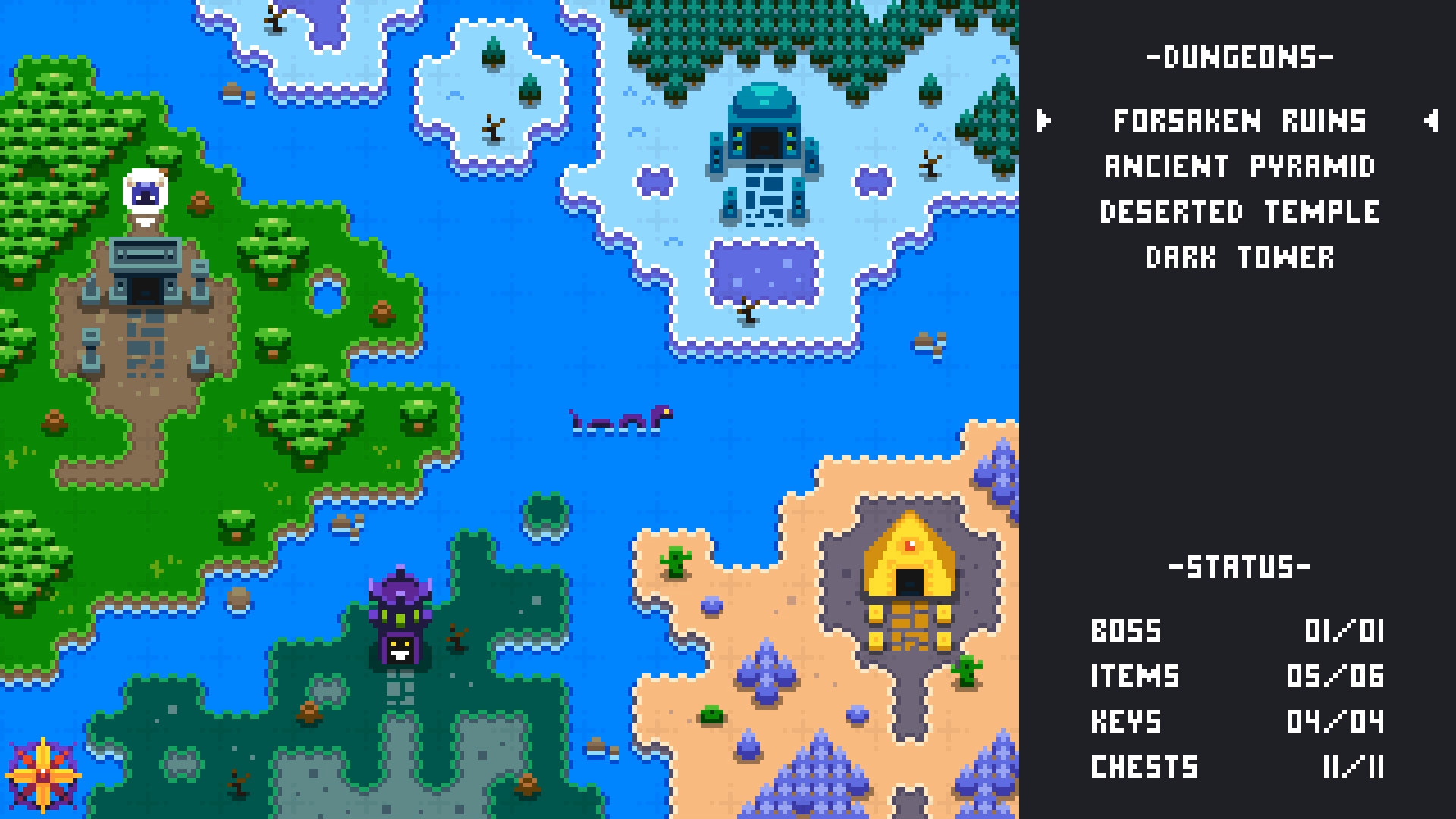 Knightin’+ is what happens when you remove everything defining about a game, and replace it with that game’s worst aspects. The Legend of Zelda thrived off of its open world, exploration, and secrets. The dungeons were only there to serve as a linear tool for progression and a general signpost to what you needed to do. They were not designed to be the focus of an entire game. Had they put as much effort into the core gameplay, as they did for the boss battles, this could have potentially been something great. As it stands, Knightin’+’s brief moments of genuine fun, are simply not worth the slog to get to.

Knightin’+ can be bought digitally on Steam as well as the PlayStation 4, XBox One and Nintendo Switch console stores. But if it doesn’t count like your cup of tea, perhaps check out Total Party Kill – another retro-inspired game.

Many thanks to Ratalaika Games for the review copy.

Forged in the rainy wilds of northern England, I carved a path of mediocrity through generations and genres. My play style is often described as: “optimistically awful”.

Action All Games All Posts Shooter

At the penultimate moment of the war against Nazi Germany, with victory near at hand for the allied forces, we learn that Hitler has one more trick up his sleeve – he uses occult techniques to raise the dead. The war rages with the land overrun by zombies, until Hitler’s defeat by a group of […]

The Last Birdling is a Western Visual Novel/OELVN and the seventh created by InvertMouse. This title is only available on PC. Rather than the typical romance which visual novels often focus on, this is a story of an unlikely and forbidden friendship. In this world, a species of winged humanoids called Birdlings used to fill […]