Project Nimbus: Complete Edition is an anime-themed mecha game, inspired by titles such as Gundam, Macross, and the Ace Combat series.

The Complete Edition of this game is only available on the Nintendo Switch, but other versions of Project Nimbus are available on Steam (PC) and PlayStation 4.

Edit: The complete edition has since been released on Steam (PC) after the original publishing of this review. Screenshots have been updated to PC version.

In this game, the player controls their ‘battle frame’ and takes part in mecha dogfights, shooting and slashing others out of the sky with a variety of weapons. You fight a variety of enemies with their own specialties and the occasional boss enemy.

You find yourself in a futuristic world, where the planet has been ruined. Many of the survivors now live in floating cities among the clouds. The world has split into two superpowers at war – the CFN, which is basically the United States and the UCN, which consists of China and Russia. War is now fought with battle frames – mecha with human pilots. 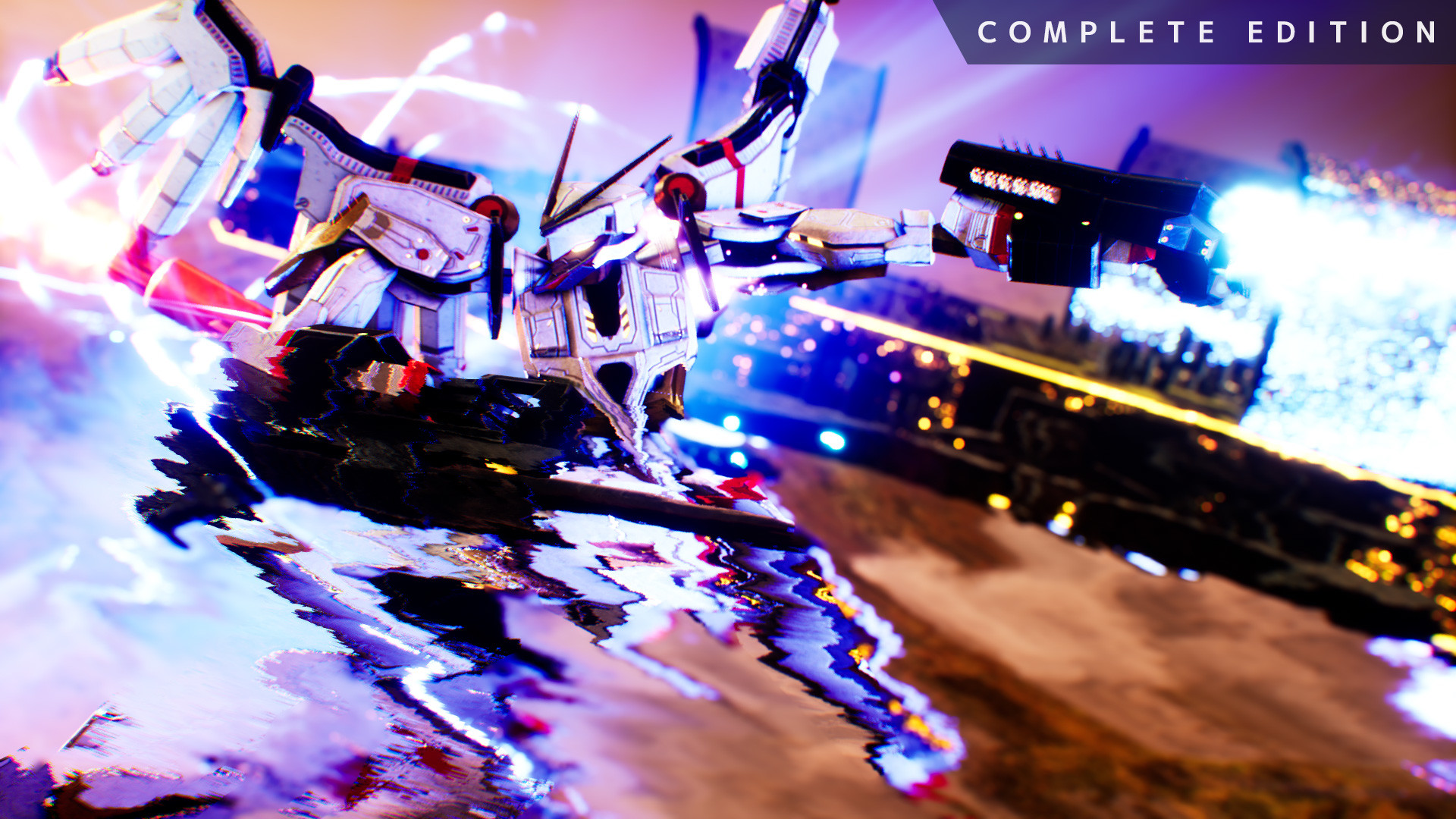 There are three modes to play in this game. The campaign mode which tells the story of the game and includes twenty-six missions to complete is the main feature. There is also a survival mode where you can fight waves over six maps to see how long you can survive and warfront mode which includes six different types of missions, earnable currency, ranks to unlock and customization of your battle frame.

The story uses this setting and themes of young pilots who only wish for peace, differences between the rich and poor, a third faction outside of the superpowers and generally feels like it was inspired by the Gundam series more than anything else.

I personally felt like the story was the weakest aspect of this game. The story itself is told mostly through voiced dialogue between missions, with some additional chat during battles and optional audio logs. Unfortunately it never really seemed to explain the story well. Background information about the characters and the world was never really mentioned in detail and the story wasn’t really structured well. Generally, the story felt fairly generic too, as nothing about it really stood out from anime titles with similar themes. That said, it suffices as a background and gives you a reason to go forward and complete the missions.

The gameplay is the aspect which makes Project Nimbus worth playing. Controlling the battle frame is fairly intuitive and the flight controls are generally very well done. They are incredibly responsive, so you can make quick dodges, boosts, and turns. The only exception is rising and lowering your battle frame, which uses the X and B buttons. This can feel somewhat awkward and interrupts the flow of battle at times. 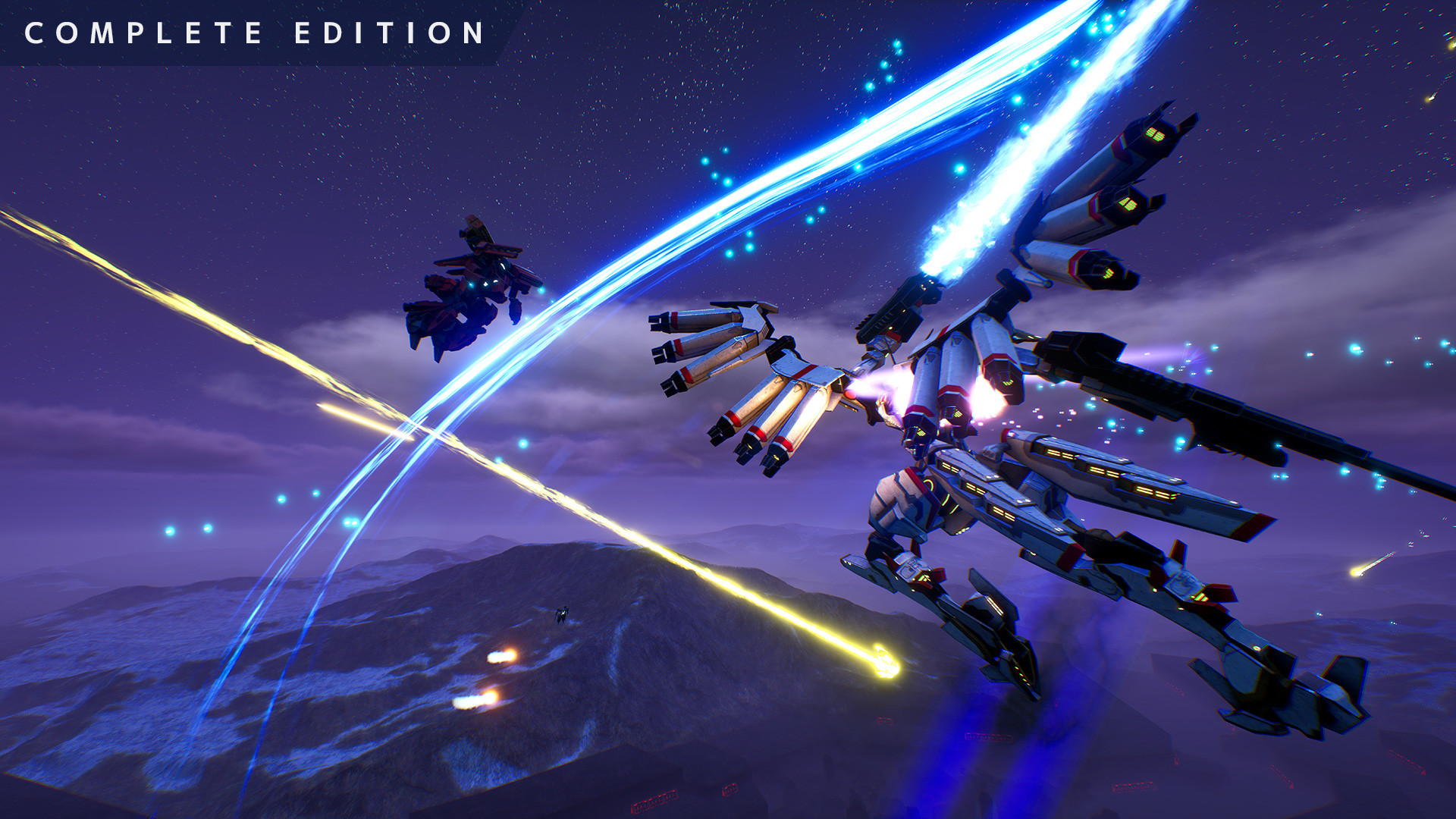 Depending on the battle frame and mission, you can use several weapons including a rifle, a railgun, guided missiles, decoys, flares, a melee attack and more. The weapons allow you to fight in a variety of situations and I found myself changing between them depending on the situation, rather than just spamming one which happens in many other games.

You can manually aim your ranged weapons, but most of the time players will lock-on to a target which will provide an auto-aim if you are facing in the correct direction. Melee is also done by locking on, then pressing a button which will rush you towards the enemy target. Reloading is also done automatically but has an option to manual reload too.

As well as a good range of weapons, there is also a huge range of battle frames to play as. These are all slightly different in how they play and appearance. You can see these even from the start in the survival mode.

One aspect which impressed me was the options and customization provided. There are three difficulty modes with the casual mode allowing constant auto-aim and health regeneration. You can change both text and voice between English and Japanese. Modes are all open from the start too.

I previously mentioned the warfront mode. This is where I imagine many players will spend much of their time. Ranking up, upgrading your battle frame and fighting on was the part of the game I enjoyed the most.

Graphically the game is decent. It didn’t blow me away, but everything looks good enough and fits the theme and world. I didn’t experience any technical issues here either. Oddly the screenshots look slightly grainy, but it does not appear as such in-game.

As far as the sound goes, the voice acting is actually done surprisingly well for such a small title and I enjoyed the background music. The weapon sounds never seemed too noticeable, which threw me off a bit. That said, there are so many weapons flying around it may have become overpowering.

Overall, this is quite a fun mecha game and budget priced. The story was disappointing, but the gameplay was better than I initially expected and worth praising. The several includes modes give you quite a few ways to play and it works well on the Switch too, as missions can be played in short bursts. As long as you’re just expecting a fun time flying around and shooting down enemies, I’d recommend this game.

This game can be bought digitally on the Nintendo eShop.

Many thanks to the publisher for providing a review code for this title.