For a year and a half, I’ve followed this game quite closely. My obsession for it came about once I heard it’s inspiration. See, growing up, I was a huge Mega Man fanboy. However, there was always a certain spin-off that escaped me. One Step from Eden is inspired by the Battle Network titles. No, wait, that’s not exactly accurate. It’s specifically inspired by the battle system. It’s a deck-building rogue-like action game with light RPG elements. I’ll be honest, I wasn’t sure what to expect when I requested this. Based on the praise the PC demo received though, it seemed like a great time was in store. Boy, I was not ready. One Step from Eden isn’t for the faint of heart.

UPDATE:
I HAVE BEEN IN CONTACT WITH THE DEVELOPER. HE’S INFORMED ME THAT ANOTHER PATCH IS COMING TO ADDRESS MOST OF MY COMPLAINTS ABOUT ONE STEP FROM EDEN. DUE TO THIS FACT, I CAN ALSO RECOMMEND THIS FOR THE AVERAGE GAMER. I CAN PLAY IT NOW, SO. FAINT OF HEART – REJOICE!

Allow me to preface this by outing myself. I was horrible. In fact, after 20+ hours, I had only unlocked a single costume and some new ability cards. 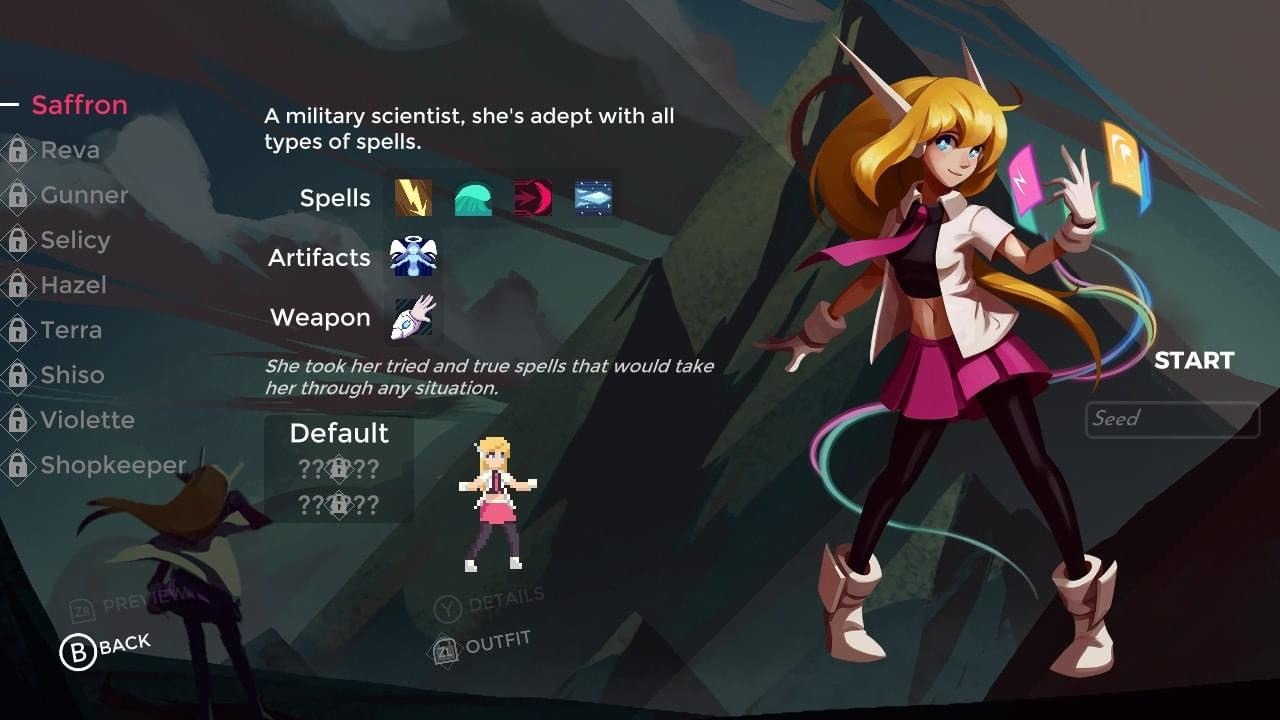 Essentially, One Step from Eden is a continuous stream of the Battle Network combat system, while also increasing the difficulty. For those unfamiliar, you’re confined to a 4×4 grid, as are your opponents. Your aim is to defeat them. As you execute a spell, you’ll notice a mana bar. This is because they require a certain amount of mana to be used. In other words, there’s a – albeit minor – strategic way of going about it. Now, in order to target a certain enemy, a black reticle will indicate whom it’ll hit, unless it’s otherwise specified on the ability card.

Okay, so where’s the insanity?

Speed. Not the drug, but unbridled speed. Everything moves at a rapid pace. I couldn’t keep up. I’d quickly become overwhelmed and pummelled. While I do appreciate a good challenge, I felt that One Step from Eden expected far too much. Between having to dodge, line up my spells, my positioning, and the abilities that queued up, it was too much. I failed. The accessibility of the game is quite limited in this regard. At 31, my coordination in rather poor. Couple that with my disability, and I struggled to do the required multi-tasking and snappy decision making. The difficulty spike wasn’t a curve, but instead, a steep incline up. I feel this cuts an already niche fandom in half, and that’s really not good. 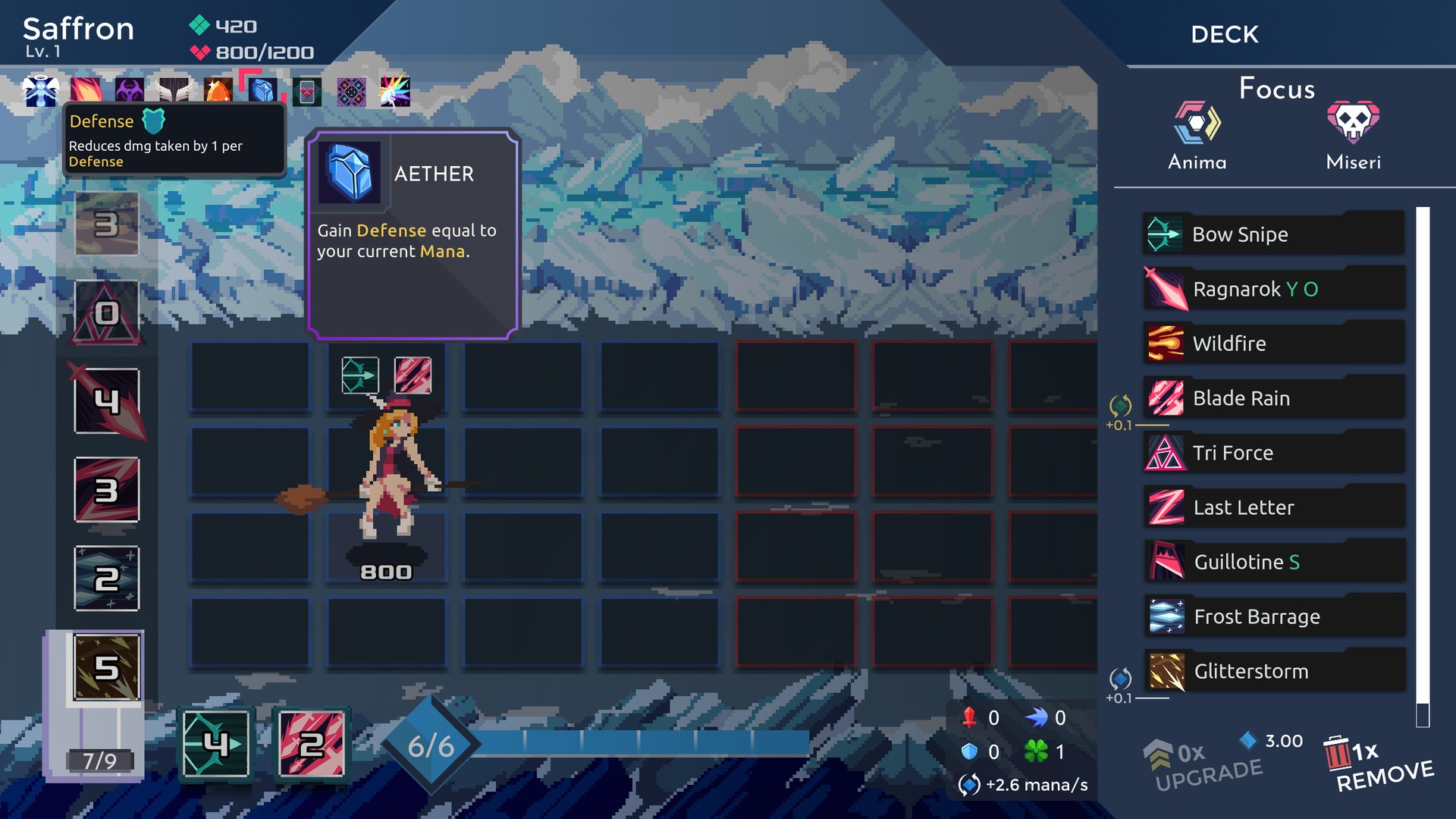 For those familiar with rogue-like, every failure in One Step from Eden will restart your progression. The RPG elements I mentioned at the beginning kick in here. Depending on how far you’ve gotten, you receive an amount of “experience”. This will make you level up, unlocking new abilities, as well as artifacts. These grant perks that are permanent throughout a given run.

Battling itself is convoluted, so bare with me. By default, your character will have a set amount of skills. Usually four. After each stage, you’ll be able to choose between three new abilities. On some occasions, also artifacts. Spells are represented as cards, and as a collective, they’re known as a “deck”. During combat, two will be queued up to either the “A” or “B” button. Any extra will be off to the side. With each one you cast, these will funnel into either “A” or “B”. Here’s the issue. Casting a spell triggers a cool down. Using up all available abilities you have triggers a cool down. Waiting for mana to regenerate to allow you to use an ability is considered a cool down too. Starting to see the problem? 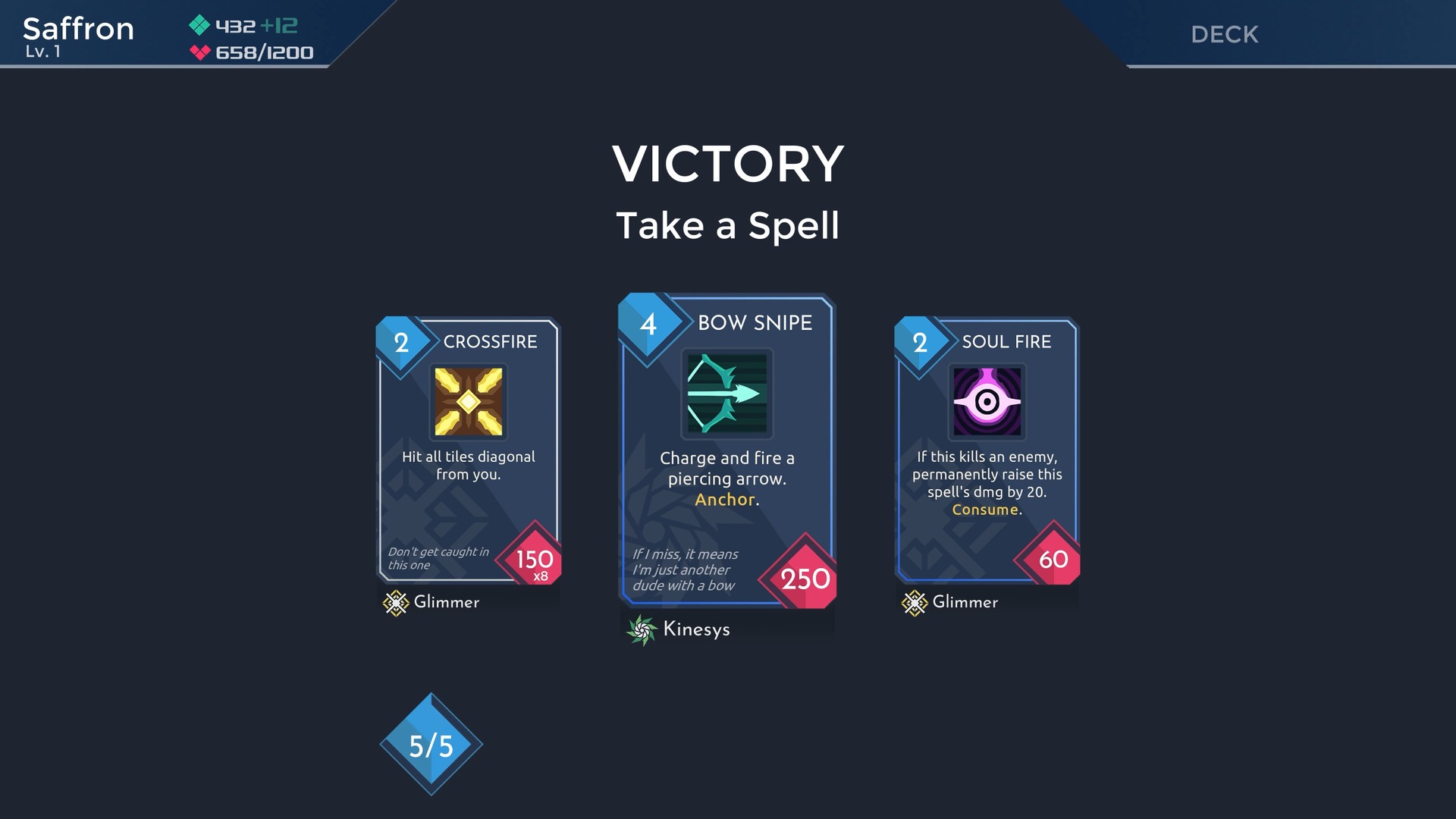 I felt like the game was actively trying to slow me down in an already fast paced game. On the bright side, there’s a secondary weapon. It’s continuous too, but agonizingly weak.

I do commend the ambition though. It’s abundantly clear that the developer Thomas poured his heart and soul out. This much is shown by the sheer number of abilities available. I believe it’s 250+. Each of which can be upgraded. However, this exposes the biggest issue. Because the RNG will sometimes give you weak abilities that don’t work well together, your run is over before it begins. Your default abilities are decent enough, but they won’t take you far alone. Ambition has to be One Step from Eden’s biggest adversary.

In terms of stability, this wasn’t far from being a perfect title. However, a minor hiccup prevents it from being so. During my gaming sessions, I noticed that the screen froze at random moments. Do be assured though, it never lasted long. About half a second. If I had to wager a guess, the culprit was the particle effects of abilities. With the chaotic nature of the game, once certain spells are used in conjunction, the Nintendo Switch freaks out. Fortunately, I never felt it interrupted anything. It was merely an annoyance.

The animations, on the other hand, were well done. Everything functioned and flowed seamlessly. From the wraiths swiping at you with their scythes, to the way orbital beams struck the enemy grid. This honestly made me forget that one man programmed this all. A man that’s probably younger than I.

What am I doing with my life?

Several people tend to judge a game based solely on looks. They deem it uninteresting when in fact, it might pack in tremendous fun. A case that could be made for One Step From Eden.

The game utilizes the classic pixelated style. Having grown up when games were still in their infancy, I appreciated this. While the colours are a bit muddy, it blends nicely with the background. Even the jagged edges of the sprite. This little detail makes me believe this is a love letter to the 90’s. The overall presentation is just very reminiscent of it. Even those slight animations I made mention of earlier. While some might prefer a tighter sprite, lets not forget how jarring high res models on a low res background can look. Right, Dead or School?

The “world map” isn’t your typical one either. Instead of a sprawling utopia, it’s a simple line graph. Mathematicians rejoice. Each event you’ll encounter is represented by icons. For example, a pair of swords indicate battle, while a campfire provides healing. It’s a very simplistic look, but one that I felt wasn’t even needed. You see, I looked into the PC version and noticed a big difference. Instead of returning to the graph after each battle, the PC version had a smooth transition, never leaving the battle screen. As for the line map, it had been relegated to the corner. It’s definitely a nitpick, but a change I feel would heighten the experience. As is, I feel it needlessly cuts up the action.

The character art, on the other hand, is beautiful. The amount of passion poured into it was really quite evident. The way the colours all popped. The level of detail. It was all so vibrant. Just a shame there’s no in-game gallery. I feel in a game such as this, it’s something that would have been cool.

Also yes, I found some of the girls to be rather cute. Don’t @ me.

I loved the sound design. Each defeat packed a mean punch. Because of the play style of One Step from Eden, the only music I’m looking for is something that’ll pump me up. Something that’ll get my blood racing. That’s exactly what it does. The best way to describe it is techno. If you’re into trance music, highly recommend hooking it up to a device that can harness the bass. You won’t regret it.

One Step from Eden is for those seeking a challenge. It’s for those with quick reflexes, and can think on-the-spot. Every enemy can move quickly. However, in those rare times I’d hit a hot streak, I was doing really well. I think that by lowering cool down rates, it would be immensely helpful. I don’t play games to be frustrated. I want to have fun. This was usually not fun. One Step from Eden has accessibility issues. The lack of difficulty levels meant I was stuck, despite constantly failing. If I wanted to play, I had no choice but to suffer. I think by adding in an easy or normal mode, it would alleviate this tenfold.

It’s not all doom and gloom though. The abilities and animations are all well done, but the particle effects do cause a brief freeze. It was never an interruption, just an annoyance. Unfortunately, it’s the over ambitious vision that bogs down the game. Too many abilities, unavoidable attacks that inflict massive damage, and healing is pointless. Enemies eat through it like that, despite there being several opportunities for it. Balance is One Step from Eden’s other weakness.

With all this said, I do still think the specific target audience will adore this. They’ll eat this up. I’ve seen crazy coordination from people in games. So, perhaps this is best suited for that niche. It’ll provide a great challenge. For the average gamer though;

ONE STEP FROM EDEN IS NOT RECOMMENDED

For the specific niche, however;

ONE STEP FROM EDEN IS RECOMMENDED

Also, shout to Thomas for focusing on the battle system. Made me cut down my reviewing template. Thanks!

One Step from Eden can be bought on Humble Bundle or Steam for PC. It can also be bought digitally on Nintendo Switch from the console store.

Many thanks to Thomas Moon Kang for the review code.